Shiller said the other day that the market can go up 50% from here. OK, so I fell for it and clicked to watch the CNBC video. This was sort of a surprising comment coming from the creator of the CAPE ratio, one of the main indicators bears use to argue that the market is way overvalued.

Of course, this is not Shiller's forecast or expectation. In fact, he says that this is very unlikely, but it is possible. His point was simply that the CAPE ratio is 30x now, and in the 1990's it went up to 45x. So if that happened again, that's a 50% increase.

This is totally possible, especially now. I would not invest in the market with that expectation, of course. Actually, I would invest with the opposite expectation (when pressed, Shiller said the market is more likely to go up 50% than down 50%).

We keep hearing from the bears that the market is as expensive as it was during previous peaks, so we are in dangerous territory; they say we are in a bubble.

OK. That is possible.

But in previous posts, I argued that if 10 year rates stabilize at 4% over time (it's at 2.3% now), it is possible that the market P/E can average 25x during that period. Maybe the market fluctuates around that average, so the market can easily trade between 18x and 33x P/E without anything being out of whack. (Buffett also said at the recent annual meeting that if rates stay around this area, then the stock market could prove to be very undervalued at current levels.)

So we have a problem. This 18-33x P/E range puts the market in bubble territory according to the bubble experts. But we are saying here that if rates stay at 4%, that's the normal range the market should trade at.

So then, how can we tell when we are in bubble territory?

Since we are using interest rates to value the stock market, we will have to interest rate adjust our bubble levels too.

Interest Rate Adjusted Bubble P/E
So just looking back at 1999 and 1987, here are the indicators at the time:

Using this spread, long term rates would have to go up to 7-8% for me to worry about an overstretched rubber band snapping.

How about the stock market? How high would it have to go before I think we are really in bubble territory?

Using the current 2.3% 10-year rate, earnings yield would have to get to 1.2% for me to really think that maybe we are in a stock market bubble.  That comes to 83x P/E!  At that level, trust me, even I won't be talking much about long term investing, and would probably be net short with a bunch of put options too.

But wait, let's not use 2.3% because we all know that's too low. Let's use my normalized 4%.  Even with a 4% bond yield, earnings yield would have to get to 2% to be considered really bubble level.  That is a P/E ratio of 50x.   That's more than a double from here.

So for me, the market would have to actually more than double from here before I see it as really bubbly. (If you want to see what a real bubble is like, look at Bitcoin!)

Narrow Market
The other thing I hear a lot is that the market is up only because of the very few hot tech stocks like the FANG stocks. They make it sound like the market would be doing nothing without them. Maybe.

But just as a quick check, I compared the S&P 500 index (ETF: SPY) to the S&P 500 equal-weighted index (ETF: RSP); the super-large caps would have no more impact than the smallest S&P 500 companies.

Check this out:
(The blue line is the RSP, green is SPY) 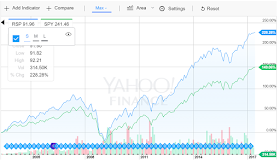 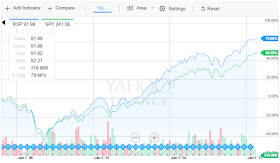 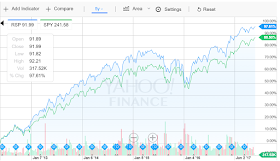 In all of the above time periods, the RSP outperforms SPY, which I don't think would be the case if it was only a few of the super-large caps that is pulling the S&P 500 index up. 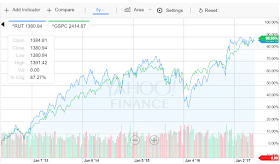 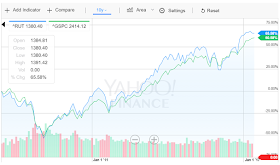 Here too, I don't see the S&P 500 outperforming in a big way lead by the supers.  To the contrary, the S&P 500 index is behind the Russell in the 10 year period.

I had no idea what I would see when I put up these comparisons. Looking at them now, I am a little disappointed in active managers who claim that they are underperforming because they don't own the FANG stocks; the above shows that maybe that's not the issue.

Conclusion
All of this stuff, I just do sometimes to satisfy my own curiosity; not to make any claims either way. I have no idea what the market will do, but I don't believe we are in a stock market bubble at all. OK, if interest rates got up to 7-8% and valuations are still here in the 23-24x P/E area (trailing basis), then yes, I would agree we have a valuation problem.

Otherwise, it would take a market P/E of 50-80x for me to think we are in a stock market bubble (and I would put on shorts and load up on puts! But even then, I wouldn't expect an immediate payoff. If the market took off like that, it would be very hard to pick the top).

Otherwise, we are just, in terms of stock market valuation, in the "zone of reasonableness", to borrow Buffett's phrase from a few years ago.

Also, keep in mind, this 50-80x P/E ratio range is not a target, of course. That's where it has to go before you convince me we are in a stock market bubble.

Also, this doesn't mean the market can't enter a bear market at any time. There was no interest rate / earnings yield rubber band in 1929 and 2007.