This is a post I wrote up a while back and never published as Kraft/Heinz and other things happened.  Anyway, here it is:

In December 2011, Leucadia (LUK) bought 79% of National Beef.  They explained the purchase as a play on the rising consumption of protein around the world as incomes rise in emerging economies (as poor countries get richer, they eat more meat).   Most important, though, is that they liked the management.

From the 2011 LUK letter to shareholders (still Cumming/Steinberg):


As our faithful investors know well, we have long watched and commented on global commodity consumption patterns. We continue to believe that as citizens of historically poor countries get richer they will demand higher quality items . and more of them. We believe this thesis is applicable to global protein consumption. While protein production and consumption in the U.S. is a mature market and is not growing, global protein consumption is growing at an astounding rate. U.S. beef exports were up over 22% in 2011 vs. 2010. This is an impressive number, made even more so by the fact that the U.S. is not allowed to export beef directly to China . not yet, anyway.

and then after some detail about National Beef, they conclude:


In October the number of people on the globe reached 7 billion and is expanding exponentially. Humans need protein, we have it!

We would not have made this investment were it not for our belief that we have the best management team. Tim and his management team are widely regarded as the best operators in the industry and we have confidence that these seasoned beef executives will guide National Beef through the inevitable rough patches.


Also, at the 2012 annual meeting,  Steinberg said that the LUK portfolio was geared for inflation, and that if you don't believe inflation is coming, you should sell LUK stock.   Well, he was certainly right about that.  Inflation hasn't come yet and LUK stock also has done nothing since then.   I think for LUK, this "protein trade" sort of fit into that scenario.

And just as a refresher, here is a spreadsheet I put together at the time showing what the National Beef business was like:


I only put this here for reference, so hold this thought for a second.


Seaboard Corp (SEB)
Anyway, at the time we looked at another protein play.  Check out the original post.  National Beef hasn't been doing too well, but SEB has been doing really well.  Here is an update on their long term performance:


(ROE is return on beginning equity)

And in the original post, I compared SEB to BRK and the S&P 500 index (total return).  Since it's good to look at things through cycles, I used December 1999 as the starting point as that was sort of a big, major top.  I think I used the end of 2000 last time, but here I changed it to 1999-end. 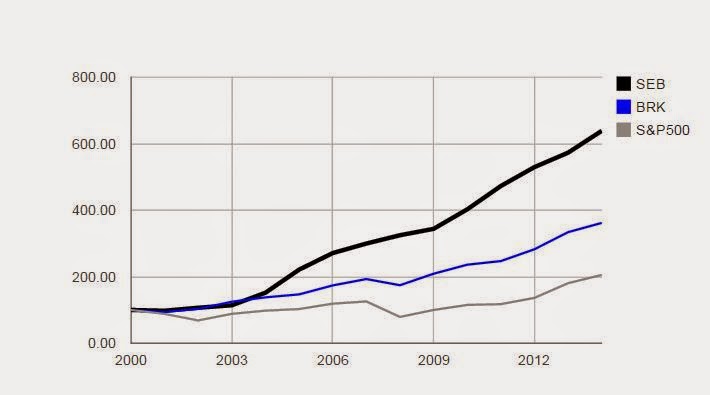 SEB has done really well and has continued to outpace the market and BRK.

Here is the performance over various time periods:

SEB and BRK are annualized changes in BPS, and yes, I know the BRK BPS growth rate is understated.  Look at the performance from the two peaks, 1999 and 2007.  Good stuff.

BPS?!
There is a question as to whether SEB can be valued using book value.  Typically, operating companies like this are not valued using book value.  But I found it to be a convenient measure for SEB because they seem to operate as more of a capital allocating conglomerate like some of the others we talk about here.  SEB has evolved over the years by buying and selling businesses so it seems like a good idea to see how value has been added over the years.

Also, the businesses they are involved in seem to be cyclical so it's hard to take any given year's earnings and slap a P/E multiple on it.  If we see some consistency in ROE or growth in BPS over the years, it would be easier to value the whole based on that; what kind of ROE or BPS growth have they achieved in the past?  What is a normal rate of growth through cycles?  What is a normalized earnings level based on current equity capital?  And then what kind of multiple can we put on that?  Or what kind of multiple to BPS is fair for the business?

So anyway, there are a lot of ways to look at this, but BPS for me seemed like a good way.

The short term returns above (one year and five year BPS growth) is higher than BRK's BPS growth but lower than the S&P 500 index total return.   As many have pointed out (to explain their own underperformance), that is due to the S&P 500 index coming back from a crisis low.

On a ten year basis, SEB has done really well compared to both BRK and the S&P 500.  SEB lags BRK on the measure starting in 1989, but not many can outdo BRK over that long a time period.

So What's it Worth?
SEB's biggest business is the pork production and processing business.  My impression has been that this business doesn't usually carry a high multiple.  Smithfield Foods was taken out in 2013 at 9.4x EV/EBITDA and 14x EBIT (using the announced $7.1 billion figure).

Here is the table from the August 2013 Smithfield merger proxy showing valuation of listed comps:

The bankers concluded that 7-8x is a fair multiple to use for Smithfield.

Hillshire Holdings was acquired by Tyson last year for 16.7x ttm EV/EBITDA, but (according to Tyson) 10.5x ttm EV/EBITDA if you include $300 million in expected synergies.

Let's look at some metrics of Smithfield and Hillshire:


Now go back and look at the spreadsheet for National Beef at the top of this post.  You will see that margins in this business tend to be really low.  Even for companies with value-added products like Smithfield and Hillshire.

Now look at the metrics for SEB's pork segment:

SEB Pork Segment:
This is segment information from the 10-K, so there would be other costs not included here (corporate).  So this may not be directly comparable to the above comps.  But if you take the unallocated expenses (corporate expense not allocated to any of the operating segments), it still amounts to less than 2% of the sales of the pork segment.  So if you allocated ALL of that corporate to the pork segment, it will reduce margins in 2014 by 2%.

OK, so I was working on this post before I wrote up the stuff on MKL.  But I was sort of thinking the same thing in evaluating MKL.  Why not use some sort of valuation matrix by taking some normalized level of earnings and some sort of earnings multiple on it?   Another way to look at it is to look at SEB as a sum-of-the-parts of the various segments, but you will notice that each segment tends to have volatile earnings so it's hard to see what a normalized level of anything would be.

So I figured looking at the whole might be easier.

Going back to the above long term performance table, you will notice that since 1989, SEB grew BPS at 12%/year.  This is the same as ROE (return on beginning equity, in this case).

Judging from the long term performance, it's probably pretty clear that 1.0x - 1.2x BPS is pretty cheap.  Five and ten year growth in BPS has been 13% and 15% respectively.

So let's say a long run, normalized level of earnings at SEB is around 12% ROE.  And then let's say that SEB has such a great performance that it should trade at least as high as what the average U.S. company has traded at over time (14x P/E).

Pulling out the valuation matrix, we get:

1.7x BPS might be a fair value of SEB if it continues to earn 12% (or grow BPS by that much) over time and it trades at a long term average multiple of U.S. stocks.

If SEB trades at it's own five to ten year average multiple of 11x and continues to grow BPS at 12%, then it's worth 1.3x BPS.

SEB closed yesterday at $3,670/share, or around 1.6x BPS.  It's seems a little high on a historical P/B basis, but if SEB's performance since 2004 is structural and not cyclical, then it is possible that SEB trades at a higher P/B in the future.

The sharp rally in 2014 was probably due to the abnormally high profits they earned in the pork segment (due to spiking prices caused by the pig virus), and also probably as a Cuba play.  SEB may well benefit from any increasing trade with Cuba (Marine segment) but who knows.

Conclusion
SEB is doing well.  Some short term factors may have pushed the stock price up too much, but looking at the tables above, it looks like there also may be a reason for SEB to trade at a higher valuation over time than before.  It does seem to be a higher quality business than some of the comps.
Posted by kk at 8:07 AM 19 comments: