Who Cares What Mr. Market Thinks!

So, the market has gone crazy. People ask me about the market and the impact of the COVID-19 and I keep saying it doesn't matter. But with the market acting like this, it's hard for people to agree with me. The markets make the news, the market creates the sentiment etc.  and I can't fight that. That's OK, as it doesn't really matter to me.

But I had a really interesting conversation recently, and I did some illustrative work and thought it was interesting so decided to make a post about it.

Every time people worry about these things, whether it's a trade war, Brexit, 9/11, fiscal cliff, coming recession/depression, war or whatever, I say the same thing. If something is not going to have a long term impact on the intrinsic value of businesses, it doesn't matter.

I think most will agree that COVID-19 is temporary. We just don't know how bad it's going to get before we get it under control (I still think there is way more COVID-19 even here in NYC than anyone thinks, because frankly, people are just not being tested. Plus I don't think the government is going to be truthful about this; I was living in Battery Park City during and after 9/11 and the EPA lied to us about the safety of the air. Christy Whitman admitted she lied to us about the safety of the air (she denies knowing the truth at the time, but I don't believe that at all). Forgot who, but someone said that the government had to balance the risk of causing a panic and the abandonment of downtown NYC (to the detriment of real estate prices downtown) with the 'minor' risk of people getting sick from inhaling toxic fumes. This is especially true when the known risks were also known to be far off into the future, long after elected politicians are out of office (so won't need to take any of the heat). So this was not really about public safety but more about social control.  Not that different from China, are we?)

But in my recent discussion, I had trouble getting across that the intrinsic value of the restaurant is not going to be impacted by the coming hurricane. Yes, they will lose business, and will probably have to repair some damage (even though that should be insured).  Of course, in the hurricane example, there is a possibility that it wipes out the whole beachside town and it takes years to rebuild. But most market exogenous events in the past ten or twenty years weren't of the magnitude to destroy everything (in aggregate) for years.

Current P/E
So when I say it doesn't matter about COVID-19, I don't mean to say there will be no impact. I just mean that there is no impact on the intrinsic value of businesses in general 5, 10 or 20 years out.

If people value stocks on current P/E ratios, then yes, there will be an impact on stock prices. If you value a stock at 10x P/E and think it's going to earn $1 this year, but COVID-19 will cause it to earn $0.50 instead, then you might think the stock is only worth $5.00 instead of $10.00. But if you think this dip in earnings is temporary, you would still think the stock is worth $10.00.

P/E ratios are just a short-cut to calculating future discounted cash flows, so it sort of makes no sense to price a stock on current year estimates if there is a one-time factor involved.

Intrinsic Value
So this is the part I had a hard time describing. I guess non-financial people (unfortunately including many in the financial press) have a hard time grasping the idea that intrinsic value of a business is the discounted present value of all future cash flows. This person argued that the market looks only at earnings over the next year or two, but not fifty years out. Yes, this is true. But intrinsic value has nothing to do with what the market is looking at. Intrinsic value is a mathematical truth as long as the inputs are correct (or reasonable enough). Intrinsic value is 100% independent of Mr. Market's opinion. Well, Mr. Market does set the discount rate to some extent.

When people slap a P/E ratio on a stock, they are basically discounting all future cash flows back into the price of the stock; they may just not know it or understand it. The P/E ratio is just a shortcut valuation method.

If you value a stock at 10x earnings, you are basically pricing in a 10% earnings yield going out into perpetuity.

So first of all, we have to understand that regardless of what the 'market' is looking at, or what the pundits say on TV, a business is simply worth the present value of all future cash flows. We can argue whether that's earnings, dividends, free cash flows or whatever. But the idea remains the same.

Here's the thing I did to try to illustrate how non-eventful recessions and exogenous events are to the intrinsic value of businesses in general (but alas, this illustration failed to get the point across in this case even though the person is a highly trained engineer! No wonder why Mr. Market is so irrational!).

Simple Model
So, here's the illustrative model. Let's say the market has an EPS of $10/year, and the discount rate is 4%. In this table, I just took the earnings for the next 10 years and discounted it back to the present at 4%, and then added a residual value at year 10 based on a 25x P/E ratio (or 4% discount rate), and discounted that back to the present and added them together. Of course, this would give the market a present value of 250. 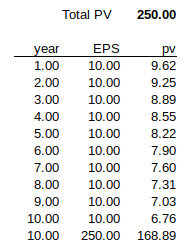 I think most of you have no problem with any of this. For illustrative purposes, the details don't really matter, and I have no earnings growth built in here either.

Now, let's say COVID-19 causes the global economy to stop for 3 months, and companies earn no money at all for three months. Of course, many businesses will lose money (retailers, hotels, airlines), but others will continue at a lower rate but may not lose money in aggregate. Remember, the S&P 500 (and predecessors) has shown a profit every single year since the 1800s, and that includes the great depression, world wars, great recession etc. So this is not a stretch.

Plugging in $7.50 for year one earnings instead of $10.00 would negatively impact intrinsic value of the market for sure. There is no doubt about it.

Let's quantify that. I copied the above table into another one so we can look at it side-by-side.

If the above scenario holds, the intrinsic value of the market would go down less than 1%. 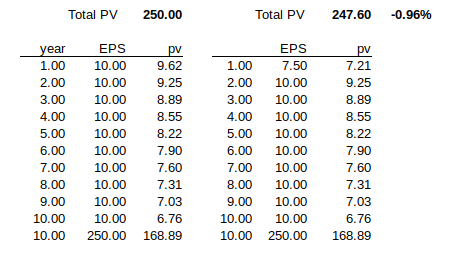 Way too optimistic you say? OK, so let's say the S&P companies make no money for six whole months. What does that do to intrinsic value? 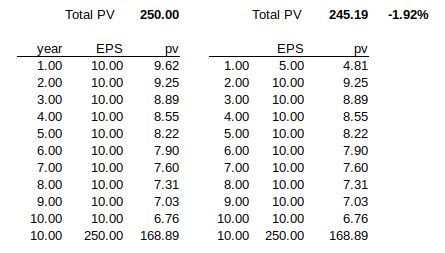 This scenario would dent intrinsic value by less than 2%.

OK, screw that. Too optimistic. Let's say that the economy is wiped out for a whole year, and the S&P companies make no money for a whole year. Remember, this didn't happen even during the great depression or great recession (or during the 1918 flu etc.). 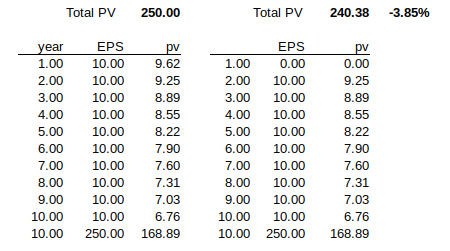 Still too optimistic? OK. Zero earnings for two years, then. 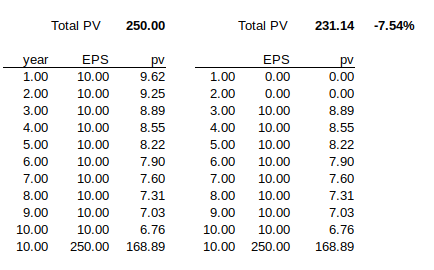 Ah, now we are starting to hurt the market. With zero earnings for the first two years, intrinsic value is knocked down by 7.5%. Ouch. That hurts.

Here are some more: 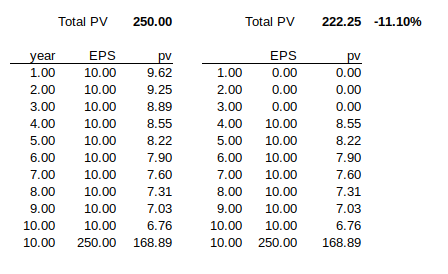 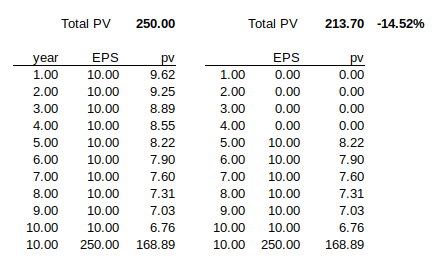 So, with the market down more than 12%, it is like the market is discounting no earnings for the next four years!  Nuts!
When the pundits say that the market is or isn't done discounting the risk of COVID-19 or a coming recession, you can see how that sort of comment is total nonsense. It is based on Keynes' beauty contest. They are just saying that people didn't expect a recession or negative event earlier this year, and now these things are here so the market therefore must go lower as the market lowers their expectations.

But this has nothing, really, to do with intrinsic value or expectations thereof. It is just based on pundits guessing what Mr. Market would do based on the headlines.

Of course, I would be the first to admit that if an event did occur that would cause the S&P500 companies to not earn any money for a whole year, two years or three years, it would cause a drop in the market far in excess of the decline in intrinsic value. That would have to be quite a scary event!

Again, this is just a simple illustrative model. There are other reasons why the market can be down. The market may simply have been overly optimistic / overvalued, and this has triggered a 'normalization' of valuations. Maybe the market needs to increase the discount rate to account for the increasing risks that were not considered in the past. Maybe this will actually cause some sort of permanent reduction in the profitability of corporations in general going forward.

But remember, we all had the same thoughts every time something happens. We all see some permanent negative change that explains a lower stock market. For example, after 9/11, the thought was that the world would never be the same, and that increased security measures will permanently reduce global growth potential and profitability.

Conclusion
OK, so I lied. The above tables clearly show that there is a negative impact on intrinsic value by even temporary business interruptions. But the magnitude is not nearly as much as the market usually moves.

Of course, I am not calling a bottom in the market, or trying to say that markets won't or shouldn't fluctuate based on the headlines. We can be pretty sure there will be more wild days to come. Markets can be up or down 1000, 2000 points on news. I still expect photos of empty streets in NYC at some point before this is over with the market down a lot on those images. NYC is only starting to test this week, so when more cases are found, subways will be empty too, and of course the market will be down on that.

But I have no idea, actually. It's sort of what I expect (and have been expecting since early February).

On the other hand, check out the VIX index. In my trader days, this was my favorite indicator. As Munger says, always invert. You don't usually make money being short in a market with the VIX at a high level, and it's as high as it's been in the past few decades. This is no guarantee that the market can't go lower, of course. 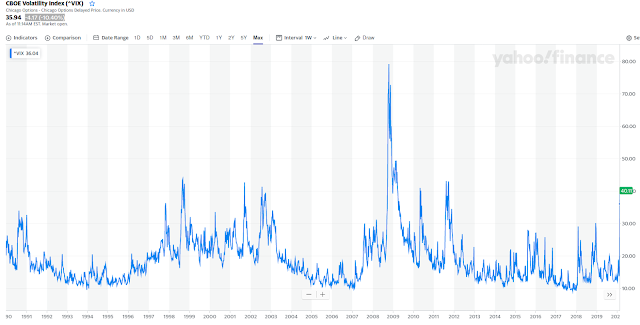 But anyway, who cares what Mr. Market thinks!