FOFI: Hedge Funds at a Discount?

I am not a big fan of closed end funds, but if something is trading at a steep discount, we have to take a look.  In general, a lot of funds have expense ratios in the 1%-2% range, sometimes higher.  So in my mind, they deserve to trade at a discount to net asset value (NAV).

Of course, if the fund is going to outperform the market or whatever index by at least 1 or 2%, then that's a different story; it may be worth it.  But most of us who have been in the business for a long time know that most closed end fund managers are not going to outpeform anything.

Anyway, this one is interesting because 50% of the assets are invested in hedge funds.  Now, when people say "hedge funds", people do tend to get excited imagining 20% or 30% performance uncorrelated with the stock market.  But we also know that *most* hedge funds won't do too well.  Only a handful of the top funds are going to do well over the long haul, and that lists tends not to grow as quickly as the ones that try and fail.

But let's take a look at this thing anyway.

First Opportunties Fund (ticker: FOFI)
This fund is interesting.  Until last year, some time in the spring of 2010, this was a normal financial sector equity fund run by Nicolas Adams of Wellington Management.   And then at some point early last year they decided that they will reorganize the fund to be able to invest 50% of the assets into hedge funds (run by the same Wellington Management; I think one of the hedge funds is now run by Nicolas Adams).

And then the SEC apparently didn't like that a NYSE, publicly listed equity fund is going to turn into a sort of conduit for individual investors to be able to invest in hedge funds (you have to be an accredited investor to invest in unregistered private investment partnerships).  Apparently under pressure from the SEC, the NYSE delisted FOFI and now FOFI is a pink sheet stock.

Since at least one of the hedge funds is run by Nicolas Adams, let's see how he has done over the years.  I assume the return figures through March 2010 is the 'old' fund (before reorganizing), because the shareholder vote took place after that.

I cut and pasted a table from an annual report and it doesn't fit the width of this blog, so I had to just cut and paste the figures; the labels won't fit so I will place that on top of the table (don't know how to line them up side-by-side, sorry)

The bottom line seems to be that over time, this fund has done well, gaining 12.2%/year over a 10 year period compared to the S&P 500 index being down -0.7%/year.  This is not bad given the huge financial crisis which occurred during this period.

However, the fund does seem to have lagged the S&P 500 index in all other periods.  But again, that is not suprising given the financial crisis that just happened.  In fact, the fund has outperformed the financial sector indices in all periods periods from 1 year, 3 year, 5 year and 10 years.

To get more color on this fund going back, I pulled some performance figures going back as far as I can from SEC filings.  Nicolas Adams seems to have been the manager since the mid 1990s, at least. 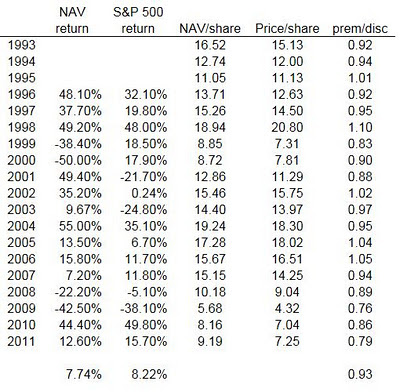 I actually don't really know what to think about this performance as it is a sector fund; Adams does seem to have outperformed the sector indices in the above cut and paste from the 2010 annual report.

Reorganization
So wht the reorg?  I don't want to get into the specifics of exactly what happened (advisors/subadvisors changing etc...), but I think the change occured lead by Stewart Horejsi, whose entities own (and have owned) 36.4% of FOFI.   Securities filings show that his entities have owned 30-40% of FOFI at least back into the 90s, so this is not something he picked up during the recent financial crisis.

I may research and write more about Horejsi later, but for now let's just say he is a value investor that likes to buy closed end funds at steep discounts and take over the management of the assets.

This reorganization too was presumably lead by him.  This may be due to the volatility of the fund itself; having gone down 70% once in the late 90s and by more than 50% again in the recent crisis.

There is obviously a little boom in non-correlation, and moving assets out of long only stocks into 'hedged' or non-correlated assets like hedge funds sort of fits that trend.

As I said above, one of the hedge funds is managed by Nicolas Adams, who has run this fund before the reorganization.  The difference is that he will be running it as a hedge fund, meaning that he will be buying and shorting financial stocks.

This can be a good or a bad thing.  Back in the old days, I've heard of many people go from mutual fund, long only strategies to long/short only to not do too well.  Short selling stocks is a very tough and tricky game and it does take a different kind of temperament to deal with it.

My impression over the years has been that I tend to think that this conversion from long only investing to long/short strategies don't usually go well.  As evidence, look at all those long/short funds that mutual fund companies offered over the years; I don't think too many of them have good performance track records even though the mutual fund companies have a lot of great research infrastructure to support that kind of business.  I think it's just a whole different mindset and it's hard to switch over.

I could be wrong about that.  I haven't done any research to prove this, so it's just a guess.  I wouldn't necessarily be wildly excited about someone who has managed long only for many years suddenly going long/short.

Of course, I have no idea how this Nicolas Adams is, so it might be that he has in fact been running a long/short portfolio for Wellington all along and may be very good at it.  But if that is the case, we don't have information to support that either.

The 2010 proxy does say that the board has been studying Wellington (and presumably it's hedge fund business) for eight years, so the performance must be pretty good. The proxy does state that the process to invest in Wellington's funds started in 2008 or so as they were looking for a way for FOFI to get more investment flexibility including being able to short. So the 2010 switch occured after a couple of years of work after figuring out how legally to get it done.

So How Has it Gone?
The new advisors took over in June 2010 and the realloaction process began then. Since then and through September 2011, this is their performance:

This is the annualized return since June 2010 through the end of September 2011. Of course, this is way too short a time period to evaluate anything.

Half of the net assets are invested in a group of hedge funds; I won't list them here as I don't have any information on them so it wouldn't mean anything (all holdings are listed in the FOFI reports to shareholders).

Going forward, this fund will no longer be a financial sector focused fund; the new advisor (entity run by Horejsi) is having Wellington Management liquidate the legacy portfolio (banks, thrifts and savings and loans) while Horejsi buys large positions in stocks like Johnson and Johnson.

If only I can figure out the return potential of the hedge funds, this can be an interesting idea, particularly at a close to 30% discount. It's important to remember, however, that closed end funds do typically trade at a discount of anywhere from 10-20%.

If exposure to hedge funds is the objective, I would prefer Greenlight Reinsurance (GLRE) now at a reasonable valuation as David Einhorn does have a very public, good track record.  Also, hedge fund operators often do better than the fund themselves due to the operating leverage of running a money management business.  As assets under management (AUM) grows and costs remain stable, additional fees can all fall to the bottom line.  I will look at some more asset managers in the future.

In further posts, I may look more into Stewart Horejsi and his other entities that people sometimes recommend as a way to play Berkshire Hathaway at a discount (Horejsi is an early Berkshire Hathaway shareholder; he made is wealth with it and has since become a full time value investor working with these entities. The entities, by the way, are ticker symbols BIF, BTF and DNY (and maybe some others).

Email ThisBlogThis!Share to TwitterShare to FacebookShare to Pinterest
Labels: FOFI