Staggering, Off the Charts

This is how Apple described iPhone demand in China on their first quarter conference call.  Demand is staggering.  It's "off the charts".  They could have sold more but were way too conservative.

Apple is pretty much one of the most widely watched stocks so there is no point in my going over the details here, but I'll just jot down some things that interested me, or maybe I should say blew me away.

First of all the eps came in at $13.87 and analysts expected something close to $10.00/share.  That's a double from the $6.43/share they earned last year.   Cash and investments are now at $97.6 billion, another staggering, off-the-chart figure.

So let's take a look at the quick trailing 12-months eps and p/e ratio net of this cash/investments.

The weighted average diluted shares outstanding for the first quarter was around 942 million, so the cash and investments is worth $103.60/share.

Apple stock promptly shot up today so let's say it's trading at around $450/share.   Net out this cash and investments and you have $346/share for the Apple business.

So Apple stock is basically trading at 9.8x  p/e ratio on a trailing twelve month basis even after today's rally.  This is stunningly cheap.

(This cash and investment doesn't take into account potential tax liability on repatriation; I think $64 billion or so is held offshore; after tax equivalent cash would be a bit less. This would be subject to a 35% tax hit, but there is a credit for foreign corporate taxes paid, so the actual liability would be less than that) 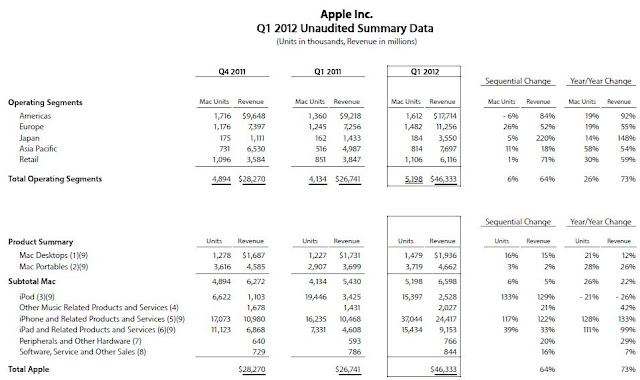 Growth is Widespread
I don't know if the above table is legible (you can see this table at the Apple Investor Relations website), but what is amazing is how broad the strength in the business is.  Even in the Americas and Europe, basically no growth economies, revenues grew strongly (+92% in the Americas, +55% in Europe).  Japan had revenue growth of 148%, Asia Pacific of +54%, retial growth of +59%.  All of these figures are year-to-year.

While PCs and laptop sales growth are in the low single digits, Mac desktops and laptops seem to be growing strongly.

Of course, how stores do is going to be purely a function of Apple products; if they stop making hit products, the stores can quickly become a burden.   But at this stage in the game, the stores do seem to be adding value with decent margins and probably contributing to the brand value of Apple (the stores are easy to shop with plenty of help unlike typical electronics stores).

Outlook
They forecast second quarter eps of around $8.50, versus analyst consensus of around $8.00, so it seems the momentum is continuing.

A large contributor to this momentum seems to be enterprises starting to adopt the iPad.  It took a long time for corporations to start using the iPhone (as it was incompatible with the rest of the IT infrastructure at large corporations), but Apple is seeing quick acceptance and adoption of the iPad which is leading to a halo effect; once you get an iPad, you are more likely to get a Mac etc...

Thoughts
I do own some Apple stock.  It is pretty cheap with tons of cash/investments on the balance sheet and I don't think Apple is necessarily a 'fad' or short term hit product like the Motorola Razr or Rimm Blackberry (which did dominate for a long time).  Apple is a bit more than just a gadget as it does have a great ecosystem which the Razr and Blackberry and other hit products didn't have.

This is not to say that the Android and Microsoft can't eventually catch up.  Over time, these things will be standardized and I guess we will be able to listen to music, read books, play games and do whatever we want on all sorts of cheap gadgets with software and content provided by multiple players.

I will continue to own Apple and be interested in it as long as it is very cheap.  I would probably be a seller of this at a 'fair' price, like if it gets up to 15 or 20x p/e ratio ex-cash as over the long term it is hard for me to see where Apple would be in say, 10 or 15 years.

Anyway, I am a bit more optimistic about Apple than the skeptics but agree that over time it will be hard to imagine a world where a cheap Samsung, ASUS or Dell gadget won't be doing similar things to what Apple products do now.
Posted by kk at 3:44 PM