Not to get too caught up with Leucadia and what the smart folks there say, but this "wind at your back" and "protein" talk reminded me of a nice little company that may also be a protein play.

LUK bought National Beef partly because it's a play on the rising consumption of beef around the world as GDP per capita continues to rise;  people eat more meat instead of rice and beans as they get richer.

So here's another play on that, although Seaboard Corporation (SEB) said in their 2011 annual report that even though people consider them a play on protein consumption in the U.S., their protein business is only 1/3 of their sales and even less than that is sales in the U.S.

Anyway, before I go on, let me show you one incredible thing.  Here is the book value growth of SEB over various time periods compared to the S&P 500 index and Berkshire Hathaway.

SEB did way better over the past ten years, but not as good as BRK since 1989 (but still way better than the S&P 500 index).  But I wouldn't hold that against SEB. 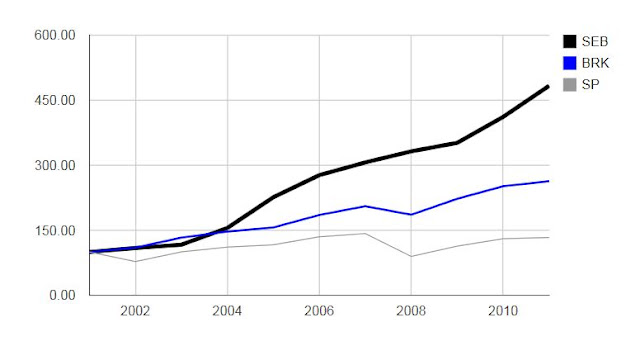 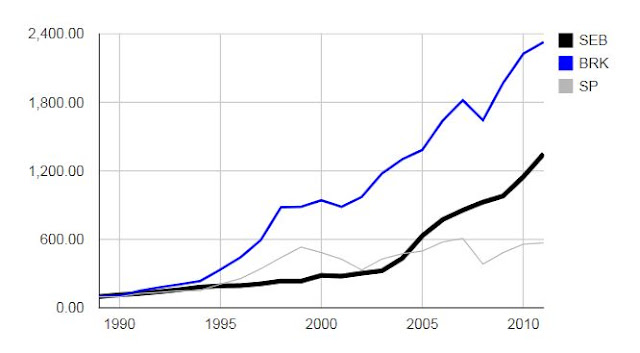 Seaboard Corporation
Seaboard was founded by Otto Bresky.  The website says it started with a purchase of some flour mills back in 1918.  Otto Bresky ran it until 1973 when his son, H. Harry Bresky took over.  In 1982, they sold all the flour mills to Cargill and changed the name to Seaboard Corporation, and in 2006 H. Harry Bresky retired and his son Steven Bresky took over.   Steven Bresky owns 74.6% of SEB.  Since getting out of the flour milling business, they have invested in various business from poultry production/processing (which they sold in 2000) to the various businesses they own now (marine, pork, commodity trading and milling, power etc...).

These guys really run their business for returns on capital and their record shows that they have done very well.

Sales Breakdown by Geography
To show where they have been growing their sales, here is a comparison of sales by region in the year 2000 and the most recent 2011:


2011 Annual Report
SEB is another one of those rare companies that have a really good annual report with no nonsense commentary about the business.  You won't hear the usual corporate jargon of the day or any other nonsense in the letter to shareholders.

Here are the first two paragraphs from the 2011 Letter to Shareholders:

In the last couple of years, the pork business has done really well while the marine business has not done too well due to higher energy prices and lower shipping volumes due to the weak economy.

The pork business operating income grew +22% due to higher pork prices and more hogs processed.  Domestic consumption of pork per capita is "stalled" due to higher prices, but exports were up +23% to an all-time record.  Maybe SEB is already achieving what National Beef hopes to achieve in the future.

Summary of Financials
Here are some basic figures going back to 1989 or so to get a feel for how SEB has done over time. 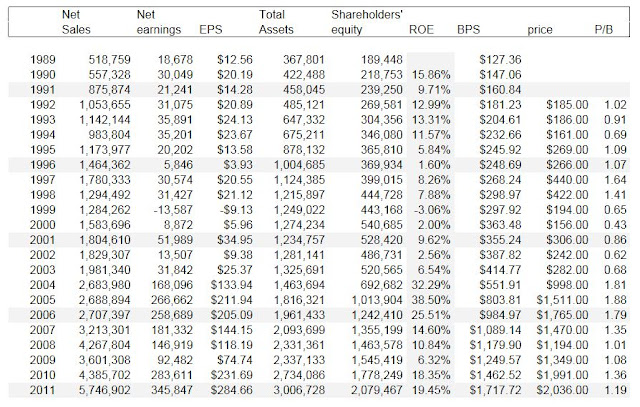 (ROE is return on beginning equity)

SEB has paid dividends over the years but it has been less than 1% so is basically a token dividend.  Most of the cash generated is invested back into the various business lines.  We can see from this table that SEB has grown consistently with only one loss year despite what appears to be a cyclical, commodity business.

SEB has structured the business so that various segments can offset each other. For example, the Commodity Trading and Milling segment may do well in times of high grain prices when that may hurt the pork business.   As SEB explains in the annual reports over the years, they believe this sort of vertical integration helps to smooth out earnings volatility.   Their record shows this to be the case.

The average ROE and P/B ratio for various time periods have been:

We already know they have good returns from the book value growth.  On a ROE basis, we see that they have earned pretty consistent double-digit ROEs.

The stock price has also tended to trade near book value or a slight premium. 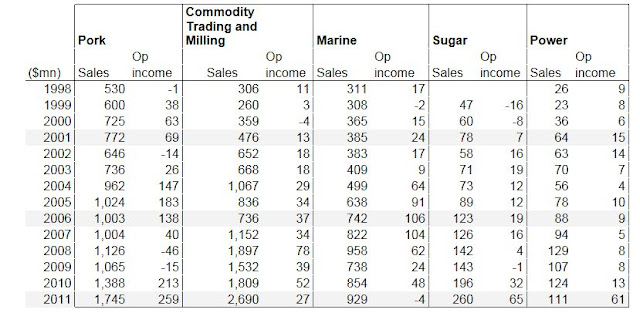 So the above are just some figures pulled from the annual reports.  The segments are pretty consistent, but in one year the Power segment was in "other" and there was a poultry business that was sold in 2000.  I left out the "other" and also the turkey business is a new reported segment that's not in the above table.

So this is really an interesting mix of businesses and I bet Steinberg of Leucadia would look at this portfolio and love it saying that it would benefit greatly from increasing protein consumption around the world and inflation  (OK, maybe he will shudder at the Argentinian asset (as LUK owns CRESY and is not happy with what's going on down there).

But it seems like they are positioned similarly with the "wind at their back".

One key difference is that SEB has always been an agriculture based business so they are not really straying far from their area of expertise (this is not to say that LUK is moving away from that; they know what they're doing).

Long-Lived Assets by Region
Since they do own assets in Argentina, the Dominican Republic and other places, we have to wonder how much of the assets are based in those places:

So they do have some exposure in Argentina, but against $2 billion in net worth, this seems totally manageable.

Emerging Market Exposure
So from the above, we see that SEB owns assets in Argentina and the Dominican Republic, does a lot of shipping business in the Americas, and has a lot of sales even in Africa (milling etc...).   SEB also has exposure via exports.  (SEB is looking to increase exports to the Asian region; it already exports 10% of their pork to a few customers in Japan).

Strong Balance Sheet
They also have a solid balance sheet with $53 million in cash, $360 million in short term investments and $162 million in long term debt (including current maturities) against $2.2 billion in shareholders' equity as of the end of March 2012.

Conclusion
So here is a company that has grown book value per share over time at a very nice clip, even beating Berkshire Hathaway in the past ten years.  The past decade has been rough for many and SEB seems to be doing very well.   Their good performance looks pretty consistent over time.

Unlike other situations where I said book value has grown nicely in the past decade, this one isn't a levered financial stock.

The stock is in the agribusiness, and as Steinberg would say, the wind is at their back.  This portfolio would benefit from inflation and increasing protein consumption around the world.  They have exposure in some emerging markets so it's a nice way to get exposure there without the capital market risk of emerging markets (investing in local companies).

I am not big on 'theme' investing, usually, but if the idea stands on it's own without the thematic overlay, that's great.  If the theme fits, that's a bonus.  But I would never disregard the fundamentals to invest in a 'theme' (just look at FSLR, the solar play; ouch).

The marine business seems to be depressed now due to the high energy prices and weak economy, so if things eventually turn around, this segment can start contributing again.

Given the conservative balance sheet, historical performance (see all of the above), and the sort of wind at your back on the various themes and the fact (that may excite some people) that this is not a financial stock makes this a very compelling idea at 1.1x book.

Without naming names, I would bet that some value investors would certainly like this idea (especially the investors that like wind and protein.  If you don't know what I'm talking about, read my notes from the Leucadia National annual meeting here).

Anyway, as usual, this is not a stock recommendation. It's just some thoughts on an idea.  Some people will think it's interesting.  Others won't.   Do your own work and make up your own mind.  If you read this post, buy the stock and then lose money, you deserve what you get!

Email ThisBlogThis!Share to TwitterShare to FacebookShare to Pinterest
Labels: SEB