OK, so here's another nail that we can hammer down with our asset management company valuation model.  I have been following this company since the IPO but haven't really taken a close look at it recently.

This is a pure, deep-value investment company run by Richard Pzena.  In case you are wondering, this is the "Rich" in Joel Greenblatt's You Can Be a Stock Market Genius book.  Greenblatt talks about how large institutional investors are at a disadvantage compared to individual investors and smaller investors like himself that can seek the special situations described in the book .


I spoke with a professional whom I consider one of the best in the business, a friend I'll call Bob (even though his real name is Rich).  Bob is in charge of $12 billion of U.S. equity funds at a major investment firm.    -  page 18


"Bob" outperformed the S&P 500 index by 2-3%/year over the past decade, and Greenblatt goes on to describe how hard that is with a multi-billion dollar portfolio.

Anyway, so this is Rich's investment management company.

Performance (Pre-crisis)
According to the 2007 prospectus, Pzena was doing really well.  Here are some charts: AUM grew a bunch during the bull market into March 2007.

And here's the return for the Value Service portfolio from 1995. 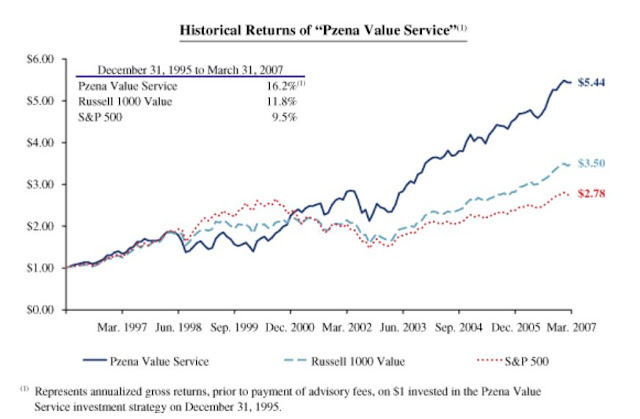 This return is before fees, but 6.7%/year of outperformance is pretty impressive over this time period.

And then the crisis happened.   They had a bunch of really awful financial stocks in their portfolio, including Freddie Mac that he really talked up in presentations, as I remember (only read about it on the internet).

This may be too small to see.  You can try to click on it and see the table a little bigger.  If not, this is in the 2nd quarter 10Q.

In any case, it's not pretty.  They have done horribly in the recent past;  Value Service having lost 5.6%/year in the past five years versus a flat market.

But remarkably, even with this bad short term result, Value Service has outperformed the S&P 500 index (net of fees) with a return since inception (January 1996) of +8.7%/year versus +6.9%/year.  Small Cap Value has outperformed the Russell 2000 by 12.0%/year (net of fees) versus +9.0%.  Small Cap Value seems to have done well even in the shorter time periods.

Anyway, I think it's a really tough time for deep value investors so I don't know that you would want to evaluate managers on just their short term performance.

Many are turned off by Pzena's investments in some of the financials that had problems (including Lehman), but they are deep value investors so things they invest in will go bad every now and then.  I wouldn't write off a manager just because they made a few mistakes; performance over the long term is going to be what matters.

I know there's a lot of people who will say that they can never trust someone who bought FNM, FRE and other financials going into the crisis.   But Pzena has said that in the last cycle, his largest holding went bust (I think it's Fruit of the Loom), but they still managed to outperform through the cycle.

Mistake?
If you have a situation that might double or go to zero, but you think the odds of zero is even as high as 20%,  you are still looking at a 60% expected return.  On this bet, one out of five times, the thing will go to zero.  If you made this bet and lost money, it's clearly not a mistake.  I would take this bet all day.

But in the stock market, people will call it a mistake.  They don't see the math and the assumptions; all they see is someone buying a stock before it went to zero.  That just doesn't look good.

The trick is not putting yourself in a situation where if the 20% chance event occurs, you would be out of business.  That's a money management issue (how much of a stock to buy).

I think Pzena said his mistake was to own too much in financials, not so much that he invested in them.

The Bad Years
Anyway here is how the Value Service account did on a net basis during the trouble years compared to the S&P 500:

Despite this, Value Service and Large Cap Value has maintained their outperformance on an initial-to-date basis.


Here are some of the fundamental metrics of PZN during those years:

Vanguard Windsor Fund
PZN got a new mandate recently as the co-manager of the Windsor Fund, which I think is a big deal.  The Windsor Fund is a legendary value fund and is one of Vanguards biggest and oldest funds (since 1958).   According to the August press release, they will manage 28% of the $12 billion fund.   The Windsor Fund was run by the legendary John Neff for 31 years between 1964-1995.  According to Wikipedia (if it's on the internet, it' got to be true, right?), the fund gained +13.7%/year versus +10.6%/year for the S&P 500 index during those years.

Anyway, 28% of $12 billion is over $3 billion, so even just on that, that's a big win.  I'm sure this will help in marketing PZN to other institutions.

So What's PZN Worth?
OK, so what is this thing worth?

It looks like management fees have been steady in the 0.55% area.  For AUM, the latest figure as of the end of August 2012 is $16.4 billion.  For operating margin, let's use 50%.   They have been able to maintain 45-50% throughout this bear market and Pzena has cut costs, so I think it's OK to assume that they can keep a 50% operating margin going forward, which can very well go up if AUM rises from here.  The cost cutting of the recent past may give a nice operating leverage kicker if that happens.

But anyway, let's use 50%.  You may notice that it seems a little higher than the other asset managers.  I attribute this to the fact that PZN has very few funds and a small team that manages a pretty big portfolio.

Anyway, plugging in these figures, we get an operating earnings figure of $45.1 million.  For shares outstanding, I will just use the total of the class A and B shares (the way the financials are presented in the filings are confusing; they use only the A shares and deduct earnings attributable to the B unit holders etc... For analyzing the company, that is not necessary).

So the above $45.1 million operating income comes to $0.69/share.  Using the 10x pretax valuation, that would value PZN at $6.90/share.  But this excludes any adjustments for balance sheet items.

On the balance sheet as of the end of June 2012, there was $36.5 million of cash and investments.  There are some accounts payables and accrued expenses, but I assume that is an offset to advisory fees receivable.  I also ignore the deferred tax assets and the liability to selling and converting shareholders as they are pretty much offsets (even though I don't know exactly what accounts for the small differences;  85% of realized deferred tax savings is payable to the selling/converting shareholders so I look at it as pretty much an offset).

What if AUM keeps going up and margins improve?  Pzena has said margins would improve on increased AUM because costs (compensation/bonuses) won't go up as quickly as revenue.  He did say before that the 70% operating margin they achieved in the recent peak (2007) was unsustainable.  He never guided to any specific figure, but we know 70% is too high, so maybe 60% is reasonable.

Here is a table of what PZN might be worth depending on AUM levels and operating margins.  I assume 0.55% average fees and 65 million shares outstanding (there were no dilutive shares as of the end of the 2Q so I didn't include any; there are close to 5 million total options outstanding but many have higher exercise prices.  To be conservative, you can give a haircut for that, though (even though options exercise will increase cash).

Also, this table excludes balance sheet items (like cash and investments), so you can add $0.56/share yourself. 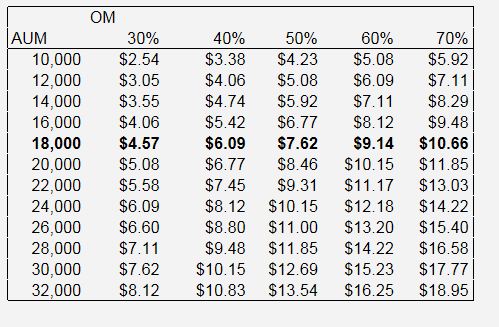 So according to this table, if PZN can get their AUM up to $18 billion and operating margins to 60%, it would be worth $9.14/share (excluding cash/investments on b/s).

If they get their AUM back up to where it was at the peak, which was around $28 billion (according to the chart at the top of the post) and they maintain 60% margins, PZN would be worth $14.22/share.

Deep Value Investing Cycle
Anyway, as I was looking at PZN, I found an interesting thing that Pzena said on one of his conference calls describing the cycle of deep value investing and it was really interesting.  He also has some great information on his website regarding value investing and why it will continue to work.

It is so interesting, in fact, that I was going to put it into this post, but I think it's worth a whole separate post so I'll make that post later.

The bottom line is that deep value has been hugely out of favor, but this pattern of being out of favor is consistent with past cycles.  And if past cycles is any guide, there will be many years of outperformance going forward from here.

Conclusion
This is really an interesting situation and I didn't realize how undervalued it was.  It has always seemed a little expensive to me, but having gone through the above analysis (and seeing that AUM is coming back up), it is looking pretty good now.

In the case of PZN, I would not worry about the board and management at all.  These guys are solid, deep value guys and I like that they don't veer away from what they're good at.  Everyone else seems to be style-drifting to accomodate the increasing risk aversive and market-neutral bias of institutional clients, but I like how they stick to their guns.

Also, they are not pushing funds out left and right to increase AUM at all costs.  They are disciplined and seem to really want to do a good job on the few strategies they run.

As you will see in my next post, deep value and even regular value is hugely out of favor, and despite new highs in the market, it still feels like the stock market is kind of out of favor too.

So what do we have?
The big negative (other than the usual risk of the stock market), of course, is PZN's performance during the crisis.

As I said, I too scratch my head at people jumping into financials in front of the biggest crisis in history, but I also understand that just because someone buys something that doesn't work out shouldn't automatically disqualify them; if they can outperform over time, that is going to be the key issue and PZN has a good chance of doing that.