So JPM had their marathon investor day the other day.  The slides and presentation is available at the JPM investor relations website.  It's well worth a listen for anyone interested in banking.  It might be torture for those who aren't, though, because it's long.  But long is good.  We want more information, right?  People keep saying banks are black boxes and are opaque.  I wonder if any of those people have listened to it.

Anyway, I won't go through too many slides.  Each division had their own presentations and it was pretty detailed and well done.  I do feel good about JPM management below Dimon; it seems like they do have a lot of good talent there.

2013 Result and Quick Thought on Valuation
Anyway, just as a reminder, JPM had one time charges (Madoff legal charge, mortgage related legal costs etc...), but even with that they earned 11% return on tangible common equity.  Excluding those and other charges, they had a net profit of $23.2 billion and an EPS of $5.70.  The return on tangible common equity was 15%.  So with the stock trading now at around $59/share, it's a 10.4x p/e stock. JPM is now trading at around 1.1x BPS and 1.45x tangible BPS.

So it's no longer no-brainer cheap, but is still attractive as it's a great company with growth prospects and potential for a higher multiple.  I always use 10% or 10x p/e for financials, but smaller banks seem to be trading at 14-15x multiples and bigger banks are discounted due to their big-ness.  JPM in particular might be discounted for their exposure to investment banking and their large derivatives book.  I think the financial crisis has shown the benefit of having a diversified book of businesses but the market may not agree.  But market views do change over time.  If they come around, valuation might go up.

But even without a valuation increase, with 30% dividend payout and 15-16% return on tangible common equity, JPM may be able to grow 9-10% over time (or more), and that alone without valuation improvement may offer a reasonable return.

BPS Growth
Here is the usual table of BPS growth.  Note that the BPS growth exclude dividends.  JPM paid $1.44/share in dividends last year, so tangible book growth with dividends included would have been 9%. Not bad in a year with all sorts of legacy charges and not so exciting year for banks and investment banks (even though the stock market was up 30%+). 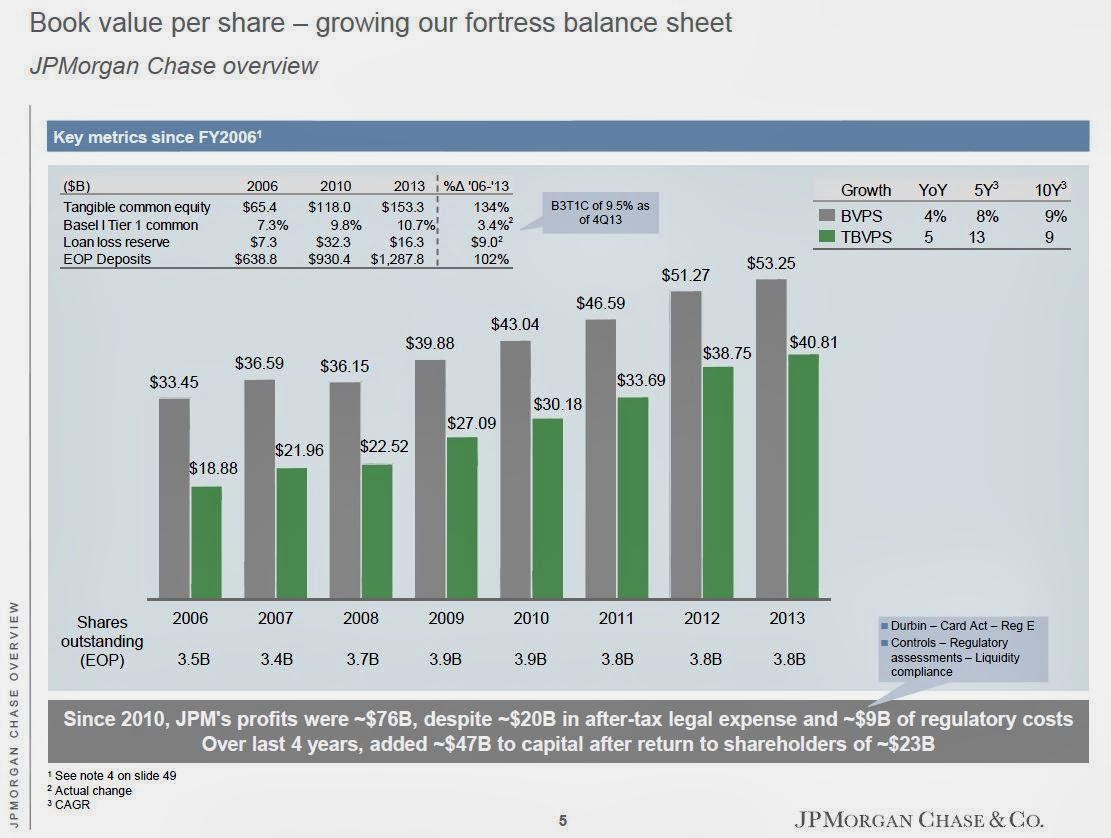 Here's a table that shows that JPM will be accumulating excess capital over the next couple of years: 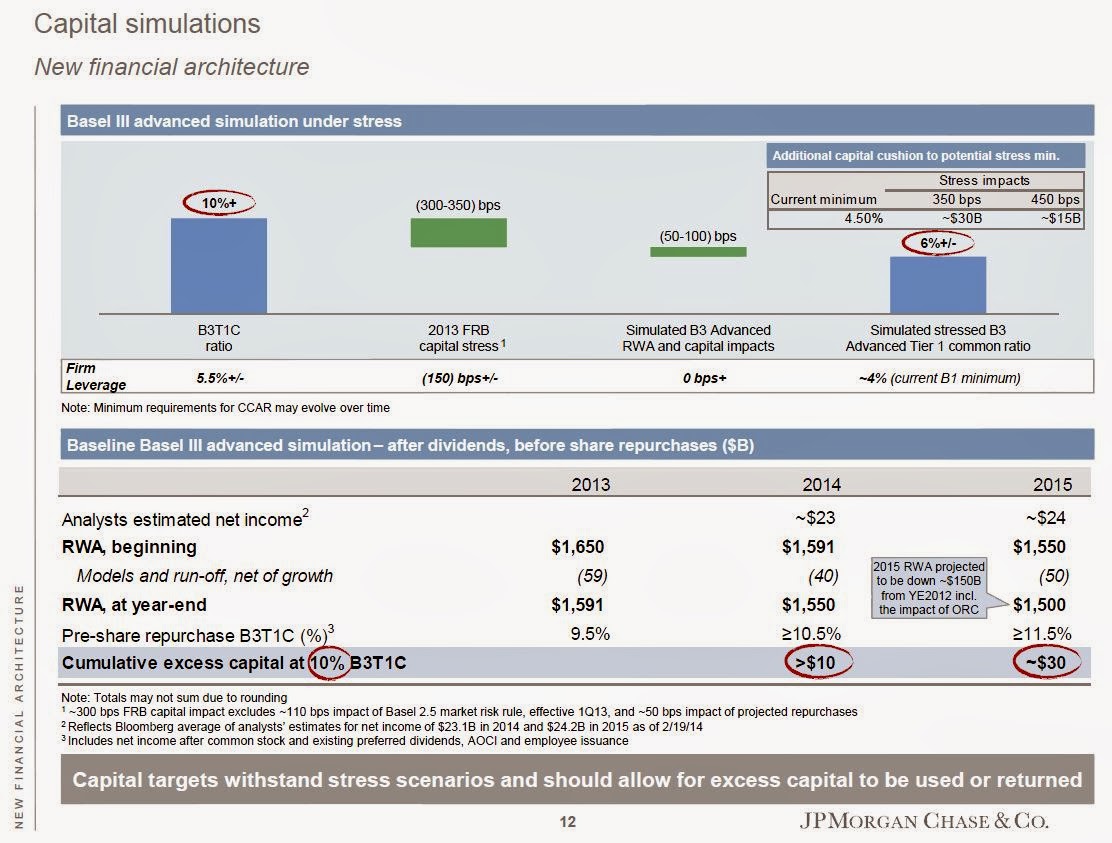 JPM View on JPM Valuation
So here's an interesting slide that we haven't seen before.   Dimon has said that it's a no-brainer to buy back stock at tangible book value (where it actually traded not too long ago).  But JPM feels the stock is still cheap.  Using various valuation techniques, they see it as undervalued by 20% and even more undervalued against peers.  The stock closed at $58/share on February 24, the night before investor day, so that means JPM is worth at least $70 (as they see it). 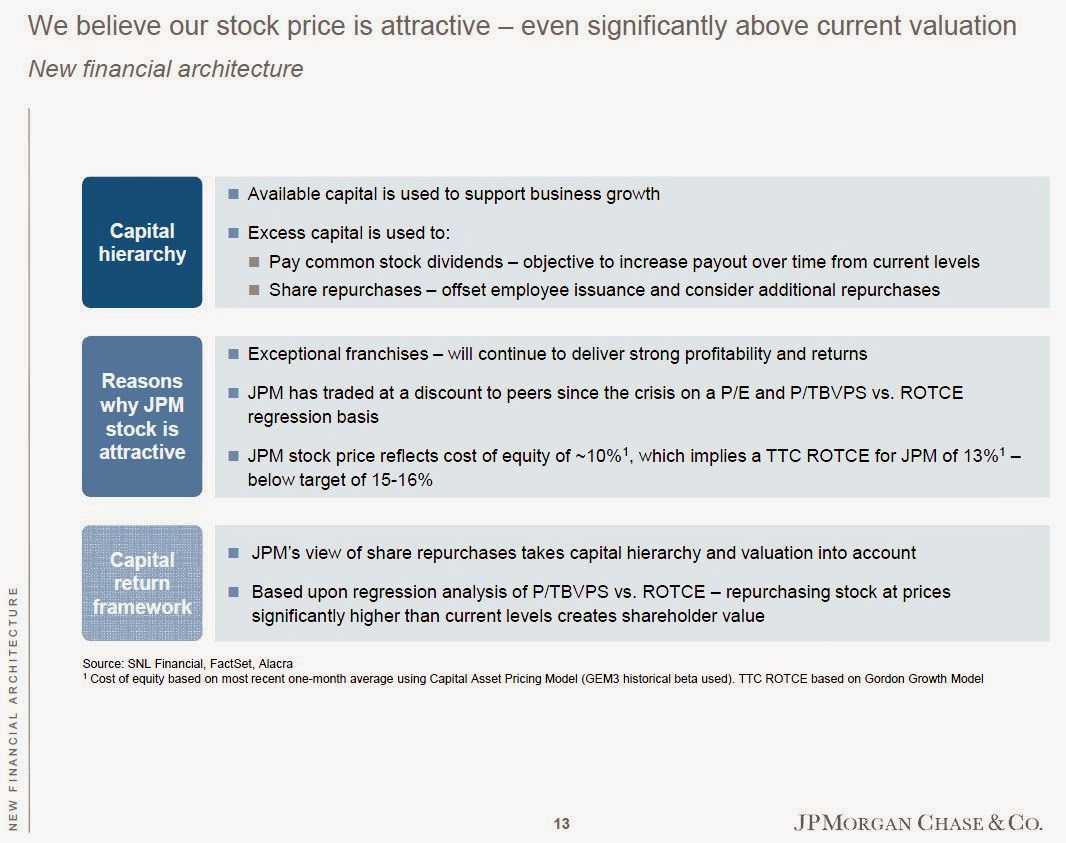 And the last bullet is interesting too: "...repurchasing stock at prices significantly higher than current levels creates shareholder value".  Marianne Lake (CFO) said that repurchasing shares even at 2x tangible book would be accretive to shareholder value.   That's almost $82/share, or 40% higher than the current price.  I suppose this would be accretive to EPS as you can take cash earning nothing and buy something at a 7.5-8.0% earnings yield (2x tangible book; 15-16% ROTCE).

Targets by Line of Business
JPM's good performance seems to be across the board. 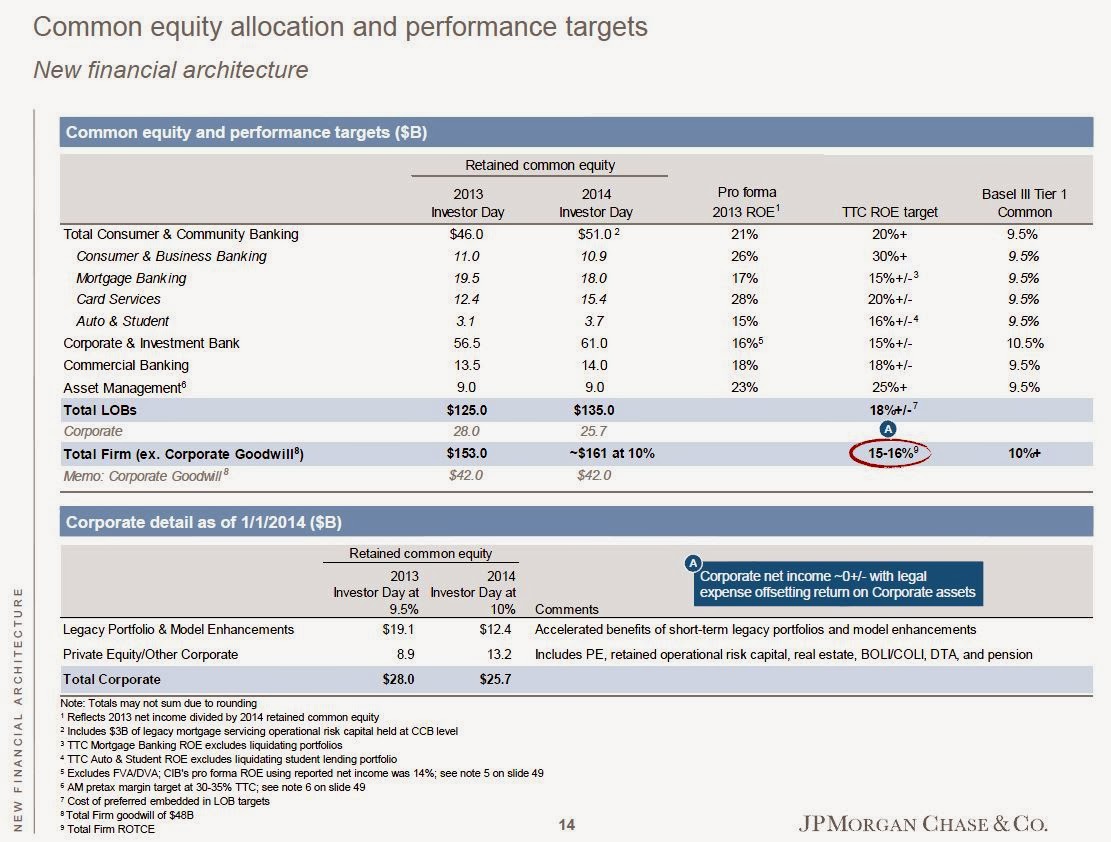 Charge-off Trends
In case you wonder if JPM's good performance recently is driven by abnormally low charge-offs, below is a table that shows what JPM sees as the normalized level of charge-offs "through-the-cycle" compared to recent trends.  You will see that it is slightly lower now, but not much. 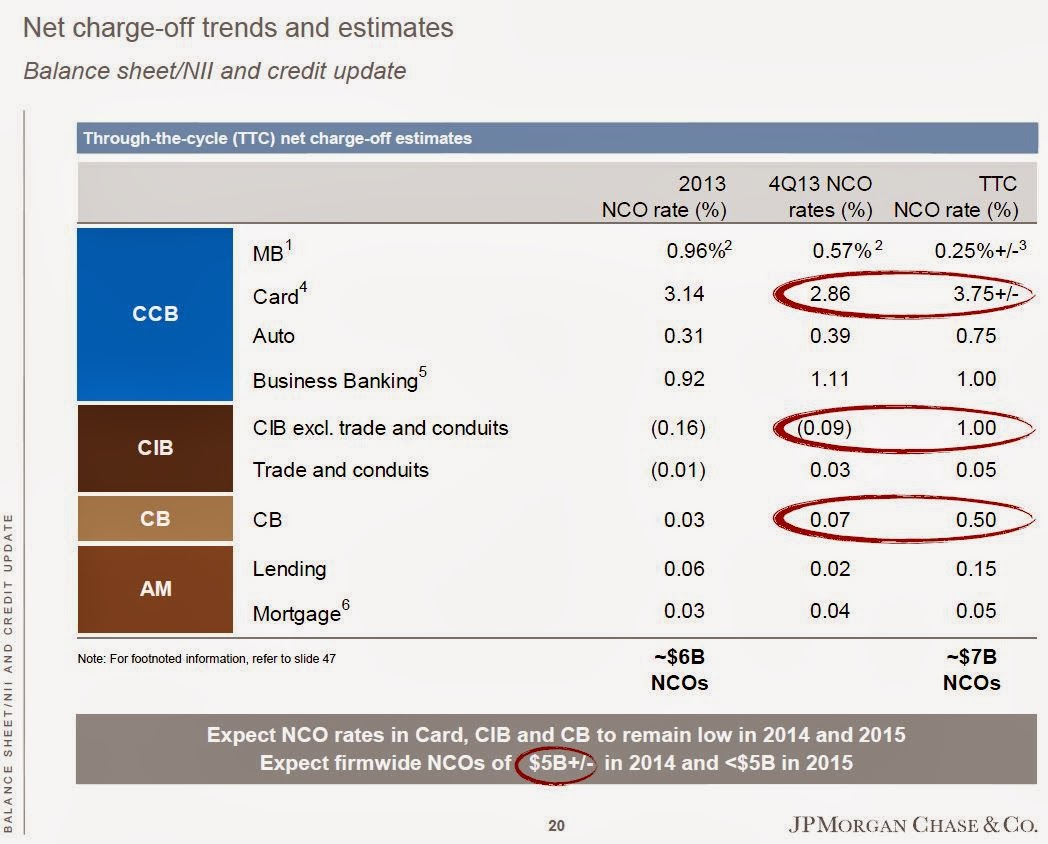 Revenue Impact of Exited Businesses
We also read a lot about big banks getting out of this or that area (commodities), and wonder what kind of revenue/profit impact there will be.

Here's a slide that shows the impact of JPM's recent exits: 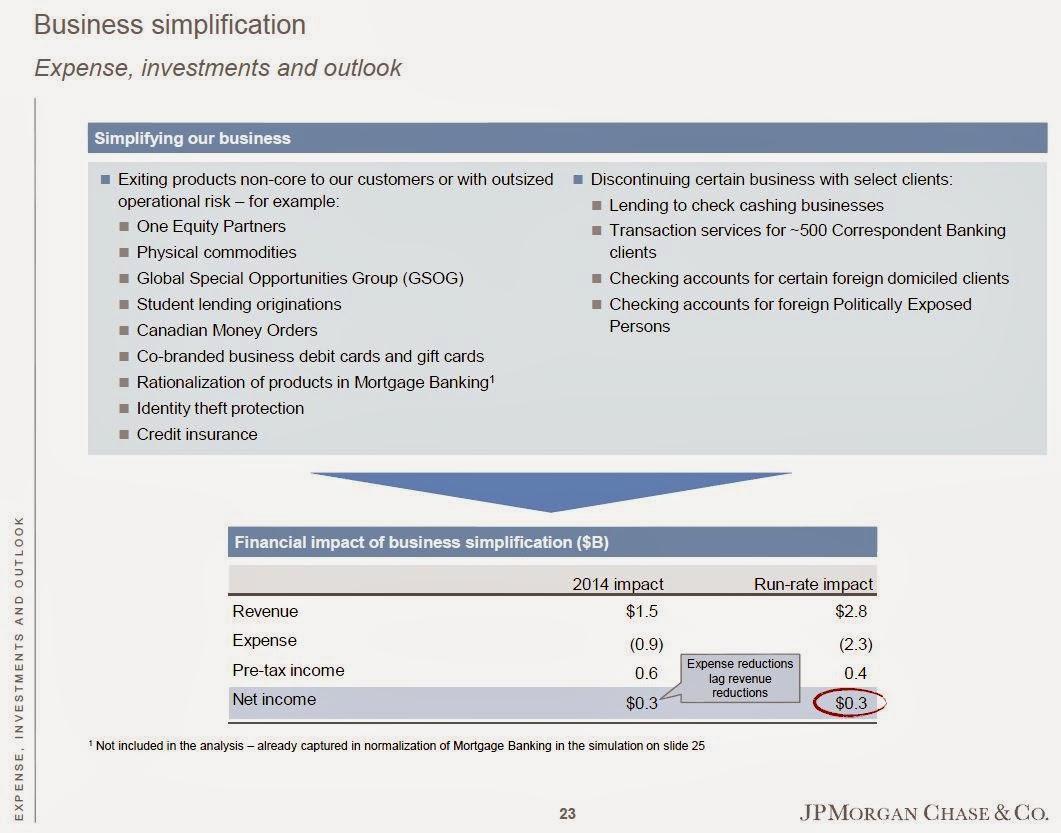 Normalized Earnings
And as usual, here's the chart that shows what JPM can earn over time when things 'normalize'.  This chart includes the normalization of recent expenses, and the two big positives are incremental earnings from investments and normalization of interest rates.  They see an inflection point in interest rates coming (though they don't know when it will happen).

The normalized earning power is $27 billion.    There is $800 million in preferred dividends so deducting that you get $26.2 billion in net income to common shareholders; with 3.8 billion shares outstanding, that's $6.90 in EPS.   So at $59/share JPM is trading at 8.6x normalized earnings power. 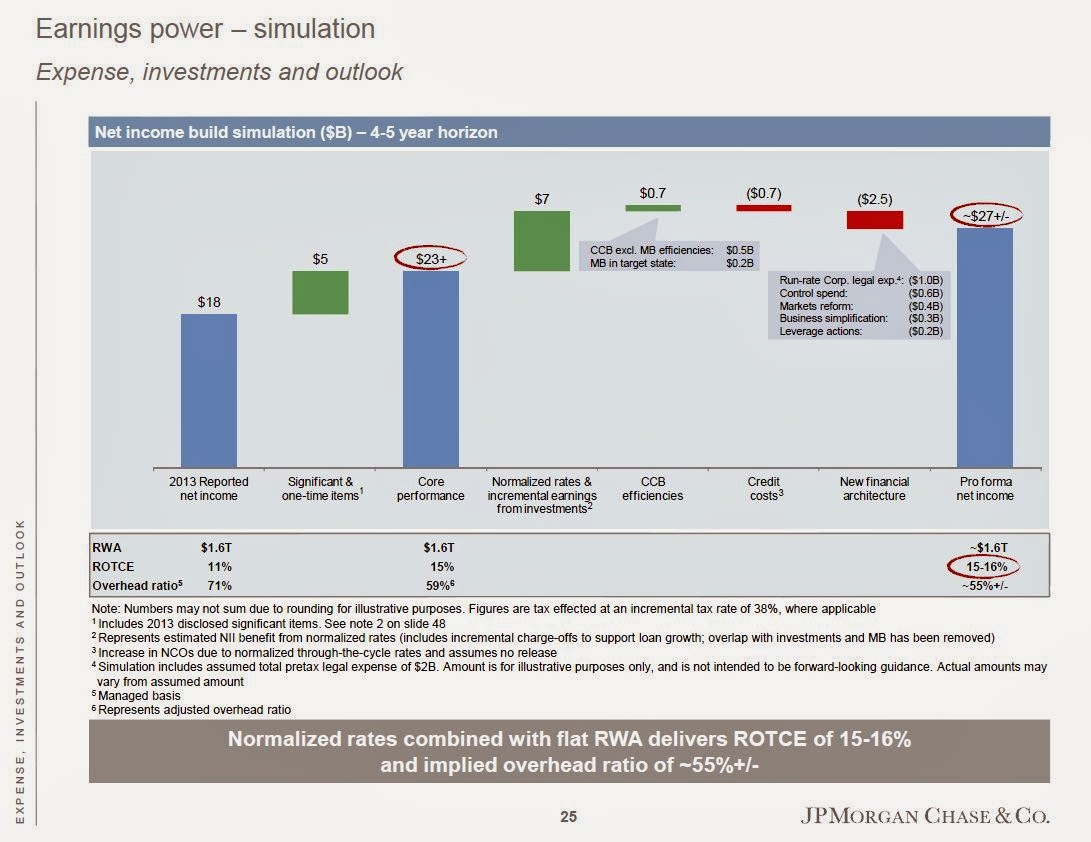 It says the time horizon is 4-5 years.  With adjusted earnings in 2013 of $23 billion, that doesn't seem like much improvement; $23 billion to $27 billion in 4-5 years is only 3%/year.  But the above chart is only an indicative illustration of what normalization would do to earnings with things currently in place.  The time horizon is for normalization of interest rates (don't know when that will happen), and I suppose the maturing of the investments currently being implemented.

It does not include growth in the various business lines.  Dimon said that the $27 billion is not a budget figure (meaning, it is not a goal or target for JPM to earn $27 billion in 4-5 years.  A budget (goal or target) over that time period would be much higher).

During the Q&A, someone asked about this and Dimon initially said something like 5%/year growth is possible but quickly said that investment banking can easily go up 40% at some point.  5% growth is what JPM expects for core loan growth, so maybe that's where that figure came from.

Dimon is very bullish investment banking, asset and wealth management (and other areas).

Look at this slide: 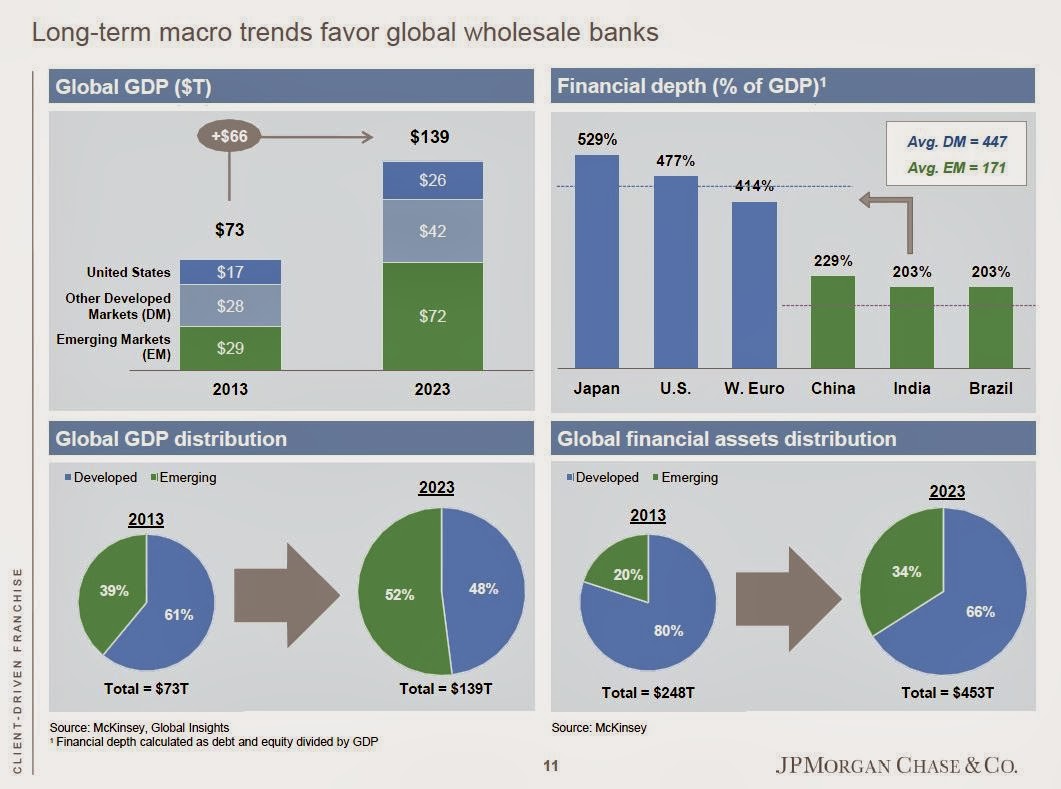 It is a very exciting slide, and it's good for Goldman Sachs (GS) and other banks too.  But on the other hand, when Japan's "financial depth" increased, did global banks really benefit?  Or was it mostly Japanese banks that benefited?   Maybe banks weren't that global back in the 1970's and 1980's when this happened.  But back then it was Japanese financial institutions that benefited most from their financial deepening, I think.

So in the future, it may be Chinese banks, Indian banks and others that take a large piece of this increase.  But who knows.  It's just a thought that came to mind when I saw the slide.

Don't Break Us Up!
I don't know if this is directed at regulators or activist investors (probably both), but it's an interesting slide: 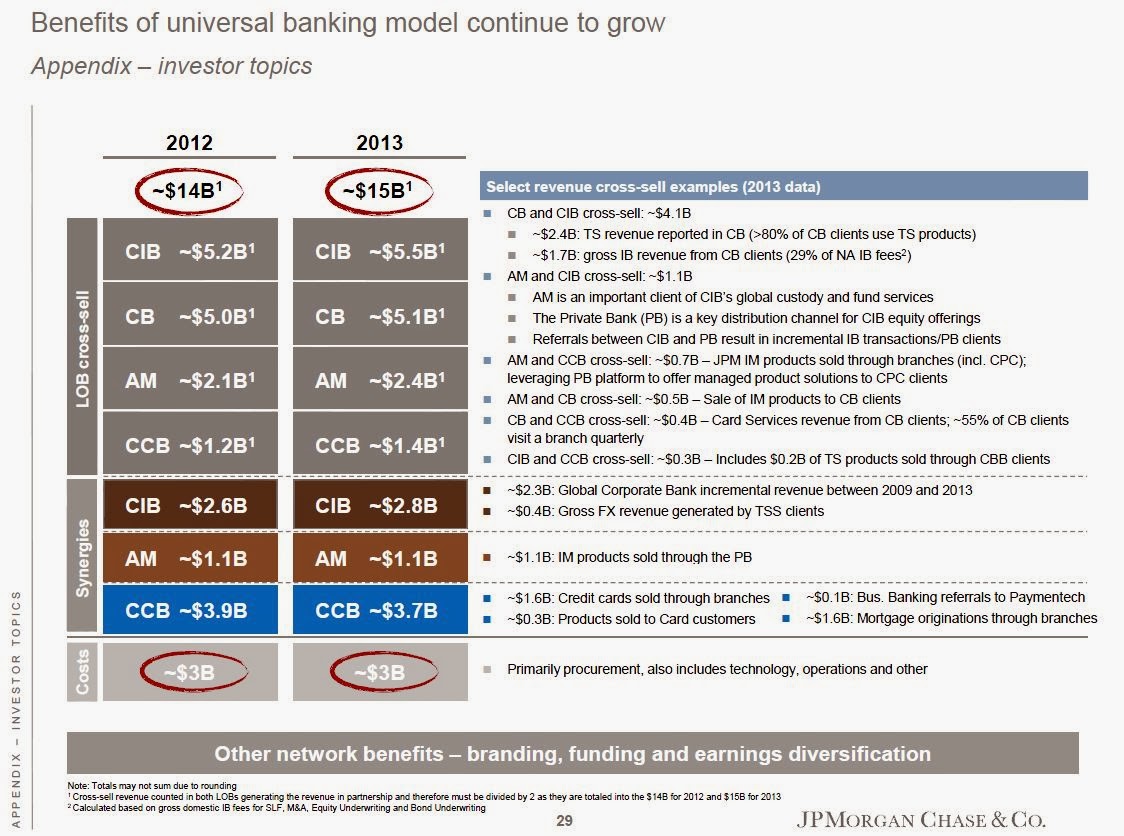 Divisions versus Peers
Here's a great slide that shows that JPM's efficiency at the line of business level is competitive with the best. 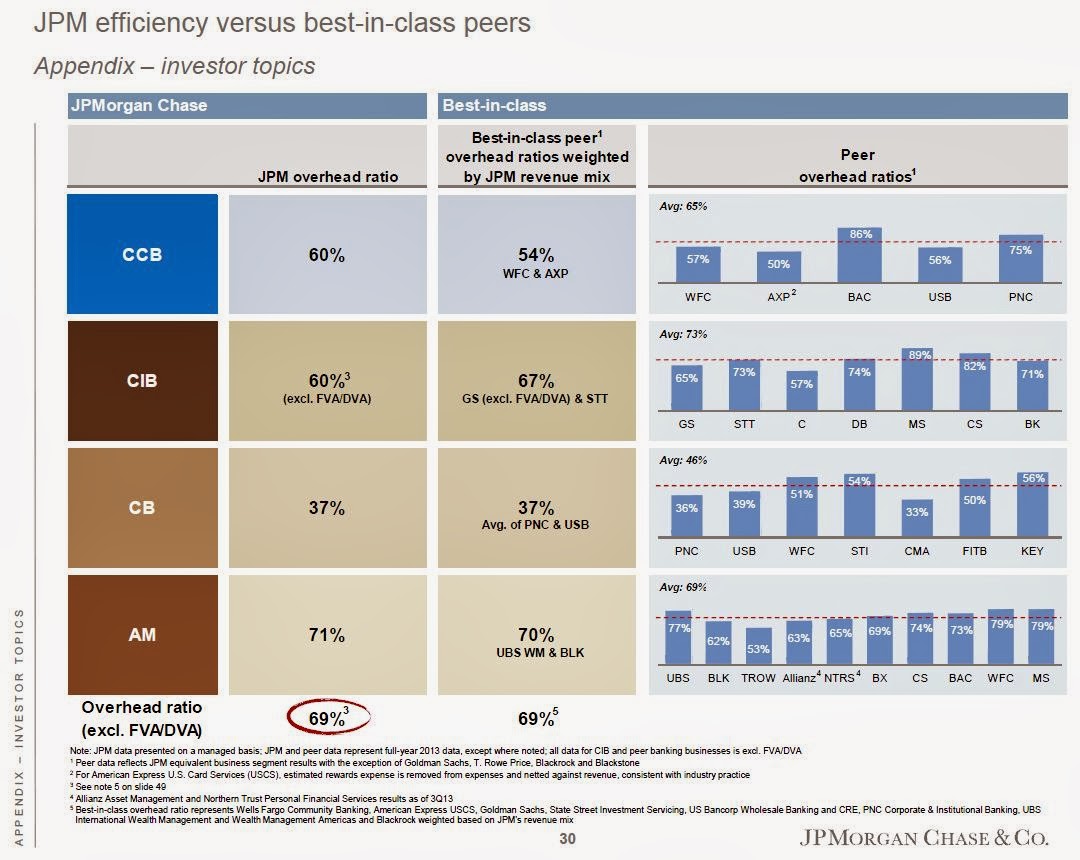 Investment Bank Dominance
And we mostly hear about how great Goldman is, but we forget what an amazing entity JPM's investment bank is.  Check out the table below and see how many areas they dominate versus peers.  It's an incredible chart: 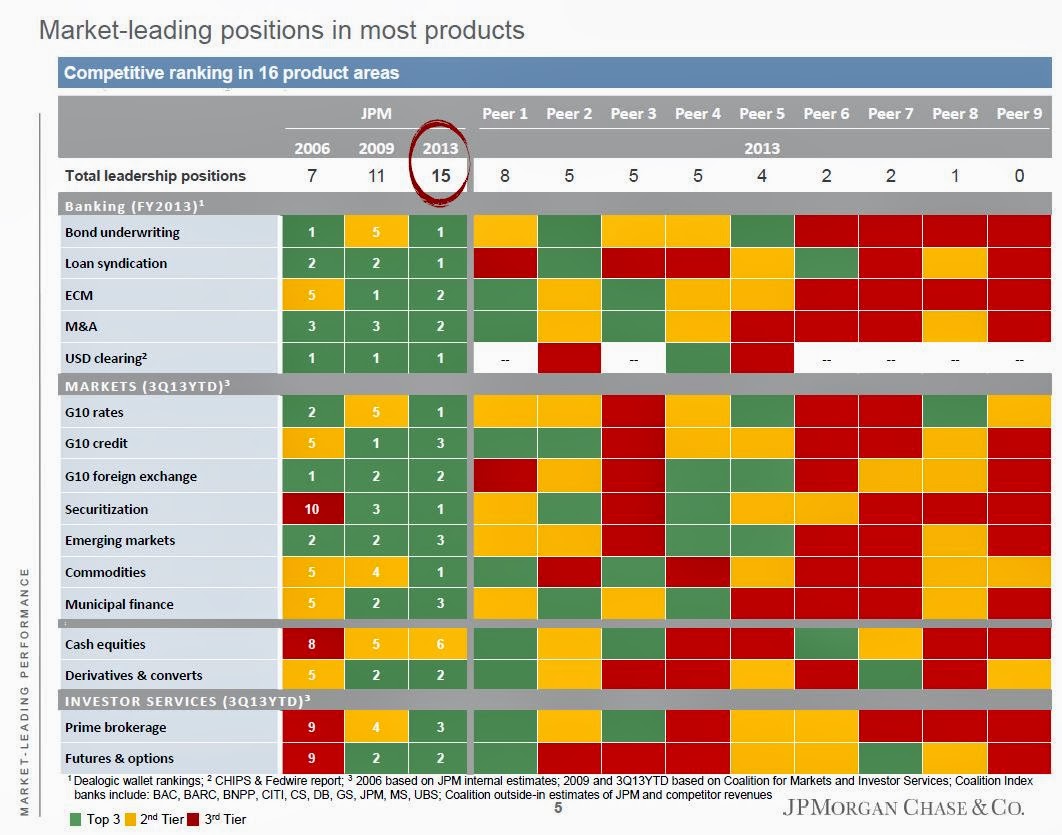 Conclusion
Anyway, I did listen to all of this live and some parts of it again later (replay) and I think JPM is doing really well, and the management (below Dimon) seems really good.  I liked what I heard.

JPM is certainly not as cheap as it has been in the recent past, but it still looks pretty interesting.  There is a lot of potential for when things 'normalize', like rebound in housing, interest rates normalizing etc...

There was a question about why with all this great stuff, increasing market share in various businesses and growth in many areas revenues are flattish.   Dimon's response was that revenues sometimes aren't that important.  They don't want bad revenues that aren't profitable.  So there have been runoffs, there have been pressure from NIM compression and things like that.  But he insisted there will be an inflection point.  These things will run off and revenues will start to reflect the strength of the franchise.

Of course there is always the risk of another recession.  In that case the stock price would certainly go down.  But JPM has proven that they can manage through the worst economic times.

I am really looking forward (as much as I look forward to Buffett's letter) to Dimon's letter to shareholders.
Posted by kk at 5:07 PM