Dimon sounded a bit frustrated on the 4Q 2014 conference call the other day and it is totally understandable.  Yes, JPM and other banks made some mistakes, but it's really strange how regulators are jumping on JPM.  Just like they jumped on Goldman Sachs too, when they were one of the better operators (Fabulous Fab notwithstanding).

Size ≠  Risk  (Regulatory Complexity = Risk!)
If we think back to the financial crisis, Citigroup was the only large bank to get into trouble.  The big failures, remember, were Bear Stearns (not even the biggest investment bank and not integrated; it was not too big or too complex at all), Lehman (same, this was not a global bank but an independent investment bank), AIG (this was not even a bank or an investment bank!  And I don't know that complexity had anything to do with it.  Bad trades were put on, basically, in two divisions).   Of course there was Countrywide, IndyMac, Wamu and some others.   (By the way, during the S&L crisis in the late 80's, the absence of size didn't seem to help much.  Sometimes it's more complex to deal with 1,000 small problems than, say, one big one).

I remember when a reporter for the Economist wrote that the beating up of banks and investment banks after the crisis is like when a fight breaks out in a bar.  Some people don't go find the guy that started it and punch him, but just punch the guy sitting next to him because he never liked him (and it was a good time to punch him).  That's sort of what it feels like.

Also, I'm not going to bother to Google it and post it here, but U.S. banks aren't even that concentrated (large relative to economy) compared to most other large banks in the rest of the world.  The deposit share of the large U.S. banks are much smaller than, say, Japanese, German and other banks around the world.  Are those banks riskier?  (well, if the answer is yes, it's for different reasons!).

So I don't agree that size = risk.  JPM, in fact, was (as Dimon keeps saying) the strong haven during the storm of the financial crisis.  They got through the crisis without losing money in a single quarter, and they had to buy some of the failing institutions to help bail the system out.

This is hardly proof that size = risk.

In fact, when the crap hit the fan, Goldman Sachs and others rushed to find a partner that had stable deposits (banks) so as to stabilize themselves.

What does that mean?  Are independent investment banks safer than universal banks? The real life stress test of the financial crisis seems to have proven that the integrated model might be sturdier.

Break Up JPM?
And the idea of breaking up JPM is an interesting one.  Honestly, I looked at that idea too a few times in the past and thought about making it a post here, but didn't because I didn't see it as a good idea.

First of all, JPM has done really well over the years due to the many different revenue/earnings streams it has.  The volatility of the investment bank can be smoothed out by the stable consumer business.

And too, a quick back-of-the-napkin look showed that it's not really all that interesting.

This is very crude and I'm sure Goldman and others have a better analysis, but here's my simple look at the idea of a split:

Value-Enhancement From a Split
I don't know what all the different parts would trade at, but the main things that are viewed as undervalued are the Investment Bank (actually, not the whole investment bank as GS is cheap, but the advisory business which seem to trade at high multiples (Greenhill, Evercore etc...) and Asset Management.

So assuming JPM trades at 10x P/E, this is what the market is implying these divisions are worth:

For the investment bank, you could use the $6.6 billion investment banking fees, but that includes underwriting and that actually takes capital and size to do.  Evercore and Greenhill are valued highly because they don't need balance sheet and distribution; they just advise on mergers etc.

That's why I used the advisory fees earned by the investment bank of $1.6 billion and used a 20% profit margin to get $320 million net income.  20% happens to be the net margin for the whole investment bank for JPM, but that's a lot higher than the margins at Evercore and Greenhill so I'm being generous.

So how would the market value these independent entities?  Well, asset management used to trade at a 20x P/E; I think it's lower now (Blackrock is at 16-17x) , but let's use 20x to be generous.  Also, boutique advisory firms used to go for 30x.

So using the above net income figures and new valuation, here's what they would be worth on their own:

Oh, and don't forget, synergies from this integrated model is $6-7 billion according to JPM's 2014 Investor Day presentation.  This synergy can come from all over the place, not just between these two entities and the bank.  But since Asset Management probably gets a lot of assets from JPM the bank, a lot of it might be from there.

If a split makes these companies independent, then that $6-7 billion might go away. Yes, maybe not.  We don't know where those synergies are.  But let's say it goes away.  What is that $6-7 billion in net profit worth to shareholders?  Let's just use the lower 10x that JPM trades at.

That's a possible $60-70 billion decrease in value due to un-synergies!

Splitting the Whole Investment Bank Itself
OK, so you may be wondering, wouldn't the bank itself be worth more without the investment bank?  Maybe.  But here, in the above scenario we are just ripping out the good businesses; Asset management and Advisory.

Well, the banking businesses had net earnings of $11.8 billion.  I'm looking at Consumer and Community Banking and Commercial Banking.  If the multiple on that goes from 10x to 12x, that's an enhancement of $23.6 billion in total value, similar to the above splitting off of the high value pieces.

And the same argument about synergies may apply.


Capital
Oh yeah, it's not that simple.  There is a cost to being big and integrated (and diversified, stabler and more Gibraltar-like).  There is that extra capital for the bigger, more complex banks (how about lower taxes for entities that have to deal with unnecessarily complicated multiple regulators?!  Banks seem to have to play a game of Twister to keep everyone happy.  It's a miracle they are still in business!). 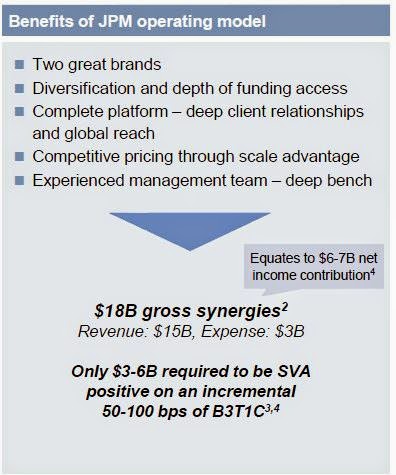 The net income contribution assumes 50% overhead ratio and 38% tax rate.  Cost of equity is 12% based on some CAPM model they used (5-year average).

But check it out.  They only need $3 - 6 billion in gross synergies to be SVA positive (Shareholder value added) on incremental capital requirement.   By the way, that equates to $1-2 billion in additional net income.

So looking at the G-SIB requirement of 2.5% (JPM falls under the 2.5% bucket), let's see how much additional capital they need to hold.  Risk-weighted assets at year-end was $1.6 trillion.   2.5% of that is $40 billion.    So JPM needs to hold $40 billion more in equity capital than others, just because they are big, sturdy, safe, diversified and rock-solid.

Assuming a 12% cost of equity capital, JPM needs to earn at least $4.8 billion in incremental net profits to justify being a Systemically Stable Important bank (remember, they were a stabilizing force during the crisis; how about negative capital requirement for that?!).  As shown above, the synergistic effects of the current integrated model is $6-7 billion.   So already, they are earning enough to more than offset that added capital requirements for their current model.

And from there, if further capital is required, as it says in the above slide, they only need another $3-6 billion (in gross synergies), or $1-2 billion on a net income equivalent basis.

But you will notice that they already earn $6 - 7 billion extra from the current model versus the $4.8 billion needed to make up for the 2.5% G-SIB, so they are already earning enough to make up for another 50-100 bps in capital.

I'm sure, though, that JPM will keep refining pricing and products so that they will more than make up for further capital requirements.

Conclusion
OK, so this was quick and crude so you can nitpick this and that.  I know there are other businesses within JPM that earn high ROE's, but I don't know about tearing them apart and then slapping high multiples on them.  If you do that, then you have this huge corporate piece left over.

For me, the idea of a spin-off or split to enhance value was mostly about splitting off the asset management business.  That's where the multiples differential seems to be the highest.  And the advisory business too.

But ripping the whole investment bank away probably wouldn't change the value much as Goldman Sachs, Morgan Stanley and others are not valued any higher than JPM.  It might make the lone bank trade higher (12x vs. 10x), though.  Plus, the fact that the two independent pieces would not be able to smooth each other out would suggest higher earnings volatility, lower balance sheet stability and lower credit rating, so it might be value destructive.

But I don't know.

What I do know, though, is that it seems like:

So I think the "break up JPM!" crowd is wrong.  It may not enhance value.  I think much of JPM asset management AUM comes from the bank and investment bank.  On it's own, they don't have any of the distribution infrastructure like Fidelity and other independent fund companies.  To build this out would probably take a lot of time and money.

Too, the advisory business on it's own would have to work harder to get business.  Oh yeah, and think about how JPM got the Shake Shack IPO partly because JPM was their banker!  That's synergy right there, right?  (OK, SHAK is not an advisory client, but an underwriting client)

And for regulators, I think they're wrong! It's not the banks and financial institutions that are too complicated.  It's the regulations and regulators!!  Simplify that alphabet soup of regulatory entities and stop making the banks play a game of Twister trying to satisfy this and that rule from all different directions!

As usual, things are just bass ackwards, and I can see why Dimon is so frustrated these days.