I spent yesterday listening to the JPM investor day on their website (replay).  They have a bunch of great slides so if you are interested in JPM at all, I would highly recommend at least flipping through them.  There is a lot going on there that looks really interesting.

Anyway, as usual, this is not going to be a summary at all; I'm just going to point out things that interested me.

As usual, JPM is doing really well despite higher capital requirements.  Here's the usual chart that I like: 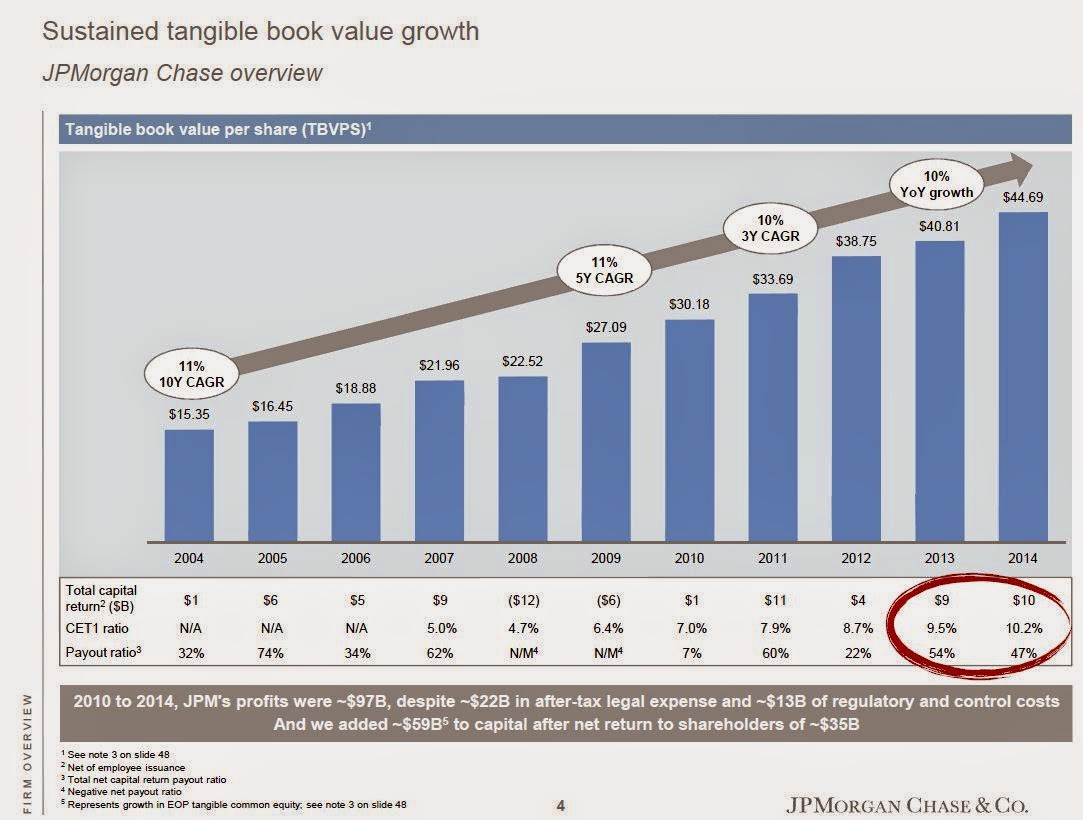 JPM grows their TBVPS at a remarkably consistent 10-11%/year.  What is really striking about this chart (and I keep saying over and over) is, where is the financial crisis?  Where is the whale trade?   This is based on raw TBVPS so doesn't include dividends paid.

And much of this consistency comes from the diverse set of businesses: 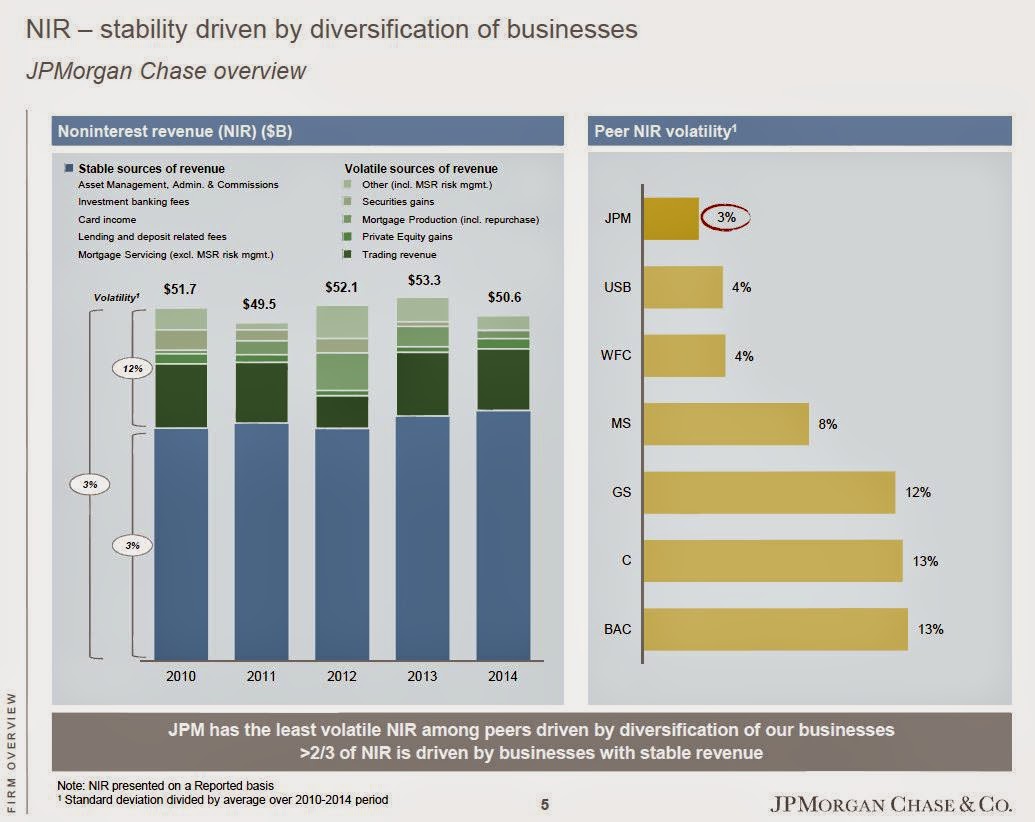 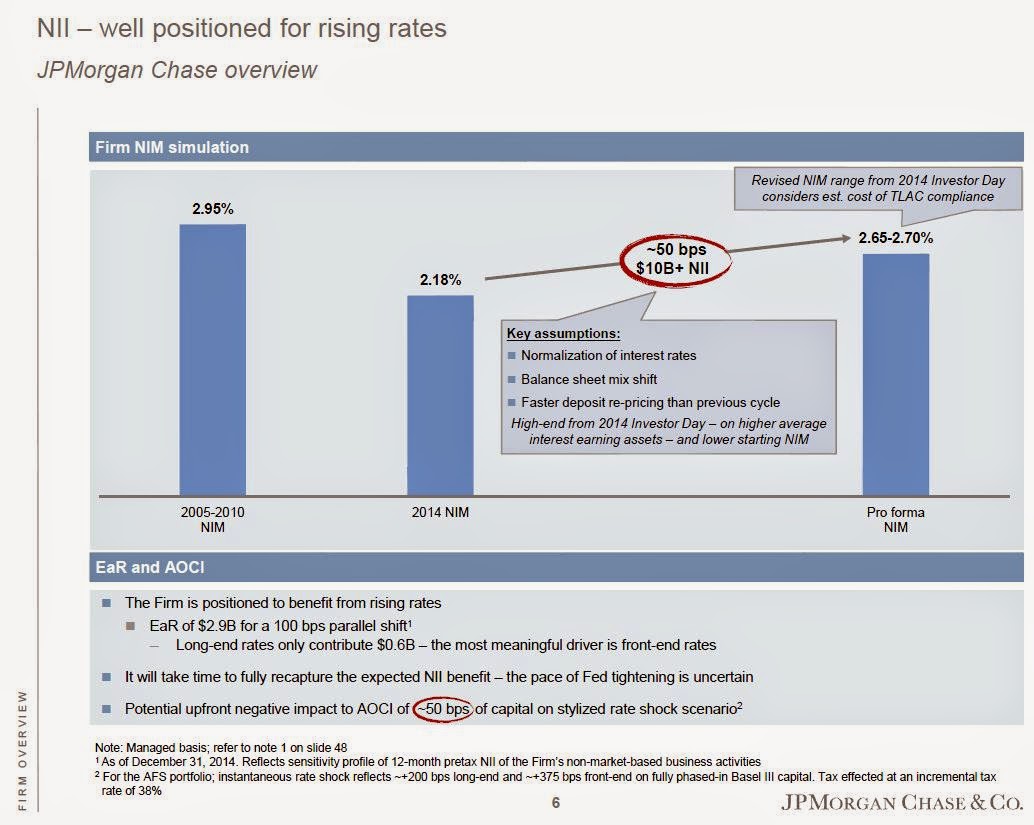 We'll look at this interest rate stuff again later in their earnings simulation.

But first, here is a comparison versus peers: 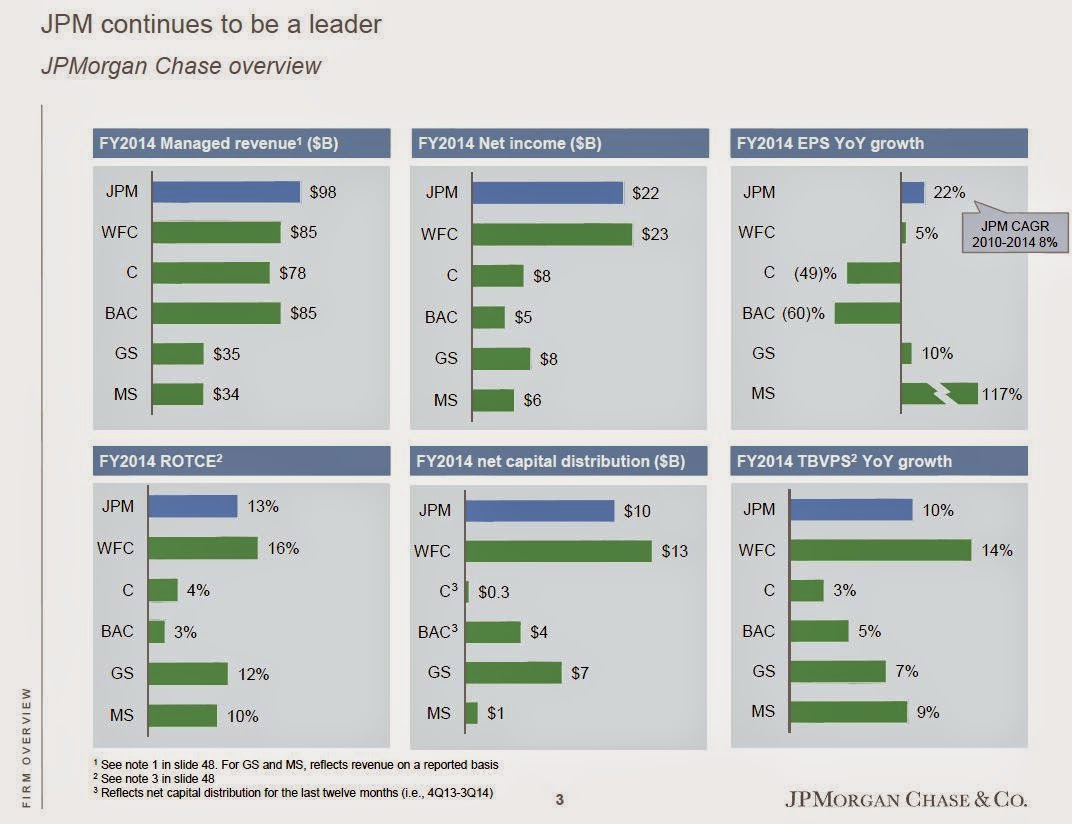 JPM looks good against peers, but what's really amazing is their stability.  Look again at this slide and then the one above that shows the non-interest revenue volatility. 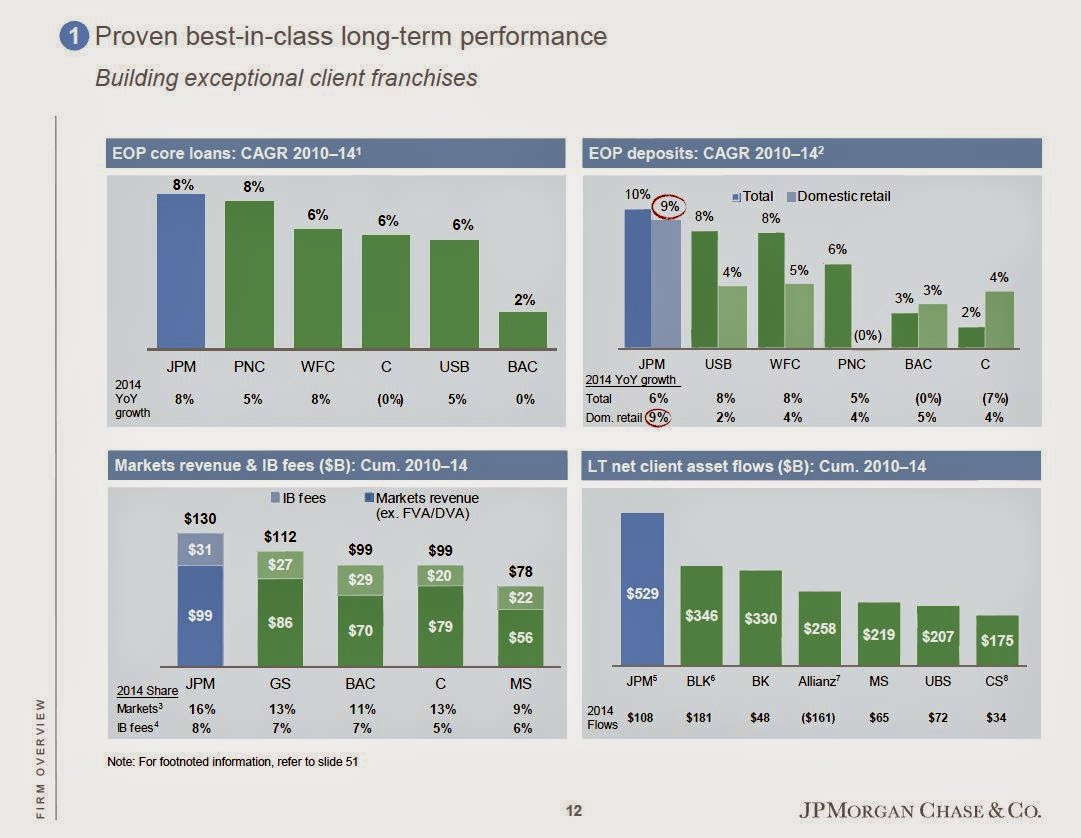 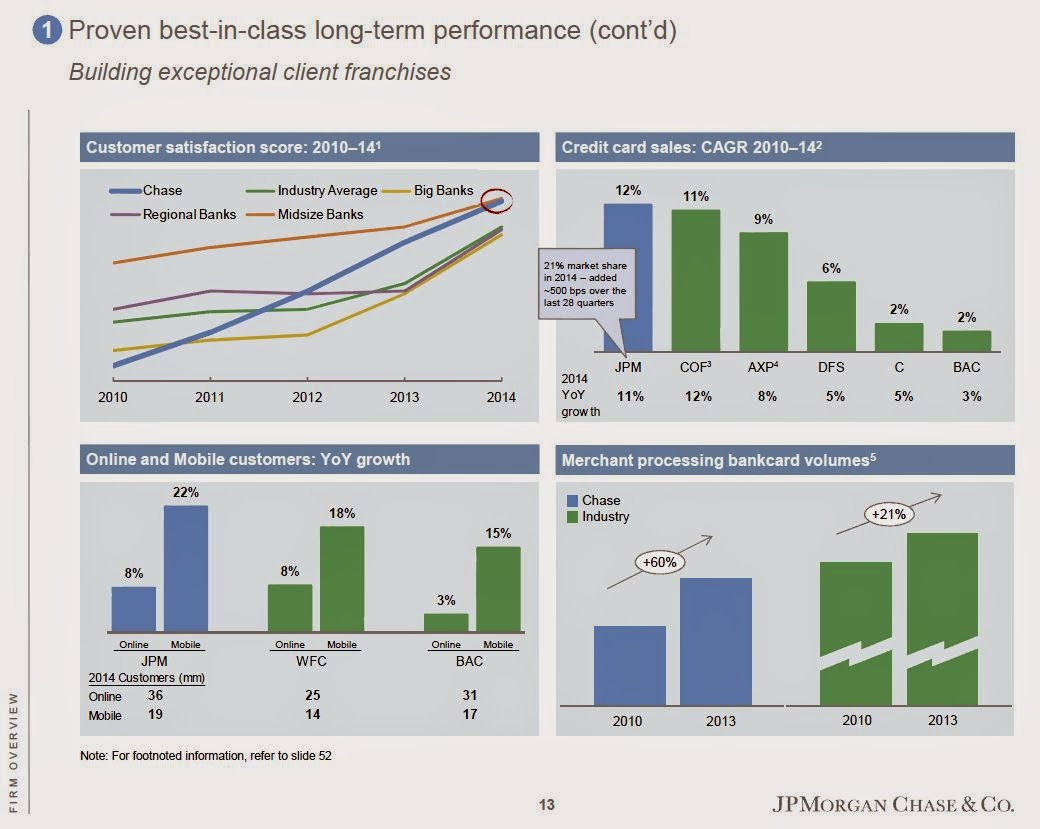 The customer satisfaction score is amazing when you think about what these big banks were like only a few years ago.  They were really awful.  This is from the 1990's, but I remember when I opened an account at Chase.  This was a completely random thing.  At the time, I walked into a building and there was a Chase branch and a Citi branch.

So I walked into the Citi branch and walked up to the customer service desk and said that I wanted to open an account.  There was a 80's-big-haired lady sitting there chewing gum and filing her nails.  She didn't even look up at me when she said, "I'm on break.  Come back later...".  I was like, "What?".    If she's on break, why is she sitting there at the front desk (or the concierge-like table closest to the entrance)?

Shocked, I just walked across the hall to the Chase branch and opened an account there with no problem.  I've heard great things about Wells Fargo too from someone who recently got a mortgage there.  It's amazing how times have changed.

Valuation
And here's an interesting slide showing how JPM is undervalued: 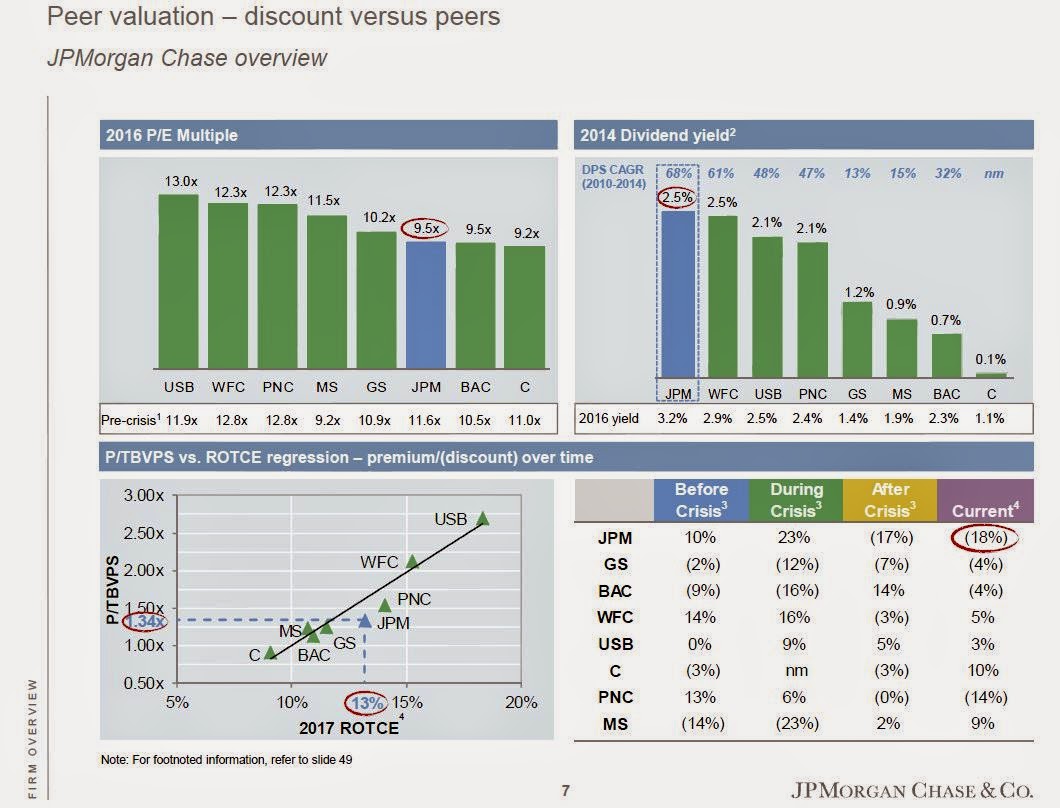 The pre-crisis P/E in the top left chart is based on next-twelve months earnings estimate P/E average from January 2005 to June 2007.

Dimon on JPM Valuation
During the Q&A at the end of the day, Dimon talked about valuation.  He said that the stock is cheap.  His personal opinion is that this cheapness is temporary.  He said the market is wrong.  The market is always wrong.  And it means nothing to him.  JPM will always do the right thing for the right reason.  Someone asked about a conglomerate discount and Dimon said that JPM is not a conglomerate.  Conglomerates are groups of unrelated businesses, whereas JPM is in related businesses.   So he doesn't feel the valuation discount is due to it's structure.

Huge legal and regulatory costs and uncertainties related to them, he feels, is why JPM is at a discount now.  But he feels those things will eventually subside and JPM "may well trade at a premium".

Split-up
The segment presentations often mention the benefits of being part of JPM.  In the overview slides, there were a couple of slides about splitting JPM and how that would not be a good idea at this point.   There are two points that I noticed given my post about it earlier this year.

And the other point is that I used last year's investor day slide so used 2.5% for the G-SIB capital requirement, but in December the Fed jacked that up so JPM falls into the 4.0%-4.5% bucket.  But that analysis is also moot because JPM says that the capital release from a split would only amount to $15 billion, so there isn't that much of a capital benefit from a split-up.

But anyway, here are the slides: 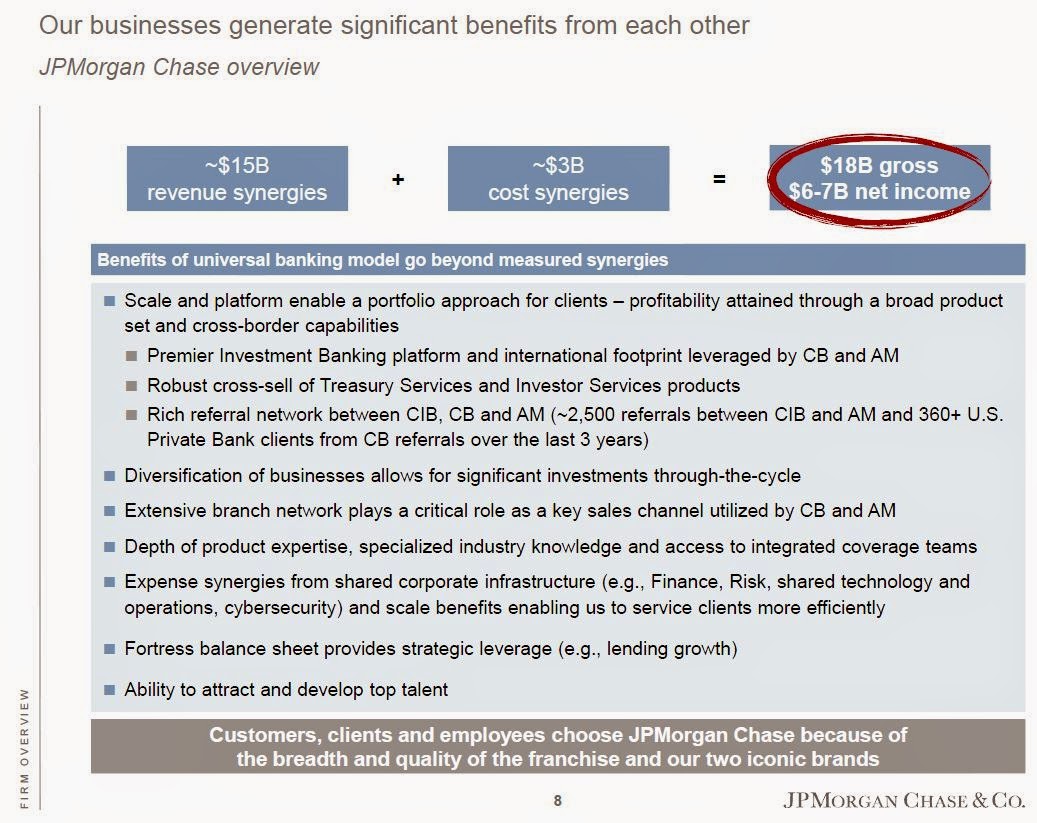 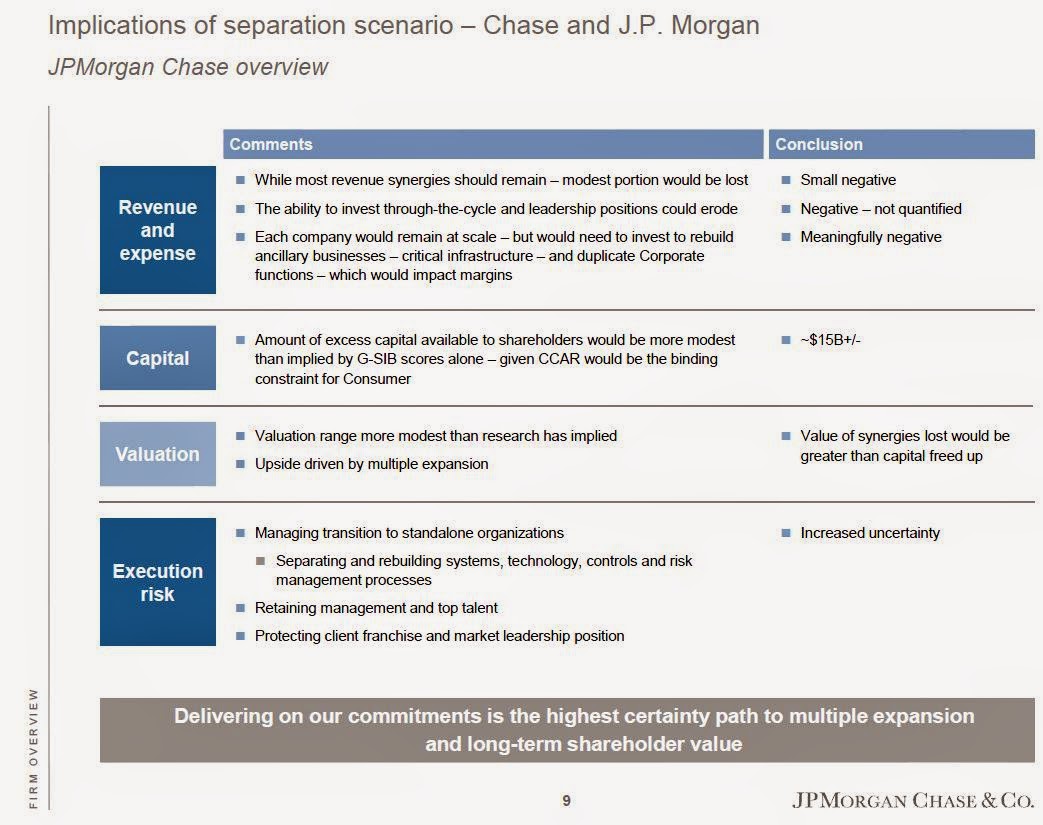 I still think the diversification effect is one of the main benefits to JPM's business model.

Here's another slide that sums up benefits to JPM's current model: 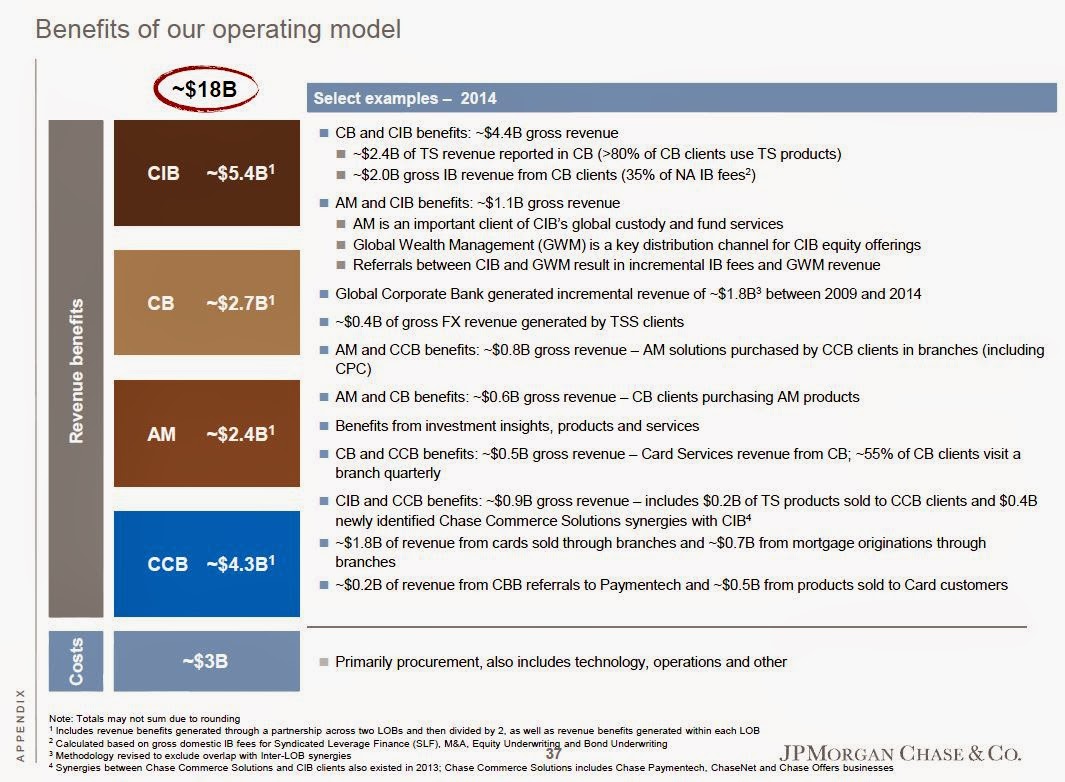 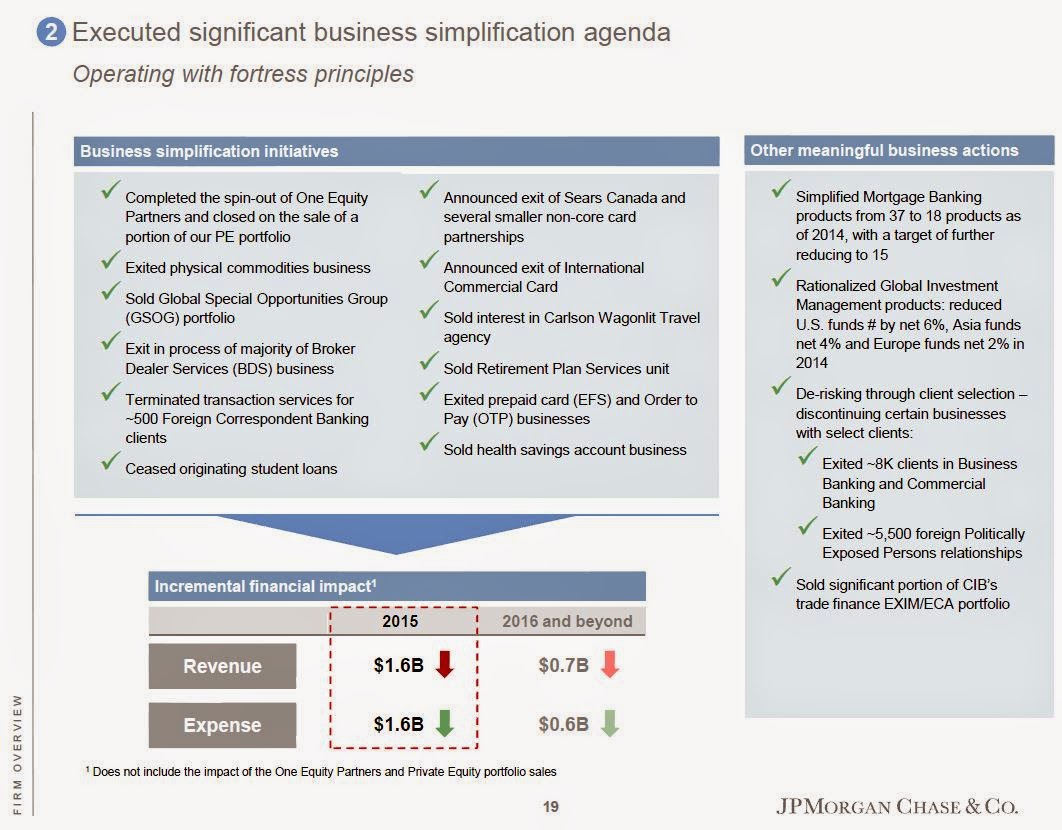 They exited businesses with basically no P/L impact.

Earnings Simulation
So this is the main slide that most investors are interested in.  What can JPM earn in a more normalized environment?  What can they earn over time? 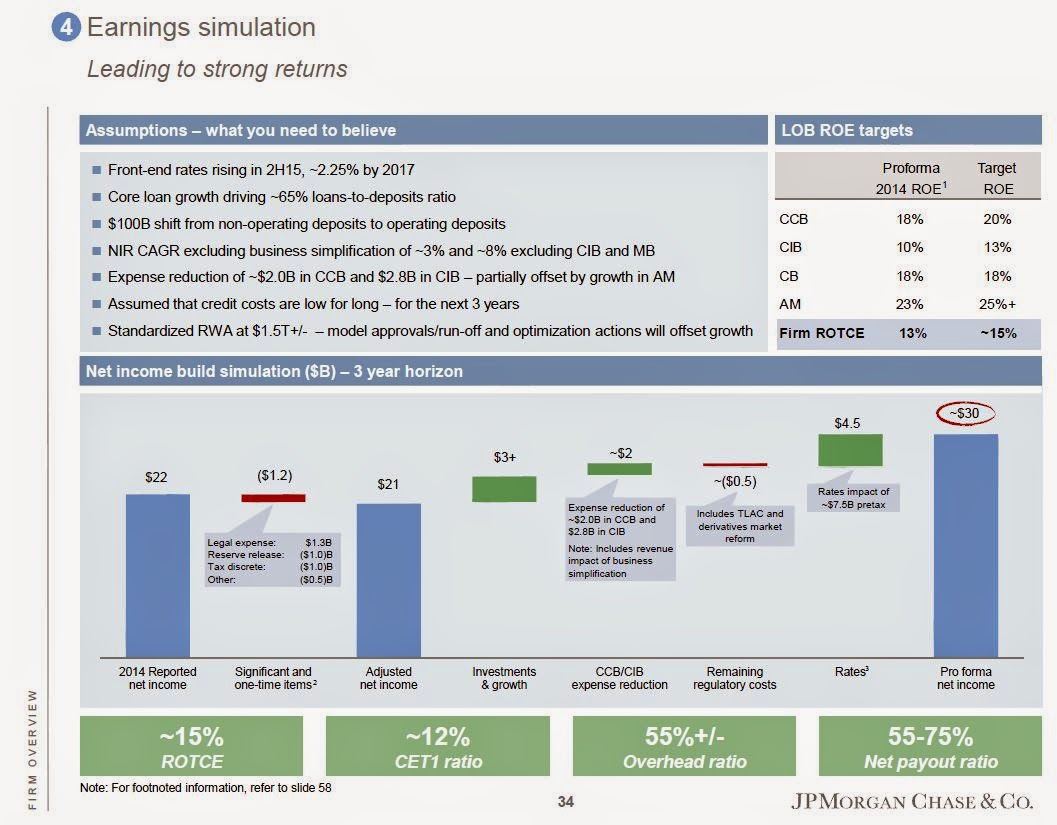 JPM sees net income of $30 billion by 2017 (or I should say JPM will have earnings power of that much).  In 2014, there was $1.1 billion in preferred dividends paid and $544 million of "undistributable earnings allocated to participating securities" between the net income line and net to common shareholders.  So that takes net to common down to $28 billion or so.    With 3.7 billion currently outstanding (which may go down from repurchases), that's $7.57/share in EPS.  At a pre-crisis P/E of 12x, JPM can be worth $91/share.    JPM is now trading at around $61/share.

But there are a lot of "if's" in this return projection.  Rates have to normalize and the stock has to get to a pre-crisis P/E ratio by the end of 2016.  The earnings simulation holds no such contraints; they will get there at some point and the stock price will eventually follow.

This earnings simulation used to not be a projection over a given period of time, but just a guidance on what JPM can earn when certain things normalize; it showed normalized earnings power.  I suppose it still is, but there are components in there that have a three year time frame (cost cuts, interest rates normalization etc.).

I guess it would be fair to say that this $30 billion net is not so much a projection, target or forecast, but more of the earnings power of JPM if the currently ongoing projects (that will take three years) are completed, interest rates normalize etc...

So let's look at the components a little bit.  Regarding "investments and growth", I think those are things already happening and they probably have good visibility; open a branch and get xx in deposits etc.  "Expense reduction" is something that JPM has been able to achieve so that's probably not an issue.  They will get that done.

By the way, the Fed Funds futures implied rates look like this:

Also, the simulation assumes low credit cost over the next three years.  This, usually, would be aggressive given the cyclical nature of credit.  But one thing you can say is that the credit quality of loans on JPM's books is much better than in the past.  Also, the economic recovery has been very subdued.  This suggests that there may not be a lot of systemic problems being built up in the banking industry ready to blow up any time soon.  So this may extend or prolong the cycle since there isn't some big party going on somewhere in the economy.

Abby Joseph Cohen of Goldman Sachs long ago called the U.S. economy a silly putty economy.  She said that the economic cycle was prolonged, with shallower highs and lows; as if the cycle was printed on silly putty and you stretch it out sideways so that the booms and busts occur over longer periods of time.

It sort of feels like that now in the U.S. so maybe credit costs remain low.  I would have more confidence in the $30 billion number, though, if they used a more normalized, "through-the-cycle" credit cost instead.

The above simulation, I think, doesn't assume any dramatic changes in the environment, though, other than interest rates.  There is no big housing recovery or global economic recovery or anything like that built in.  So I would think it is conservatively estimated.

So here's a cool slide.  People often freak out about how big JPM is.  And the number they throw around is total assets. $2.6 trillion sounds big.  It sounds so big, in fact, that it must be dangerous!

This slide shows that the balance sheet has grown, but it has been mostly low risk cash that has grown.  They have $600 billion of high quality liquid assets (HQLA) on the balance sheet.  On the other hand, VAR and level 3 assets, two other things people seem allergic to are down 50% since 2010. 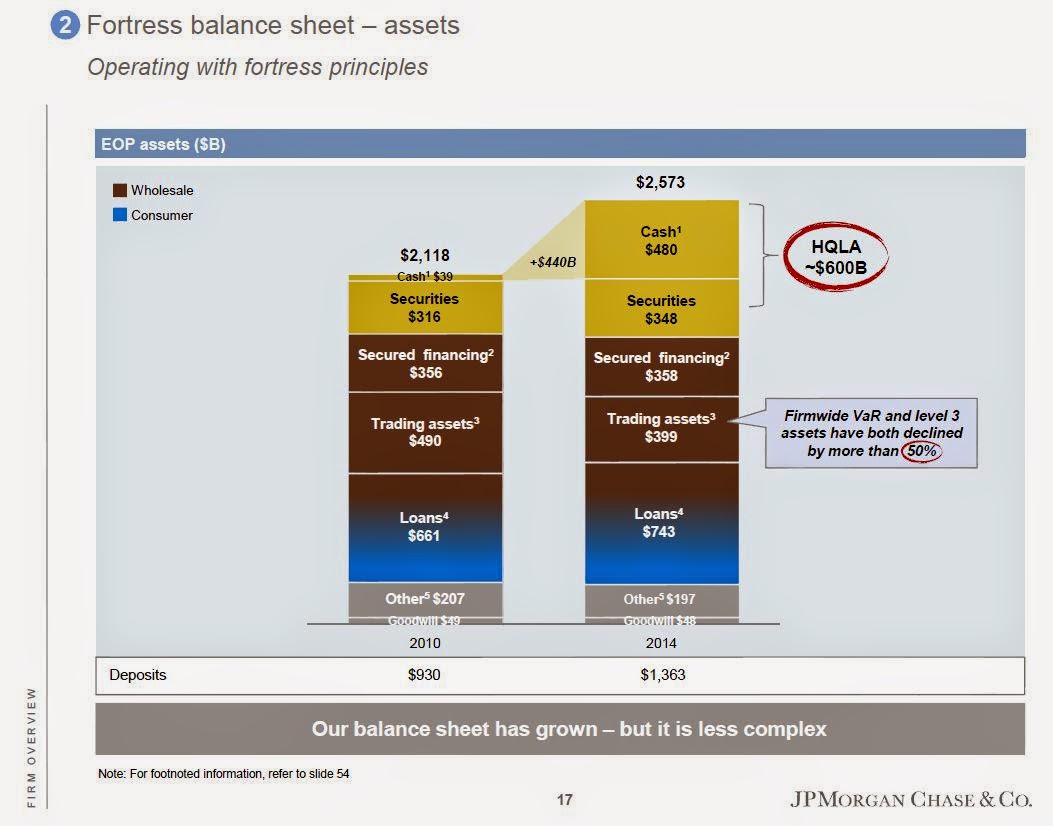 Conclusion
JPM looks really good.  The various segments look good.  The investment bank isn't looking too great now, but they are still very profitable with strong franchises and a lot of levers for growth over time.  It seems like they are managing to higher capital requirements.

There are obviously a lot of risks, but for me, the one thing that still concerns me most is the interest rate structure.  Everyone is waiting for some sort of normalization.  But the Japan scenario still nags at me as a possibility.  It's true that Europe imploding, causing a strengthening dollar might keep already low rates in the U.S. lower for longer than we expect.

But still, JPM is one of the best managed companies on the planet and it is trading at a very reasonable level, and there is a clear path for higher earnings going forward.