So 3G/BRK made their move and Kraft it is.   Buffett was on CNBC this morning and he said that BRK paid $4.25 billion for common stock in Heinz initially and will pay another $5.2 billion to get this deal done for a total common equity investment of around $9.5 billion.   After this deal closes, BRK will own around 320 million shares of the new Kraft-Heinz of a total 1.22 billion or so shares outstanding.   That puts BRK's cost per share at just under $30/share.    KRFT closed at $83.15/share yesterday.   Taking out the $16.50/share special dividend that will be paid out to the old KRFT shareholders (and BRK won't get), that puts the ex-dividend price of KRFT at $66.70/share, so that's roughly a double for BRK.  BRK also owns preferred shares and warrants.

$66.70/share and 320 million shares owned means that this stake is worth $21 billion, and this would be a listed stock holding.

This is great news for people who think BRK's equity portfolio is too financials-heavy.

As a refresher, check out BRK's equity portfolio at the end of 2014: 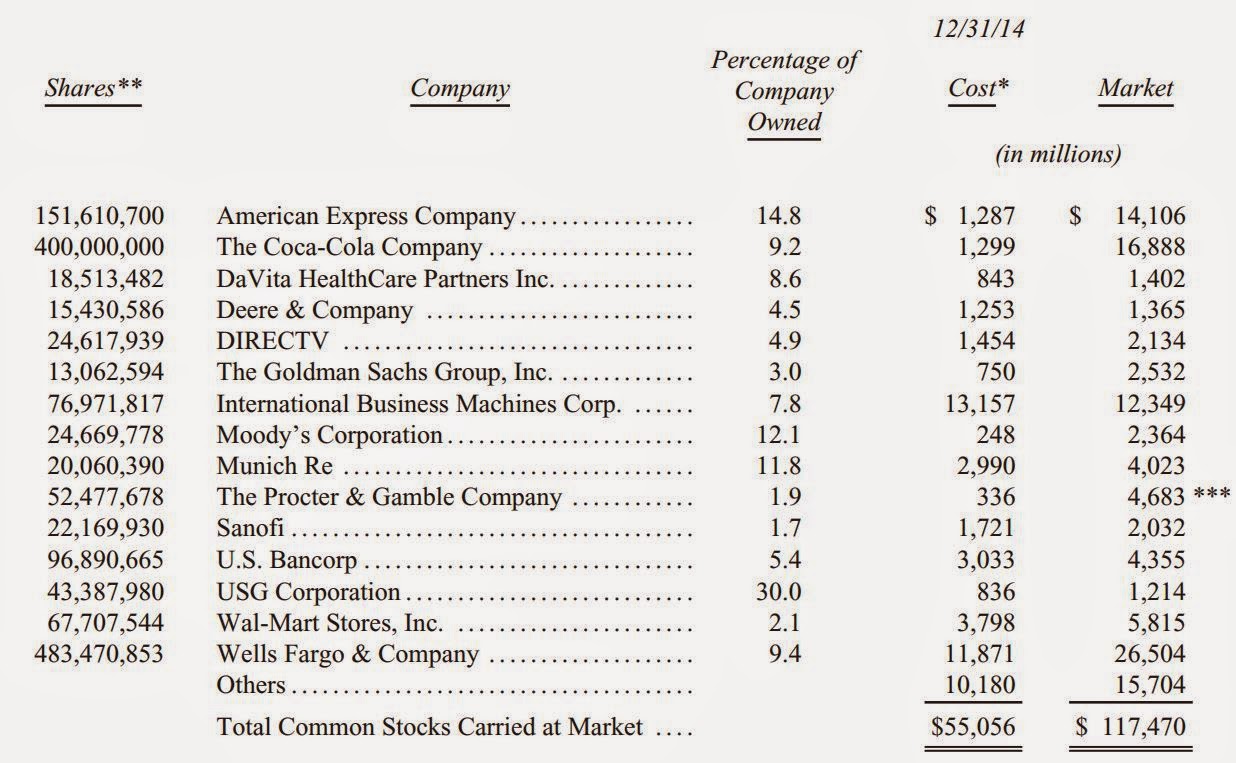 So this would be a gigantic position, second only to Wells Fargo.

What are They Paying for KRFT?
This is an unusual deal.  Usually, mergers/acquisitions are for cash, listed stock or some combination of them.  This one is a combination of cash and an unlisted stock.  So there is no fixed value (as in an all cash acquisition) or market value (price of acquirer's stock) to measure this deal against.

I wonder what merger arbs do in this case.  Usually, they buy the stock against a fixed price (in an all cash acquisition), or they buy the target and short the buyer against it (in a stock-for-stock merger).  Here, what do you do?

I guess you can view the $16.50/share special dividend as sort of the premium on the deal.  KRFT's pre-announcement price was around $62/share so this premium is around 27%.  KRFT shareholders receive $16.50/share in cash and one share of the new Kraft-Heinz for each KRFT share.

But let's say yesterday's closing price, $83.15/share is the acquisition price.   What is the valuation at this level?

So the current price implies an acquisition price of 26.4x P/E, pretty high.

EBITDA in 2014 was $3.6 billion (both the above EPS and EBITDA exclude a non-cash charge for post-retirement benefit expense), and EV is around $56 billion so that comes to 15.6x EV/EBITDA.

Price After Synergies
That seems high.  But they said there is $1.5 billion in synergies to be expected.   If we adjust the above figures, we can get $5.1 billion in EBITDA; that would bring the deal price down to 11x EV/EBITDA post-synergy.  For EPS, we can add $1.5 billion after, say, 30% tax and using 588 million shares.  That would add close to $1.80/share in after-tax earnings per share.  Add that to the $3.15/share and we get $5.00/share post-synergy EPS.  That brings the acquisition price down to around 17x P/E.    11x EV/EBITDA and 17x P/E is very reasonable.

What is the New KRFT Worth?
Well, this is the key issue.  The above acquisition price is sort of circular.  The more we think the post merger entity is worth, the higher the old KRFT price will go up, and the higher the acquisition price will look.  Even if the current KRFT stock price went up a lot, the cost to HNZ to acquire KRFT will not increase at all as the cash portion is fixed, and the stock portion will not increase. Regardless of how high the old KRFT goes, shareholders will still only receive one new share of the new KRFT.

Anyway, let's take a look at the post-merger valuation of KRFT.  First of all, we have to adjust the current price for the $16.50/share special dividend that will be paid once to the old KRFT shareholders.

Ex-dividend, the new KRFT would be trading at around $67/share.    There will be 1.22 billion shares outstanding, and net debt will be $28 billion.  This includes repaying the preferreds to BRK and replacing it with debt.   Therefore, post-merger, the EV would be around $110 billion.

Adjusted EBITDA at HNZ in 2014 was $2.8 billion, and the old KRFT had EBITDA of $3.6 billion (again, this excludes the post-retirement benefit adjustment so will differ from what you may see elsewhere).   That gives us total EBITDA of $6.4 billion.

On this basis, the new KRFT is already trading at 17.2x EV/EBITDA.

P/E
We'll start with the combined $6.4 billion EBITDA.   Take out D&A for both of $961 for an EBIT of $5.4 billion.   Take out $1.2 billion of interest expense and we get $4.2 billion in pretax income.   But this interest expense actually doesn't include $8 billion of preferreds, which will be refinanced with investment grade debt.   They say current HNZ debt and this preferred stock will be refinanced by investment grade debt, but let's just use 5% for now.   That's another $400 million of interest expense (for the preferreds that get refinanced at 5%).  So pretax income is actually $3.8 billion.   (It's a little complicated, but I think the preferreds don't show up in the Heinz 10-K because they are at the parent company level.  The 10-K only includes financials of the subsidiary and not the parent (that's why you don't see preferred stock on the balance sheet or preferred dividends in the income statement)).

Growth
By the way, even though they won't give us long term guidance on growth, one of the major factors in this deal is growth.  Most of KRFT's sales are in the U.S. while HNZ has 60% of sales outside the U.S.  The idea, like in the Burger King/Horton deal, is to use HNZ's global distribution platform to increase sales of KRFT products around the world.   This is probably too aggressive, but just imagine if KRFT's sales breakdown evolved to something simliar to HNZ's; a double in sales?

Margins
By the way, the old KRFT had these margins:

After 'synergies', their margins would be:

For the new entity, the margins would be:

After synergies, this would be:

For reference, here are some comps; their current valuations and margins:

*For K, I used "comparable" figures, which exclude charges.

With the best margins out there (and similar to KO), there shouldn't be a problem with the new KRFT trading at 22x P/E and 14x EV/EBITDA.   Yes, we are assuming the $1.5 billion in synergies get realized, but when you look at what 3G has done in the past, I don't have any doubt it will be realized.

For reference, here are some figures from the HNZ merger proxy back in 2013:

This is what the comps were trading at back in 2013.  Maybe this is not so useful but it's good to look at everything so...


The results of the analysis were as follows:

And here is the precedent transactions of comps:


Selected Precedent Transactions Analysis
Centerview analyzed certain information relating to selected transactions since 2000 in the food industry with transaction values over $3.5 billion that Centerview, based on its experience and judgment as a financial advisor, deemed relevant to consider in relation to Heinz and the merger. These transactions were:

No company or transaction used in this analysis is identical or directly comparable to Heinz or the merger. The companies included in the selected transactions are companies with certain characteristics that, for the purposes of this analysis, may be considered similar to certain of Heinz’s results, business mix or product profile. Accordingly, an evaluation of the results of this analysis is not entirely mathematical. Rather, this analysis involves complex considerations and judgments concerning differences in financial and operating characteristics and other factors that could affect the public trading or other values of the companies to which Heinz was compared.
For each of the selected transactions, based on information it obtained from SEC filings, FactSet, Wall Street research and Capital IQ, Centerview calculated and compared transaction value as a multiple of LTM sales and LTM EBITDA, with LTM EBITDA excluding one-time expenses and non-recurring charges. This analysis indicated the following multiples:


This analysis indicated the following mean and median multiples for the selected companies and for Heinz:

This analysis indicated the following mean and median multiples for the selected transactions and the merger were as follows:

Moelis then used its professional judgment and experience to apply a range of selected multiples derived from the selected transactions of 11.0x to 14.0x LTM EBITDA to Heinz’s LTM EBITDA as of the announcement date of the merger. This analysis indicated the following implied per share reference range for Heinz (rounded to the nearest $0.25), as compared to the per share merger consideration:

Moelis determined that a fair value range for HNZ, based on previous food company deals, was 11.0x - 14.0x LTM EBITDA.

So according to this, KRFT is currently trading within range.  Keep in mind that the new KRFT is going to have tremendous margins and some real growth opportunities.

Conclusion
So this deal looks really interesting.  Some people are skeptical of these cost-cutting deals but I think the 3G guys are really good.  Sales is not growing at HNZ currently because they were rationalizing their SKU line-up, cutting unprofitable lines etc.

The right way to look at this is that the special dividend itself is the acquisition premium.  Something around 30% is typical in takeovers.

That sounds like a good deal to me.  You get a nice premium, and you end up with a better stock than you owned previously.  You were stuck with sort of a no-growth situation and suddenly there is hope.

The new Kraft-Heinz (synergies are already priced into the above metrics) would not only have better margins, but also a much more interesting and promising growth profile than the current KRFT.

The post-announcement rally in the stock price has pushed up the valuation of KRFT to $67/share on an ex-dividend basis, so the current pro-forma valuation is more like 22x P/E and 14x EV/EBITDA. This is at the high end of food companies, but they will also have margins at the high end and greater growth prospects.

This is a first pass look at this deal, sort of a back-of-the-napkin look so I am probably missing a few things here and there.  There are a lot of moving parts here and others will make different adjustments than I made so may come up with different figures.

And there are things that we don't know yet.  The merger proxy should be very enlightening in that sense.

Anyway, this is kind of an exciting deal; it will be fun to follow.