Last November, I wondered if Nomura should abandon their global ambition and just focus on their domestic business.  I have thought that for a long time since they have run into problem after problem over the years in their overseas business.

The recent insider trading scandal forced the resignations of the CEO and COO and the new CEO is someone who comes up from the domestic sales business and the talk is that they will be scaling back their global operations.  I do think that's not a bad idea at all.   The CEO/COO that resigned were responsible for the Lehman acquisition too, which seems not to be turning out too well.

Anyway, here is an update of the tables I showed last year.

First, this is the GAAP data from their 20-F filings through the end of March 2012: 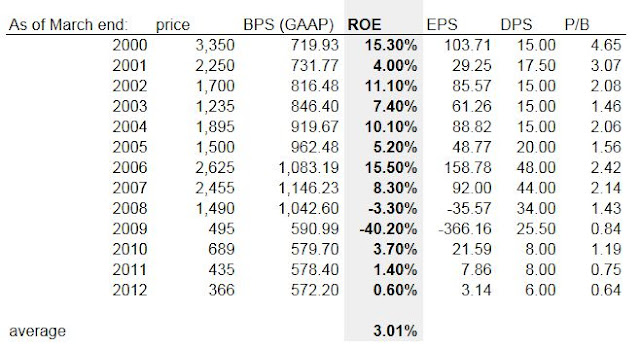 Global Nightmare
OK, so here's the big problem.  Below is the pretax profits by region since the year 2000 through the end of March 2012. 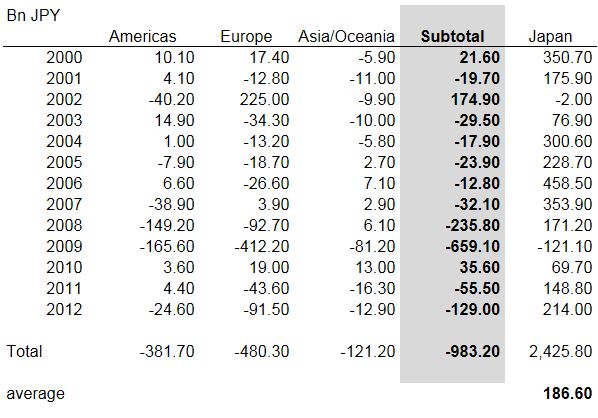 So their non-Japan business lost money in 10 out of the last 13 years.  It is absolutely mindboggling.  I took a quick look at Goldman Sachs and they didn't lose money in Europe last year.

OK, so last year was bad for Europe, and yes, 2008/2009 was the financial crisis. But even without those years, look at how often they lose money overseas.  During the bubble period of 2004-2007, they still lost money in their international business.  What the heck is going on?!   And the Asia region has been doing well too over the past 10, 15 years and Nomura has been active there, and yet there are no profits from that region either.

Look at the right-hand column labeled "Japan".  The Japan business has been profitable in 11 of the past 13 years despite the lost decades in Japan, ongoing bear market etc.  Conditions are horrible in Japan for the financial markets, and yet they have been profitable in just about every single year over that time period.

I haven't worked out the figures, but there is no doubt that Nomura would be a much more valuable business if they didn't bother trying to expand globally.  They would require much less capital so their returns on capital would have been higher, they would have avoided the hugely dilutive capital raise after the financial crisis etc.

Why Do They Fail Consistently Overseas?
I really haven't done research on this, but my impression is that one major problem is that Nomura tries to keep too much control of their overseas operations.  For example, the CEO of Nomura in the U.S. is an expat from Japan.  This has been the case for most of the time Nomura has operated in the U.S.

This may be the same with Toyota and Honda, for example, but there is a major difference.  In the case of Toyota, when they come to the U.S., it is the Japanese headquarters that has the skill, knowhow etc. to run the business; the factories etc.  This is why it's totally fine to have Japanese employees come to the U.S. to run factories here; they are implementing the knowledge used in the Japanese factories which is their strength.

Didn't Einstein say that insanity is doing the same thing over and over and expecting a different result?  Nomura is insane.  Really.

I may be wrong, but I think the European banks in the U.S. finally started to succeed only when they abandoned that and gave authority to the locals.  They stopped trying to co-CEO and even co-head every division with someone from Germany, for example.

So?
So anyway, I don't mean to pick on these Japanese companies.  Of course I would love to find a reason to buy these stocks as they are cheap (nominally).  As I said before, I have been wanting to be bullish on Japan for a long, long time.  That's why I still keep looking, and I will keep looking at these large names (more to chew on than smaller companies where I may not have much information and therefore not much to say even if they may be reasonable investments).

I think the best scenario for Nomura is to focus on their domestic business and eventually be bought out by a large international bank that might want exposure in Japan (more likely is that they merge with a Japanese bank to create a Japanese version of JPM).  This won't happen until Nomura cleans up their global operations (which may be very costly to unwind with severances, buying out contracts, unwinding legacy private equity positions and other investments etc.).

Some things just seem so simple and yet seemingly rational people will just not act rationally.