Not to beat a dead horse, but this Wells Fargo situation kept lingering in my mind so I thought I'd make this followup post.  It is well understood by value investors but since I have a pretty wide readership in terms of stock market experience, I thought I'd post this because there is something to be learned from thinking about WFC, Buffett and how the market works.

OK, so I cheated as we don't have BRK's 2012 BPS yet.  BRK five and ten year periods are through 2011.  But I don't think it makes a difference in the story it tells.  WFC's performance is just amazing compared to BRK.  It has beaten BRK in every single year, and in most years by a pretty wide margin.  This is unbelievable.  And this is the decade that included the financial crisis?!   You'da thunk BRK woulda done better than a major bank with tons of mortgages.

Go through the table again, starting at the top and slowly look at both figures, year by year, and imagine the headlines in those years.  You would never have guessed the outcome of these two entities in any of these years.

There is a tremendous bias against banks these days, but if there wasn't, Mr. Buffett's thinking should be as clear as anything.  You would be insane to call for him to be buying back BRK stock when he can be buying WFC at an attractice price.

In fact, if Mr. Buffett starts to buy back large amounts of stock when WFC is trading at these levels, this is what I think should happen: 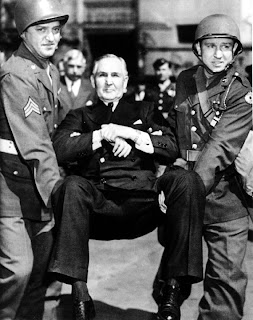 I am not tech savvy enough to cut and paste Mr. Buffett's face over Sewell Avery's.  But yes, if he chooses to buy back BRK stock (right column) over WFC shares (the left column in above table), that would mean he has finally lost his marbles.  Call in the troops.  Take him away!

Back to Bullet Points

Anyway, this can go on and on so I'll stop here.  I thought it would be an interesting post for some (but same old, same old for us value people).