I may be jumping the gun here as Loews (L) annual report hasn't come out yet, but since the 10-K is out I figured I would just update some numbers.

Last year I made a post about adjusting L's book value by adding or subtracting the difference between the market value of publicly listed holdings of L instead of adding up the sum of the parts. The problem with summing the parts for me was trying to figure out what the rest of L was worth, and figuring out what tax rate (if any) to apply to the market value of the listed holdings.

I figured that if I just adjust the equity of the listed holdings on L's balance sheet by the price-to-book ratio on the subsidiary's listed stock, that would reflect them at current market value.  Plus, I would know how much gain or loss there would be if the positions were sold.  I thought it was an elegant solution (and a very simple one).   For example, if L carried something on it's book at $1.00 and the stock traded at 1.5x book, I can just adjust the $1.00 by multiplying it by 1.5x.

This year, I noticed some problems with this approach (the equity on the L's balance sheet and on the subsidiaries balance sheet sometimes don't match;  Boardwalk Partner's (BWP) equity is much smaller on L's balance sheet than on BWP's own because of deferred taxes and other things).

Also, it tends to be quite sloppy.

So I completely redid my calculations, but this time simply took the number of shares owned by L, multiplied by the stock price and then looked at the difference between that and what was on L's balance sheet (the assets, liabilites, total equity, minority interest etc. for each of the subsidiaries can be found at the back of the 10-K).   In the case of CNA, I had to add back the preferred shares it sometimes owned as that is included in the equity on L's balance sheet, but wouldn't be reflected in a market value calculation if you took the number of CNA shares held and multiplied it by CNA's stock price.

Anyway, enough boring details.  (I also did find one error, but it doesn't really change the gist of the story much).

Book Value
In 2012, BPS grew +4.6%, and +5.12% if you include dividends paid.  Dividends paid reduces book value, so looking at BPS growth alone doesn't tell us how well management did.  So I often look at BPS change including dividends (add dividends paid to the year-end BPS and then calculate change in BPS; this would be sort of a comprehensive ROE.  Keep in mind that this may not be a figure that an investor can compound at because dividends will be taxed and reinvestment may not occur at book value).

So using this BPS plus dividends figure, here is how L has done over time:

So L has grown at a pretty consistent 10% or so, beating the S&P 500 index by a good margin and comparable to Berkshire Hathaway.  1999 is when James Tisch became CEO, so the performance since 1999 reflects his performance.

As we saw in the table, L's book value per share has grown at a faster pace than the S&P 500 index. It lagged in the bubble years of the 1990s, but has been going straight up since 2000: 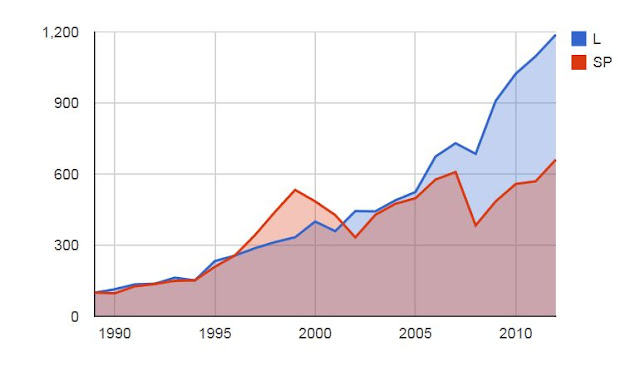 And here's the L stock price versus BPS: 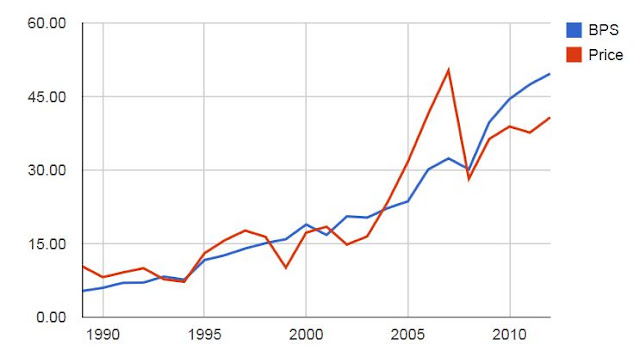 This chart shows the spike in 2007 caused by the Diamond Offshore (DO) rally.  It seems like L has traded near book value most of the time and is now trading below it.

Long Term Performance
Since I don't have data going all the way back, I just look at stock price performance over time for long term comparisons.

Here is a chart of Loews stock (including dividends) over time compared to the total return of the S&P 500 index.


Loews versus S&P 500 Index (both include dividends) 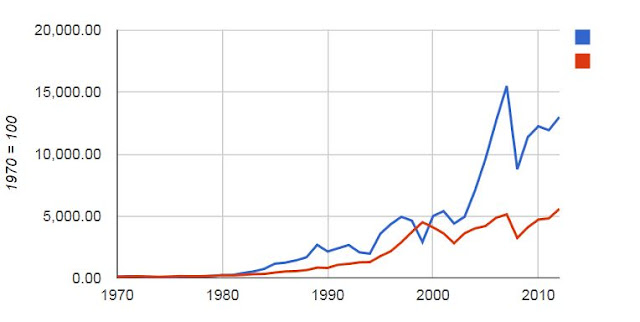 
Adjusted Book Value
So getting back to adjusted book values, below is the table I posted last year but the figures for adjusted book values are all recalculated.  These should be much more accurate than last year's, even though it doesn't really change the story at all. 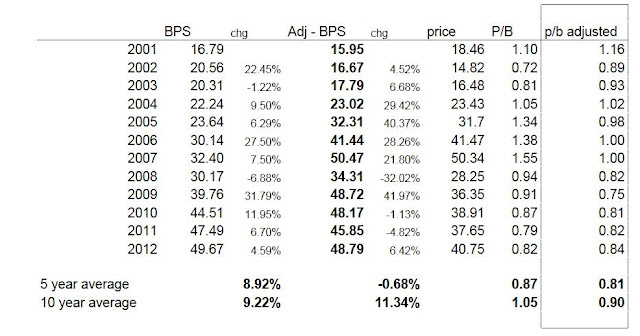 The listed subsidiaries that were 'adjusted' in this table are CNA, DO and Boardwalk Partners (BWP).  There was a tracking stock for the Carolina Group and that would have an impact on adjusting the book value, but that was spun off so I didn't bother; it might change values in some periods, but wouldn't change the end result over time (the tabacco business value was realized when they did the exchange offering swapping Lorillard shares for L shares in 2008).

I didn't include the 2% general partner interest of BWP in the adjustment.  The GP interest is on the L balance sheet, but my market cap adjustment only takes into account the common and class B units.

Current Adjusted Book Value?
Assuming all else unchanged and just updating the current stock prices of DO, CNA and BWP, the current adjusted BPS comes to $51.70/share compared to L trading now at $43.22, a 16% discount.

But Wait!  More Adjustments: Incentive Distribution Rights (IDR)
As I said, in the above adjustments I excluded the 2% GP interest in the market value adjustment, so that actually has to be added back.   The market cap of BWP is now $6.2 billion, so the GP interest would be worth around $127 million (market cap only includes common and class B units).   With 392 million L shares outstanding, that comes to $0.32/L share.

That's not that much but the real value here is in the incentive distribution rights (IDR) that the GP owns.  Over a certain amount of cash distributions to the common unit holders, the GP is entitled to an escalating percentage of distributable cash.

So the more distributable cash they can create per unit, the more the GP will get paid.  In the last four quarters, BWP has already been paying $0.53/share so anything above that the GP gets 50% of it which is kind of insane when you think about it; it only represents 2% ownership but will get 50% of cash distributable above $0.5250.   That's pretty sweet.

I haven't looked at BWP closely so I have no idea what their prospects are and how much they can grow distributable cash per share, but I assume there is plenty of growth potential (or else why would L be involved?).

Without knowing anything about BWP, it's hard to put a value on what this IDR is worth.  It sort of reminds me of LUK's Fortescue notes in that way.

Anyway, even if I don't know anything about BWP (I will take a closer look later and I'll let you know if I learn anything worth posting about) I do know what they have earned up to now.

The payments made to L by BWP for this IDR were:

So this has been growing.  I don't know enough to make any projections and am too dumb to come up with anything else, so let's just put a 10x multiple on this cash flow.

That would make this IDR worth $300 million.  Again, that's assuming no growth but we notice these payments have been growing.  And don't forget, above a certain threshold, the GP gets 50% of incremental cash distributions.  If someone wants to say it will keep growing, I won't argue with them.

Taxes
Oh yeah, and I haven't assumed any taxes on the above calculations.  In recent years, unrealized gains seems to be offset by losses (note the deep discount to book value of CNA).  So it would be a wash.  Plus, these folks tend not to pay taxes.  I think any monetization will come through spinoffs, exchanges and other tax efficient means.    Part of the discount in L stock might be due to people applying 20% discounts to the value of publicly listed holdings for tax and liquidity.  It may be the correct way to look at things, but I'm not convinced enough to put it in my valuations.

Conclusion
Anyway, this is a really boring stock, I know.  Not much ever happens there; conference calls usually end in 30-40 minutes after the same questions.  I bet if they just picked a random conference call recording from the past and played them (instead of holding real conference calls), nobody would notice.

But I still think it's a solid holding and they are very, very conservative.  Boring doesn't mean it's not a good investment.  If you want excitement, go bunjee jumping.

I wouldn't worry too much that they aren't shooting the lights out in recent years.  They have been very cautious and conservative deliberately and that's their choice.  Sure, they aren't doing mega-deals like the unworried Buffett, but L has proven that they can do well even with their cautious stance.

Anyway, I'm sure I'll have something to say once their annual report comes out.