During the financial crisis I did pretty well.  I bought up some financials and other things and did pretty well coming out (having done well going into it too), but one of my biggest misses was Liberty Media.  I have no excuse for missing that as I did own it in the past and did very well with it and so was very familiar with John Malone and his various assets.  I sold out when I thought media assets were overpriced with deals being done at 15, 20, 30x EV/EBITDA (or something like that).

But during the crisis I was so focused on the financials and was so convinced that the biggest gainers coming out would be the financials that survive (and the financials seemed to be the scariest sector to even look at, which I liked) so it didn't even occur to me to look at Liberty.  I did buy CBS and other stocks in other sectors and did very well with them too, so I guess it's not so much that I was only looking at financials.  I don't know why, I just totally missed it.   I think the Yacktman fund nailed this one.

Here is a description of Liberty Media's stock price performance from the LMC 2012 annual report (it's interesting to note that Berkshire Hathaway recently took a stake in Liberty Media.  Weschler (One of BRK's new fund managers) has owned it in the past in his own fund, I think)):

So if you invested in Liberty back in May 2006, you would have earned 33%/year through March 2013.  That's an astounding rate of return no matter how you look at it.   And this stock was down a ton during the crisis and I didn't buy it, knowing that it was run by one of the greatest operators of all time! That's pretty shameful.
To rub it in, let's look at a chart. This chart is from the Liberty 2012 10K:
﻿ 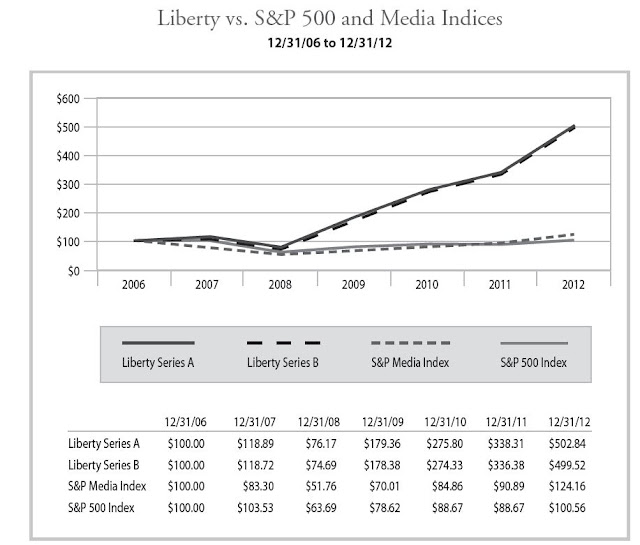 ...and this is the actual chart of Liberty Media (which spun off LMC and changed into Starz):
﻿ 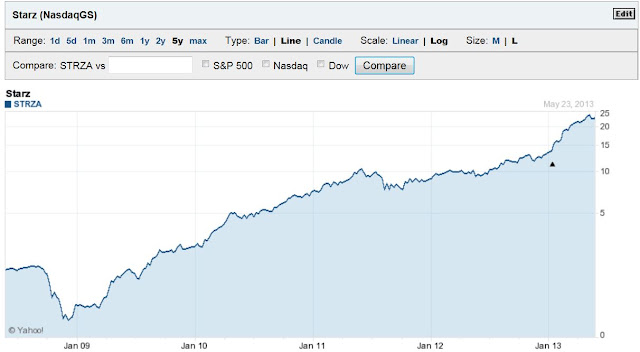 If you bought some stock back in early 2009, you would have had a 25-fold gain.  Makes buying Bank of America look stupid in comparison; even the LEAPs.
If you even put just 10% into Liberty and 90% was held in cash (or investments that did nothing), you would have gained 36%/year since then.
Sure, there's no point in shoulda, woulda, coulda's.  There are tons of those.  We can't ever always get everything.  I know.  But this one was sitting right under my nose.  I've owned it before, I've owned Discovery Communications, I've always been a fan of content and never had any doubt that content would have value (and would increase value over time as more and more people would need it), knew who John Malone was etc.  There is no excuse for that.
Anyway, this would have been a career making investment (and surely it was for some; it's just that we don't hear all the stories!); kind of like Ted Weschler's W.R. Grace trade (or maybe Weschler bought a bunch in 2009!).
Next time you sit around and people are talking about finding the next subprime trade (black swan), next great bubble to short or people whining that markets are too efficient now to make the old Buffett partnership or Greenblatt-type returns, go back and look at this chart and say to yourself, "where was I and what was I doing?!"
OK, enough of that.
I may come back and take a look at Liberty and some of the other pieces of the Malone Media Complex later on.
Charter Communications (CHTR) / Malone Inteview on CNBC
But for now, what I actually wanted to do was to just post a summary of Malone's interview on CNBC not too long ago.  It was an extended interview and it was fascinating for many reasons.  It's not often that we get to hear a great investor talk about what he did and why he did it.  In this case, David Faber of CNBC asked Malone why he invested so much in Charter Communications (CHTR).
We all know Malone built his wealth in the cable industry so it's not surprising that he is going back to it.  But it is sort of surprising in that for a long time, I have looked at the content providers as where the value was in the business and the pipe-owners as not so valuable (as competition keeps increasing).
Anyway, here are some notes from that interview.
And specifically on CHTR:
The other way to look at CHTR (as Malone put it):

On TCI sale to ATT:

Interesting Situation
So this is an interesting situation.  Malone just bought in and is just beginning to do something here.  Tom Rutledge just joined a little over a year ago.  This is also a post-bankruptcy play as one of the stocks we talk about here (Oaktree) sold a big stake in CHTR to Malone.  I suppose it's not so much a post-bankruptcy play anymore since it's up 3x or so since reemergence.

But the fact that it is reemergent, the stock seemed to be hated and despised (due to the leverage, view that old cable is dead etc...), they got a new CEO that is "by all accounts the best operator/manager in the business" and then the greatest investor/operator in the business just bought a giant stake (and wants to do something with it), and it has big tax loss carryforwards makes it pretty interesting.

Of course, this is also risky in that it is very leveraged.  A lot of people think interest rates are going to go a lot higher and that leveraged companies will get into trouble sooner or later.  This is definitely not BRK at book value or JPM at tangible book.  I tend not to think that rates are going higher as I am a little biased to the deflationary side (Japan-style).

It's an interesting opportunity to get on board with some amazing people in the early stages of something, but there is risk here.

I was going to do some work on the valuation but I think so much of the value here is what Rutledge and Malone can do going forward (and the deals that will come down the pike).  Otherwise, the key factor in valuation is the net operating loss, which we know Malone and Co. will figure out how to use.  For other money losing operations it's hard to think NOL's will ever be realized, but when you get Malone involved, you know it will be realized sooner or later.


More Special Situations
Anyway, the stock market has come a long way since I have been sort of pounding the table on it since starting this blog in late 2011 (I loved financials, the stock market, and hated gold.  Not to brag or anything...  well, I hated Japan and Sony too, but I did expect a hard bounce on any weakening of the currency so it was not too surprising even though the speed and magnitude were.  I'm still on the fence about Japan; every few years there is this renewed enthusiasm that seems to fade.  I remember the Koizumi boom too...  Maybe I will make a post about Japan some other time).
And I will keep covering and talking about the financials since I do feel comfortable talking about them.  But since they may be getting into more 'normal' territory than 'cheap' (well, they are still cheap, but they've come a long way), I think I should start looking at other stuff.  I do look at other stuff, but posted mostly about financials.
I always wanted to talk more about special situations here, but frankly, since late 2011, the special-est situations to me were the financials.  They were great companies with great managements trading for really cheap for irrational reasons.  That is less and less the case these days so I want to look around at other stuff.

Since markets are no longer so unloved as I thought it was in 2011, I will have to dig around a bit more to find stuff to write about (and invest in, even though I am still long a lot of financials).