Is the Next Teledyne the Old Teledyne?

OK, so I've known about Henry Singleton and Teledyne for a long time.  Buffett has said that he was the greatest capital allocator of all time.   Since I read the outsider CEOs book I got to thinking about Teledyne again.  I am embarassed to say that I have the book, Distant Force: A Memoir of the Teledyne Corporation and the Man Who Created It, by George A. Roberts (published in 2007), but haven't read it yet.  There are a lot of great books in my pile that I haven't gotten to.

Anyway, having read the outsider book, I obviously needed to bring that book up to the front of the queue.  And in the back of the book, there is a CD included with all the annual reports from 1969-1995.  This got me really excited, but unfortunately, I don't know what that stuff is since the 'annual reports' don't seem to include any financials or 'letter to shareholders' or anything like that.   They are scientific articles, basically.  (By the way, here's a business idea:  I would pay for a century worth of annual reports of companies, wouldn't you?   Say, like, all the Coca-Cola annual reports from 1900 - 2012 or something like that.  That would be fascinating to me. Even complete sets of companies that no longer exist would be interesting!)

So I surfed around the internet and duh, I realize that Teledyne (TDY) is still a listed company.   I figured TDY didn't exist on it's own and they were parts of other large corporations by now.  But TDY merged with someone in 1996 but was spun out again in 1999 as Teledyne (along with other parts of the old Teledyne, Water Pik (PIK) and Alleghany Technologies (ATI).  Water Pik was bought out by private equity and ATI is still listed (now I see why Joel Greenblatt was on the board of ATI; it must have been spin-off related).   All of this stuff is in the book, by the way (the merger and the spinoff, and the chapter "Teledyne Renaissance" written by the then (at spin) and current CEO Dr. Robert Mehrabian).

But then again, who cares, right?  TDY was a Henry Singleton story.  Singleton is no longer around so who cares about TDY?

I was surprised, though, at how well it has done since the spinoff.

Danaher (DHR) preview
Before I go on, though, someone in the comments section in my other post about the outsiders book mentioned that Thorndike wanted to do one more chapter but the management didn't want to talk (the guess was Leucadia which I agree is a good candidate).  Well, someone else mentioned in another comment some companies that were run by outsiders and one of them was Danaher (DHR).   DHR is a name that comes up when you talk about industrial conglomerates that are really good allocators of capital and I have looked at them in the past; shame on me for not owning any! 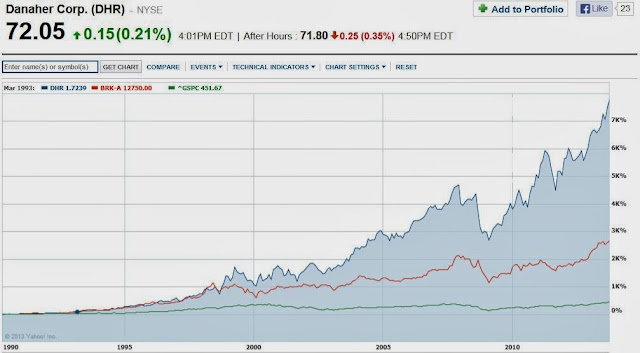 This is the stock price performance of DHR since 1990 or so.  The red line is Berkshire Hathaway, and the green line is the S&P 500 index.  This is just nuts, isn't it?

So wait a second.  How does this compare to the other outsider CEOs?  I will cut and paste from my original post and see how DHR compares:

OK, so anyway, DHR is a great company too.  Not completely unknown.  I will look at it in a later post but for now I would point out that they may look expensive at first glance due to the high P/E ratio (well, high for us bottom feeders) but I think the key is that they are earning a lot of free cash; their free cash to net income was 130% last year and has been consistently over net income in recent years.  So from that point of view, the raw P/E ratio may not be the best way to look at this.

Back to Teledyne
OK, so let's get back to TDY.  It's still listed and it has been doing quite well.   As Buffett would say, here lookit: 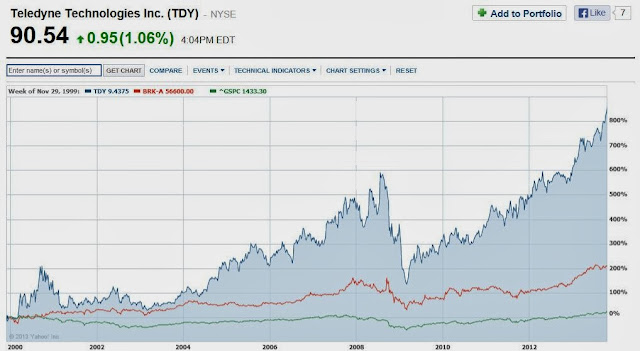 Again, like the other chart, the red line is Berkshire Hathaway (I'm not picking on Buffett; he's just a very good benchmark!), and the green line is the S&P 500 index.  This looks pretty good too, even though it would have been quite a rough ride over the years.  But you know, we are not supposed to care about price volatility as long as intrinsic value keeps going up.  I haven't followed TDY over the years so I don't have a strong sense of what these years were like for them.

That's a 18.1%/year return for the stock compared to +1.6%/year for the S&P 500 index (excluding dividends).  That's not bad either, and may be worthy of outsider status.  14 years might be a little short compared to the others (but General Dynamics was 17 years, so).

August 2013 Investor Presentation
TDY too has a great investor relations website so let's snip some stuff from there:

Similar to Transdigm, they focus on highly engineered products.  From looking at the annual reports over the years, it seems like they started focusing more on transitioning over time. 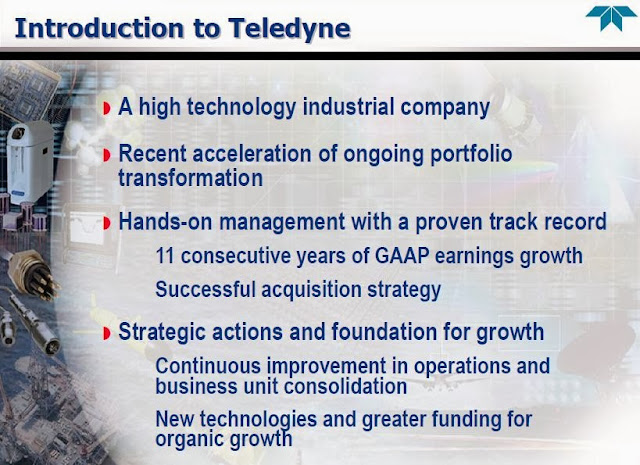 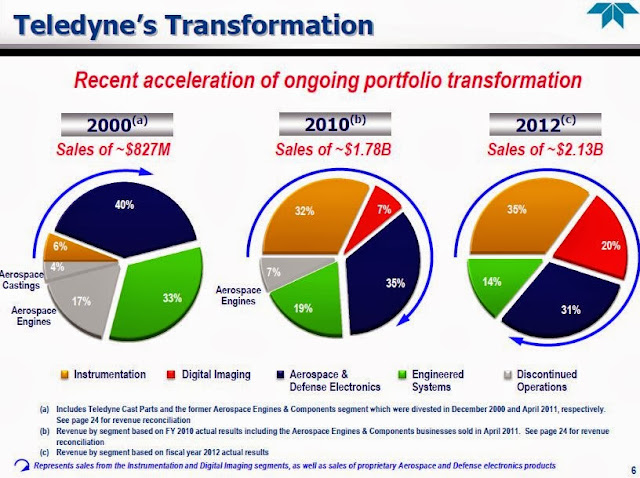 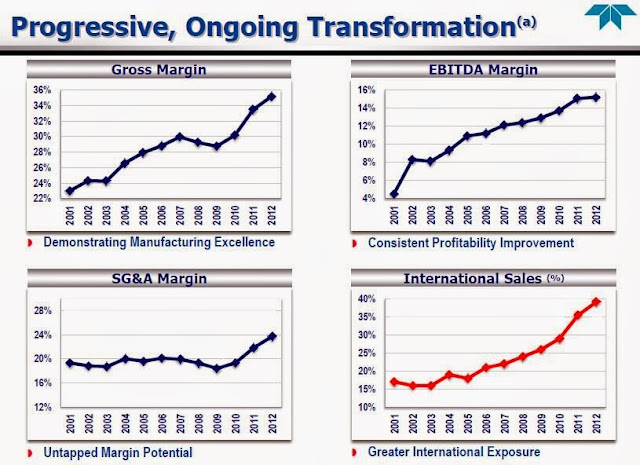 This high SGA margin is an area they see as potential for improvement (and margin expansion). 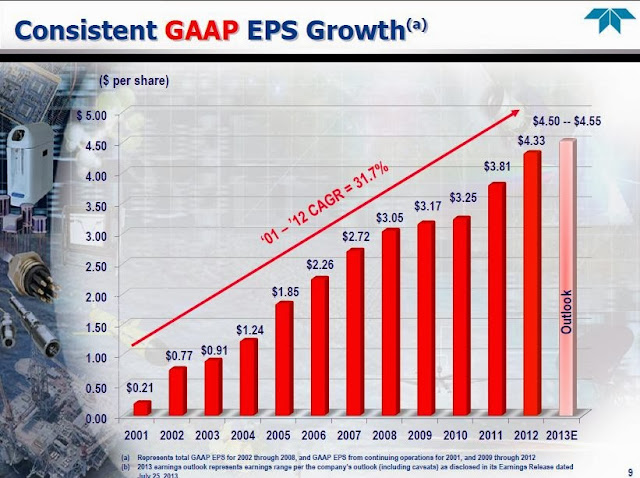 This EPS growth looks pretty good.  But some will argue that the $0.21 might be abnormally low so the CAGR over time is front-weighted.  So let's just look at different time periods:

EPS growth rates from the above graph were:

So not so bad even starting in 2003.  Of course, we have to keep in mind that the five year growth rate includes the great recession. 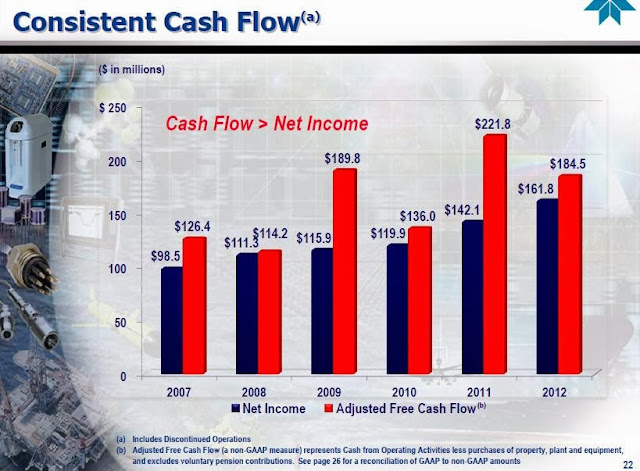 Again, if we focus just on P/E ratio, we might miss the more important free cash flow; raw P/E might make this look more expensive than it is.  A lot of opportunities arise when people are misled by 'headline' metrics.  Maybe this is one of those situations. 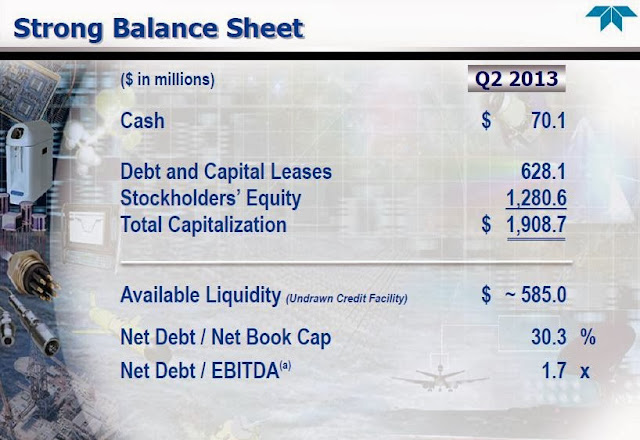 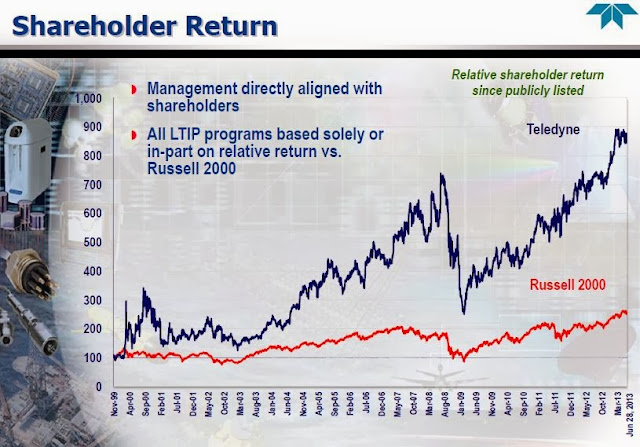 Anyway, TDY is certainly worth a look.  I haven't spent much time on this; this is just one of those tangents that came from reading that book. That's what's so great about reading!  And then I posted about it and I got other leads from the comments section so thanks to those who do post comments.

Oh, and one more quick thing.  Who is TDY run by?

Who is Dr. Mehrabian?
He is 71 years old as of the most recent proxy, so that's an issue; who knows how long he intends to stay on the job here (and what the succession plans are).  I haven't listened to any conference calls or anything like that so there is still a lot I don't know.

But anyway, here's a snip from the proxy:

As I said before, he wrote a section at the end of the Teledyne book; a chapter called "A Teledyne Renaissance".

Dr. George A. Roberts (President of Teledyne during the Singleton era and author of the Teledyne book) in the book says of Mehrabian (page 252; From Merger to Spin-off):

Among those included as new members of the combined companies was a highly competent individual well known to both Dick Simmons and myself, Dr. Robert Mehrabian, who now heads Teledyne Technologies, Inc.  He had been president of Carnegie Mellon University for seven years, and also served there as a professor of materials sciences and engineering.  He was an internationally known authority on advanced technologies, and after joining the board in 1996 he retired from the presidency of Carnegie in June 1997.  Alleghany Teledyne Chairman Richard Simmons offered him the position of senior vice president and segment executive to run the new company's Aerospace and Electronics segment.  A year later he was placed in charge of all Alleghany Teledyne companies other than the specialty metals operations...


So anyway, there you have it.  There is TDY doing wonderfully long after the passing of Henry Singleton.

This is not a recommendation to go out and buy TDY, of course.  I haven't done any serious work on this yet.  But yes, it's certainly one that belongs on a watch list.