What To Do In This Market

After such a huge rally since the great recession, and now after a huge runup this year people are wondering what to do with their money.  Many are afraid that the markets will tank as they are getting bubbly and there will eventually be tapering that will most certainly be devastating to the markets.

But then people like Buffett just keep buying stocks and telling people stocks are the place to be, even recently.  When people ask him about stock prices, he always says that if stock prices go down it would make him happy as he will find more things to buy.  Munger also says that bad times and low stock prices are good; that's how businesses grow.  That's how the rich get richer; they just take advantage of dislocations to expand.

I was thinking about all of this stuff and it occured to me that this ties back into the outsider CEO / owner-operated business theme.

First, let's just look at the obvious one.

Berkshire Hathaway in the 1970s
I think what many fear is a 1970s like situation; interest rates and inflation flying out of control, stocks going down a lot or staying flat for a long time, stagflation etc.

So let's see how Buffett did during that horrible period.  When I mention Buffett to people, even people on Wall Street, many say that Buffett is just a product of a bull market (if it's that simple, then how come there aren't more Buffetts?). 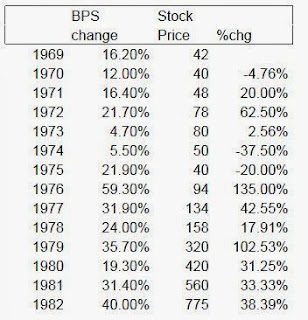 So from 1969 through 1982, BPS grew +26%/year and the stock price appreciated +25%/year.  And this is between 1969-1982.  There was no bull market here.  There was no boom.  From 1972 - 1982, both BPS and stock price rose +26%/year.   Buffett (as far as I know) didn't own gold, gold stocks, crude oil futures, oil stocks, commodity funds, real estate, timber, alternative investments or anything like that.   A lot of this value was created because of the flat period and low prices.  He was able to pick up stocks and businesses on the cheap and he didn't need a bull market for those values to be realized.

I posted here many times how well the superinvestors of Graham and Doddsville did during this time period too despite a flat market.

OK.  So we can't identify a Warren Buffett or superinvestor ahead of time you say.  Of course if we invested with Buffett early on, it wouldn't have mattered what the market did.

So now let's look at one of the outsider CEOs.

Teledyne in the 1970s
So check this out.  We know that Henry Singleton was a great capital allocator.  But he was not a stock market 'superinvestor'.  He bought and sold businesses, for the most part (they did get into insurance at one point too).

Look at this table closely.  I input some of the data at the back of the book, Distant Force. 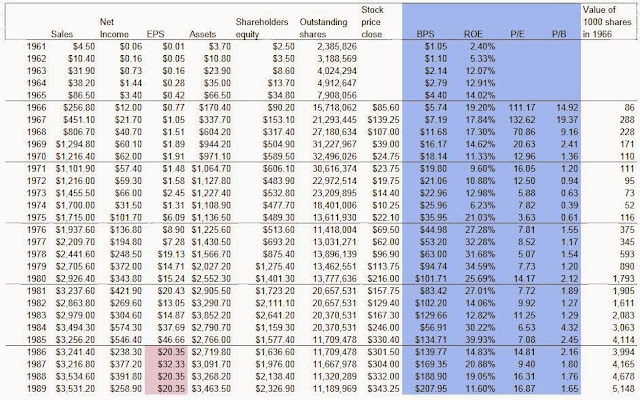 ﻿
This is kind of tricky to look at due to all the transactions, splits, stock dividends and things like that.  The important figure is the far right column which shows the value of 1,000 shares of Teledyne owned in 1966 (in thousands of dollars).

All of the raw data is from the back of the book, and the blue area are figures I calculated using the raw data.  I just put it there for perspective so it's not perfectly accurate.  For example, book value per share is simply shareholders equity divided by shares outstanding, ROE is net income divided by average shareholders equity (average of beginning and ending equity).  There isn't enough information to make necessary adjustments, so the blue area is for reference only.

The purple/pink figures for the 1986-1989 EPS is calculated using the net income and shares outstanding as the EPS figures in the book look wrong.  In the book, it shows EPS of $4.07, $6.45, $6.81 and $4.66 for that period which doesn't make sense if the net income and shares outstanding are correct (and those look more in line with the rest of the data).

Between 1972 and 1982, Teledyne stock returned +33%/year.   Again, this was sort of a peak-to-low in the stock market; no bull market or strong economy to help.

Buffett often mentions Washington Post as an example of how share repurchases can create value.  His ownership stake has increased over the years simply from share repurchases (he owns the same number of shares but share count decreases with repurchases).

Low Prices Are Good
From these examples, you can see why Buffett is not concered at all with lower prices.  If you have good, honest, competent management, then lower prices is fine as they will focus on value adding acquisitions or share repurchases.  The above shows that you don't need a roaring bull market and booming economy to get good returns.  In fact, the above two examples show people who did better in a flat, horrible economy than most did in the bull market starting in 1982.

This is why I think it's so important to focus on what management is doing rather than on what's going on in the world.  A good manager will do what makes sense in whatever environment.  The question of management is so much more important than what asset class might or might not do better in the future, how much cash to set aside or anything like that.

The natural instinct, though, from looking at the above tables is to try to find a way to avoid sitting through a 50% decline in the stock price (even Berkshire Hathaway went down 50% in the 1970s and in the recent financial crisis too (and in the late 1990s)).  It seems like most people tend to focus on how to avoid the 50% drop rather than the long term value creation of good businesses (which makes a temporary 50% drop in the stock price entirely moot).

Depressed Valuations for an Extended Period
The other thing people worry about is that purchases of businesses made at reasonable prices may trade at depressed levels for a very long time.  What if you pay 20x P/E for a business and it trades at 7x P/E for an extended period of time?  If it trades cheap for a long time and the business is sound and throwing off tons of free cash (again, this is why free cash flow is so important!), then it's not going to matter; value will be increased.

The Teledyne example is a perfect one.  Teledyne would not have done so many tenders if the stock wasn't so cheap.

So for the Teledyne shareholder to have done well, it didn't even have to get back up to 10, 15 or 20x P/E.  Going from a reasonable (or high) valuation to a cheap valuation still allowed the shareholder to do well.  And again, that's due to the tenders done throughout the 'cheap' period.

And importantly, a Teledyne investor didn't have to wait until the stock price got cheap in order to do well in the stock.  Of course they would have done better buying at the low, but how many people actually do that?  In many cases people wait for a good opportunity to buy and it never comes, or it comes at a far higher price.

Conclusion
With the market having done so well recently a lot of people seem to be looking for other places to put their money.  They wonder how much in stocks they should own, whether they should get into real estate, gold or other hard assets.  Institutional money is running to alternative assets.

I think the more interesting question is not so much whether or not to own stocks (versus other assets), but which stocks to own.   I think history shows that choosing which stocks to own is more important for returns than choosing which asset class to own, which sort of goes in and out of fashion.  If you own commodities, gold or real estate, they will go up and down with the trends/fashion of the moment (actually, real estate can be managed actively and intelligently).

I know there are academic reports contradicting this, but my guess is that those studies focus on large institutions and their equity portfolios tend to mimic the major indices so there is probably very little difference in returns based on stock selection.

But if you own a good business such as those run by an outsider-type CEO, the stock price may go up and down in bull and bear markets according to the mood of Mr. Market, but the intrinsic value of the business will keep going up.  And the markets will eventually reflect that increasing value over time.  Even if Mr. Market refuses to acknowledge the value, a good CEO can use that irrationality to enhance value (through aggressive buybacks).

Anyway, this is what Buffett keeps saying and value investors understand this.  But I just wanted to use a specific example to illustrate exactly what he means; to see the mechanics of how this actually happens.  Of course, Teledyne is an extremely successful example so we can't expect to find something that will do as good as the old Teledyne, but I think many companies operating under similar principles can do much better than the market (and certainly better than 'hard' assets and most other investment 'alternatives').

So what do you do in this market?  I guess the conclusion is to keep doing what we should always be doing.  Looking for businesses like the above, and then just hanging on.  Don't do anything different.  Ignore books and people who give advice on what to do in flat markets, inflationary markets, depressions, how to prepare for this or that and things like that.