OK, now that's a silly idea.  Coke (KO) is one of the most respected companies and known to be very well managed.   It is an excellent company for sure.

One great thing about running a blog is that I can just think out loud here and sometimes someone pulls on a thread and gets me thinking about other things (or corrects my mistakes).

After posting about a possible (or impossible) BUD/KO merger, someone commented that the operating margins can't be compared because BUD and KO operate under different models.  KO lets the bottlers do the heavy lifting and KO only makes the syrup.  This is increasingly less so due to the non-carbonated drinks they sell.  They also took over the bottling operations in the U.S.  But OK, that only accounts for 20% of global volume so it is still mostly a syrup selling operation; a very high margin and lucrative business.

But as I pointed out in the comment section, that makes the BUD/KO merger argument even stronger.  If KO has the better operating model, then how come BUD has an operating margin of 32.5% versus KO's 21.8%?    That makes no sense at all.

And as I went about my usual daily routines, I kept thinking about it and couldn't get over the fact that KO has been run so long by insiders, on how insiders tend to respect 'sacred cows' and respect tradition (in other words, it's been a tradition for 100 years to do it that way, so let's keep doing it that way).

Also, if you went up in the organization, that means you have a lot of subordinates that you helped promote over the years.  It's really hard to give a hard-working underling a department to run and then later take it away saying that we don't need it anymore.  The more likely scenario is, well, it doesn't cost us so much and we can still make our numbers so let's keep that department going.   It's probably also hard to give people nice offices over many years and then suddenly say, hey, no more offices!  We are all going to work in cubicles now.

I keep going back to that comment by the new Sony CEO that said they will never stop producing televisions because the engineers in that division are very proud of their work.  Is it any wonder what is happening there?  I've seen a lot of that when I worked in a big company too.

At KO, it's probably not so much product lines, but activities.  They probably spend a ton of money on all sorts of events with questionable returns.  I don't know (but I'm sure it will take a couple of days for 3G-type people to figure out).


It's Return on Capital, Stupid.  Not Margins!
And as I was thinking about this stuff all of the sudden I slapped my forehead and said to myself, geez, it's not the margins!  Well, margins do matter and the higher the better.  But the KO model was meant to be an asset-light model; let the bottlers build the bottling factories.  Let them do the capital intensive part and we'll just keep producing Super Bowl commercials.

So when this occurred to me, I rushed back to my desk to look at the return on capital figures for the relevant companies.

Operating Margins
So first of all, here are the operating margins for the businesses we are talking about.  Oh, and I also added Dr. Pepper Snapple Group (DPS) because they are in a similar business to KO but they are integrated, meaning they bottle their own drinks instead of relying on bottlers.   DPS is way smaller than KO so may not be a fair comp, but still, it would be an interesting benchmark.  Actually, the advantage should be to KO; size/scale benefit etc.

Here are the operating margins:

So here it looks like KO is doing well against DPS and PEP.  But PEP is attached to a snack business which might have slightly different economics.  But the margin is a lot lower than BUD, who bottle and deliver their own drinks.

Return on Capital
But as I said, it may be the capital that matters, so let's look at some return on capital figures.  For capital, I will use the total of long-term debt and total equity.  I will look at operating earnings against this and call that return on capital.  Also, I won't use average equity or anything like that; I just use whatever is on the balance sheet at the end of the year.

So this is not text-book correct, but should give sort of an indication.

But here, the first thing you notice already is that KO's return on capital is better than DPS and PEP, but not that much better.  I thought it would have been a much bigger gap given the advantageous  business model.

And then you say, "aha!", look how awful BUD is!  But then we have to remember that BUD was created by a giant merger (and more mergers in the past) so there is a lot of goodwill on the balance sheet.

So I decided to take a look at return on tangible capital.  Here, I will only deduct goodwill, and not other intangible assets as goodwill is the pure premium paid on acquisitions, and intangibles were identifiable (but not tangible) assets that were put on the balance sheet.  I don't want to get into if the intangible valuation is fair or not.  Plus, if I deduct those intangibles, DPS capital would be negative so would destroy the elegance of my argument so let's just keep that in.

Return on Tangible Capital
So deducting goodwill from the above definition of total capital, the return on tangible capital (ROTC) becomes:

I was a little surprised by this result too.  KO's return on capital is good, but look at DPS and BUD.  And KO's is not much higher than PEP's ROTC given it's supposed asset-lightness.  My image is that the soda business is much more lucrative than the snack business (growth problem aside), so it was surprising to me that KO and PEP were so close here.

Greenblatt Return on Capital
And for fun, as one more layer of return on capital comparisons, I decided to use Greenblatt's Magic Formula return on capital as it does exclude all intangibles.  I will again use operating earnings on top and for the denominator I will use net current assets plus net PPE.  Let's call that NCAPPE.

Using that I get:

Again, this was surprising.  Both DPS and BUD beat KO on this measure.  So what happened to the asset-lightness?    Is KO pissing away the benefit of the operating model with unnecessary spending?

Here is a table that summarizes the above stuff: 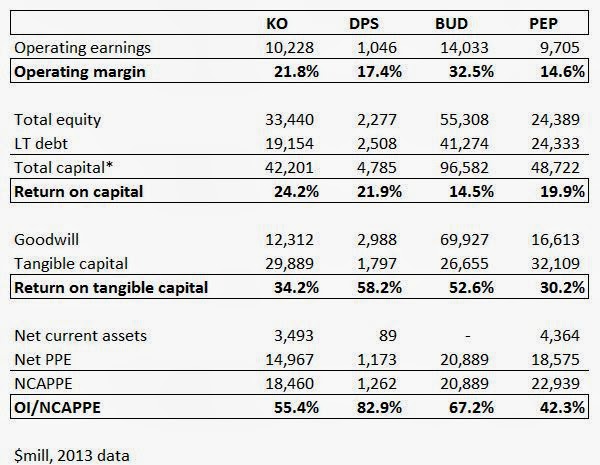 Again, I deducted the equity method holdings for KO from the capital.  Net current assets was negative for BUD, so that's why it's zero there.

Conclusion
I don't think anyone can look at KO and think it's poorly managed.  And there is a question as to whether everything has to be super-optimized for super-efficient, super-returns-on-capital.

But it was interesting to go through this exercise and realize that KO is not that way out in terms of performance as I thought it was.  And again, it shows partly how incredible the 3G guys are.

If Heinz, which was considered pretty well-run (people wondered what more 3G can do after years of restructuring there) can improve so much and they can get so much value out of it, imagine what they can do at KO.  From these figures, you can see that there is a lot of room for improvement.

So while Buffett has denied Berkshire Hathaway and 3G taking KO private, that doesn't mean that Buffett doesn't want some more value extracted from KO.

And KO is so big they will need some sort of vehicle to do that with, and what better vehicle is there than BUD?

Although it is more likely that BUD acquires SABMiller, PEP and even DPS (too small?), a deal with KO would be very interesting.

Some of the pieces of the puzzle are lined up already.


So there are a lot of things when you think about it that makes a lot of sense here.  And yes, there are things that may be difficult.  Can you imagine the uproar of a foreign firm buying Coke?  The size of the deal alone makes it look impossible.

But again, what's the fun if we don't dream big?!