Speaking of nanoo, nanoo, how about a nano-cap?

There is some interest in small cap stocks as they tend to outperform over time, but small caps are now looking really expensive.  So I was kind of surprised to take a look at this thing and notice that it's not that expensive.

Teton Advisors (TETAA) is a 2009 spinoff from Gamco (and spinoffs outperform over time so check that box! You can also check the owner-operator box too and then maybe the tiny-cap/below-the- radar box too).  They have been doing really well since the spin, but that's because they were spun off at the bottom of the bear market.  I don't think what they did from 2009 through 2013 can be considered 'normal'.

Tiny Cap with No Float!
But first, let's get this out of the way.  This is a highly illiquid stock on the pink sheets so doesn't even have decent filings (well, OK, not so bad.  But the proxy is a little thin).  Plus you can forget about any shareholder rights as Gabelli basically controls this entity and it is still intertwined with Gamco.  How this gets untangled over time is something I have no clue about.  But I do like and respect Mario Gabelli and think he wouldn't do anything to hurt minority shareholders.  He is sometimes criticized for his 10% pretax profit bonus he gets at GBL but that sort of thing doesn't bother me at all either.

According to the last 10-K they filed in 2009, Gabelli owned 600,000 shares and the CEO Nicholas Galluccio owned 260,000.    Westwood Management owned 200,000 shares but TETAA has since repurchased those shares.  Assuming there has been no big change in ownership since then, Gabelli would currently own 55% and Galluccio owns 26%.    Between them they own 81% of TETAA.   So float would be less than $10 million.   So let's not all go out and buy some at once!

Historical Performance
So let's look at how TETAA has done in the recent past.  Below are some figures I pulled out of the financial reports.  Some of the 2013 AUM figures are rounded to the nearest $100 million because reference to the AUM in the earnings release and 10-Q only gave a figure like $1.8 billion instead of a more precise number.  It may be posted somewhere else, but I just grabbed what was convenient for me.  And besides, it shouldn't make much of a difference. 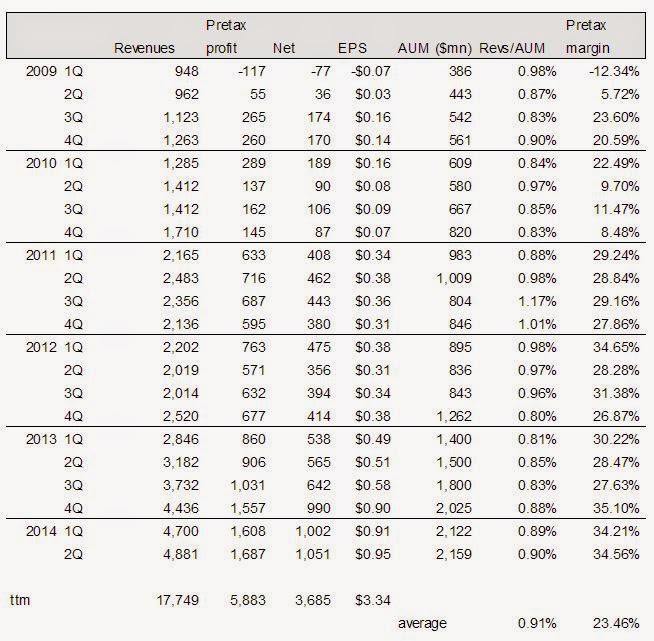 As you can see, AUM has been growing nicely and they are making decent money with pretax margins up into the 30's.  In the last twelve months, they earned $3.34/share and pretax earnings of $5,883 million or $5.35/share.    At the current $49/share, that's 14.7x p/e and 9.2x pretax earnings.  I remember money management companies being valued at 10x pretax earnings in a post a while back, and TETAA is trading at below that.  At the risk of annualizing and capitalizing peak earnings, if you annualized the $0.95 2Q2014 EPS, you get $3.80/share in run-rate EPS; TETAA is trading at 12.9x that (or 8.0x pretax earnings).

Given this growth (and potential), it does look cheap.

Of course, the counterargument is that we are at the top of the stock market so equity managers should trade cheap, just as old, industrial cyclicals trade at a low p/e at the top of the economic cycle.  This is true to some extent, but if you look through-the-cycle, I don't think that is necessarily the case for asset managers (unless their AUM is bloated and unsustainably high due to a bubble; AUM here at $2 billion doesn't seem like that).

But How Are Their Funds?!
The important thing for me, though, is the funds.  Do they perform?  If they don't outperform, they can still be great businesses (as mutual fund/retail assets tend to be sticky), but for me, I would get more excited about an asset manager if I think they have a reason to exist.  And the only reason they should exist is if they can outperform.

Unfortunately, most of their funds aren't that interesting at all.  They started a new mid-cap fund, but it is too new to evaluate.

But the one big fund is actually really good.

Teton Westwood Mighty Mites Fund
This fund name makes me itchy, but let's take a look at it.   I pasted the table from their annual report since it includes a benchmark (and their semi-annual report doesn't).


COMPARISON OF CHANGE IN VALUE OF A $10,000 INVESTMENT IN
THE MIGHTY MITES FUND CLASS AAA, THE RUSSELL 2000 INDEX,
AND THE RUSSELL MICROCAP™ INDEX (Unaudited)

*Past performance is not predictive of future results. The performance tables and graph do not reflect the deduction of taxes that a shareholder would pay on fund distributions or the redemption of fund shares.
**The Russell Microcap™ Index inception date is June 30, 2000 and the value of the Index prior to July 1, 2000 is that of the Mighty Mites Fund (Class AAA).

It does look pretty impressive, no?

The Teton website lists Mario Gabelli as the lead portfolio manager for this fund.   Here's a cut and paste from the website:

So that would sort of be a problem if Gabelli's contribution is not perpetual.  Gabelli and some other employees work for both TETAA and GBL, and this will not last forever.  I think there is an agreement for two more years of GBL employees working for both GBL and TETAA.  After that, who knows what will happen.

The question obviously is how much does Gabelli do for the Mighty Mite fund?  There is a team of co-managers, but can they perform as well without Super Mario?  Or will he stick around long enough for others to be able to step in as lead manager?  Or is he not doing much these days anyway?  I have no idea.

Sonkin/Hummingbird
The other interesting thing about TETAA is that Paul Sonkin of Hummingbird value has joined the company.  Sonkin is the co-author of the highly regarded book, Value Investing: From Graham to Buffett and Beyond.  His presentation(s) from value investing conferences were very interesting.

I wonder what happened to Hummingbird Value fund?  Why would he join another asset manager?  Maybe his business didn't scale well?  I don't know.  I do remember him digging deep and alone into below $15 million market caps.  Maybe that sort of business model was unsustainable?

But whatever the reason, it looks like Sonkin will be looking at stubs, spin-offs and other special situations.  He is currently listed as a co-manager of the Itchy Bites fund  Mighty Mites fund, but there might be a special situations fund offering in the future.

Conclusion
This is a tiny idea with only $10 million (or less) in float so not an idea for most.   And there is a lot I don't know.  If you buy TETAA, you will be a super-minority so you will just be along for the ride.  And whatever deal happens between TETAA and GBL (and Gabelli personally), too bad.  There is nothing you can do about it.

But I do have faith in the character of Gabelli and his team.  I don't think they would do anything funky.

This is a tiny spinoff with $50 million in market cap, so just a few ideas can really create value here.  Compared to running an asset management conglomerate with $100 billion in assets, you don't need a whole lot of ideas to work to get the market cap up.  And the fact that the highly regarded (as far as I know) Paul Sonkin of Hummingbird has joined is a very interesting development.  It's almost like getting in on the ground floor of whatever they do going forward.

Some would argue for a liquidity discount, but sometimes maybe there should be an easy-to-move-the-needle premium.

Oh, and at the very least, looking at the fund holdings (Mighty Mites) might be a great place to find some ideas.

Email ThisBlogThis!Share to TwitterShare to FacebookShare to Pinterest
Labels: TETAA