So, it looks like Lou Simpson added a bunch of Charles Schwab (SCHW) to his portfolio, making it the top holding as of the end of June; he increased his position almost 50%.

I am not stalking Simpson in particular, but I just happened to notice this and SCHW is a name that I am sort of familiar with and have been a fan of for a long time.  Putting those two together, I figured it's worth a post.  We all know who Lou Simpson is, but in case you don't, here is a look at his past performance during his time at Berkshire Hathaway with some quotes by Buffett about him:  Brookfield Asset Management post

I'm not going to go into too much detail about the business as I think most of us are familiar with SCHW; a discount broker that grew into a more full service financial company.

Quick Comment on Markets
I have no idea what's going on in the markets, and have no idea what will happen going forward.  But I had a conversation with someone very concerned.  My answer was that if it's going to be a major problem if the market keeps going down, you simply own too much stocks.  But this is something you have to think about all the time, not when the market is down 1000 points. That is the worst time to think about what to do (unless you want to buy!).  Why do people think about this only when the market is down?  The market goes down and the first instinct always seems to be, "Should I sell?!".

If a declining market is a problem for you, don't own stocks.  Or only own enough so that this sort of volatility won't be a problem.

As for what will happen going forward, I still stick to my view that the market is not that overvalued given the interest rate environment, and we have plenty of cushion even if long term rates rise. They can go to 6% and we'd still be in a zone of reasonableness in terms of valuation.

As for China, yes, the U.S. market is tanking on news out of China, but I still think the world need not go down with China.  I don't worry too much in that respect.

Oh, and by the way, for those interested in stock screens of the Superinvestors' stockholdings (as defined and tracked by Dataroma) I have updated the screens Friday and last night.  I automated the process completely so I just need to type a single line in the command line for the spreadsheets to be updated (I initially had it set up to update an Excel spreadsheet which I cut and paste later to a Google spreadsheet since it was a hassle to directly update a Google sheet from a program; I got over that hump...) so I can update it every time the market has big moves.

I do intend to add spreadsheets that show year-to-date winners and losers of those stocks too.  Stay tuned for that. (My recent hobby is programming so I did all of this for fun and thought it would make a nice addition to the blog so just put it there...)

Anyway, end of digression and back to SCHW:

But there seems to be a lot of integrity there.  There isn't much I can say other than that I've been following and reading about SCHW for years, and they tend to be very conservative and client focused.  I've never had a bad experience, and never read anything I didn't like about them.

One thing, though, is that a lot of this is due to my faith in and respect for Charles Schwab, the founder.  He is 77 years old now.  Who knows what will happen post-Schwab?   The business itself doesn't depend on his talents on a day-to-day basis so there is a good chance that they can continue to do well as long as they keep their culture.

The only reason I've never owned the stock is that it has always been a growth stock.  The P/E has always been far above 20x.  And there has been growth to support that, except in the past few years.  But we'll get to that in a second.

When an investor you highly respect makes it the top holding in his portfolio, even larger than Berkshire Hathaway, a company he knows better than anyone in the business (as an investor,  former employee and Buffett friend), you have to pay attention.


Interest Rate Normalization Bet
So let's get to the gist of the idea here.  In short, this is an interest rate normalization play.  This doesn't sound right because investors like Lou Simpson don't make macro plays or 'bets'.  But in another sense, value investors make  "earnings normalization" bets all the time.  When a company is going through hard times, we look at what the business can earn in a more normalized environment.  We slap a multiple on it and then buy the stock if it is meaningfully lower than that.

In that sense, this is sort of the same thing so not really a macro play.  Macro plays are often time-dependent.  People make bets about this or that, and when it doesn't happen within a year or two, they are in trouble.  But in the value investing world, playing for normalization is not as time-dependent.  We often don't know when something will happen, but only need to be confident that it will some day.  And if the underlying business can continue to grow and pay dividends in the meantime, that's great.  This is not the same as making a macro bet, like shorting bonds or whatever.


Clip from 2014 Annual Report
SCHW has been talking about this for a few years now, but I never really paid too much attention to it as I was in the camp that the U.S. interest rate environment might follow Japan's.   Well, yes, I do own JPM and they too are a great interest normalization bet, but JPM was trading very cheaply while earning 15% return on tangible equity even with rates very low.  SCHW is not really trading cheap in that sense.

But anyway, here is a clip from the 2014 annual report that is the key to this whole idea: 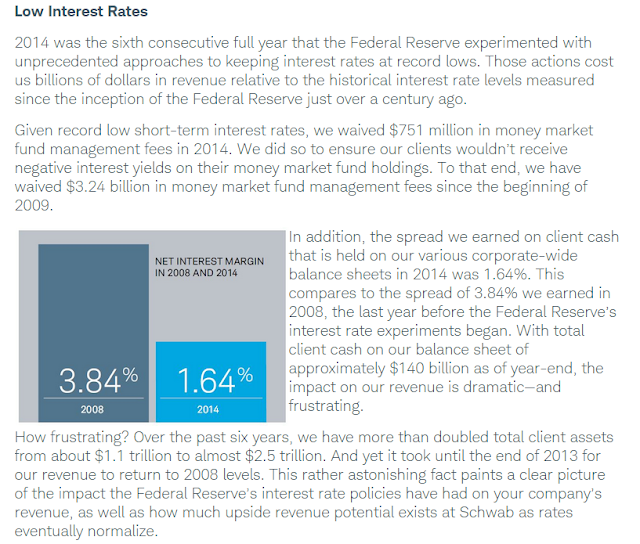 But notice the above; due to low interest rates, they waved $751 million in money market fund management fees.  Since they are incurring the expenses to manage the funds, getting that back should go right back into pretax profits.  Using a 40% tax rate and 1.3 billion shares outstanding, that amounts to $0.35/share in EPS.  Adding that to the $0.95 EPS in 2014, that would get us a normalized EPS of $1.30/share bringing the P/E down to around 23x.

The question, of course, is if interest rates will normalize.  The 'when' is not so important here, I don't think, because the underlying business is growing nicely so if normalization takes place later than people think, it will just have a bigger impact on EPS by then.

I thought about making this post last week, before the market got messy.  So maybe interest rate normalization is not at the top of investors' minds right now.  Maybe the scenario is pushed back a little.  But if you can wait, and you think rates will eventually normalize to some extent, this is certainly an interesting idea.


More Detail on Rate Normalization
This is a slide from their summer business review presentation.  They take a closer look at how interest rates will impact revenues. 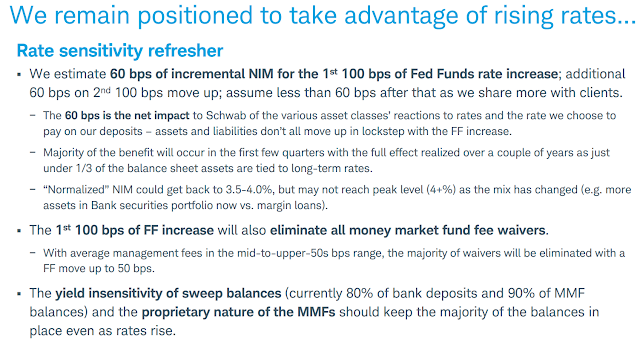 If you look over the ten years through 2014, EPS at SCHW actually grew around +14%/year, and going back twenty years to 1994, EPS grew +13.5%/year.   And it is still growing.  And keep in mind that these growth rates are with an unnaturally depressed endpoint (sub-normal NIM in 2014).

Look at the slide below and you will see that the business is growing since the 2007 peak despite an unchanged EPS.

Client assets are up nicely even compared to the 2007 high. 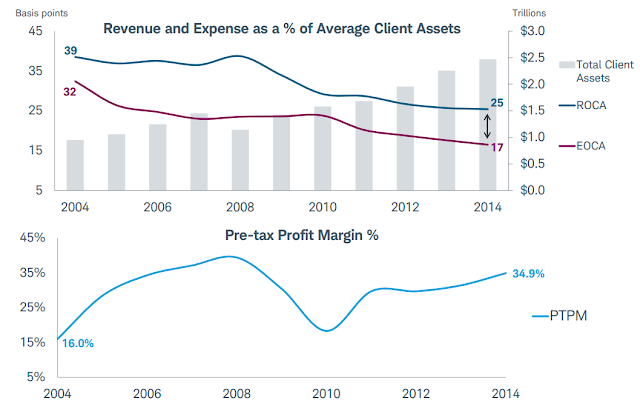 Here is one of the drivers of SCHW's growth over the past few years. This trend seems to be continuing so there is plenty of runway for growth. 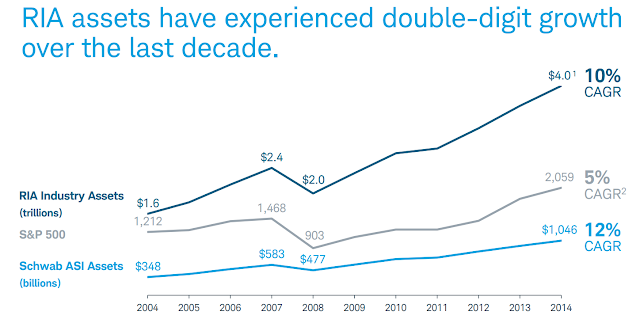 This is a nice chart that shows a trend that I believe will continue: 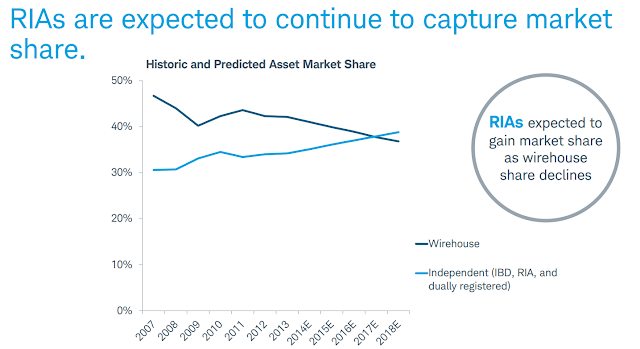 Conclusion
So, this is kind of an interesting idea.  There are a lot of interest rate normalization plays (like, all financials?).  But this one is a little different in that it has a lot of growth potential, unlike, say, the larger banks.  Plus, I have always liked the company, the management (well, at least the Chairman Charles Schwab) etc.  Recent events make interest rate normalization seem less likely to happen soon, but if you believe that it will eventually happen, then this is an interesting idea with a lot of potential.   Paying a normalized 11x P/E (or 14x P/E using a 3.00% NIM) for a high growth business with plenty of room to grow seems pretty interesting.