OK, so there was some feedback from my post about the scary chart.  A bunch of other scary charts were offered up along with a presentation by the great Stanley Druckenmiller.  I am a huge fan of Druckenmiller; he is no doubt one of the greatest traders of all time.

When I started out in the business, the must reads were, of course, Reminiscences of a Stock Operator and these books: 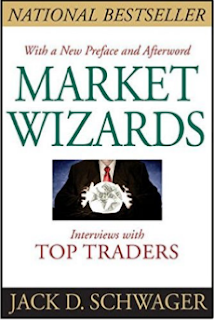 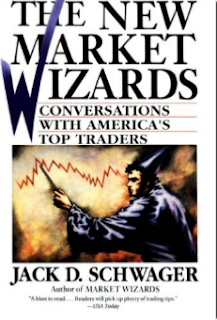 I started out in the trading side of the business more than the investment side, as you can tell from these books.  I wouldn't consider any of these books essential reading for the typical value investor, but they are great books to learn how great traders think and make money.  These are true classics from the all-time greats, even though I may not be a big fan of some of folks in them.

Speaking of great interview collections, the above two may not be required reading for value investors, but there are two that I think are must reads.  There have been a lot of books like these in the recent past too, and many of them are great, but these two are true classics.  Most of you have read these, but I think some of the younger generation may not have read these; they used to be available at book stores, but I haven't seen these recently.

I've been meaning to reread all of these for a while.  I should do it now that I've mentioned them.  I feel like the Book-lyn Investor today.

Back to Scary Charts
Anyway, OK, let's look at some of this scary stuff.  Druckenmiller's presentation is really good and it is true that returns going forward are probably not going to be as great as it was in the past.  The wind at our back of constantly decreasing interest rates and increasing valuations along with a strong economy largely driven by increasing leverage in the system may become headwinds going forward.  We can't expect much of a valuation boost from lower interest rates, nor a stronger-than-deserved economy based on increasing leverage (bring forward demand).

Here are the charts that tell this story: 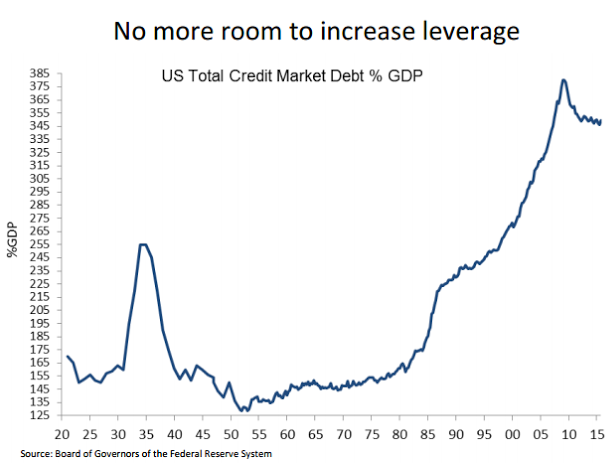 These charts are truly scary.

But here's the thing. The exact same argument has been made since at least 1990.  Check out the same charts as above only cut off in the early 1990's.  The same exact argument was made at the time.  In fact, during the 1990 bear market, it was claimed that we can't recover for these reasons.

Look at the chart below.  It was claimed that the stock market bull was driven largely by the bond bull market; lower rates => higher valuation.  Interest rates were back to levels last seen in the 1960's.  That was a pretty dramatic chart back then, and the bond bull market of the 1980's really looked complete no matter how you looked at it. 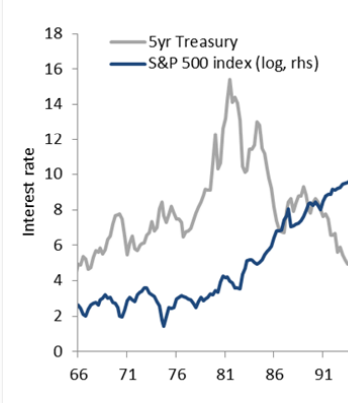 It was also claimed that the entire bull market and strong economy was fake and was driven largely by increasing debt.

The chart below looked really scary in the late 1980's and early 1990's.  It was commonly believed that the bull market in interest rates was near an end and that the debt levels in this country was at a limit.  The economy and entire system had only one way to go: down.

And yet, the S&P 500 has increased seven-fold since 1992 (total return), for a 9%+ annualized return.  If you said back then that the market would return 9%/year over the next 23 years, they would've thought you were nuts.  Like, how can that happen? 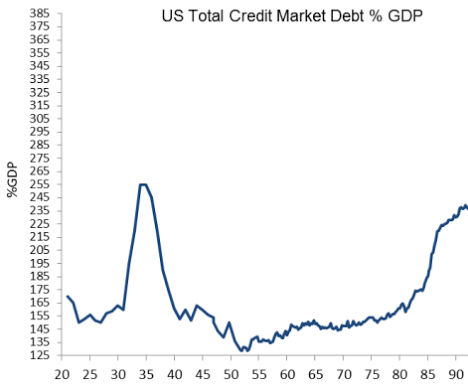 Now go back and look at the first debt chart. I have no idea how and why the debt was able to rise so much since 1990 with little effect.  I have some theories and ideas, but maybe that's for another post.  Can we keep going up like that?  Probably not.

With interest rates, I have no idea where they would go.  If I was sure rates would go back to 6-8% within a year, then I have some great trade ideas.  But I have no idea, really. I really believe that it is just as likely that 10-year rates will be 0.5% as it will be 3.0%.

Conclusion
This is not to say there won't be nasty bear markets ahead.  There will be.  The folks calling for a big bear market / crash are much smarter and richer than I am.  So I would not ignore those views.

On the other hand, we have to remember that these calls have been made in the past and sometimes the most obvious, inevitable conclusions don't pan out as expected. This is not to say that these scenarios will never pan out. I'm just pointing out that it's really hard for even the smartest people to figure out when it will happen.

Japan, for example, looked arithmetically at an end-point, ready for a complete implosion.  And yet, that day hasn't come yet.  We might as well call the JGB market the widow-maker.  Seriously.

This is not to say that just because something hasn't happened yet, that it won't ever happen.  Overweight, heavy-drinking smokers can tell you they are fine, and that they've been fine for many years.  Still, I would not bet on their long term health.  But I wouldn't really bet on their imminent death either.

This is a sort of post I don't like to make, especially with the market making new highs, VIX and put/call ratios at lows etc. It makes me feel like the market will crash right after I hit the "publish" button.

Anyway, again, as with my other posts on the topic, I am not predicting a continuing bull market or an imminent bear market or anything like that.

And there is a lot I don't understand.  Where and when will the rubber band of debt snap, especially in Japan?  Debt levels can't keep going up forever.  If rates do go up, a lot of this debt won't be serviceable.  The math there is terrible.  But when does this become an issue?  I have no idea.


SuperInvestor Portfolios
By the way, for new people, I have a couple of pages on the blog where I post screen/sorts of superinvestor portfolios.  The portfolio holdings themselves come from Dataroma.  Every week, I sort the holdings by year-to-date returns and also do a valuation sort.

The year-to-date returns have been working fine, but the fundamentals sort kind of broke because Yahoo Finance changed their website; the old program stopped working.

I am actually working on that as I type; the small portfolio has been updated successfully, but the large portfolio script keeps crashing.  It takes a lot of time now since the Yahoo Finance statistics page has Javascript enabled content, meaning I can't just grab data off the website easily like before.  Now I have to use a browser and let the Javascript run to put the content on the web page before grabbing the data, and this takes time.

So go take a look.  The script skips names when any errors occur, so there may be some valid names not included in the screens; I saw that the script kicked out PEP for some reason.  I have to do this so the program doesn't crash in the middle of a long run etc...