Bullish For Next Ten Years?

I just found this chart in a promotional video from Davis Funds and I thought it was interesting in that it illustrates what I tell people about dumping stocks because they say stocks are no good. 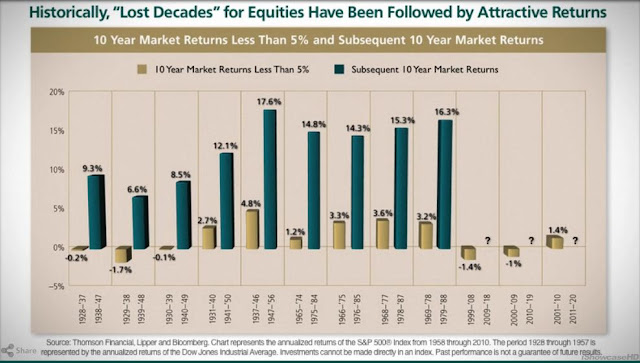 A flattish ten-year period is not so uncommon.

I show this not to say that we are about to enter a big bull market, but more to caution people against reacting to historical performance.  Just like the financial press rushed to promote stocks in 2000 saying that you can't afford to retire unless you own a lot of stocks and showed historical performance to prove it, they are now pretty busy telling us that stocks just don't cut it and show the returns of the past decade+ as proof.

This chart shows you that if you react to historical returns like that, you may come to regret it.

This is not just retail investors, of course.  Institutional investors too are rushing into all sorts of non-stock investments.  I like stocks when others are running from them.

Of course, this is not to say that we can't have another decade of a flat market.  Bears will point to Japan and say, gee, you could've said the same thing in Japan back in 1999 (ten years after their stock market peak in 1989), but I would argue that stocks were far from reasonably priced back in 1999 in Japan, even ten years after the start of their bear market.

In any case, I understand what people would say when seeing this chart:  government debt levels are far higher now than during any of those other periods in the chart, Europe is a disaster,  margins are at abnormally high levels so even with low p/e ratios the market is unsustainably high etc...  Or one can argue that the entire 20th century was a bull market and that has ended so these historical figures don't matter now in a bear market century etc...

This all may be true.  This time may be different.  Who knows.   At the very minimum, I would say that the take-away from this chart is to be very skeptical of people who tell you to stay away from stocks because they haven't performed well recently.

By the way, the videos posted there are not bad at all.  Chris Davis is a solid value investors with the right approach and principles and runs a low turnover, high quality fund.  I don't own any of the funds, though.