OK, so Kraft announced that it will split into two; a slow growing U.S. grocery business and a fast growth global snack company.

First of all, let me just say that Kraft is a decent looking company trading at a decent valuation so it's not a bad stock to own by itself.  Warren Buffett owns it and likes the business and has said that Irene Rosenfeld (Kraft CEO) is a terrific manager and that her operational skills are very good.  What Buffett didn't like is the use of an undervalued stock to pay up for Cadbury, and the fact that Kraft sold the frozen pizza business for a low valuation.  So Buffett doesn't like the financial skills of Rosenfeld and has reduced his stake in Kraft.

But anyway, back to the topic.   What kind of value can be realized by Kraft splitting up into two?  First of all, let me just say that a lot of information hasn't been released yet so an accurate valuation can't be done on the post-split pieces.  How the debt and corporate overhead will be split, etc...

An analyst on a conference call asked Rosenfeld how to look at a post-split valuation of the global snack business, and who the comparables were.  Well, she seemed pretty giddy and said that she will let us figure that out ourselves.  So I did scratch my head.  Is a comparable Hershey?  Cadbury is gone, but can we use the valuation of Cadbury at the time of Kraft's purchase?  That would be 37x the last year's EPS!  37x is too high, but there are lower, reasonable numbers.

Anyway, to keep it simple I will make a very simple assumption.  I will simply assume that whatever operating earnings split between the two segments is will remain the same for the EPS.  In other words, if both businesses account for 50%-50% of operating earnings, then I will just use that to figure out what the eps of each post-split company is.  This is not accurate as there are items below the operating earnings line that we don't know how will be allocated between the two companies.  I assume that a lot of the debt will be carried by the U.S. grocery business.  I think Rosenfeld did say that (but I'm not exactly sure).

I just took the segment revenues and operating earnings from the 2010 10K and divided up the segments myself into what I think roughly approximates the two split companies.  Here is the table: 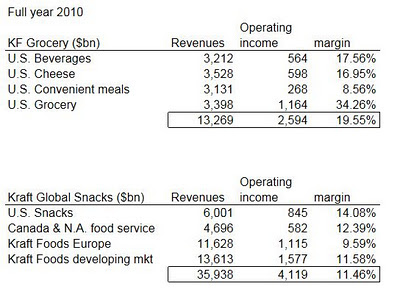 This is not entirely accurate as there may be some segments that are within these big groups that might go to one or the other.  In their September 2011 presentation using full year 2010 figures, they said the U.S. grocery business had $16 billion in revenues and the global snacks business had $32 billion.  That compares to my above quick shifting around that gives $13 billion and $36 billion respectively, so it's a little off but I figure good enough for what we are trying to do here.

This is a free blog so that is close enough.  Perhaps if this was an $2,000/year newsletter, I would need to be more accurate.

OK.  So we notice that the operating earnings split is going to be 61% global snacks and 39% U.S. grocery.

Now we continue to make huge leaps for simplicity's sake and take the full year guidance of eps for 2011, which is $2.27.

Let's not stop there. The year is almost over, so let's use next year's estimates. Analysts estimate Kraft EPS for the year to December 2012 to be $2.52.  So applying the same as above (which is not correct as the global snacks business is supposed to grow faster, but again, good enough for a rough estimate), we get a U.S. grocery business EPS of $0.98 and the global snacks business will earn $1.54.

OK, I like tables, so here are the EPS figures:

You can also use revenue growth assumptions to come up with different EPS estimates for 2012, but I'll keep it simple here.

Now comes the interesting part.  How do you value each side of the business?  For simplicity, I will just focus on p/e ratios here.  Here is a table of comparables.  I got the list of comparable businesses from the Wrigley's merger document from April 2008, but I added Tootsie Roll Industries as there wasn't enough snack businesses.  Tootsie Roll may be too small to be a relevant comp, though.  The valuations are from Yahoo Finance as of now (or a few minutes ago): 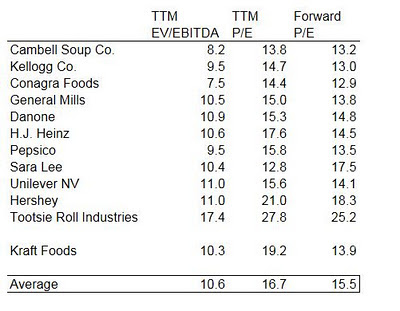 On a forward basis, it seems like Kraft is selling for less than the average p/e.  Excluding Hershey and Tootsie Roll, 13-15x p/e looks to be a reasonable range for Kraft Foods.  Since many of the other companies are U.S. grocery type businesses and not global snack-like, maybe 13-15x p/e is a reasonable range for the U.S. grocery business.  To be safe, let's use the lower end of that: 13x.

Kraft is now trading at around $35/share.  So using a stub approach, the global snacks business is now being valued at $22.26/share.  Since it can earn $1.54/share next year, the market is valuing it at only 14.5x p/e.   I think this is the essence of the story.  The global snacks business will grow revenues and earnings at a double digit pace, which is not what the above comparables are doing performance-wise.  And yet, the market is only giving it the same sort of valuation, within the 13-15x valuation range in the table above.

Now, the question is what exactly is it worth?  One comparable may be Hershey.  And maybe Tootsie Roll Industries.  Hershey, though, has only grown sales at 3.3%/year for the past five years and EPS has only grown 2.3%/year over that time.  So despite Hershey's high valuation, it hasn't grown at all and I don't know that growth prospects is any better going forward.

Tootsie Roll Industries is highly valued too, even though it's a lot smaller.  But despite valuation of 25.2x p/e, Tootsie Roll has only grown sales +1%/year over the past four years and EPS has actually declined -3.6%/year over the same time period.

If these no growth snack companies can get a valuation of 20-25x p/e, why can't Kraft's global snack business?

Is this what the activist agitators have been seeing?  Is this why Rosenfeld is smiling when she talks about the split?

In sum, here's the valuation assumptions for KFT.

A Higher Target
Yes, 30x p/e in this day and age seems quite a bit aggressive.   I was looking at the Wrigley merger document from April 2008 for merger/acquisition valuation reference points.  Wrigley itself was bought out at 32.1x then current year expected EPS and 29.2x forward p/e.  Of course, Cadbury itself was acquired for what looks like 37x p/e by Kraft.

I do think a p/e ratio of 30x is highly unlikely to be achieved by the global snack business, but it does make sense to assume that it will be higher than 15x or so.  20x p/e may be a conservative valuation if they do have high growth potential.

Anyway, that's just a quick sanity check on what Kraft might be valued at post split.    Of course I left out a lot of stuff; how the debt and SGA is allocated etc... and assumptions of higher expenses due to reverse synergy (although I assume some of that will be offset by efficiency gains/cost cuts).

Email ThisBlogThis!Share to TwitterShare to FacebookShare to Pinterest
Labels: KFT