The Real Cause of Financial Crisis: Money Market Funds

OK, so that's a dramatic statement.  This post will no doubt come across as way too sympathetic to banks, but since I see that the SEC is looking into money market funds, I thought I'd make a post about it.

This has been a pet peeve of mine for a while.  The banks have been really tarred and feathered since the crisis.  Sure, a lot of what they did was wrong.  Many people made mistakes.  Everyone participated in the bubble, so I don't mean to say that banks are guilt free.

But I do think and have thought that the focus on banks has been overdone, especially in the press and in Washington DC.  I remember reading an article in the Economist about what Washington is doing to banks and a writer said that it's like a bar brawl; when a fight breaks out in a bar, you don't go after the guy who started the fight.  You just turn to the guy sitting next to you that you never liked and hit him.  Not because the brawl is his fault but just because you don't like him and now is a good time to hit him.

That really sounds spot on to me (what does the financial crisis have to do with credit card fees?).  When the banks are down, people pile on.  It was a good time to just hit and kick the banks since they were already on the floor.

It seems that there is so little focus on trying to get to the root of the problem.

Volcker Rule, FHA Loans
I remember reading all this stuff about the Volcker rule and hearing at the same time that even *after* the crisis, the FHA was guaranteeing mortgage loans with only 3.5% - 5% down.  I was like, "huh?".  We want to stop the banks from trading their own capital (proprietary trading, by the way, had nothing to do with the financial crisis.  Merrill Lynch got killed on warehouse/inventory positions.  Same with Morgan Stanley.  It's true that some of the positions may have been shifted into proprietary positions once the securitization markets froze, but the positions were all related to the mortgage "machine" which is all customer-related).

I am one of those people that think that maybe if mortgages were required to have 20% down payment the bubble/collapse wouldn't have happened, or it wouldn't have been as extreme.

Instead people focus on the "evils" of banks.

Glass-Steagall / Too Big to Fail
I always thought Glass-Steagall was outdated, especially because of the disintermediation of the economy over the years.  In the old days, companies relied on banks for loans, but as the financial markets matured, the bond market became a bigger part of fund-raising for companies.  It made no sense to me that a bank would be able to offer loans but not help it sell bonds.  Loans are syndicated and resold too; why wouldn't they be able to offer stocks and bonds?

Also, much of Europe didn't have the same distinction so U.S. banks would be at a disadvantage versus European universal banks in an increasingly global economy.

Too big to fail?  None of the above banks/investment banks that failed were really "too big".  The only big bank that had a problem that fit "too big to fail" was Citigroup, I think.  J.P. Morgan was never at risk.  Bank of America, I think, was fine until they acquired Countrywide and then later Merrill Lynch.  But up until then, I think they were fine and would have come through the crisis with no problem.  They only became "big", probably at the encouragement of regulators.  As Buffett said, they may have unwittingly saved the financial system in 2008.

But boy, was he wrong.

So what went wrong?

Money Market Funds (MMF)
I still think the market would have been able to deal with a Lehman bankruptcy.  What was not predicted at the time was the extent that MMFs were exposed to Lehman paper.  When the Federated Funds "broke the buck", that's when all hell broke loose.

This, I think, is what caused the near depression. When you look at economic figures and comments from CEOs around the world, the Lehman bankruptcy is what caused money to stop flowing and phones to stop ringing.  This is when the economy basically had a heart attack and just stopped functioning.

But it wasn't really Lehman itself that was the problem.  It was the MMFs.

How can MMFs do this to the global economy?

Let's look at what happened.  Read the 2008 J.P. Morgan annual report and Jamie Dimon talks about what happened in September 2008.  Here are some snips regarding MMFs (Dimon only points to this as one of the many causes): 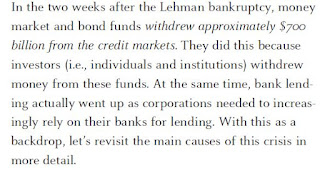 And later in the report:﻿ 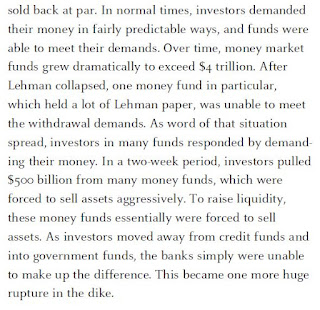 So let's think about this for a second.  $700 billion fled money market and bond funds in two weeks.  Of that, $500 billion was money market funds.  That's an astounding number.

For reference, here are the total deposits as of December 2007 of some of the largest U.S. banks around that time (I used 2007 instead of 2008 because of some large mergers that happened in 2008; 2007 would show more what the typical bank looked like before those emergency mergers):

(I know there are people that would argue that it makes no difference because cash moving out of one place will just move to another so net-net, nothing changes.  But that's not how the market and economy works; when there is a panic and money moves out, yes, they move into treasuries and other risk-free assets and deposits at 'safe' banks and yes the sellers of those treasuries would use that money to redeploy it elsewhere.   But that doesn't happen immediately and that disruption is what causes chaos; not any real disappearance in cash).

The FDIC and the Fed is designed to prevent this.  Notice that no matter how much trouble Citigroup was in at the time, I don't recall anyone withdrawing their deposits.  Even at Wamu and other 'failed' banks, I don't remember hearing anyone moving their deposits out.  There were some cases like Indymac, but I think most failures happened smoothly in terms of transferring deposits to strong banks.

This is precisely what the FDIC is for, and it worked as it is supposed to.

How can that be?!

The banks can guarantee deposits up to the FDIC amount because the FDIC backs the deposits (well, actually, the banks don't guarantee anything; the FDIC does).  And for that guarantee, banks pay the FDIC fees.

So the MMFs were like banks with 0% Tier 1, 2, 3 or whatever capital.  Yes, they are short term and don't make long term loans and yes, they are limited in the credit risk they can take.

But they did take a loss on Lehman paper.

The funds are fighting all sorts of regulations to correct this anomaly.  I don't think they should be allowed to guarantee principle without either an FDIC-like government backing or some capital to support the guarantee.  It just makes no sense at all.

If they only make short term loans, and only to high quality credit, then the government guarantee fee would probably be pretty low, or the capital requirement would be low too; much lower than at banks.

Anyway, to me, that's a huge hole in the financial system that seems like a much bigger problem than anything else I hear people talking about; hedge funds, derivatives, Glass-Steagall, proprietary trading etc...   None of those things, to me, are remotely close to being an issue compared to the MMFs.

It is so ironic that people seem so focused on the complex and rail against it while overlooking the huge risk that exists in the simple, plain vanilla thing that I personally think had a far bigger role in the near collapse of the global economy.

Don't get me wrong.  There was a problem in back in 2008 and we would have had some sort of recession.  I don't mean to say that nothing would have happened if MMFs were properly insured or capitalized. But it does seem to me that it was the single, biggest factor that changed a typical credit boom/bust cycle into a near collapse; look at the economic figures *after* September 2008.  That was not because Lehman ceased to exist.   It was because of a huge 'run' on MMFs.

Anyway, I know this is a controversial issue and many will not agree, but that's OK.  Again, I don't write this to find people to agree or disagree.  I just wrote it because I don't hear this point of view all that much.