Interest rates are plunging yet again in the U.S., and there is talk now of QE3 again.  I'm happy to see things being done to help the economy, but one thing I fear about QE3 is that it will destroy the banking industry.

What Worrys Me Most About Banks
The JPM trading loss doesn't worry me at all.  The multi-trillions in derivatives outstanding doesn't worry me. Dodd-Frank and Volcker Rules don't bother me too much.  A double-dip recession where housing prices go down again?  Nope.  Doesn't worry me too much.  After the crisis, I think loans are written at much better standards and with better loan-value ratios etc.   So I don't worry about bad loans on a double dip recession as much.  Banks also have much more capital and their risk management is much better than pre-crisis.

So what worries me more?    Take a look at Japan.

Japanese Banks
Check this out.  This is some data I pulled from the 20-F filings of Mitsubishi UFJ Financial Group (MTU)  in Japan, which I think is the largest bank there now.  It's pretty much regarded as the best bank, kind of like JPM or what C used to be. 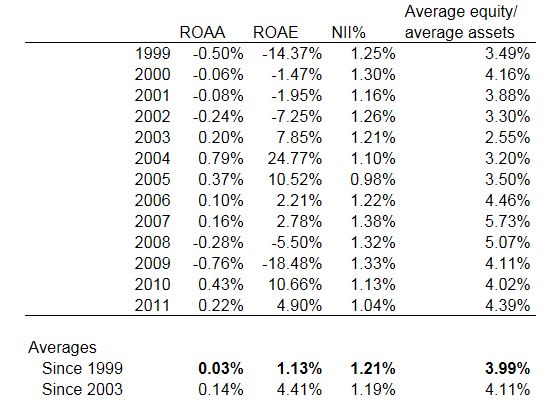 This data only goes through the year-ended March 2011 because they don't file their 20-F until July or so, and they only publish U.S. GAAP results in the 20-F, I think.

The years with large ROE are years where they had big gains in investments, foreign currency or some such other non-recurring things (as far as I can tell from a quick reading).

So why is ROA so low?  Of course, because interest rates are so low over in Japan and has been for many years there.

Net interest margin since 1999 has averaged around 1.2%, and it's been pretty consistent.  Notice that Mitsubishi is more than two times levered than U.S. banks too, having an equity to assets ratio of less than 5%.  U.S. banks are more like 10 times levered now.

So let's look at some of these figures for large U.S. banks.  I'll just look at a couple as they are more or less the same.

Look at this and compare it to MTU's above.


It Can't Happen Here
I remember having many discussions in the late 90's and early 2000's about the U.S. bubble and how we can follow Japan.   The usual response was that something like Japan can't possibly happen here.  Bernanke also said it can't happen because the U.S. Fed will respond differently.  Everything in the U.S. is way better than it is in Japan (disclosure, regulation etc...)

If you said that short term interest rates will be zero or near zero in the U.S. like Japan for an extended period of time a few years ago, people would have laughed at you.  In fact, I didn't predict anything, but people did laugh at me when I suggested that it could happen.

If you said then that long term treasury rates would go below 2%, nobody would have believed it.

The Fed will print money like crazy, causing inflation and interest rates would go up, not down.  So a sub-2% interest rate is impossible, they said.

During the financial crisis, the 0% short term rate was deemed a short-term, panic/fear driven interest rate that won't last too long.  But here we are, years after the worst of the crisis with short rates still down here and long term rates much lower and hedge funds still trying to pick the top in the bond market.

This is so reminscent of Japan all throughout the 90s.  Shorting JGB's must be one of the deadliest hedge fund trades ever done (on a cumulative loss basis).  The U.S. treasury short trade is looking a lot like that now.

10 Year Government Bond Rates
So anyway, even though most would have thought it impossible even a year ago, here we are with U.S. 10-year treasury rates at 1.46% or so.

Dimon has been asked about this on conference calls, and he feels that although he can't predict interest rates, he thinks it will eventually get back to more 'normal' levels.  I think Buffett said the same thing; he feels that the bond market is the biggest bubble of all time.

This sounds right to me, but I just can't get over the Japanese JGB bubble that has been ongoing for 20 years!  And if it continues here for longer than many think, what happens to the banks?  Don't even open up an income statement of a U.S. bank and try to plug in a 2.0% or 1.5 net interest margin to model potential earnings (or losses).  Your blood pressure will go up.

This is not my primary, base-case scenario.   But to me, this is a bigger risk factor than what most people worry about; risk of European exposure and all that.


Inflation is Inevitable
Everybody keeps saying that inflation is inevitable, but this Japan scenario keeps bugging me.  I know they say Japan is different (debt internally funded etc.), but each time we say it can't happen here, it seems we take a step closer.

Many hedge funds are positioning themselves for inflation but I think Prem Watsa of Fairfax is the only one I know of betting outright on a Japan-like deflationary scenario.  (Of course, all bond investors are betting on deflation even if they are not actually thinking about it and buying bonds by default).

Maybe the tail hedge here is actually long treasury zeros instead of long gold.  As they say in the trading world, if it's obvious, then it's obviously wrong.

Anyway, I don't know how this inflation/deflation resolves itself.  I suspect both sides will be right over the next few years; it's just going to be tough to know when which one happens first etc.  (deflationary collapse followed by hyper-inflation, or maybe we just muddle through...)