This must have been one of the most anticipated corporate conference calls ever.  I have to admit to looking forward to it too.  Anyway, we finally see the big number.  This is not a summary of the conference call which lasted two hours, but just some thoughts.

Whale Loss
Rumors of losses were as high as $9 billion at one point but settled around $5 billion for the quarter.  The announced "whale" loss was $4.4 billion; the actual loss was $5.1 billion but they shifted $460 million (after-tax) of the losses to the first quarter as they found the marks were bad in the first quarter (I think they said that the 'wrong' marks were still inside the bid-ask range, but not credible).

The total loss year-to-date is therefore $5.8 billion compared to what we thought was initially a $2 billion loss (that Dimon said could easily get worse over time).

So that is a pretty stunning loss.  But what is even more stunning to me is that JPM was able to earn an ROE of 11% and ROTCE (return on tangible common equity) of 15% despite booking this loss.  Sure, it includes a bunch of one time offsets to the loss.  So let's take a look at that: 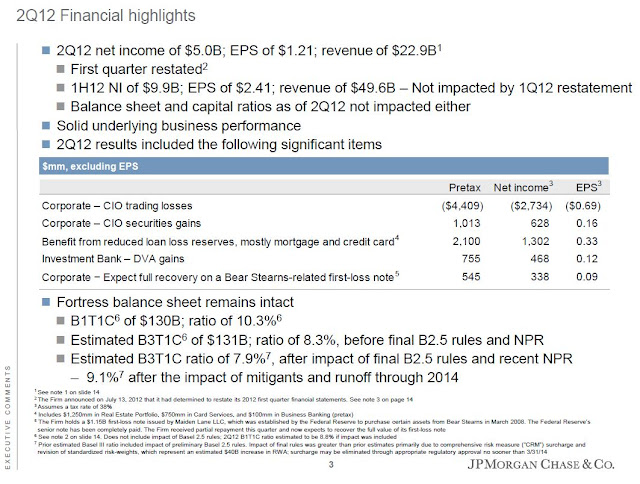 They earned $5 billion net in the second quarter, but let's take away those one time gains.  They realized some gains in their CIO securities portfolio, had reserve releases, DVA gains in the investment bank and a markup in their Bear Stearns note.

So we can subtract all of that from the $5 billion net income in the quarter:

That's still an annualized 5% ROE and 7% ROTCE; pretty impressive given the big one time loss.

Here is the book value and tangible book value of JPM over the years and through the second quarter of 2012: 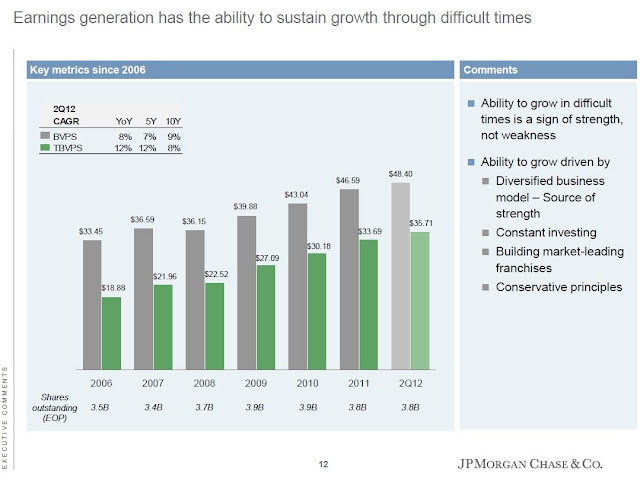 Despite the "huge" loss, JPM grew tangible book value per share an annualized 12% since the year-end 2011.   BPS grew an annualized 7.8% year-to-date.
It looks like all the business lines did pretty well in the second quarter.  Revenues and earnings will fluctuate so let's just look at the ROE by lines of business: 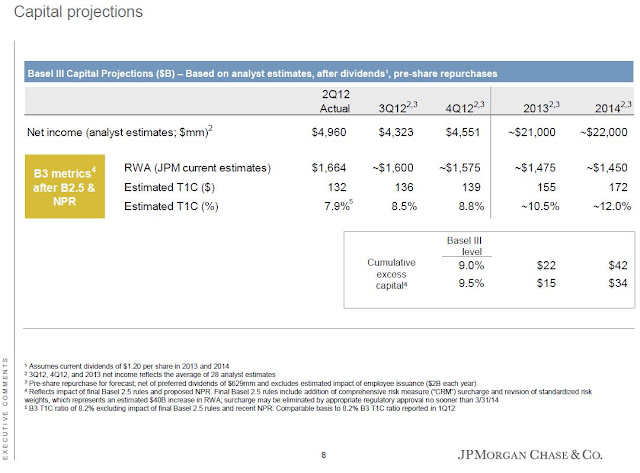 Dimon did say that capital and earnings-wise they can start repurchasing shares any time but after discussions with regulators and the Fed, they will only do that after submitting a capital plan to the Fed; they hope they can restart share repurchases early in the fourth quarter of 2012.

Dimon also said that they do plan on paying out 30% of normalized earnings over time, but that they can do better than that and hope to do so.

$24 billion in Earnings Still Doable?
JPM continues to believe that on an absolute and static basis, earnings should be $24 billion on a normalized basis.  This has been a figure they have been using in presentations for a while in demostrating the core earnings power of JPM.

Someone asked during the conference call whether this is still the case after the CIO incident since the CIO did contribute to earnings in the recent past (the question was asked despite the fact that it was stated clearly in the presentation that JPM still believes the $24 billion normalized earnings figure to be good).

Wouldn't the winding down of the synthetic credit portfolio reduce the risk in the CIO and therefore future returns?  The answer was a simple no.  The CIO is a conservatively managed, low return portfolio and that won't change going forward.

Too Big and Too Complex to Manage?
Someone asked if this incident proves now that JPM is just too big and complex to manage and Dimon simply responded that he doesn't think so.  He mentioned that hundreds of small banks have failed, monolines have failed etc.  I don't know why people keep saying this when the big failures during the crisis were for the most part, non-complex institutions (FNM, FRE, monolines, MER, BSC, LEH, WM, etc...).

He also mentioned the benefits of the diversified business model and the cross-selling advantage.

Perspective
People keep talking about this as a big failure in risk management and a reason JPM is too big to manage.  It was a loss big enough for Dimon to be called to congress.

So if this mega-loss didn't happen, the six month ROE and ROTCE would have been 13% and 18% respectively.

Think about that.  So Dimon was called down to congress to face grilling in both the house and senate, people are calling JPM too big and complex to manage and some other person said JPM has "serious managerial issues" (a former prosecutor, governor and 'trick').

Let's get this straight.  So a bank manages to earn only an 11% ROE instead of 13%, and this is a major problem?

I can point to a lot of financials that earn nowhere near 11% ROE and their ROE fluctuates much more wildly and nobody utters a single word (what happened to Goldman Sachs' ROE in recent years and especially last year?!).

LIBOR
Of course, there were questions regarding LIBOR, but Dimon won't comment on the issue.  He did say that not all banks are in the same position.

NIM
There were questions regarding the yield curve and net interest margin.  Dimon said that even with the current yield curve, they are making good returns.  He also said that the yield curve flattening is entering it's final stages; that it is coming to the end or final stage.  I don't know what he meant by that; if he thinks that the flattening will reverse and steepen in the future, or if he means that the curve can't get that much flatter and JPM will keep doing well regardless.

He did say that if the curve keeps flattening, they will adjust and still will make money; they will only do things for good returns.  There may be some repricing, adding fees for some services if they can't make money otherwise etc...

Either way, Dimon didn't seem all that concerned about it.

Isolated Incident?
Many people are skeptical that this is a one-off event.  People see the huge derivatives book and are afraid there might be a big "oops" there too some day.  What do I think?

I really do think this is one-off.  This is not to say that JPM won't make other mistakes.  I'm sure there will be other problems in the future.  It's a risky business. But what happened at CIO is not really indicative to me how good or bad risk management at JPM is.  I think in other business lines, the risk management is very tight.

There have been reports recently about the resentment from the investment bank how lax the risk management was over at CIO compared to what the IB traders had to go through.

This is because I think Dimon had a lot of faith in Ina Drew and cut her a lot of slack.  In hindsight that was a mistake because she obviously screwed up.  But I do understand that dynamic.  There are certain areas where a CEO might cut someone some slack for a certain project and keeping them outside of the general corporate infrastructure.

This is what I thought happened when I first heard the news and everything I've heard and read since then confirms this view.

So in that sense, I really do think this is a one-off event.

Going Forward
Dimon said that under stressed conditions, the structured credit portfolio can lose another $1.7 billion.  But that's under a stress test-like scenario, not an expected loss.   I think it's safe to say that the worst of this trade is over.

Stock Still Cheap
The tangible book value per share of JPM was $35.71 at the end of June and the stock even after rallying 6% today is trading at $36/share so I think it's pretty darn cheap.

JPM has grown tangible book value per share throughout the crisis at 12%/year and in the first six months of the year it grew an annualized 12% including this huge loss that shook the financial world.  That's insane.  Imagine what JPM can do in more normal times!

So yes, I do still believe that JPM is a great value at tangible book per share.

I don't think Buffett has changed his views about JPM despite this incident (he announced earlier this year that he owned shares of JPM in his personal account).  Kenneth Langone was interviewed briefly outside of JPM HQ today and he said that if he can only own five stocks, JPM would be one of them.  He said this incident shows why Dimon is such a great CEO (how he is handling it), and I do agree with him on that.  I do wonder what the other five stocks are, though (other than HD).