Bank of America announced their earnings and it looks OK.   Of course, there is still an issue with low interest rates and loan growth like at other banks.

This is not intended to be a full recap of BAC's second quarter.   I don't want to comment on every quarterly announcement of companies I talk about here unless there is something I want to say about it.

And since I recently posted about the value of Merrill Lynch, as a sort of follow-up to that, I decided to take a look at the old Merrill and see if they're still doing good and it turns out they are still doing pretty well; better than Goldman, in fact.  So what's wrong with Goldman?  That's another question for later.

Anyway, here are the results of the three segments that are sort of the old Merrill Lynch even though Global Banking includes the investment bank (underwriting, advisory etc.) and what used to be the Global Commercial Bank.

So I just grabbed these figures from the supplement so I can add it all up to see what the aggregate result of the old Merrill is (EC = economic capital, which is basically tangible equity. GWIM = Global Wealth and Investment Management, units = $mn): 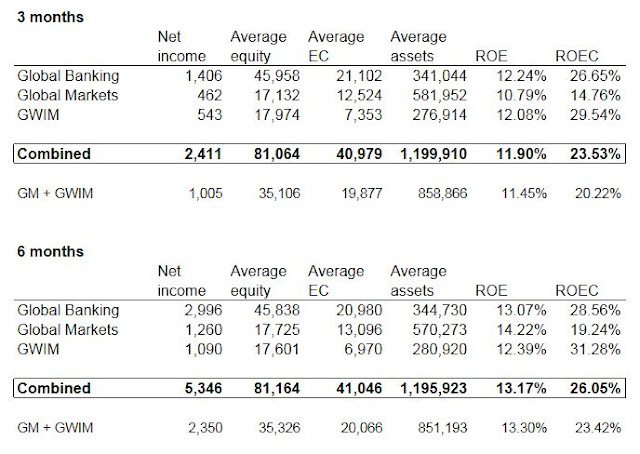 So in the second quarter, the old Merrill earned an ROE of 11.9%, not bad at all.  In case some people object to the mixing of the commercial bank with the investment bank, I also put a row at the bottom which only includes Global Markets and Global Wealth and Investment Management.  The ROE figure is close, so I think it's OK to look at the whole "combined" figure; the commercial bank doesn't distort that too much.

In the first six months of 2012, the old Merrill earned an ROE of 13.17%.   This is a pretty solid result, and the results seem solid across the segments.

So Merrill compares very favorably against GS, but not so great against JPM.

Of course, since these equity figures are internally allocated equity figures, it's hard to say if they are 'realistic'.  I think management tries to allocate enough equity so that on a stand-alone basis they would be able to conduct business at the same level. But that's still quite a bit different than actually being stand-alone like GS.

So what's wrong with GS?
It seems like GS is being very conservative and cautious; they do have excess capital and liquidity and their VAR is, I think they said, the lowest it's been since 2006.  They are clearly being very cautious.  On the conference call they do sound confident that opportunities will arise but they just don't know when. They do talk about having a lot of capital ready to deploy, and that they have a lot of operating leverage so that when things stabilize and pick up, they can really make some good money.

Yes, one point is management; GS is being very conservative for whatever reason.    Does this have to do with GS being independent?  Do they have to be more conservative than JPM and MER because they are not part of a bigger bank and therefore there is nowhere to turn if conditions worsen (in terms of reallocating capital/liquidity to it)?

I still like GS, and I do believe that GS knows what it is doing and is waiting for the right opportunities to deploy capital profitably and I don't think this single digit ROE is going to continue forever (I know many will disagree with that; many will say, ha, told ya so.  Investment banking is dead!).

Diversified Business Model actually GOOD?
So I was wondering if the superiority of JPM and MER versus GS is the diversified nature of JPM and BAC.  One of the benefits of Berkshire Hathaway is that cash all goes to Omaha and then it gets redeployed by Buffett according to where the best opportunities are.  So if you are a furniture store not doing so well but generating cash, you don't have to reinvest the cash in the business; you send cash to Omaha and Buffett will deploy it where he sees good returns.

This is one of the benefits of the diversified financial institutions too which was popular back in the 1990s and 2000s; this idea is not so popular these days, though, obviously.  But these things seem to move in cycles.  Sometimes a diversified model is good, at other times it's bad.

So in the case of JPM, they can deploy capital where it sees opportunity.  What's interesting is that JPM's allocated equity to the investment bank is constant at $40 billion, which means that all returns generated are paid up to 'corporate' or wherever it goes.  It doesn't build up equity and then create the need to invest more.

Dimon will up the allocated equity on an as-needed basis.

On the other hand, GS has a very focused business model so when capital builds up, it just stays there at corporate (or wherever) with nowhere to deploy the capital.  Of course they can pay it out as dividends or repurchase stocks, but then that would be a permanent return of capital to shareholders and if opportunities suddenly arise, they won't be able to get that capital back.

At JPM, if something happens and opportunities arise, they can shuffle capital back and forth between business lines.

So that does increase capital efficiency.  I understand that there is an argument that this sort of thing may actually encourage too much risk-taking and an eventual blowup.   But as I said above, you can take any good thing and take it too far.

(Also, I will leave out the benefits of cross-selling that JPM and MER might be enjoying at this point).

I know this argues against the BAC-MER spinoff, but it is something that came to mind when going through the second quarter numbers for these institutions.

The Opposite Question
All of this ironically raises a question that goes the other way (that actually used to be asked all the time); should GS be a part of a larger financial institution?!  That would be the corollary to all of the above observations.
I have no strong views on that at this point, but it is an interesting, contrarian thought (contrary to people calling for MER to get spun off, for big banks to split up etc).