This is not a market-timing blog or anything like that, but every now and then I get the itch to make a post about it even when I have no real information or analysis to offer.  So most can skip reading this post.

Anyway, last October and November, I made a bunch of bullish posts on the stock market.  When there was a lot of fear of a real European implosion, I wrote that a crash is unlikely (read here).

I was thinking about this again recently, and if someone asked me now if a crash may happen, I would say it is much more likely now than last year; I wouldn't so strongly make a call against a crash.

One obvious reason is that the market is up a bunch since then and things aren't as cheap as it was.

Here are some charts: 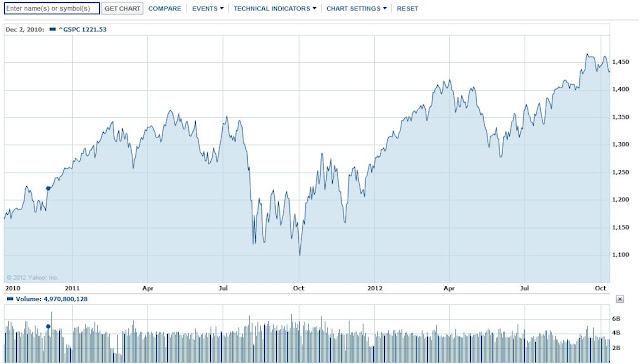 You can see it wasn't so hard to be bullish last fall; there was so much fear and hysteria in the market.  Now the market is much higher and the VIX shows no fear at all.  I am not one of those people calling for a crash every time the VIX goes below 20% or near 15% or whatever, but the market is much more ready for a correction than it was last year (when the market was already in a correction).

Credit spreads seem to be at historical lows too, and that's also usually a sign of compacency.

This doesn't change my long term favorable view of stocks and this shouldn't make any different to true value investors; value investors don't make money getting in and out of markets.  As a long term value investor, I would clean house and dump things that are luke warm and make sure what's in the portfolio are good, solid longs.   Other than that, I wouldn't advocate doing anything about this; just sit tight, come what may.

Shorts Give Up, Longs Lag
I don't have any data, but it sort of feels like this market just went up and blew out the shorts all year, and the underinvested longs lagged severely and had to jump in.   I think as shorts throw in the towel, it's probably a good time to start looking for good shorts (if that's what you do).


Apple
Apple has been nagging at me too for a while.    Apple is still cheap excluding cash on the balance sheet, but at this point it sort of feels like this Apple fever is sort of peaking out.   What bothers me is that I can't really analyze this in a meaningful way.  It's just a gut feel sort of thing.  It just feels like Apple had a parabolic run and peaked out even though the business continues to do well and there is still probably a good runway for growth going forward.  And the stock is still cheap.

One thing that is worrisome is how Apple was so much a product of Steve Jobs.  Reading about Apple and Steve Jobs, you realize how important he was to the success and dominance of Apple.

I read quite a bit about Sony recently and it is interesting to note that Sony also lost it's way after the passing (or retirement) of Akio Morita, the charismatic co-founder of Sony.

When you have a strong leader like that who is a founder, things can get done that can't happen in a regular company (not run by the founder).  In fact, in the book Sony versus Samsung,  the author states that one reason Samsung was able to clobber Sony was because Samsung was still run by the founder who was able to get things done.  No successor CEO can possibly have the same kind of power (even if they have the authority).   When Morita wanted something done, it got done.  When Idei wanted something done, it often didn't get done.

And yes, I understand Apple is not just about the gadgets; it's the eco-system.  Other tech/gadget companies didn't have the same synergistic thing that tied everything together.   The iPod is no Sony Walkman, and the iPhone is no Razr.

Here too, I think online app stores and things will eventually catch up to Apple;  tablet computers too will eventually become commoditized with more or less similar features and similar apps avalailable online.

But what really haunted me was the fact that Apple is building all these expensive stores all over the place at the best locations.    This positive lollapalooza can work wonders when there are great products to sell, but what if the run in hits runs it's course?  What will they sell at these spectacular retail locations?  Maybe it doesn't matter; they might make so much money and get their investments back so quickly that closing them if needed may not be a problem at all. 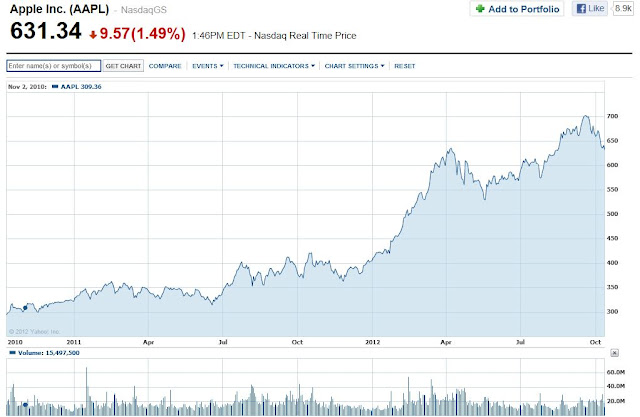 Apple had a really good run after the passing of Steve Jobs.   It's almost as if they were worried, and then decided after the fact that it just doesn't matter that Jobs is no longer there.
The biggest worry, though, is that Apple seems to be the favorite of so many different people; hedge funds, mutual funds, retail investors etc.
There have been some articles written here and there about how over-owned Apple stock is.  I haven't done any of my own work on that, but it does seem to be a very popular holding.  And no matter who you ask, they all say "it's cheap".
I don't know.   You don't get rich shorting low p/e stocks,  but this one might actually be one to look at.  Of course, like any short, if it runs against you you can't sit on it for long as these things can really go parabolic and you can lose tons of money.  And a lot of very smart people are long this thing and I am definitely not smarter or more informed than them (in fact, I have very little information on Apple).  It's just one of those intuitive things.
Anyway, I know this post is a little different than what I usually post (my gosh, I sound like a day-trader), but it's something that has been on my mind recently.
And yes, I will dabble, perhaps foolishly, in Apple on the short side.
﻿
Posted by kk at 2:48 PM