So Apple has fallen below $400 and it seems like most people still talk about how cheap it is. Yes, it does look really cheap.  But others have pointed out that Apple is only cheap if they can maintain their sky-high margins.

I decided to take a quick look at this since I sort of follow Apple and have posted about it before.  I still don't like Apple as a long term hold and am short the stock off and on (I did flip long once after my Apple LEAPs post, but sold out of it deciding that it doesn't make sense to go long a stock I didn't like just because the stub/LEAP idea was interesting).

Anyway, my views on Apple hasn't changed much (see Apple is No Polaroid).  The JC Penney fiasco (I followed JCP too but fortunately stayed away from the stock as I thought it was 'too hard') sort of reinforces the idea that Jobs was indeed an incredible talent and people who have done well with Jobs may not be able to retain that 'magic' without him.  Of course, this probably has nothing to do with JCP as Ron Johnson was a successful retail executive before going to Apple.  But anyway, that's whole other topic.

Analysts estimate that Apple will earn $44/share in the year ended September 2013.  10x that gives us $440 (interest rate income should be deducted from this, but since rates are so low I won't bother).  At 10x that, we get $550/share in total value for Apple.  With Apple trading at $400/share, that would be a 30% discount to what it's worth.

Margins
One of the keys in the Apple story is the margin.  Can this be sustained?  Of course, what Apple comes out with next is the big story for the long term of Apple; if they can't keep coming up with hit products like the iPod / iPhone / iPad, then Apple is not worth anywhere near what it is today.

People say that this can't be maintained as their competitors operate with half those margins.  If the gap between products keep closing, how can the spread in margins be maintained?  I think that by many accounts, the difference between Apple products and others are rapidly shrinking.

Anyway, I think the one big competitor is Samsung.  They do break out sales and operating profits for their mobile segment (IT & Mobile Communications).  This segment in 2012 had operating margins of 18%.

If Apple had operating margins of 18%, how cheap is Apple stock then?

Of course, there is no reason why Apple's operating margin has to go down to 18% right away if ever.  But I do think that the historical tendency in these fluid, fast moving industries is that excess margins get competed away.

So anyway, maybe we can't really compare Apple to Samsung.  They are different beasts, and Apple does in fact own the operating system and the eco-system whereas Samsung only provides the hardware.  This is the tricky part.  We know that software has much higher margins than hardware (look at Dell versus Microsoft, for example).  So maybe Apple will always earn a higher margin.

I figured that Apple always did both, so why not take a look at Apple historically?

Here is the gross and operating margin history for Apple since 1992 (I can only get data back to 1992): 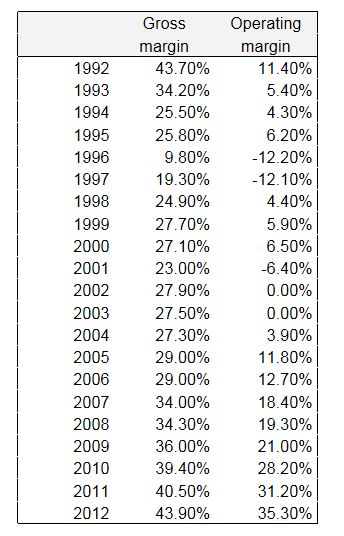 So even though Apple did both the hardware and the software, their gross margins were never above 30% until the iPhone era.  Their operating margins were subpar too for most of the period since 1992.

Yes, we know that Jobs left in the 80s and Apple was mismanged for years.  But Apple products were still loved by fans and were often said to be the best computers out there.  And yet this is their margin history.

Things are different now for sure once Jobs came back and fixed the place up.  But there is no guarantee that Apple won't go back to what it was before Jobs came back.  It can still be making the best products, but the above shows that that doesn't guarantee fat margins.

"The downtrend in gross margin was primarily a result of pricing and promotional actions undertaken by the company in response to industrywide pricing pressure."

And here's a chilling quote too:


"Although the company's gross margin was 27.2% for the fourth quarter (1994), resulting primarily from strong sales of Power MacIntosh computers and the PowerBook 500 series of notebook personal computers, it is anticipated that gross margins will remain under pressure and could fall below prior year's level worldwide due to a variety of factors, including continued industrywide pricing pressures, increased competition, and compressed product life cycles".


If operating margins go to 10%, which would be respectable for a manufacturing company and happens to be the long term average for Apple since 1992, let's see what Apple looks like.  With $180 billion in sales (never mind for now that if Apple takes pricing actions to reduce margins, sales would change too but there is no telling by how much).  That would give us an operating profit of $18 billion.  At a 25% tax rate, that's a $13.5 billion net profit and $14.40/share in EPS.  10x that would be $144/share and add to that the $110 in cash and you get $254/share total value for Apple.

Of course, I don't expect Apple to post a 10% operating margin any time soon.   I'm just fooling around with figures to get a sense of this thing.

I know that the universal view is that Apple will keep creating new products just as industry-changing as the iPod, iPhone and iPad.  But if they don't, Apple may, over time, start to look more like the long term Apple than the short term Apple (with hit after hit).

In that case, the stock would be worth much less than it is now because you will have years of good hits and years where nothing really interesting happens and industry competition eats away at margins (like it has before).

Again, this is not to say that this has to happen any time soon.

Increasing Pricing Pressure
I don't cover this industry so this is just a casual viewpoint, but I do think that there will be a lot more pricing pressure in the next couple of years.  I'm not just talking about Samsung and other gadget makers catching up.

I think the mobile industry is getting more and more competitive and it seems like that maybe growing through acqusitions and subscriber growth may be coming to an end.  When they are adding new customers and growing through acquisitions, Apple did great because the iPhone was a great way to add subscribers.

As this starts to peak out, you then get more and more price competition. When that starts to happen, then mobile operators start to look to cutting costs to provide cheaper service.

John Malone was on CNBC the other day (I may post about that later too as it was a fascinating interview on why he bought Charter Communications) and he said that he wants to consolidate the cable industry as an offset to the content providers.  He says that cable bills (due to content prices rising) has gone up so much over the years that people can barely afford it anymore.  The business model, he says, is unsustainable (mostly due to the expensive sports content that 80% of the people would not willingly pay for at wholesale).  He thinks cable will be unbundled and the old cable model will be gone in a couple of years.

This is not the perfect analogy, but I do sort of feel like the same thing is happening in the mobile market. Phones get better and more expensive to the point that people can barely pay their phone bills.  And like ESPN in the cable world, a lot of dollars seem to be going to the phone makers (Apple).

When phone companies start to see their subscriber growth stall, growth through acquisitions plays itself out and margins get pressured due to competition, it's only a matter of time before they start looking at where those dollars are going and demanding better deals.

But again, I don't follow the industry so this is just a casual observation and not expert insight at all.  We don't have to be experts in an industry to know which direction things tend to go (increasing competition = lower margins.  When customers (mobile operators) face margin pressure, they pressure their providers (phone manufacturers) etc...).   Only the timing is difficult to get right.

Conclusion
This is just a quick look at Apple.  My view hasn't really changed, but with the stock down so much it's not as interesting a short as it was last year.  But there could still be a lot more downside if these margins can't be maintained.

For these companies that depend on 'hit' products, I think it's really dangerous to normalize, or capitalize super-high margins far into the future (which is what you're doing when you put a 10x multiple on it).

I understand the bull argument too.  Apple has the eco-system, it's not just a gadget marker.  It has the great stores.  But to a large extent, I think these things are tied to and depend on Apple making cool gadgets.  Who the heck would go to an Apple store if they didn't have cool products?  Who would download anything from the app store if they didn't have the latest cool gadget?

Lollapaloozas (Munger's definition), like leverage, can work both ways.

Although I am way less bearish than last year, I am still very skeptical of this stock.  And yes, I know, to the bulls this whole post must come across as totally ludicrous.  I have no idea what is going to happen.  This is just sort of a thinking out loud thing.

Oops, and the title of the post:  I was going to make some comments about Newton's laws of motion, the apple etc... but forgot to do so.  But never mind. You can imagine for yourself all the bad jokes I might have come up with...