So the 2012 annual report is up on the website.  They revamped it and Loews even has a new logo.

Here is the new logo:

I'm not an art major or anything like that so I don't know anything about it but my first impression was that this looks a little retro, even Art Deco-ish.  Loews is going for a more contemporary look with this, apparently, but it looks more retro than modern.  But then again, what do I know.  I'm sure they paid good money to a well-schooled designer to create it so it must be good.

For reference, here is the old logo:

Not to complain too much, but many of the materials on the website including the ones updated in 2013 still has the old logo.  That sort of spoiled the 'freshness' of the new website.

Anyway, what the heck am I talking about?  Who cares.   Let's look at some stuff in the annual report.   This is not a summary by any means, but just random comments that came to mind as I read through the report.

...and the usual shares outstanding comparison.   They are very good allocators of capital and they do buy back a lot of stock.  Share count is down by 2/3 since 1971 which is very reassuring; these guys aren't going to go on a buying binge just to get bigger or use up excess capital.

They explain their approach to investing.  I think investors are antsy that L is sitting on so much cash; they wonder when they will do a big deal that might get the market excited about L.  So this is their response to that, I suppose. 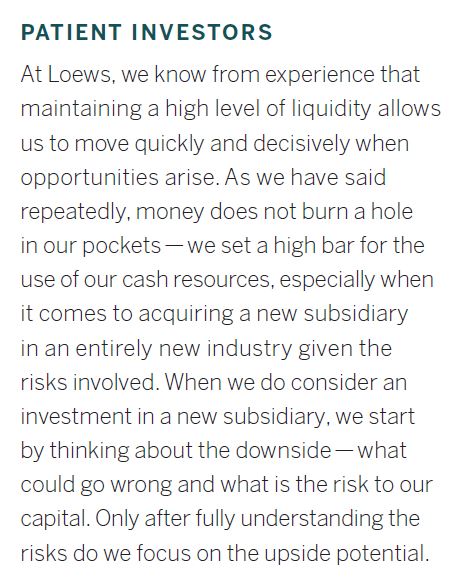 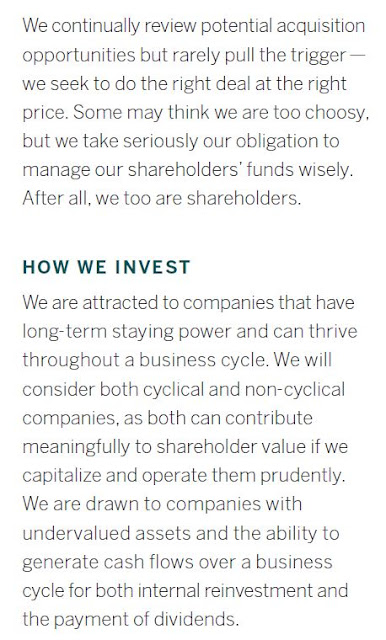 Substantial Investments
Tisch did say that although they haven't done any large acquisitions, they have been investing actively at the subsidiary level.  L has spent or committed $6.5 billion since 2010 through their subs.


Sum of the Parts Valuation

And as usual, here is the sum of the parts valuation of L they include in their annual reports and presentations (stock price data as of Feb 1, 2013).   I haven't talked about the numbers in this post at all since I already did some work on the 10-k in my previous posts:  Loews Adjusted Book Value Update and More Adjustment to Loews Book Value.

Hedge Funds
L mentioned hedge funds in the annual report, that they invest 5% of CNA's investments in limited partnerships.  People are always asking who they allocate capital to, or what the performance is like.  In the annual, they said that in the past 15 years the partnerships have earned 11%/year.  In a recent interview, Tisch said that the hedge funds over time have earned 5-10% more than the 3 month treasury rate.

Also, at the website on the annual report page is a presentation called "Company Overview" which is worth reading.

From there is a little more about L.  I won't summarize everything that's in there but here are some interesting things I'll cut and paste here.

First is how well Diamond Offshore and Boardwalk has done for L.  People criticize Diamond Offshore as having an old fleet, but Tisch explains in the annual report that the age of the fleet might be old, but they have spent a lot of money building new rigs and rebuilding old ones and these rigs do get contracted out at good rates so that's what counts.  Diamond's returns over time is shown in a table below.  Also, L has taken a lot of cash out of Diamond over the years.  Boardwalk has also done well and even though they just invested in 2003, they have already gotten back their total investment (invested a total of $3.2 billion and got it all back already and they still own a bunch). 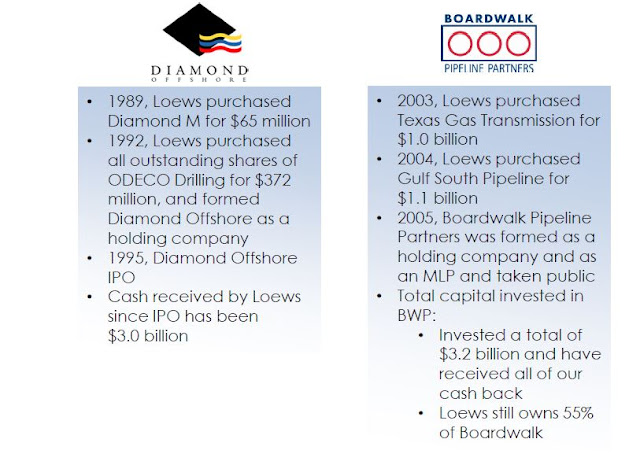 The company overview presentation shows some promising trends in their subsidiaries.  Here's one that Tisch has been talking about; the firming of pricing in P&C insurance: 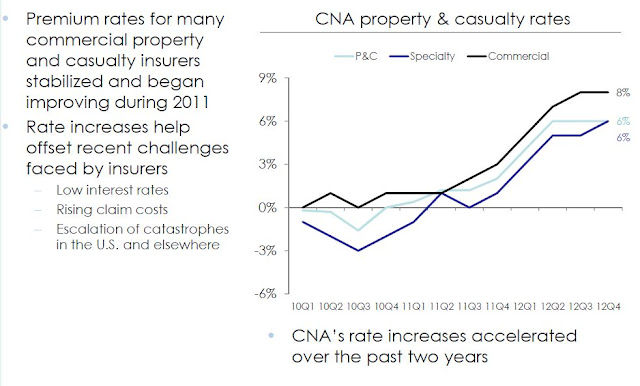 If this continues, obviously it would be good for CNA, which accounts for a large part of L's value. ﻿
﻿
Contrary to what you would imagine, ultra-deepwater day rates are trending nicely, getting back up to the 2007-2008 highs.  This is good for DO, of course, since they have some new rigs coming online soon. 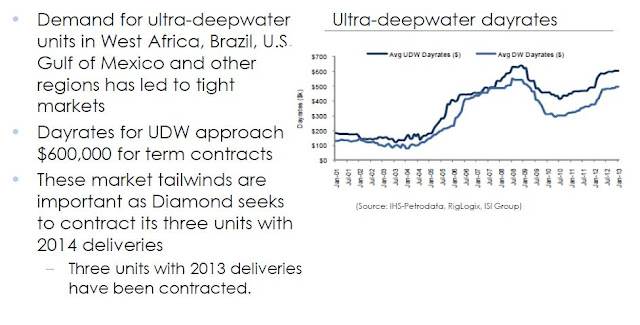 DO has performed well over time: 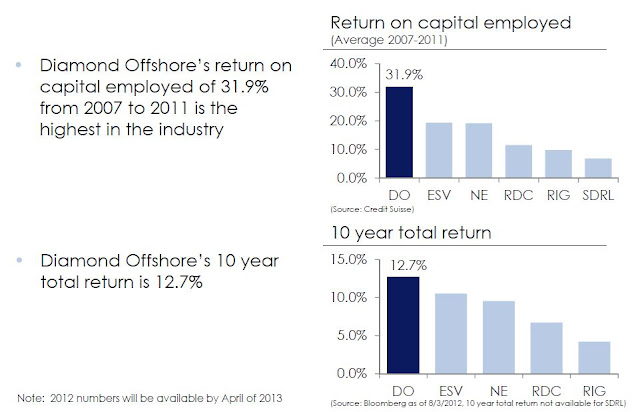 And they think that natural gas demand will rise over time: 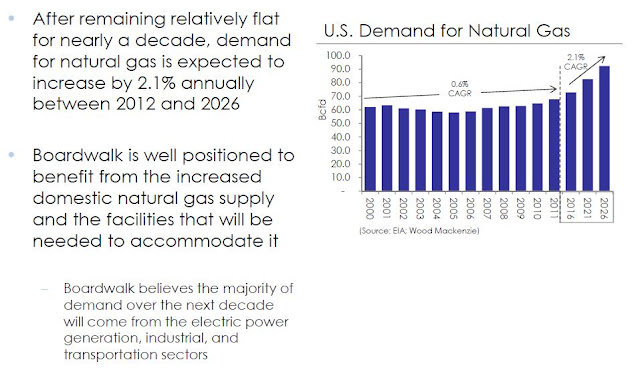 Lotta Value: Investment Hunter
And I don't know if this is desperation, but they put up on the website a comic book, oops, sorry, I meant graphic novel (this makes it OK for adults to read, I suppose) to tell the Loews value story.  I know they have been frustrated for years that L doesn't trade at or above the sum of the parts.  Tisch believes that L is worth more than the sum of the parts, and it has been frustrating for him for many years.

So this is where they go.  They turn to a comic book!  Oops, I mean graphic novel.  I suppose it's OK.  There's nothing wrong with having some fun.  But I would be shocked (and scared) if Lotta Value helped narrow the discount between stock price and intrinsic value.

I know Warren Buffett has been frustrated too with the stock price of Berkshire Hathaway, pounding the table recently in his annual reports insisting that BRK is worth far more than book value.

If Buffett did a comic book, maybe he would borrow some talent from Iger (Disney) and do a better one.   Who knows. 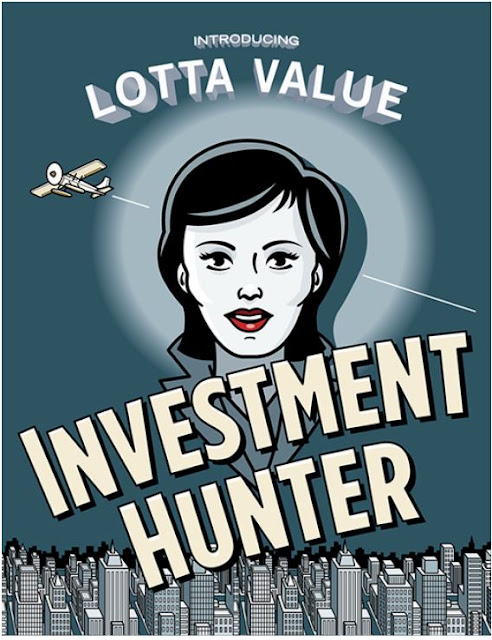 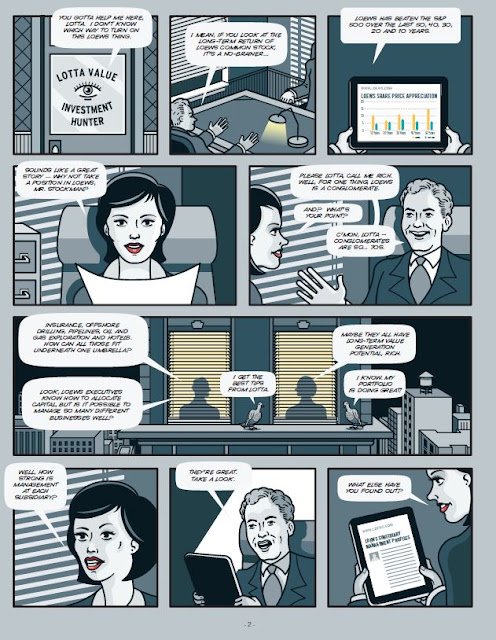 This is just the first page.  You can download the whole thing at the L website.
For people who are too lazy to even read a comic book, they did a video so you can watch that instead.

I suppose it's good that they are trying new things to get the word out and try to narrow the discount.

Conclusion
The new website is nice.  Simple and fresh, with some new stuff on there.  It would be really great if they put more meat in the history section.  I'm sure there is a lot of interesting stuff they can put there.  The new logo to me is nice even though it doesn't seem contemporary to me.  But what do I know, and why am I even talking about it?  What difference does it make to an investor?

Flipping through the annual report and company overview, I get the sense that L is really on top of things and are working hard to create value.  There does seem to be a lot of potential in their various areas of investment.  If the CNA turnaround really works and they get their combined ratios down, premiums go up and rates keep firming, there can be some real upside in the stock as CNA is still trading cheap.  Interest rates might have to go higher, though.

Diamond Offshore looks good too in the longer term as it does look harder and harder to find cheap oil and oil companies will need to keep drilling.

I'm actually surprised at how well Boardwalk is doing despite low natural gas prices and L sees a lot more growth ahead which is good.

Loews Hotels too seems to be more active.  For a long time, it seemed to me that it was just there.  They owned some nice hotels but it just didn't really do anything.  Now it seems like there is some activity going on, so we'll see how that goes.

Anyway, other parts look interesting too.  Have a look for yourself.