So I did make it to the Leucadia National (LUK) annual meeting this year.  As usual, these aren't comprehensive notes or anything like that. These are just some loose notes on certain things.   I didn't take detailed notes so some things might be a little off here and there, but I don't think I am off in the general ideas that were talked about.

This may be a first, but LUK had a slide show for this meeting.  You can see it here.  (Of course I did wonder for a second if Berkshire Hathaway will have a slide show in the post-Buffett era.)

Here is the first slide: 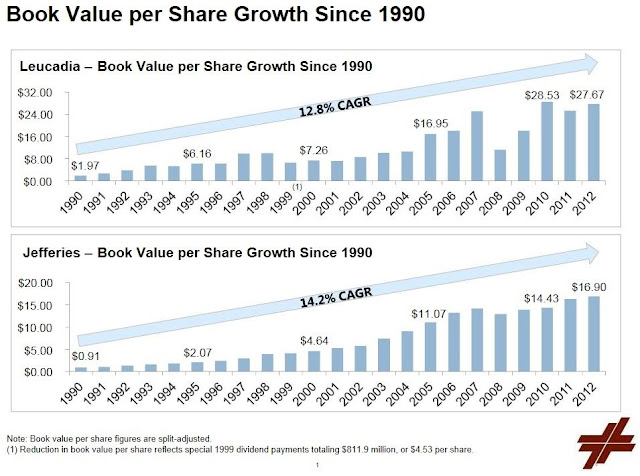 For the Berkheads that need to know, Berkshire Hathaway returned +15.7%/year from 1990 through 2012. But the JEF figures exclude dividends and the LUK figures exclude the special dividend back in 1999 (the HomeFed spinoff is also not included).

Anyway, Richard Handler did a really good job, I think, and people should feel comfortable that LUK is in good hands (even though it is now a very different entity so I totally understand people getting out now).  He talked a lot about the things he thinks are really important; act like owners, emphasis on risk management, diversification; avoid all-in bets, importance of balance sheet strength, capital structure etc.  He did say that protecting bondholders through the cycle is important for shareholders.

He said that what LUK has now is really good and he is excited about it; strong balance sheet / capital, good businesses.  This will be the basis of a lot of opportunity to create value over the next 5, 10, 15 years.

Complicated Company
Handler said that LUK is a complicated company with a lot of moving parts but what they will focus on is how to build book value per share (BPS) over time.  He thinks they will create a lot of value. 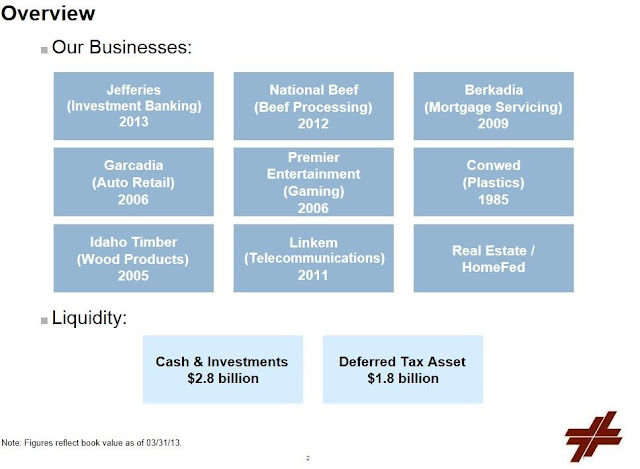 President Brian Friedman briefly went through the various business lines mostly just saying that he sees upside in all of the areas and feels good about them.  The exception seemed to be Sangart where he said we will have to see how it develops.  Not in the list above is the Oregon LNG project which Friedman says has a lot of potential, but also a lot of work to do to get it realized (regulatory issues etc.). 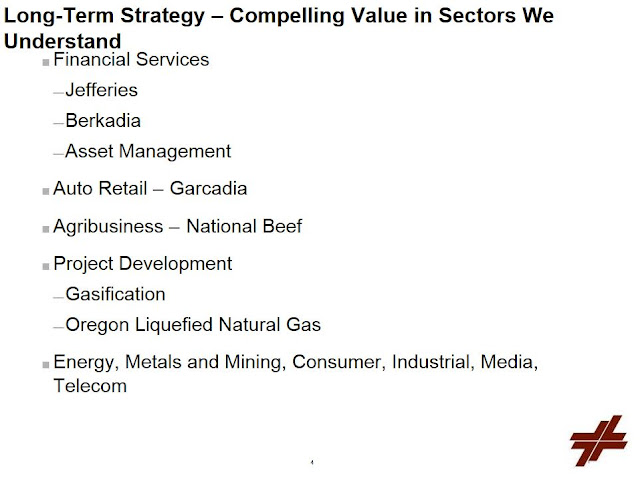 He said LUK will focus on opportunities not available to the public, not run-of-the-mill things.

In early July, LUK bought Topwater Capital, a fund of funds business.  It's small, but there is a lot of potential to build it up over time.

National Beef
Founding partner and current CEO of National Beef, Tim Klein, also made a quick presentation of his business.

The key points are that National Beef is focused on going up the value chain to improve margins.  They are also processing / selling hide to improve margins.   U.S. is now a beef exporter and demand is expected to increase over time globally (increasing demand for protein). 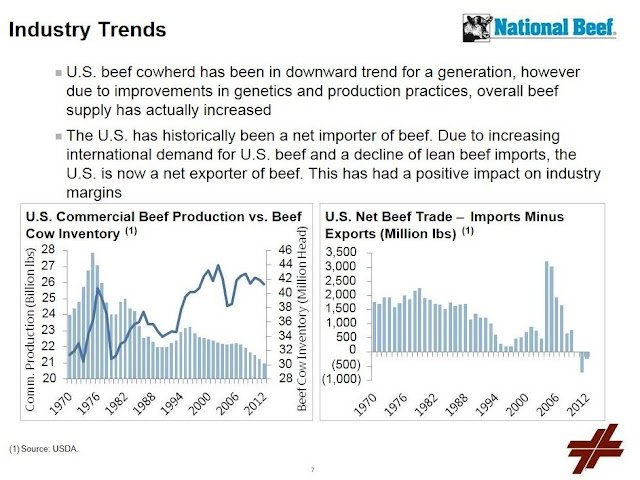 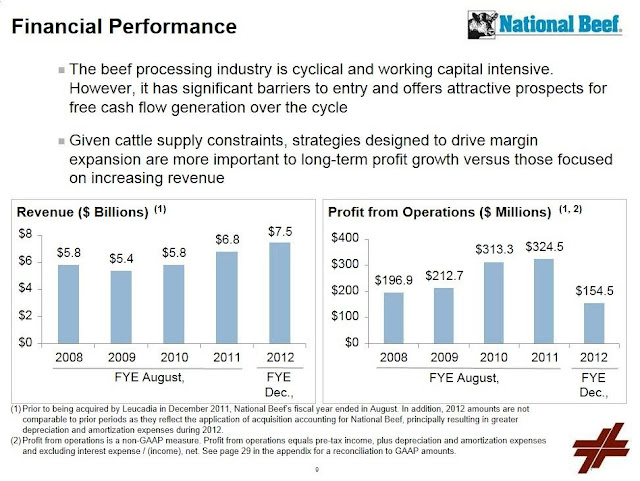 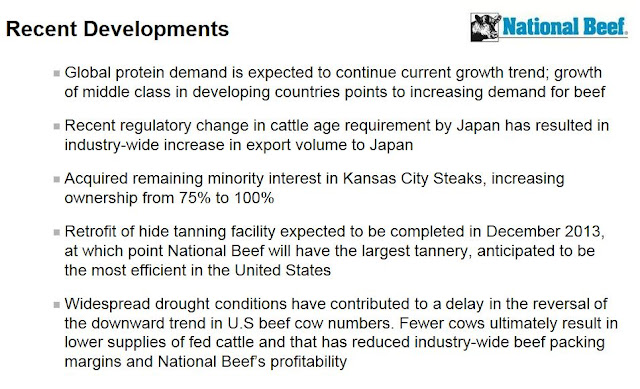 They bought the rest of Kansas City Steaks as part of their plan to go up the value chain.  I think he said that Omaha Steaks does $400 million in revenues and Kansas City Steaks does only $20 million so there is a lot of potential.   There was no mention of (nor were there questions) any sort of discount to LUK shareholders. Klein said that the problem with lower cattle supplies due to the drought is ending as ranchers are starting to build up their herds again, but it may be two or three years before we start to see that coming back into the supply chain (I assume that means that it will take that long to see increasing volumes and improving margins).

Berkadia
LUK initially invested $217 million in Berkadia and as of July 2013 $191 million has already been paid out, and there is still "substantial value" going forward.

Scale matters in this business, so there is a lot of consolidation potential to come. 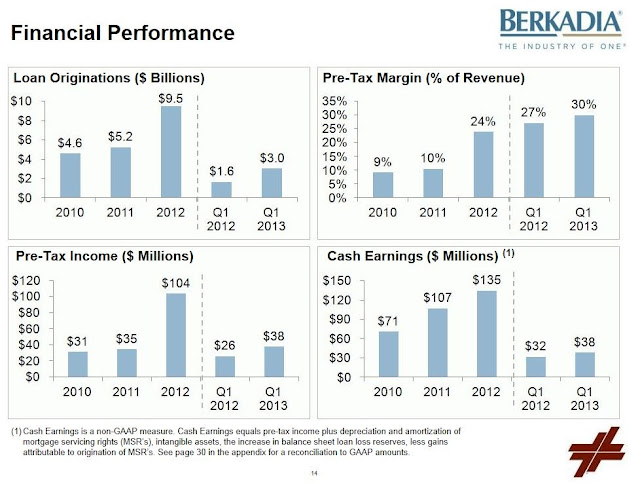 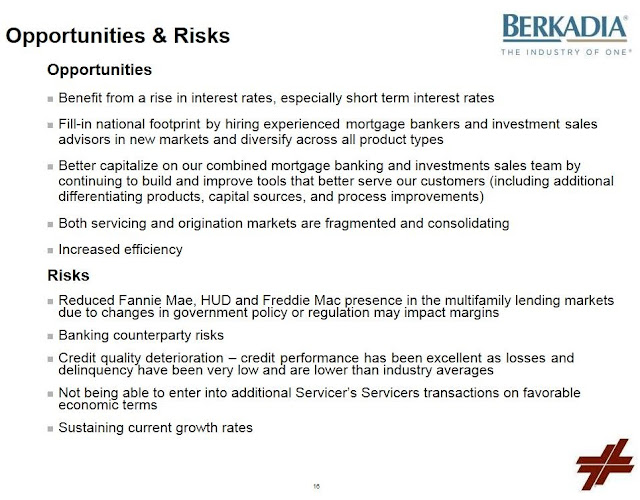 Garcadia
Garcadia is another roll-up type business where the industry is really fragmented. 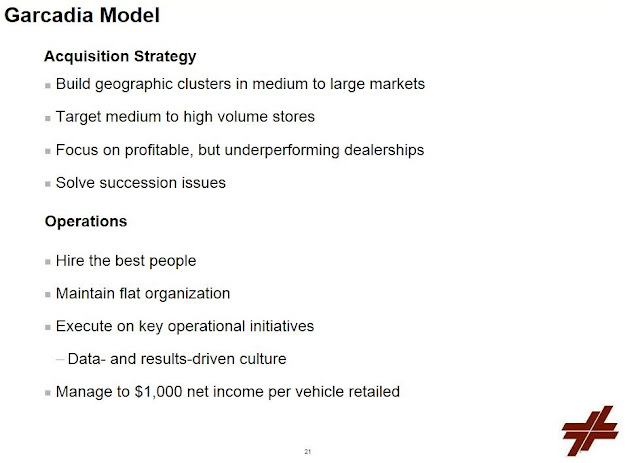 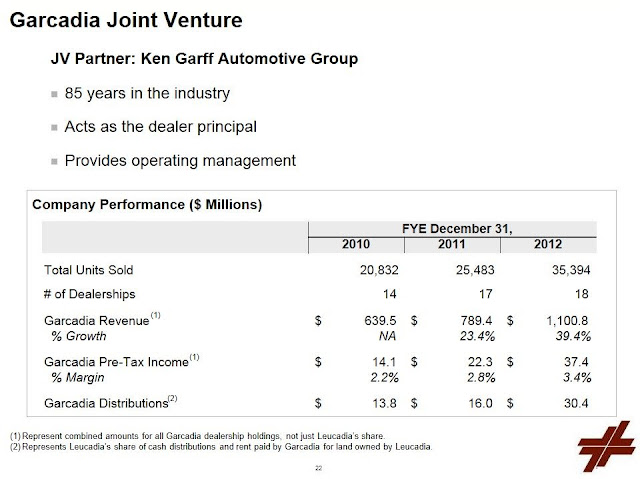 Jefferies
Jefferies has been listed for a long time so I think many people are well aware of their business.  It has grown a bunch into a full service, global investment bank since 1990 when they were primarily a cash equities business with 140 employees and $7 million in net income. Handler mentioned a number of times that they don't engage in proprietary trading and are very client focused.

My comment:  Their ROE over the years is not as good as some of the majors, but that is probably due to JEF's not getting involved with proprietary trading, derivatives, internal hedge funds etc.  So it's possible that they are not as impacted going forward by many of these new regulations.  So on that basis, JEF can be interesting to people who do worry about that sort of thing at GS, JPM etc...  But that's just a thought. 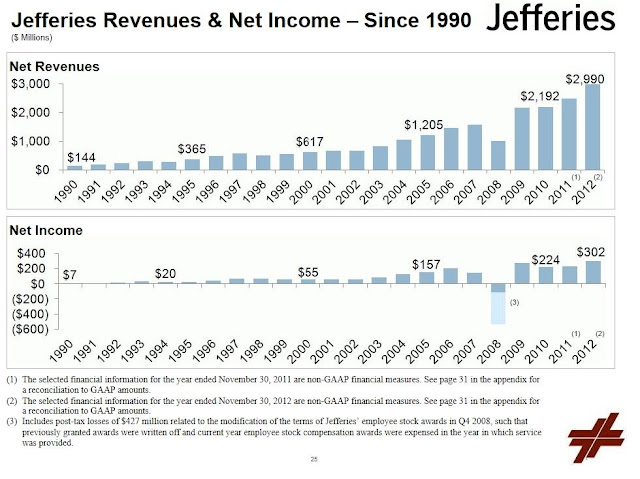 OK, so these were some of the slides and comments from the various businesses where the CEOs were present.

Q&A
Here are some Q&A's, not word for word or anything like that

Handler said that to prevent that sort of thing, they are focused on:


He said no business is 100% safe in any business, but if they stay focused on doing the right things, they can minimize the risk.

Earnings Power of JEF in a Good Year?
Handler says that the world keeps changing so it would be misleading if he said what JEF can make in a good year.   He said they aim to make low-to-mid teens returns through the cycle (I assume that's ROE, which is consistent with JEF's past).

Sangart Update?
This question was tossed to Steinberg who simply said, "It's on life support".   Handler said that it's been written down so the there is upside, not downside (my comment: well, they can keep losing money in which case that would still be downside; just because a problem is not on the balance sheet doesn't mean it can't bleed us through the income statement).


National Beef
My mind was wandering but I think there was a question regarding Walmart and National Beef.  I just remember some comments about that being a low margin business and the risks of having such a big part of the business with one customer.  I don't know if Klein made it sound like "good riddance", but Handler later stated that even if it's low margin they would have liked to keep the business.

Compensation Ratio at JEF
There was a question regarding the compensation ratio at JEF due to JEF going private.  What are the implications of that (private versus public company).  Handler said it has nothing to do with it.  But he says the comp ratio in the high 50s will come down as that was pushed up by a lot of hiring in the past three years (due to the opportunity).  The hiring has peaked so compensation expensed due to that will start to come down.  Also, as revenues rise, operating leverage should kick in bringing down the comp ratio.

Rising Interest Rates
Someone pointed out that JEF's competitors had a good quarter and JEF was not so great. Handler responded by saying that the volatility in the fixed income markets helps competitors' fixed income derivatives business.  In this environment, that business is like a license to print money.  JEF doesn't have that business, but then they didn't have it four years ago and it blew up some competitors back then.

Monetize or Hold LUK Investments?
They like the businesses they own; good businesses, scalable and throwing off cash.  There are benefits also to the various businesses in terms of idea generation (more eyes on the ground).  Can't say what LUK will look like in the future.  They will just be smart and avoid mistakes.

National Beef
Someone compared National Beef to Smithfield.  Smithfield is two times bigger (revenues and EBITDA)  than National Beef, but the Chinese are paying 4x as much.   Is National Beef worth more?  Klein said that the beef industry always tended to trade at lower multiples than pork.

How Does Handler / Friedman Allocate Time Between LUK and JEF?
Handler pointed out that the various businesses have their own CEOs (and on the JEF side, I guess division heads) and other operating managers that do their job well.  Handler said that it feels like he spends 60% / 60% between the two.  So I take that to mean he splits his time 50/50 between the two.

What is a "Dumb" Thing?
Someone asked, what exactly is a "dumb" thing?  Handler keeps talking about avoiding doing "dumb" things, but mistakes are obvious usually in hindsight.  So what exactly constitutes "dumb"?

Handler said he has been in the business a very long time and has seen very smart people do very stupid things.  He talked about how a great company levered up 35-to-1 and drove itself off a cliff.  Illiquid products that nobody can value has caused trouble.  Bad emails (referring to the Fabulous Fab trial going on at the time).  Avoid arrogance, thinking that you can't make a mistake.  Always have humility and excess capital.

Share Repurchases
Berkshire Hathaway has a 1.2x BPS repurchase policy.  What is Handler's view on buybacks?  Have they done any?

Handler said they bought some JEF stock back at the time of the merger.  Post merger, they have a 25 million share authority.   They will be opportunistic on share repurchases.

Does Book Value Approximate Intrinsic Value?
Handler said "that's your decision, not mine".

Who Makes Decision on Non-financial Acquisitions?
The questioner said something about how LUK built a team and Steinberg said that he never thought of it that way, but they have a great team.  On acquisitions, the board will make the decision.   The questioner probably wanted to know who is going to drive the process when an idea comes up; will it be Handler, Friedman, Steinberg?  I would guess they would all discuss it together so no one person is going to make the call.  They then present it to the board etc...

How Does Steinberg Manage His Time?
Someone asked about his new role, and how he will be spending his time; does he come to work every day? After talking about new office arrangements and some moves (Justin Wheeler moving to NYC etc...), he just said, "We're having fun".

Bank Deals
Someone asked about a small bank deal that JEF was involved in recently.  Is this a trend? Will they see more bank deals?  Friedman said that JEF had a good market share in that sector this week (or last week). This is not driven by Dodd-Frank, but more from capital requirements.  JEF has been waiting for a wave of deals here, but it hasn't really happened, but it will eventually.  The biggest barrier to the deal flow in this area is 'cultural'.  People don't want to give up their CEO-ship.


I don't know if that was the last question, but that's the last thing in my notebook.

I think Handler and Friedman were really good and reasonable and do seem to share the same sort of values as Cumming/Steinberg.   I personally don't have any problem with Handler/Friedman.  I do understand that many in the value investing community are just totally allergic to investment banks.  There is nothing I can really say to those folks.  If they don't like investment banks and bankers, well, then they should just avoid them.   That's totally fine.

But this is not the old LUK either.

Email ThisBlogThis!Share to TwitterShare to FacebookShare to Pinterest
Labels: LUK