So I can't believe it's been more than a month since my last post.  This was not an intended leave or anything like that, time just flew by.  Preparing for the summer, going away and things like that.

Anyway, I do intend to keep posting here regularly.  Hopefully I don't have a gap of an entire month too often.

A lot of things are going on now and there are a lot of things to look at and talk about, but for now I just thought I'd look at Yahoo!, or more specifically, the Alibaba Group.

In the earnings release, there was a new slide that I didn't see before which includes the earnings of Alibaba Group.  These figures have always been disclosed in the 10-Q and 10-K's, but I don't remember seeing it in the earnings slides.

It would seem a little odd that something that has been known and disclosed for a long time suddenly gets noticed because it's on a colorful slide.

Anyway, let's take a look at it: 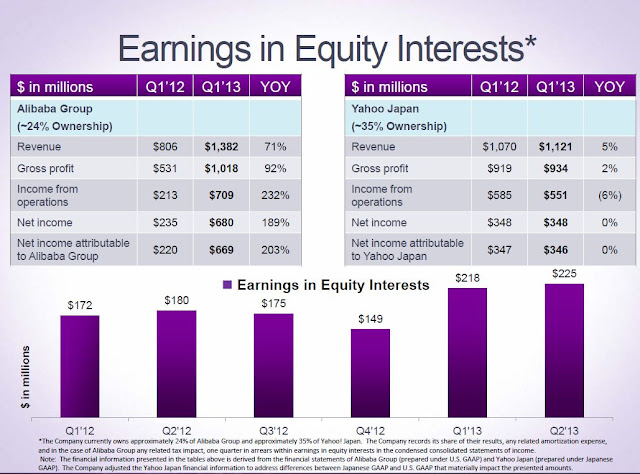 Let's just zoom up on the relevant table on the left: 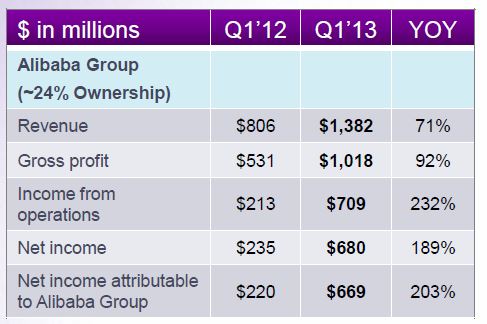 So, we know that Alibaba Group is doing extremely well.  We all knew that, of course, but it's now even more known.  It's interesting that analysts are now rushing to up their value of Yahoo! based on an increased valuation for Alibaba Group.  I suppose the market/analysts are responding to what looks like some serious operating leverage kicking in (well, it kicked in last quarter too but people didn't seem to get this worked up about it).  Hopefully, that's real operating leverage (that is sustainable).

Anyway, so let's take a look at this thing.  I posted a couple of years ago how some thought that Alibaba Group was worth $32 billion, and last September YHOO sold some shares back to Alibaba Group validating valuations in the $30-40 billion range.

Since then, people have been talking about $100 billion for the valuation of Alibaba Group, and today I think some are saying it's worth $120 billion.

I really don't have any idea how these things are supposed to be valued, but I decided to take a closer look to see if I can get some sort of feel for it.

Alibaba Revenues and Earnings Trend
First of all, here is the trend of Alibaba Group's revenues, operating earnings and net profit (attributable to Alibaba Group):

So this is remarkable.  Revenues have been growing consistently around 70%/year and it has turned profitable since 2011.

Let's take a closer look at this on a quarterly basis: 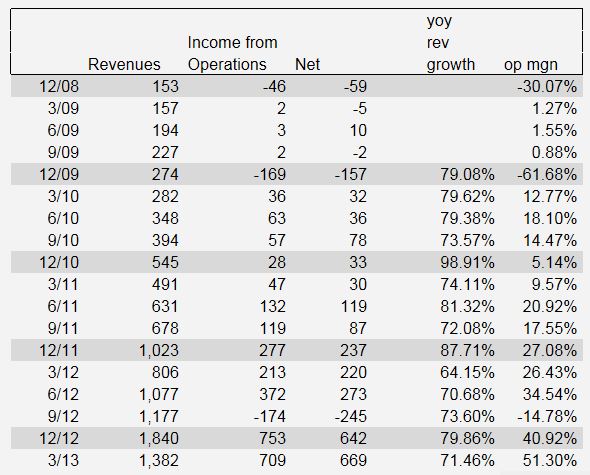 This is pretty impressive for sure, and you can see why the market is responding to this.  Operating margin is up to over 50%.  We don't have details on Alibaba's financials, so it's hard to say where margins will be over time.  But if they keep growing revenues like they have been and keep margins in the 30%-50% area, this can be a huge market cap company for sure, no doubt about that.  With real earnings, this is no longer just a pipe dream, dot-com.

This is not so safe to do without knowing more details, but if you annualize the first quarter 2013 (ended March 2013) earnings figure that comes to $2.7 billion.  If you value Alibaba at $40 billion, a figure tossed around not too long ago, that would be less than 15x earnings annualized current earnings, which of course is ludicrous for a profitable business growing revenues at 70%+/year.

Taking this $2.7 billion figure, Alibaba would be worth $54 billion at 20x p/e.  20x would still be way too cheap.  OK, instead of looking at it like this, let's make a table out of this.

The value is before any taxes that would have to be paid on a sale.   When Facebook came out, it came out at something like 100x earnings and 27x revenues.  At 100x p/e, Alibaba could be worth $270 billion, or $65 per Yahoo share, which is nonsense.

First of all, I am using a figure annualizing the 1Q net income figure which is not always a good idea.  But on the other hand, this doesn't take into account the 70% revenue growth through the rest of the year.  If they continue to grow revenues and maintain or improve margins, then annualizing the 1Q figure would be too low.  There may have been factors that pushed up margins in the 1Q that may not recur.

But anyway, even taking a valuation like 40-50x, which would seem reasonable (not that a value investor would pay that price!) for someone growing revenues so quickly, this would value Yahoo's stake (pretax) at $26-32/share.

YHOO has agreed to sell half of their existing stake in the IPO, so it seems the longer that takes, the more value YHOO can get.

This is really sloppy analysis, but if we push this out a year and assume revenues keep growing at 70% and margins stay up here at 50%, you can just push up the above valuation figures another 70%.  The potential is just insane.

China Crash
One problem that people seem worried about now is the China meltdown.  One thing to keep in mind is that during the financial crisis, companies like Google, Facebook, Amazon and others kept growing and did just fine; they are in growing businesses taking share away from the old economy so the biggest financial crisis / near depression was barely noticeable in their financial statements through the crisis.

In that sense, Alibaba Group exposure may not necessarily carry the same risk as other China-themed investments.

Conclusion
I really don't have any idea if Alibaba will keep growing at +70%/year, or whether 40-50% operating margins are sustainable.  And I didn't intend to fine-tune intrinsic value of YHOO; I just wanted to see what all the hullabaloo was about and in this case, there does seem to be something there.

I have no idea what the proper valuation for Alibaba is, but from the above table, I actually don't think a $100+ billion market cap is a stretch for Alibaba.

I do still own YHOO, primarily for the reason I stated in previous posts (sum-of-the-parts valuation), although I have lightened up as YHOO rallied a bunch.  But it's amazing how much value is being created here in Alibaba.

Do I have a view on Marissa Mayer?  Not really.  She does seem supersmart and well-liked.  It's really good that morale is up which is really important for companies.  But whether or not she can turn around YHOO is a tough question.  I have no idea.  I lean towards being optimistic and do think she has a chance, but it's a tough, fast-changing industry.  She certainly seems to be more qualified to run YHOO than other recent CEO's (who were not Silicon Valley 'geeks'.  Bartz was a tech industry executive, but from another era and didn't seem to have the hacker cred that seems so important)

Anyway, YHOO is certainly still very interesting and I will continue to watch this.  After looking at this data in this form, I almost wish YHOO wasn't in a rush to monetize some of these assets.  Imagine what Alibaba could be worth in a another couple of years.  But then again, who knows when things turn.

Email ThisBlogThis!Share to TwitterShare to FacebookShare to Pinterest
Labels: YHOO