So David Winters is upset about the "biggest transfer of wealth from shareholders to management" in history.  According to Winters Coke's (KO) new 2014 Equity Plan may cause 14.2% dilution to shareholders over the next four years.

His calculation is that there are 4.4 billion shares outstanding so 14.2% of that is 625 million shares, and at $38/share, that's $24 billion of wealth that will be transferred directly from shareholders to management.

Of course this is ludicrous.  How can this much wealth transfer occur in a company like Coke?

Expected Value Transfer and Dilution
The Compensation Committee and the Board also considered the expected shareowner value transfer and potential dilution that would result by adopting the 2014 Plan, including the policies of certain institutional investors and major proxy advisory firms. Potential dilution is calculated as shown below:

The problem with this comment is that much of this dilution is going to occur via stock options (in terms of number of shares), and a grant of stock options is not a direct transfer of wealth of the entire underlying amount to the employee who receives it.  For example, if the stock is trading at $38 and an option is offered at a $38 exercise price, the cost to KO (which is expensed) would be around $3.8/share granted, not the entire $38/share.

But if the KO stock price goes up over the next five years and the option is exercised, KO will "sell" stock cheap and then buy it back (repurchase) high.  Assuming the stock price goes up 8%/year, which is the EPS growth target (so is a reasonable estimate of stock price appreciation over the long term), then it may actually end up costing KO $18/share.  Some will say the true cost of the option, then, is the difference between the exercise price and the market price at the time of exercise.  Never mind if that's right or not for now.

The 2014 Equity Plan is based on historic trends in equity grants.  They are just reloading the gun, so the 500 million shares doesn't really mean anything in terms of year-to-year grants.

For real dilution or wealth transfer effects, maybe it's better to just look at the historic burn rate for KO which is disclosed here in the proxy:

Historical Equity Award Granting Practices
In setting and recommending to shareowners the number of shares authorized under the 2014 Plan, the Compensation Committee and the Board considered the historical number of equity awards granted under the Prior Plans in the past two full years and the annual equity awards made in February 2014. In 2012, 2013 and year to date through February 20, 2014, the Company used approximately 60 million, 63 million and 73 million, respectively, of the shares authorized under the Prior Plans to make equity awards.

The Compensation Committee and the Board also considered the Company’s three-year average burn rate (2011-2013) of approximately 1.3%, which is lower than the industry thresholds established by certain major proxy advisory firms.

Based on historical granting practices and the recent trading price of the Common Stock, the 2014 Plan is expected to cover awards for approximately four years.

The burn rate is 1.3% for the three-years 2011-2013.  That is very far from a 14.2% dilution over four years that Winters talks about.  The 14.2% includes options already granted and are outstanding from previous years.

By the way, check this out from Goldman Sachs' equity compensation presentation of 2013: 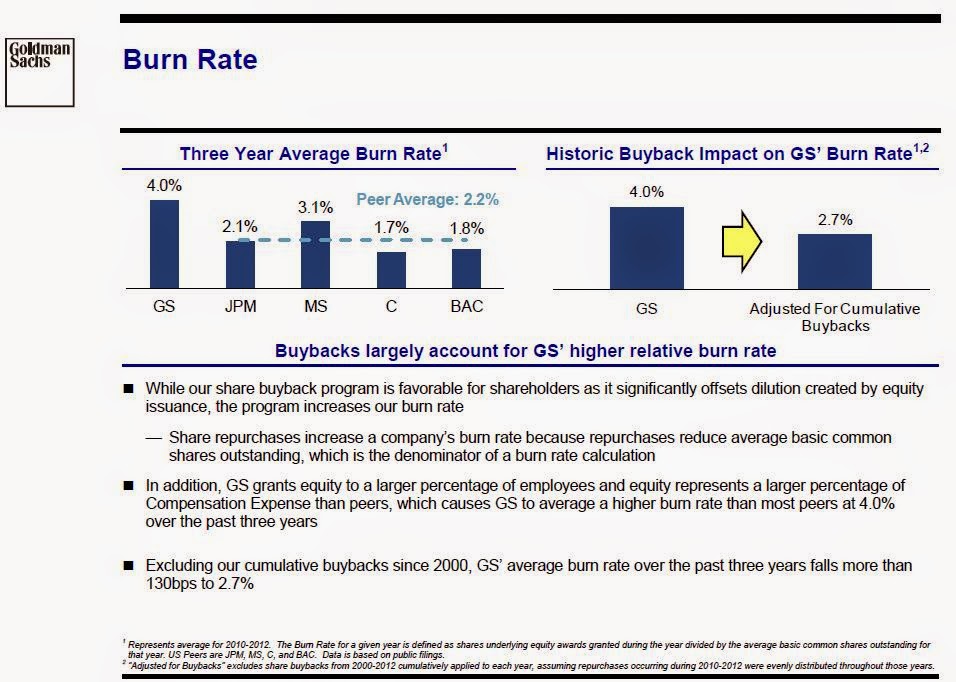 Of course, it's not a good idea to bring in GS and other banks to defend KO; I can imagine the outcry of some folks (who think bankers are even more overpaid).  But Buffett is a large shareholder of GS and is well aware of this.  I also don't mind this stuff too much at financial firms as I tend to look at BPS growth over time, and all of this is reflected in shareholders' equity.   For example, if JPM has a high looking burn rate of 2.1% but has grown BPS in double digits, that's fine with me.

OK, back to KO.  KO's burn rate is 1.3%.  I don't know that there is anything in the proxy that indicates that the burn rate will be any higher going forward.

We may conclude that the burn rate might rise to 1.5%/year.  But I don't know if that conclusion is correct. Setting up the plan and granting things from year to year are not the same thing; maybe they want to have enough shares to grant just in case.  I just took the 60 million, 63 million and 73 million and averaged them and then divided by 4.4 billion shares (actually, shares outstanding was 4.6 billion in 2012).

So using a 1.5% burn rate (and for simplicity let's just assume it is mostly options granted) and 8%/year increase in stock price over five years, that's 0.75% actual 'cost':  8%/year would make the stock price go up around 50% in five years, so at-the-money options granted will eventually be worth 50% of the stock price.  1.5% of outstanding shares in options are granted every year so that's 0.75% in total cost.  But since KO gets to deduct the difference between the exercise price and market price (at time of option exercise) for tax purposes, the after tax cost would be around 0.5%/year.

Accounting treatment now is that the cost of stock options is expensed using an option model but the difference between exercise price and market value at the time of option exercise, although tax deductible, does not show up on the income statement as an expense but does show up in a reduction in shareholders' equity (so is a "wealth transfer" from shareholders to employees).

We can see what the actual cost was in the recent three years by looking at the 2013 10-K:

There are 302 million options outstanding already.  Someone might see this as an $11 billion transfer of wealth, but you can see that the instrinsic value of the options is $3.6 billion (as of the end of 2013).  If all options outstanding were exercised at once and KO repurchased shares in the market to offset it (at the year-end price), it would cost KO $3.6 billion, and after tax $2.3 billion.  That's against a current market cap of $167 billion, or 1.4%.  That's a 1.4% transfer of wealth from KO shareholders to employees.

The above excludes full value awards, but since those are expensed one-for-one and the number of shares are a lot lower than those represented by options, I tend not to think that it's that much of an issue.

Conclusion
I understand the frustration with excessive executive compensation, but I really don't think this sort of hyperbole is productive.  To call this equity plan a $24 billion transfer of wealth is very misleading.   Speaking of hyperbole, the recent "market is rigged" comment seems like that too, which may be another post.

I know there have been issues in the past about the treatment of stock options.  I don't have a strong view on that (other than that is should be expensed) and that's really not the point of this post.

David Winters is a BRK-holding value investor and I have a high degree of respect for him but I sort of wish he didn't resort to this kind of soundbite-ism.  I know that's the way of the world now; people won't pay attention unless you can get the message out in 140 character or less or in four words ("the market is rigged"), and that's very unfortunate.

Email ThisBlogThis!Share to TwitterShare to FacebookShare to Pinterest
Labels: KO