So the JPMorgan Chase (JPM) annual report is out.  After the Berkshire Hathaway report, this is my favorite read of the year.  I say "annual report", but I actually just mean "letter to shareholders".

Anyway, here are some comments as usual.  This is not meant to be a comprehensive summary or anything close to that; I will just comment on what comes to mind.  So I would highly recommend reading the whole letter; reading this post is no substitute!  It is definitely worth your time even if you don't have any interest in investing in JPM.  Read it here.

Earnings
More on earnings later, but Dimon points out that excluding the legal expense and some gains on asset sales and some benefits from reserve releases (which he has never considered "real" earnings), JPM earned $23 billion in 2013 versus the reported $17.9 billion.   Deducting preferred dividends and other stuff that go between net income and net to common, that leaves $22.5 billion net to common for an adjusted EPS of $5.94/share. With the stock at $57.40, JPM is currently trading at 9.7x p/e.   That is cheap for such a high quality company.  I understand that people think JPM has a lot of risk (derivatives, is a money center bank subject to many new regulations that will hold them back etc.), but still.  That's cheap.

Dimon makes some comments about growth initiatives and normalization of interest rates, so we'll look at earnings again a little later.  But just hold these figures in your head for a moment.

Performance Over Time
So here's the usual stuff.  Tangible book value per share has grown +12%/year between 2005-2013.  As I always say, that's pretty amazing when you think about what has happened over the past eight years; Great Recession, Whale trade etc.  If you said back in 2005 that JPM will grow tangible BPS +12%/year over the next eight years, people would have laughed at you.  They would have told you that with that huge derivatives book (and credit cards, mortgages exposure), one speed-bump in the economy and *poof*, JPM will be gone. If you said that tangible BPS would grow +10.9%/year over the next six years in 2007 or +12.6%/year over the next five years in 2008, they would have laughed even harder.

Here is a look at the stock price and book value performance since Dimon took over Bank One (and since the merger): 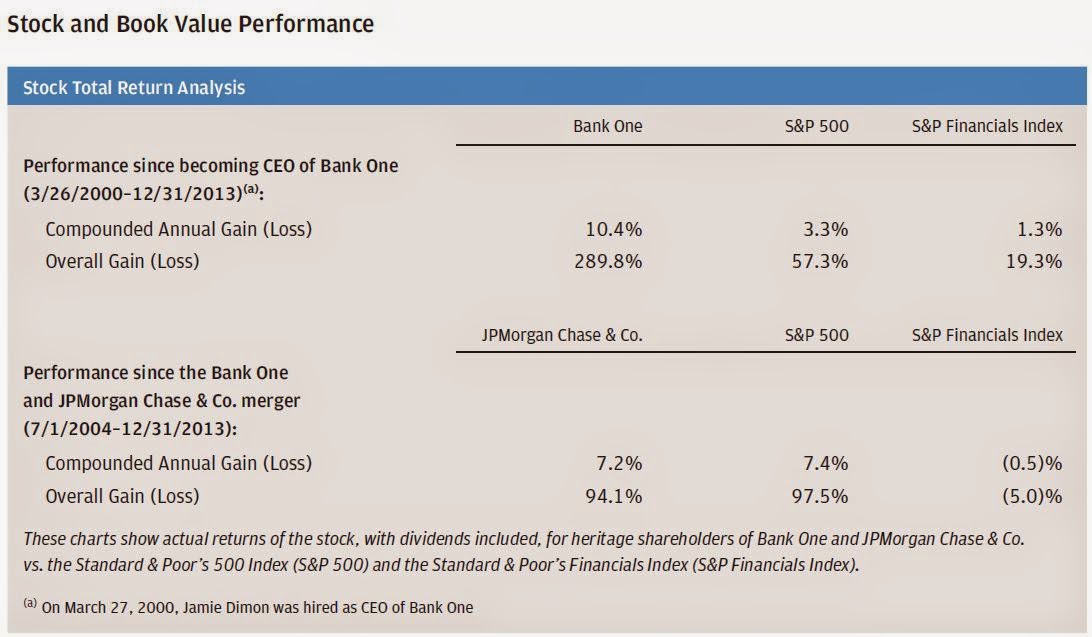 But on a tangible book value basis JPM has outperformed the S&P 500 index in both periods: 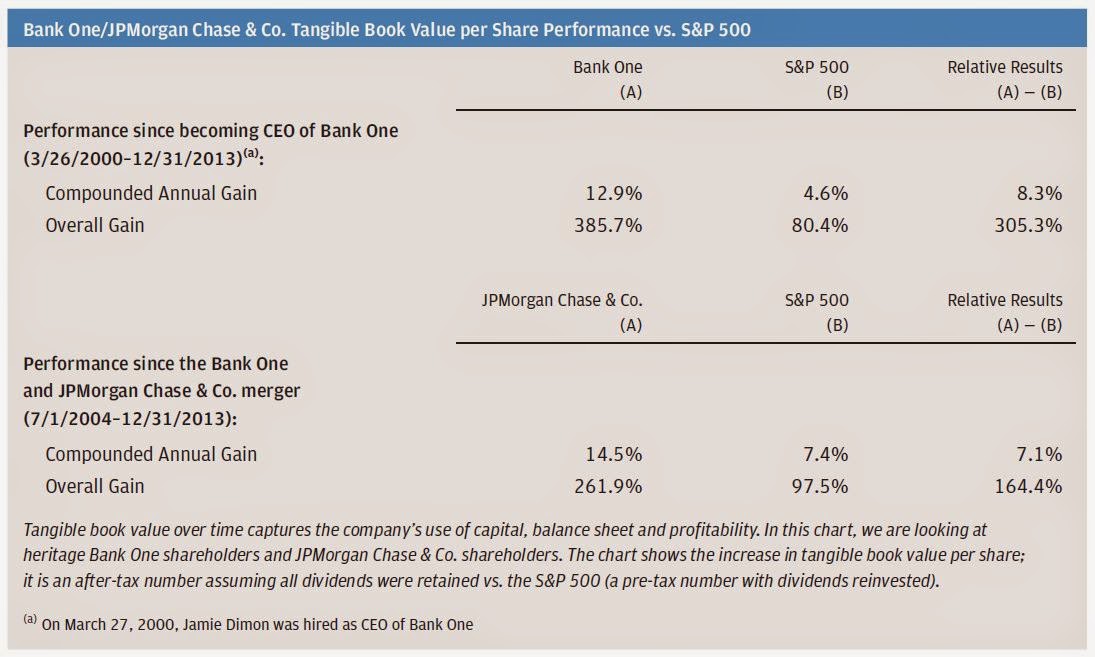 And all of this has been achieved with higher capital ratios: 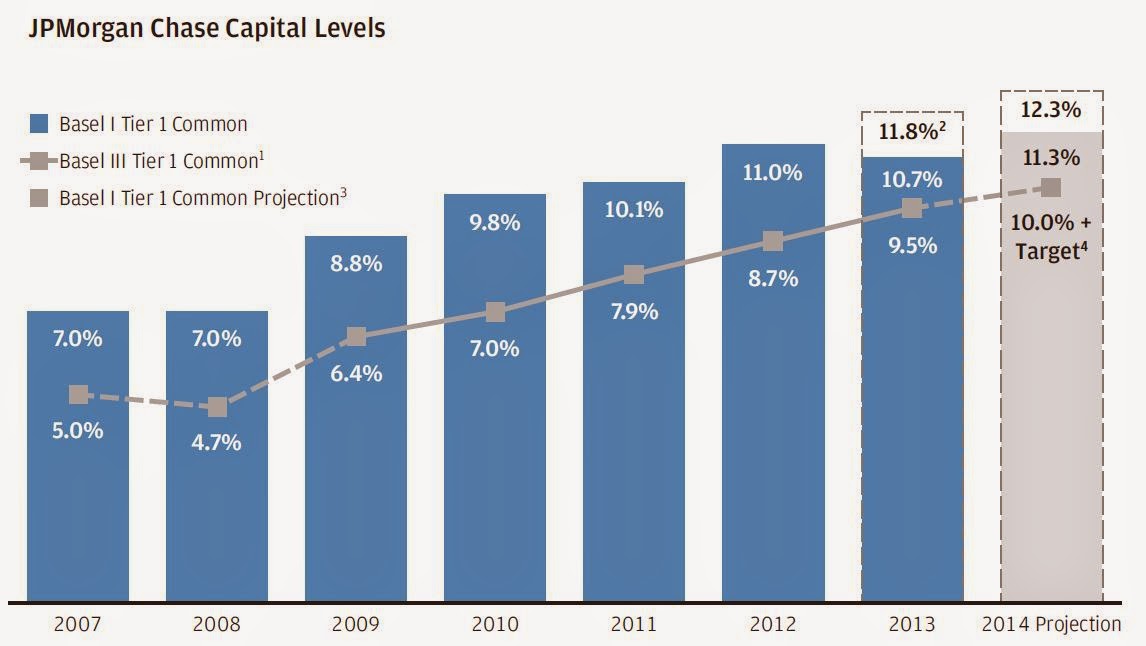 And the high returns on equity are across the various business lines: 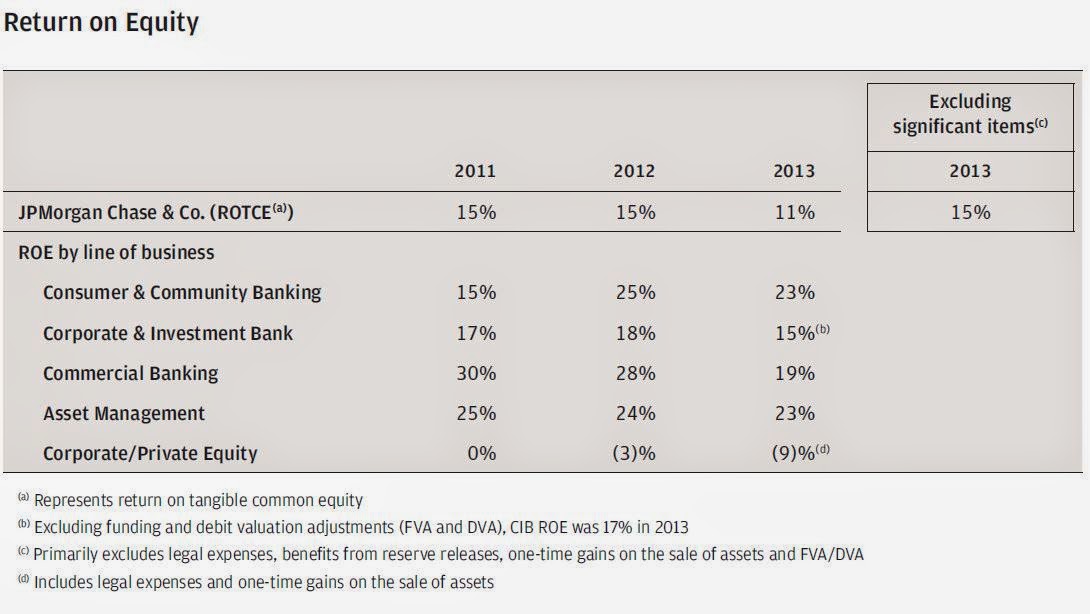 So let's take a look at this.  ROE is pretty stable at 15% or so (on a tangible equity basis) while capital ratios are going up.

Check this out for a second:

For 2013, I used the figure excluding the legal charge, one time gains etc.  For all other years, it is as reported in the annual reports.  So even as capital ratios creep higher, ROTCE remains constant.  The peak was in 2007, the height of the bubble.  2006 ROTCE was 20%.

But wait a minute!  2006/2007 was the height of the bubble so may be on the high side of normal.  Plus, we know that the abnormally low interest rates now are holding down earnings at the banks.  More on this later, but Dimon did say that normalizing of interest rates can improve after-tax profits by $6 billion.  Of course, this will not happen in a straight line or overnight.  It may take three to five years. But just for the sake of comparing ROTCE under the higher capital standards, let's say that interest rates were 'normal' last year.

Tangible common equity averaged $149 billion last year, and $6 billion is 4% of that.  So if yield curves were normal, they would have earned 19% ROTCE last year.   Another way to look at it is to say that the drop in ROTCE from 21% to 15% was more driven by abnormally low interest rates than higher capital ratios.   Of course, higher capital ratios dampen ROTCE, but that can be and has been managed around.

And think about it, this is 19% ROTCE with the current subdued environment; this only accounts for a normalized interest rate environment and adjusts for the legal cost (and one-time gains) of 2013.  Imagine the potential if housing really picks up, capital investment picks up etc.

Also, this is just a simple, static look at this; if the yield curve was different last year, other things would have been different too so this is way too simple, but it is interesting nonetheless.   Actually, if higher rates are driven by a stronger economy, then this analysis might be good and even conservative (as loans and business volume would increase).

Lower Returns Due to Higher Capital Standards?
OK, so we sort of looked at this above, but Dimon addresses this issue going forward in the letter: 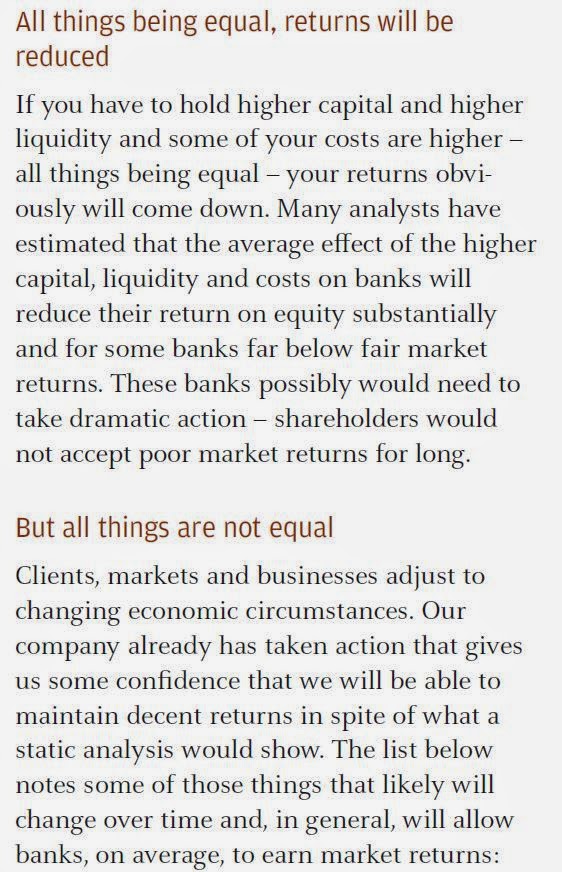 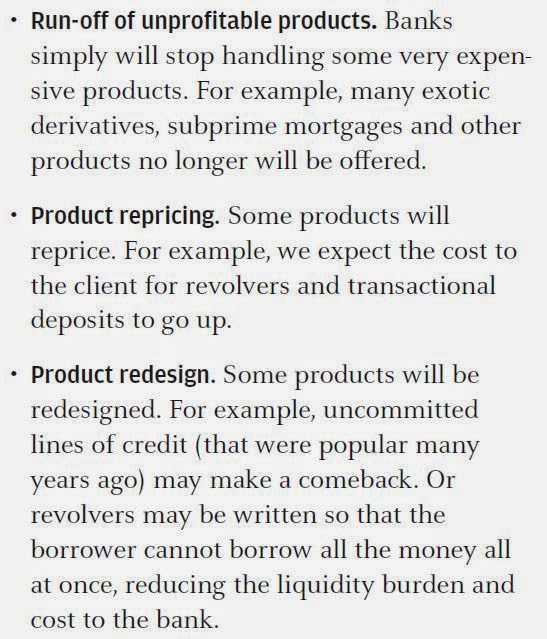 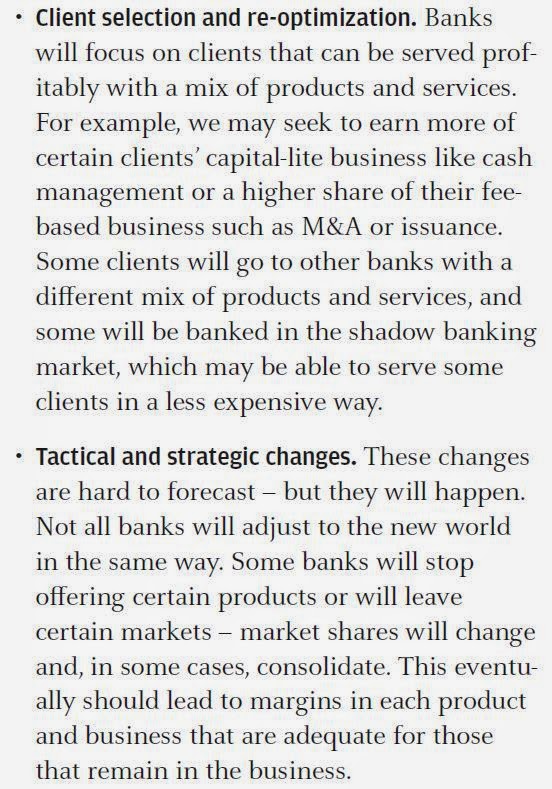 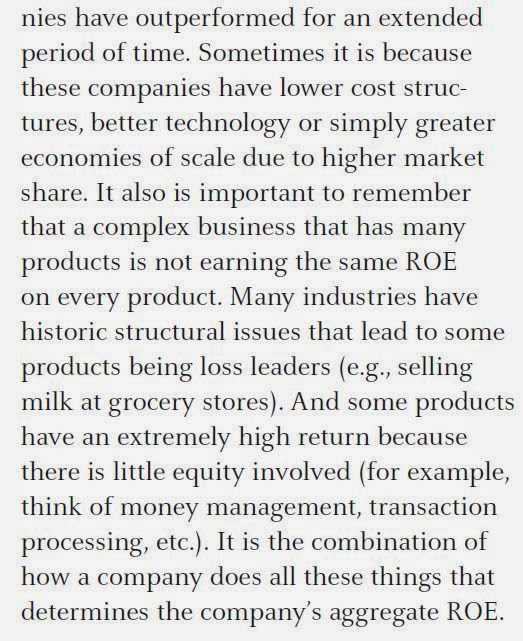 Lower Return Guidance?
And to summarize all of this, Dimon said he has usually guided a 16% through-the-cycle ROTCE but lowered that to a figure somewhere between 15-16%:


In the past, we told you we would expect our average return on tangible equity through the cycle (by this, we mean in average times with normalized credit losses) to be 16%.  With higher levels of capital, significant regulatory changes and some remaining uncertainties, we moved the number to be somewhere between 15% and 16%.

This is not a huge adjustment given the complexity of issues involved.

Also, here is the table of businesses that they are eliminating and the financial impact: 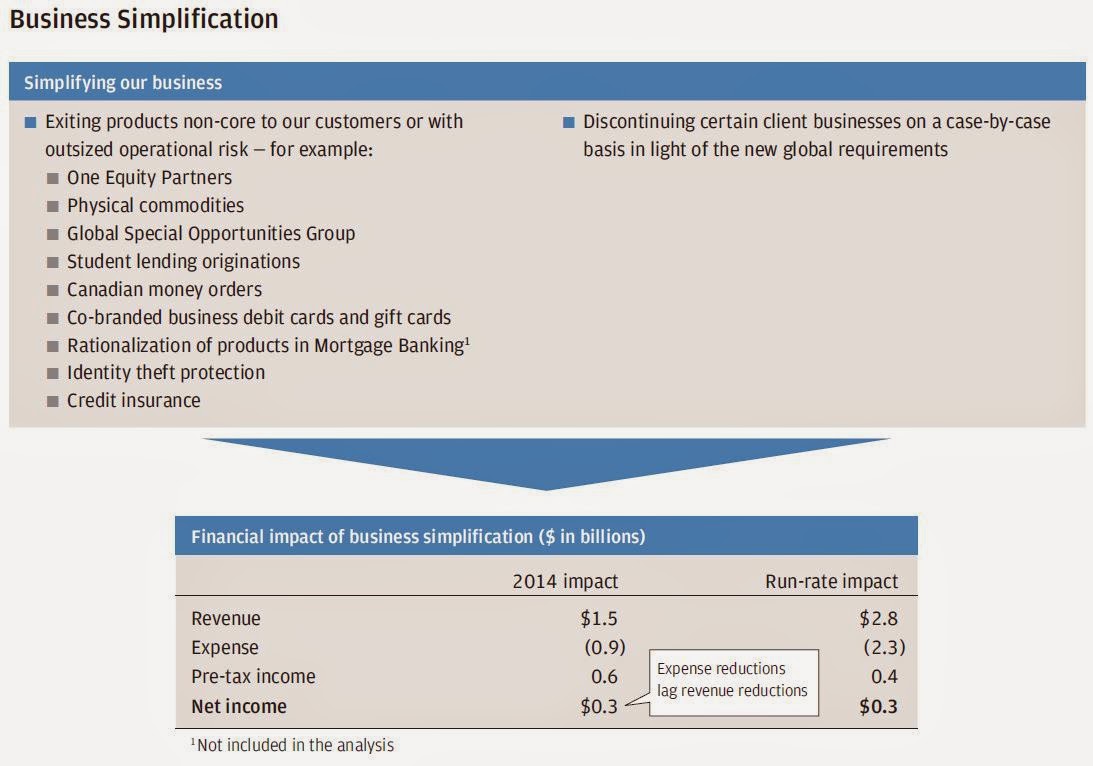 Earnings Over Time
Other than this 15-16% ROTCE range, he said that current investment initiatives ongoing will add $3.5 billion or so in net earnings to the 2017 run-rate, and normalized interest rates may add $6 billion after-tax by increasing net interest margins by 2.2-2.7%.  He sees short rates at 3-4% and 10 year treasury rate of 5% as normal.  This may happen over three to five years and not in a straight line.  Also, the $6 billion figure, he cautions, is an "all else equal" number but we all know that all is never equal.

But just for fun, let's tack this on to the 2013 adjusted earnings of $23 billion.  So adding the $3.5 billion and $6 billion from the above, that's $32.5 billion.   And deducting $525 million of stuff that goes to other than common shareholders (preferred dividends etc), that leaves around $32 billion.   With 3.8 billion shares outstanding, that's $8.42/share in EPS.   As Dimon said on investor day, the $3.5 billion from ongoing investments doesn't incorporate business growth over time; that's just the earnings that will come directly from the growth initiatives/investments.

Anyway, this is just playing around with some numbers, not projections or forecasts; just some numbers to think about.

Other things Dimon talks about are:

Scale and breadth create large cross-sell opportunities and strong competitive advantage
Presumably addressing regulators and potential activist investors, Dimon makes the case for why JPM works with the various business units together.  Don't break us up! He says there is $15 billion in additional revenues due to the businesses being together.

Some of the interesting economic things are:
He talks about some of the positives and negatives in the current environment, and he mentions the things that might be holding things back:

Also, Dimon says uncertainty and hypersensitivity to risk is holding us back.  He says,

It seems that just about everyone has become a risk expert and sees risk behind every rock.  They don't want to miss it - like they did in 2008.  They want to be able to say, "I told you so."  And, therefore, they identify everything as risky.


Taper Fears
The Fed balance sheet went from $1 trillion to $4.5 trillion.  It has been buying $85 billion a month in treasuries and recently scaled that back to $55 billion.  This is expected to go to zero by the end of the year.

Dimon points out that the value of all financial assets in the U.S. is $90 trillion, and when the Fed stops buying treasuries, the balance sheet will run off to $2 trillion by 2020 just from paydowns of principal.   The Fed won't have to take the balance sheet down to $1 trillion.    He says that even if the Fed needed to sell some securities, the economy should be able to handle it easily, especially in a stronger economy.

He has no doubt QE worked because it lowered long-term interest rates, but he also points out that a lot of QE remains "unused".  QE essentially replaced $3 trillion in treasuries held by the public with cash reserves created by the Fed.  If this cash is deposited in a bank and the bank deposits this cash at the Fed, there would be no economic effect.

The fear is that this unused money will suddenly flow into the economy causing inflation, but Dimon points out that the Fed can reverse this if needed, and that banks are more constrained in lending now due to liquidity and capital requirements.

So anyway, as usual, it's a really good letter.  There is a lot of stuff other than what I mention in there, so you should definitely go read it.