Alleghany (Y) also just published their annual report for 2014.  As usual, it's a really good read.

A long time ago, Dorothy Boyd said to Jerry McGuire, "You had me at 'hello'".

Well, Alleghany had me with this:

And since Buffett mentions a "through-the-cycle" performance figure to offset the S&P 500's crisis low point advantage in the five year performance figure, I did the same for Y.  Y narrowly beats the S&P 500 index on that basis.  That's not bad at all, actually, when you see how conservatively they have been managed.

Here is a chart from the annual report: 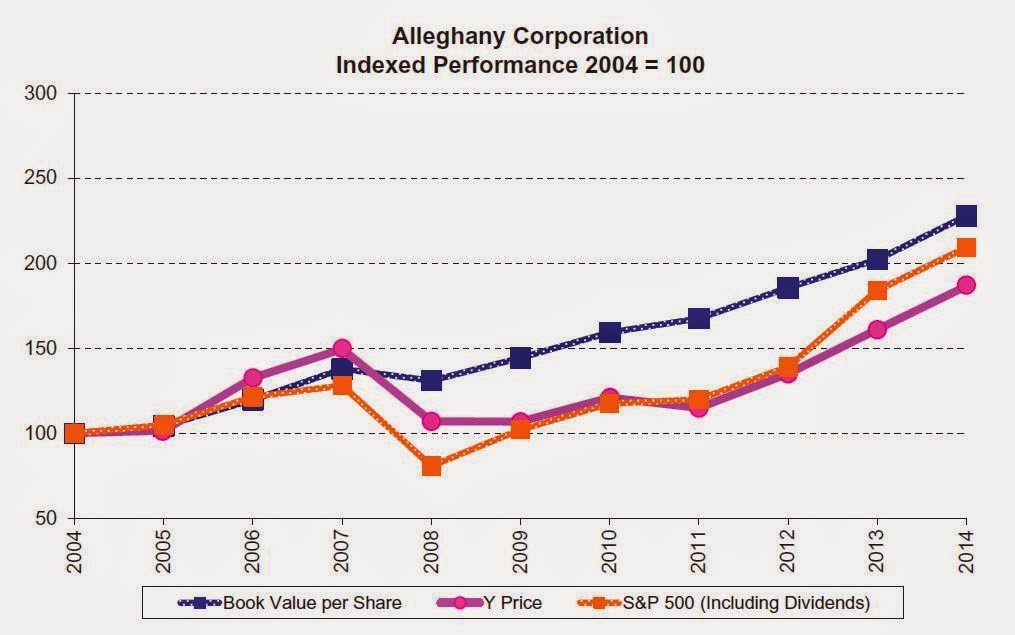 And then there was an interesting paragraph in the letter that raised my eyebrows.  I know investment managers (including Buffett) have been struggling with beating the S&P 500 index recently.  I notice that even many of the well-known value investors have been underperforming.

But this paragraph was kind of interesting:


The S&P 500 is a challenging benchmark because it is not a static population of companies.  Losers are kicked out of the index, and vibrant, growing companies are added.  It also represents America's leading companies, including a number of companies that dominate their industries.  By contrast, the New York Stock Exchange Composite index is more representative of the average company.  In 2014, the NYSE Composite returned 6.9%, and has returned about 6.9% a year over the past decade.

Honestly, I've never really looked at the S&P 500 that way, but I suppose it's true.  It isn't a static population of companies.  And yes, it's true that losers are kicked out and then "vibrant, growing companies" are added.  And yes, it also represents "America's leading companies, including a number of companies that dominate their industries."

In some sense, isn't that sort of what you want in a portfolio?  Is this why Buffett so likes to recommend people just buy an S&P 500 index fund?  (And if the S&P 500 is filled with leading, vibrant, dominant companies and the NYSE Composite are just average companies, how about going long the S&P 500 index and shorting the NYSE Composite?!  Long the excellent, short the average!).

McGraw Hill Greatest Fund Manager on the Planet!
So, wait a second.  The S&P 500 index is actively managed (as described above) and everyone has trouble beating them.  Doesn't that make the S&P 500 index committee the best portfolio managers around?  There is more than $1.25 trillion of assets directly tied to the index.  If they are that good and can outperform everyone else, surely they can charge 1.0% management fee.  That's $12.5 billion in management fees right there.  Assuming they can get a 50% operating margin (which should not be a problem with that kind of revenues and a single index committee) that's $6.3 billion in operating income, and then put a 10x multiple on that and it's suddenly a $63 billion business right there inside a $27 billion market cap company!

But, alas, it's not so simple as we'll see in a second.


NYSE Composite
Since the S&P 500 index is an actively managed index of great, vibrant companies, Y suggests looking at the NYSE Composite as "more representative of the average company".

But I don't know if the NYSE Composite is a good benchmark.  First of all, the NYSE Composite includes all common stocks (tracking stocks and REITs too, I think) listed on the NYSE.  That includes a lot of ADR's, which are foreign companies.  If you want to include foreign companies, there are better benchmarks.  The ADRs represent a skewed group of foreign stocks because it would only include companies who have ADRs listed on the NYSE.

Also, choosing companies only listed on the NYSE would skew the population as some of the best managed companies are not traded there (Apple, Google etc...).

Looking at this, it seems like the Russell indices are a lot closer to the S&P 500 index.  This is probably because it includes the many NASDAQ-listed companies.  Also, the NYSE Composite was probably dragged down in recent years due to the lagging foreign ADRs; we know Europe and emerging markets are in the gutter these days.

The Russell indices also add "vibrant, growing companies" and drop losers, but it is done mechanically.  The NYSE also drops losers too (delisting) and they do add companies by lobbying companies to join the NYSE.  So none of these indices are really static populations.

As you see, the Russell 1000 tracks the S&P 500 index very closely.  This is obviously why the S&P index committee would never get 1.0% fees on assets tracking the index.

More Detailed ROE
Here's a look at how the ROE breaks down:

Ares Management, L.P. (ARES)
Y bought a stake in ARES back in 2013.  This deal makes sense in that Y needs expertise in managing their fixed income portfolio.  It was mentioned in the letter:

Anyway, it's an interesting idea.

Insurance Stuff
The insurance businesses have been doing really well, but a lot of that is that there haven't been a lot of events recently.

Here are some interesting comments on the business, though:

This is the sort of conservatism that I like in Y.

And here's an interesting commentary on the insurance business and deflation: 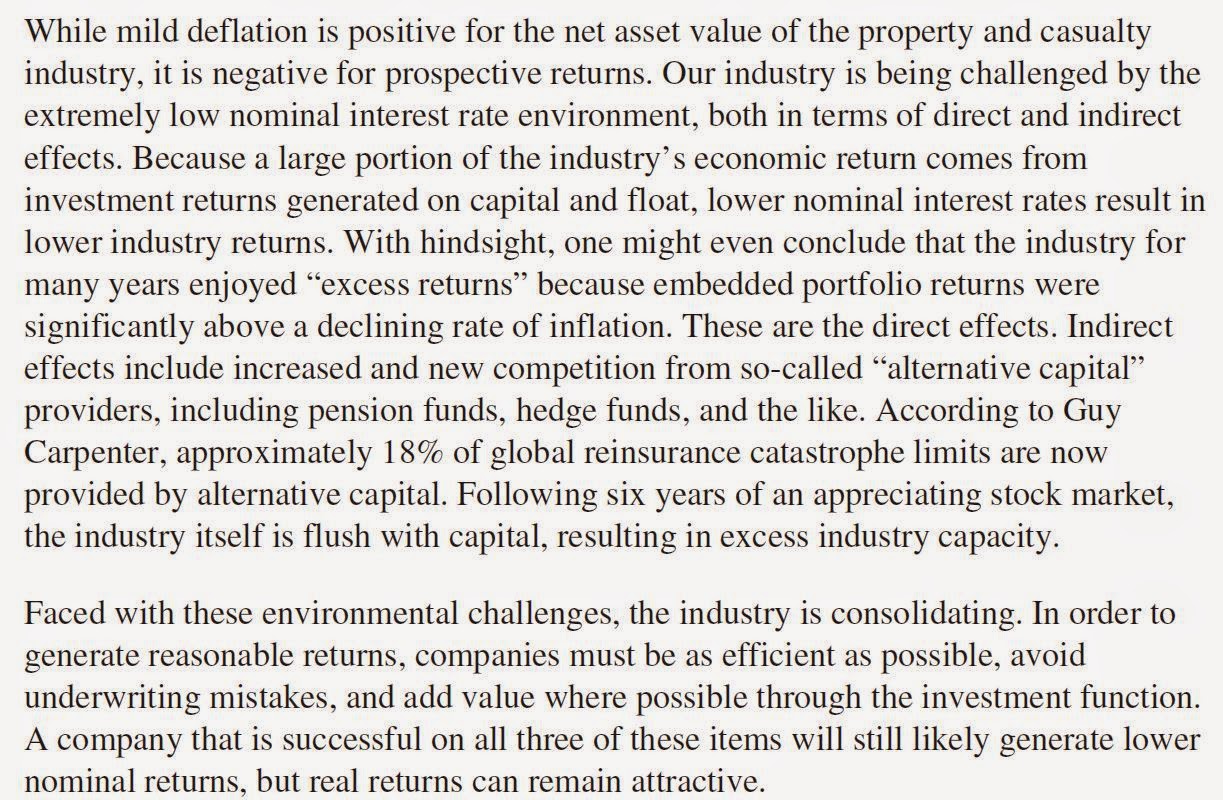 Investments
The equity portfolio at Y didn't do too well; 5.6% vs. 13.7% for the S&P 500 index.  They have a new manager running the portfolio and it's still a little early so I wouldn't give too much weight to a single year performance.  We'll see how it performs over time.

There is a lot of commentary of the current environment; the usual cautious stuff about QE etc.

And then there is an analysis of what's going on in the energy markets.  Here's the conclusion:

I didn't really think about it this way, that the peak was in 2008.   Maybe that is correct and the latest collapse is just a part of the extended bear market in crude oil.   If that is the case, then maybe a turn is a little closer than thinking about the collapse last year as the beginning of something.

They too see sustainable prices in the $70-80/barrel range.

Long Term Performance Target
There was a comment in the outlook section of the letter that made me scratch my head a little bit.  Look:

It says that Y increased BPS at almost 9%/year over the past decade, "at the upper end of our stated objective of 7-10% annual growth over the long-term."

But that makes it sound like their goal was 7-10% growth in BPS since 2004.  I only remember seeing this 7-10% goal recently, so I went back to the old letters to see.


2004 AR:  "Our long-term goal is to increase our stockholders' equity per share at double-digit rates, but only if we can do so without taking excessive risk."

This continued for another year or so, and maybe there was a year where it wasn't mentioned at all, but the next time a goal was mentioned was during the crisis:


2008 AR:  "Alleghany's goal is to compound its book value per share at attractive rates over a long period of time. "

This was obviously due to the fact that Y wasn't growing BPS at double digit rates at that point.


2011 AR: "Our goal is to increase book value per share at a rate of growth that exceeds the total return on the S&P 500 over time. We believe that book value per share growth of 7-10% per year will achieve this goal, and that there is a good chance that our current portfolio of insurance, reinsurance, private capital and public equity investments will allow us to achieve these results over time.  Importantly, our business model calls for market-beating book value growth with a low risk profile."

I may be wrong about this; I just quickly looked through the old annual reports.

It's not a big deal, but I thought it was a little misleading.  It's only because I've been reading the reports for a long time that it made me think, hey, wait a minute.

It's still a decent performance over time and I still like Y.  I do think they are well-managed.  And again, this sort of performance given their conservatism is pretty good (read the letters; some will describe them not as conservative but extremely pessimistic, especially compared to Buffett's letter!).

Conclusion
I always enjoy reading the Y annual report.  I think it's run by great people and like it a lot.  It's a little conservative for my taste, but look, they are beating or at least keeping up with the S&P 500 index without taking a lot of risk.

They are also investing in private businesses, like BRK and MKL.  It's interesting that MKL and Y are both taking a similar approach, breaking out their investments into private businesses; disclosing EBITDA of them etc.

It's definitely an interesting situation at 1.0x BPS.