So the long awaited annual report came out last weekend.   As usual, I thought it was a great report.  For most Berk-heads, though, it's mostly the usual same old, same old.   There was one big difference, though, this year.  Buffett changed the performance page of the letter to include change in the stock price of Berkshire Hathaway.  This is the way Leucadia reported their performance during the Cumming/Steinberg era; they had a column for both book value per share and stock price.   I wish others like Loews would do it like this too (but using total returns of the S&P 500 index instead of just the price change).

In last year's letter, he said that things are good as long as BRK's BPS outperforms the S&P 500 index through the cycle.  This was in response to questions with respect to underperforming over a rolling five year period.

The five year return still lags, but again, that's largely due to the S&P 500 index coming off of a low point during the crisis.

The main reason Buffett included the stock price on the front page of the annual report is that due to the ever-growing operating businesses (as opposed to the stock portfolio), book value of BRK is increasingly understating intrinsic value.

To direct shareholders to a more accurate measure of intrinsic value, he has been guiding towards looking at the two main components of BRK's value; the investments per share and pretax profits per share of the operating businesses.

I don't want to get too involved in the valuation of BRK here as that would be another lengthy post (or series of posts); I just wanted to see the difference in BPS and a valuation based on the two-column valuation method.

BPS Growth versus Intrinsic Value Growth
In the 2014 annual report, there is an update of a table he put in a previous one.  It's the investments per share and pretax profit per share of BRK over time.  From 1970-2010, he shows the figures for every 10 years, which is fine.  We don't need too much detail for what I am going to look at.

For the period between 2010 and 2014, I pulled the figures from each annual report as he has included the most recent figures in every report since 2010.

Again, I don't want to get into what the right multiple is to value the operating businesses, but for simplicity I just used 10x pretax earnings.  10x pretax is what Buffett said he would pay for businesses with similar quality/characteristics to what BRK already owns.  And we know he wants to pay a fair price for a wonderful business, and not a wonderful price for a fair business.  So I guess 10x pretax earnings is a fair price (and not a bargain basement price).

In any case, you will see that it won't matter much what multiple I use for this analysis; the direction is what interests me.

Anyway, in the table below, I put the investments per share and pretax profit per share in the two left columns.  This is right out of the annual reports so should be correct.

For the value of operating businesses, I use a multiple of 10x.

For total intrinsic value of BRK (Total IV), I just added investments per share and the value of the operating businesses.

The column after that, "Op biz % total IV" is the value of the operating businesses as a percentage of total IV of BRK.

BPS is just BPS as reported by Buffett, and the following columns in gray are annualized changes in the respective items (S&P is total return).

BPS is used as a proxy for intrinsic value and it has been a decent one over long time periods.

However, his view is that recently, the operating businesses has become a bigger part of BRK so BPS is an increasingly less accurate indicator of BRK's IV (understates it by a large amount).

So the first thing I did was look at how much the operating businesses are as a percentage of BRK's total IV.

And the lower half of the table from 2011 through 2014 are just year-over-year changes.

Here is a table that shows the same as the above, but with comparisons versus the S&P 500 index (total return) in bold: 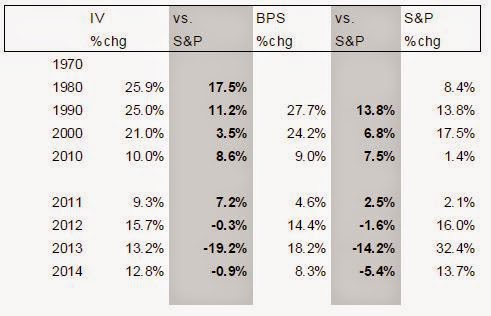 It looks like even using the IV growth instead of BPS, BRK underperformed in three of the last four years.  But again, the S&P has been roaring back from financial crisis lows, so this is not representative of any four year period by any means.

Moving the Target
Of course, this will lead to people bickering about how Buffett moved the goal post after the fact.  Well, I don't care about that.  We know how well BRK is doing and we understand why Buffett changed the front page so it doesn't matter what other people say.  Who cares, really.


All Glass House
And by the way, Buffett was on CNBC the other day, and he really ripped into David Winters of the Wintergreen Fund.   Winters criticized the Coke compensation plan and I wrote about how his analysis was just plain wrong.  Buffett agreed that the plan was too much, but didn't want to endorse the figure Winters was throwing around as being totally wrong and misleading.  And then Winters started getting personal with Buffett, even going so far as selling his BRK stock saying that if he can't stand up for shareholders in the KO situation, how can he trust Buffett to run BRK?

I thought that made no sense whatsoever.

Anyway, Buffett said that Winters criticized Coke, but said that Winters has underperformed in every time period (including since inception) and charges 150 basis points (when you can get into an index fund for 17 bps)  in fees so he is throwing rocks from an "all glass house".   He said you are paying a high price for negative value creation.

Here are Wintergreen's returns from the 2014 annual report:

Total expenses are 1.85% and 1.63% (for Investor class and Institutional Class respectively) which sounds pretty high in this day and age.  If we are looking at 5-7% returns in equities going forward, these expenses are 30% of expected gross returns!

Apparently, you can get airtime any time by criticizing Buffett (the other surefire way is to call for a stock market crash), but I guess one should be careful and think hard about whether you really want Buffett to take a close look at you.

Optimistic as Usual
Back to the report.  As usual, Buffett is very optimistic:

And it occurred to me that BRK keeps doing really well despite it's size even compared to the other Berk-a-likes.  Many of them, to me, seem far too pessimistic and conservative.  And that may have hurt their results over time.

And yes, we are in a raging bull market now so of course optimists will look better than less optimistic people.  Things will surely look different when the cycle turns and things head down.

But Buffett has sort of always been this way and he has been tested in down markets, including in the financial crisis.  His optimism didn't put BRK at risk of permanent impairment in any area.  That's the difference.  Optimistic traders can get killed pretty quickly (due to the leverage they incur).  But if you run a rock-solid, Gibraltar-like operation like BRK, optimism pays.

Buffett seems to me to like the guy that has his seatbelt fastened and does a smooth 60 or 70 mph down the highway, and traders that get in and out are like people going 120 mph on a highway without their seatbelts fastened thinking that when they see trouble ahead, they'll have plenty of time to put their seatbelts on before impact.  Otherwise they sit at a rest stop waiting for 100% clarity (which never happens anyway).

Investment Advice
And as usual in recent reports, Buffett gives advice on investing.

It's amazing to think that the dollar has declined 87% since 1965.  A lot of the stock market bears have mentioned the declining dollar as a major part of their bear thesis.  I've been hearing that sort of talk since the beginning of my career; the dollar is going to go down so you should own gold, land, houses, land bank stocks, Japanese stocks, Chinese stocks, emerging market stocks, frontier market stocks, any foreign stocks, commodity funds, commodity-linked ETFs etc... on and on...

And yet one of the best investments during that time has been U.S. stocks. 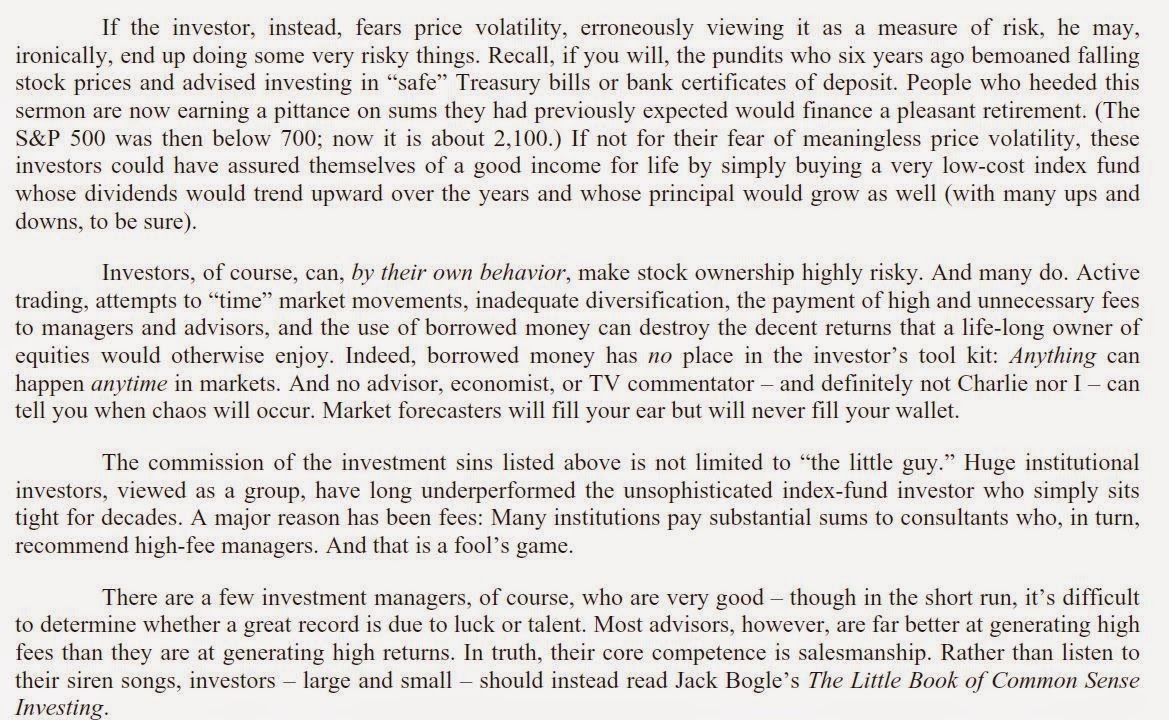 Having been in the business for a long time, I can tell you that yes, a lot of the errors and losses in the financial markets are due to people trying to avoid the perceived risk of the stock market (while trying to earn stock-market-like returns).  So much money is burned by trying to avoid "temporary" mark-downs.

Of course, the financial industry loves this.  There is more options and futures to trade, more swaps, more funds to sell etc.

There was a story recently about some janitor or something that never made more than $17,000/year or some such, who just passed away and donated $40 million.  Every now and then we hear these stories.  None of these people are highly trained geniuses like Buffett.  They just sat on stocks for a long time and didn't fudge with the portfolio.

I don't know if I mentioned this before on this blog, but one day a long time ago, a co-worker whispered to me that he was a millionaire.  And he was a low-level clerk that never made a high salary or bonus.  He never made six digits in any single year (up to that time).  And yet he was a millionaire (and no, he wasn't 80 years old or anything like that).  But he just really underspent and never sold any stock he bought.  Once he bought something, he never sold it.  Of course, this causes some to go to zero.  But so what?  Sometimes you lose less letting some stocks go to zero than buying and selling all the time trying to avoid the occasional zero.

Berkshire - Past, Present and Future
Both Buffett and Munger wrote about BRK's 50 year history.  They are great reads.  I'm not going to write anything about it here; just go and read it yourself.

We always wish Buffett would write a book, but he sort of has. If you look at all of his annual letters (including the partnership years), he has written way more than a book.  And Buffett's review and outlook for BRK is a great addition to the real time "book" he has been writing since the 1950's.

Oh yeah, and I almost forgot.  One thing he said in his 50 year essay on BRK; he did sort of give a valuation hint on BRK:

I have been of the school that BRK shouldn't trade at historical average P/B ratio due to it's increasing size and lower prospective returns, but Buffett's argument that BPS is less and less relevant as the operating businesses become a bigger part of BRK is a valid one.  But that's a whole other discussion so maybe for another time.

Conclusion
The annual report is a great read!  Go and read it if you haven't already.  Or go read it again.