The 2014 JPM annual report was finally released last week and it's a great read as usual.   Dimon takes his time to talk about the goods and the bads, industry trends, competitive threats and all kinds of things.  It's one of those letters (like Buffett's) that you learn about all sorts of things reading it, not just about the company.

Anyway, here are the usual charts showing JPM's performance in the recent past.  Nothing new here, of course. 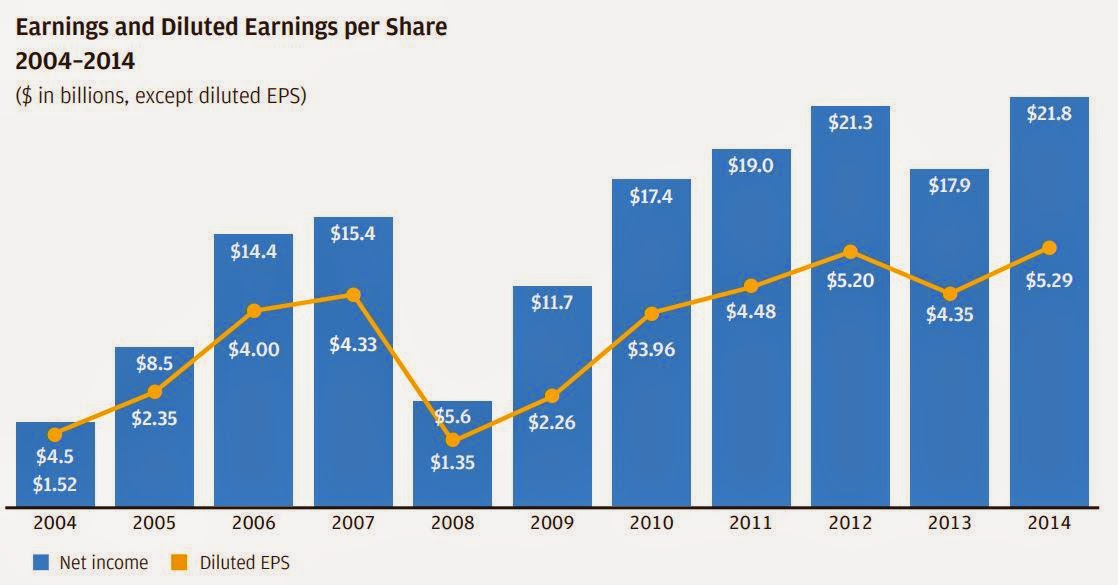 And my favorite chart is the tangible BPS growth over the past ten years:

And here are some long term performance metrics that show how Dimon has performed as a CEO: 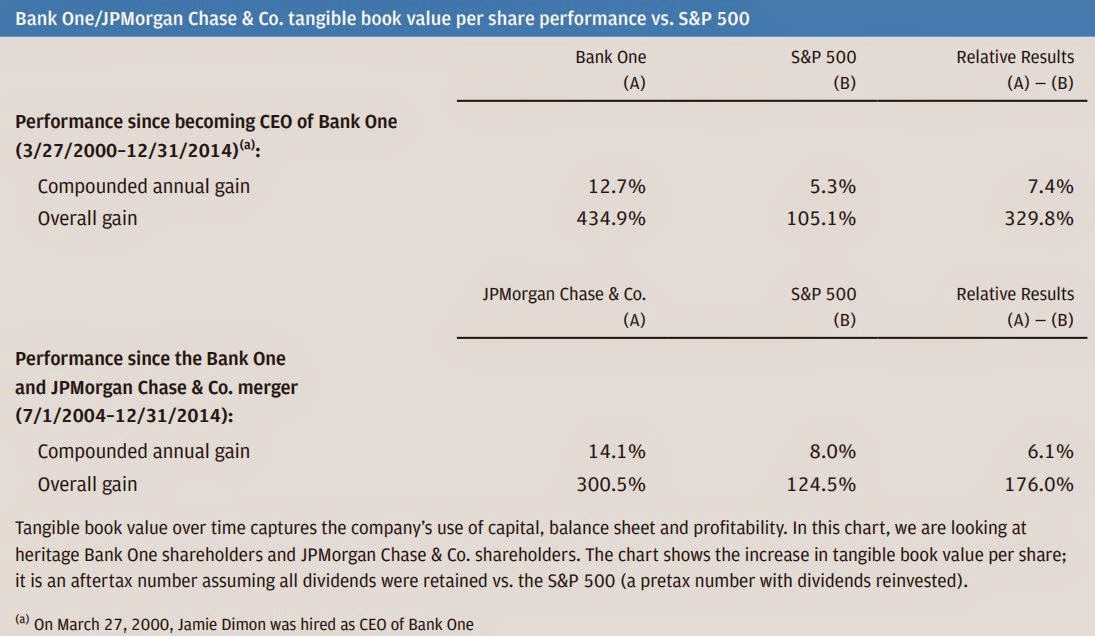 Since the merger, Dimon grew tangible BPS at a rate of 14.1%/year.  Again, this is not a perfect comparison but BRK and MKL grew BPS at a rate of 10.1%/year and 12.5%/year.  BRK and MKL are 10 years through December 2014, and both are BPS, not tangible BPS.  Again, keep in mind that the merger happened in 2004 so this period includes the financial crisis.  It's crazy when you think about how well JPM has done.

Stock Total Return
Of course, what really matters, though, is total return to the shareholders.  And here too, JPM has done really well over the long term. 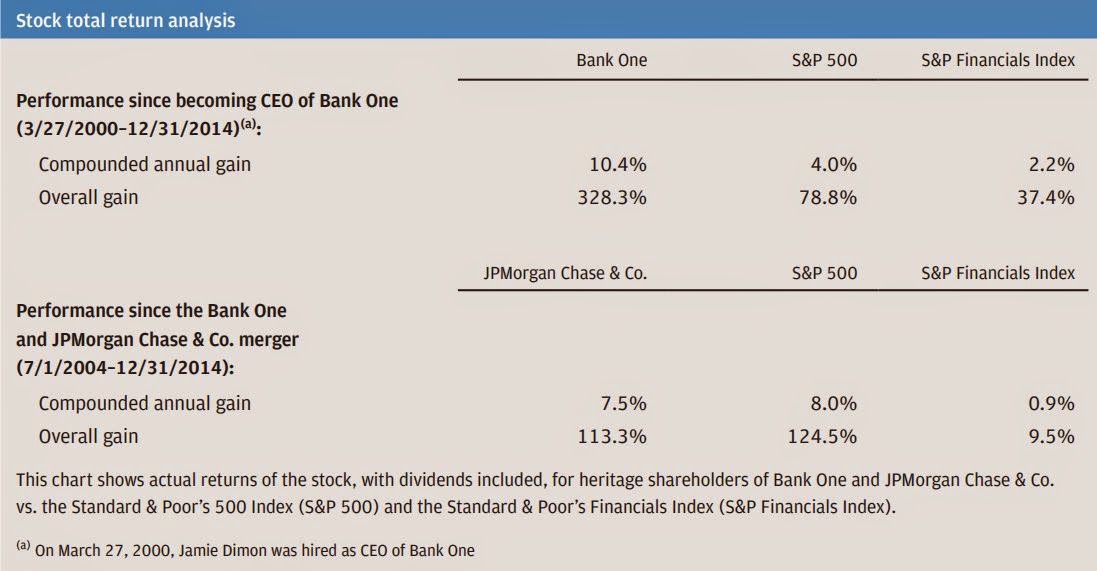 Better than BRK?!
I actually didn't know this until I just calculated it, but if you owned Bank One when Dimon became the CEO and held your shares through the merger and through December 2014, you would have done better than owning BRK over that time period.

And you don't even have to look at the comparison with the S&P Financials index.  A more direct comp would be Citigroup and Bank of America, but we don't even need to get data to see that JPM did better.

Dimon does note, though, that the stock has not done well recently:


However, our stock performance has not been particularly good in the last five years. While the business franchise has become stronger, I believe that legal and regulatory costs and future uncertainty regarding legal and regulatory costs have hurt our company and the value of our stock and have led to a price/earnings ratio lower than some of our competitors. We are determined to limit (we can never completely eliminate them) our legal costs over time, and as we do, we expect that the strength and quality of the underlying business will shine through.

He says that the legal costs should normalize by 2016 implying that the uncertainty discount may go away around then.

Best in Class by Segment
Efficiency and returns are close to best in class in all segments.  Dimon notes that this was achieved while continuing to invest for growth. 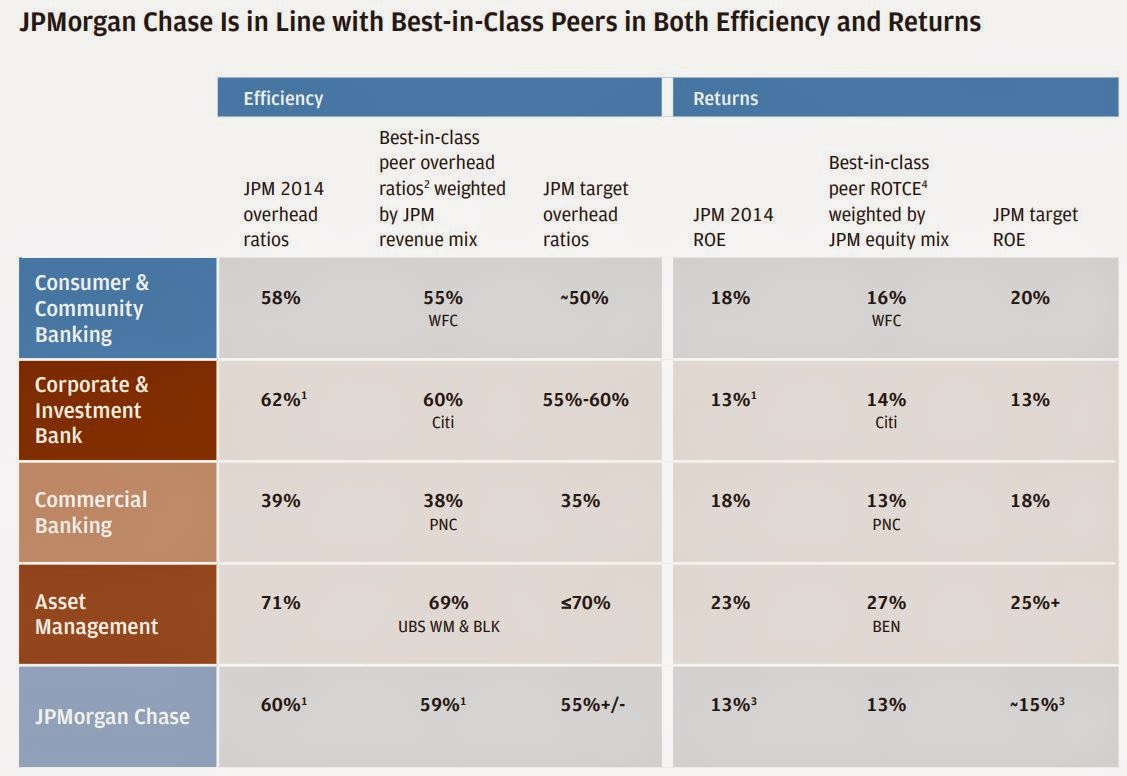 ...and while building up capital. 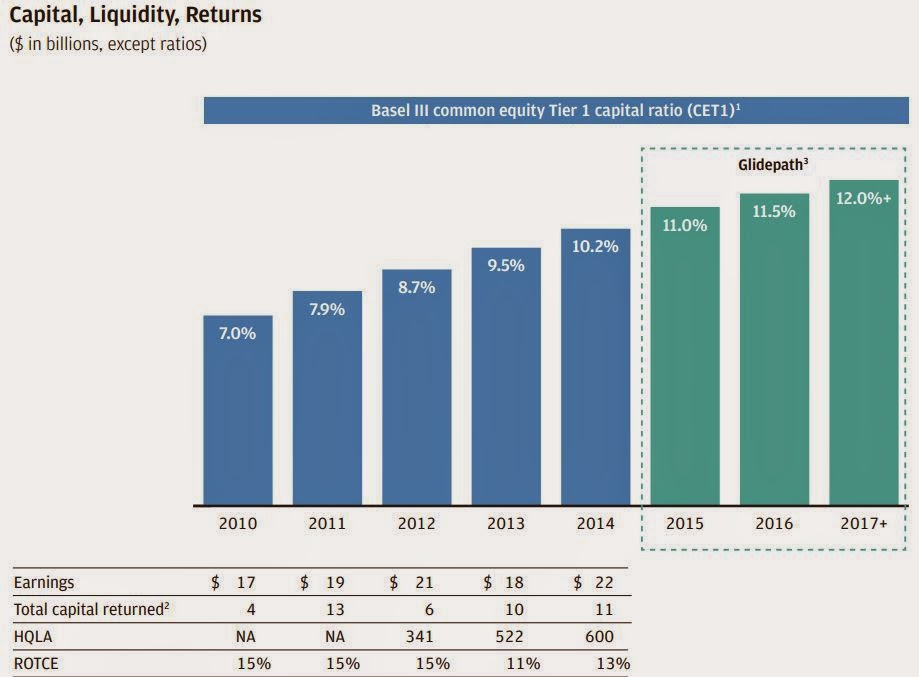 A lot of this stuff was in the investor day presentation, but it's worth showing again.   We tend to think of the big banks as having horrible customer service and those smaller guys with coin/change counting machines and no-bullet-proof-glass-so-gets-robbed-all-the-time smaller banks (that call their branches stores) are popular.

But the gap seems to be closing. 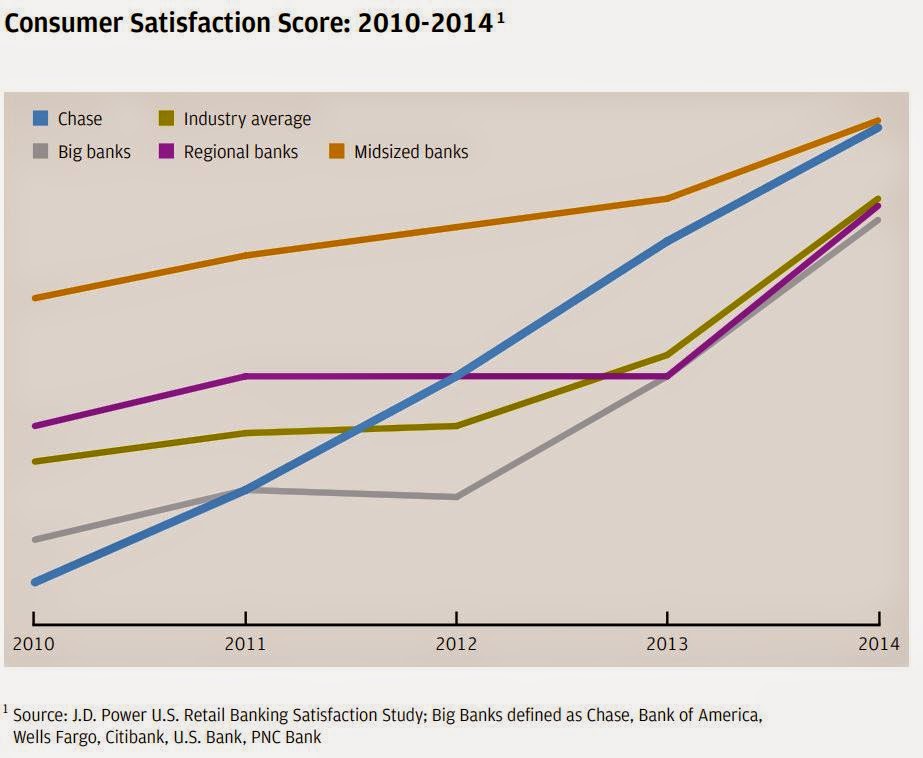 No Split
And here's the part about the value of JPM as it is.


Our mix of businesses leads to effective cross sell and substantial competitive advantages. We are not a conglomerate of separate, unrelated businesses — we are an operating company providing financial services to consumers, companies and communities

A conglomerate is a group of unrelated businesses held under one umbrella holding company. There is nothing wrong with a conglomerate, but we are not that. In our case, whether you are an individual, a company (large or small) or a government, when you walk in the front door and talk with our bankers, we provide you with essential financial products, services and advice. We have a broad product offering and some distinct capabilities, which, combined, create a mix of businesses that works well for each of our client segments.


I don't want to cut and paste everything here, but he goes on to talk about how there are some things that only big banks can do and smaller community banks can't.  Things only global institutions can do etc.   Also, he talks about how big is not always more risky.

CCAR
And there was an interesting discussion on the Fed's stress test.  Dimon thinks that JPM will do better than what the test results imply.  I'm gonna paste that because it is very interesting:


The Federal Reserve’s Comprehensive Capital Analysis and Review (CCAR) stress test is another tough measure of our survival capability. The stress test is good for our industry in that it clearly demonstrates the ability of each and every bank to be properly capitalized, even after an extremely difficult environment. Specifically, the test is a nine-quarter scenario where unemployment suddenly goes to 10.1%, home prices drop 25%, equities plummet approximately 60%, credit losses skyrocket and market-making loses a lot of money (like in the Lehman Brothers crisis).
To make sure the test is severe enough, the Fed essentially built into every bank’s results some of the insufficient and poor decisions that some banks made during the crisis. While I don’t explicitly know, I believe that the Fed makes the following assumptions:

I believe the Fed is appropriately conservatively measuring the above-mentioned aspects and wants to make sure that each and every bank has adequate capital in a crisis without having to rely on good management decisions, perfect models and rapid responses.

Finally, and this should give our shareholders a strong measure of comfort: During the actual financial crisis of 2008 and 2009, we never lost money in any quarter.


Bullish Long Term
And as usual, Dimon is bullish for the long term outlook of JPM's businesses.   Some of the long term macro drivers are: 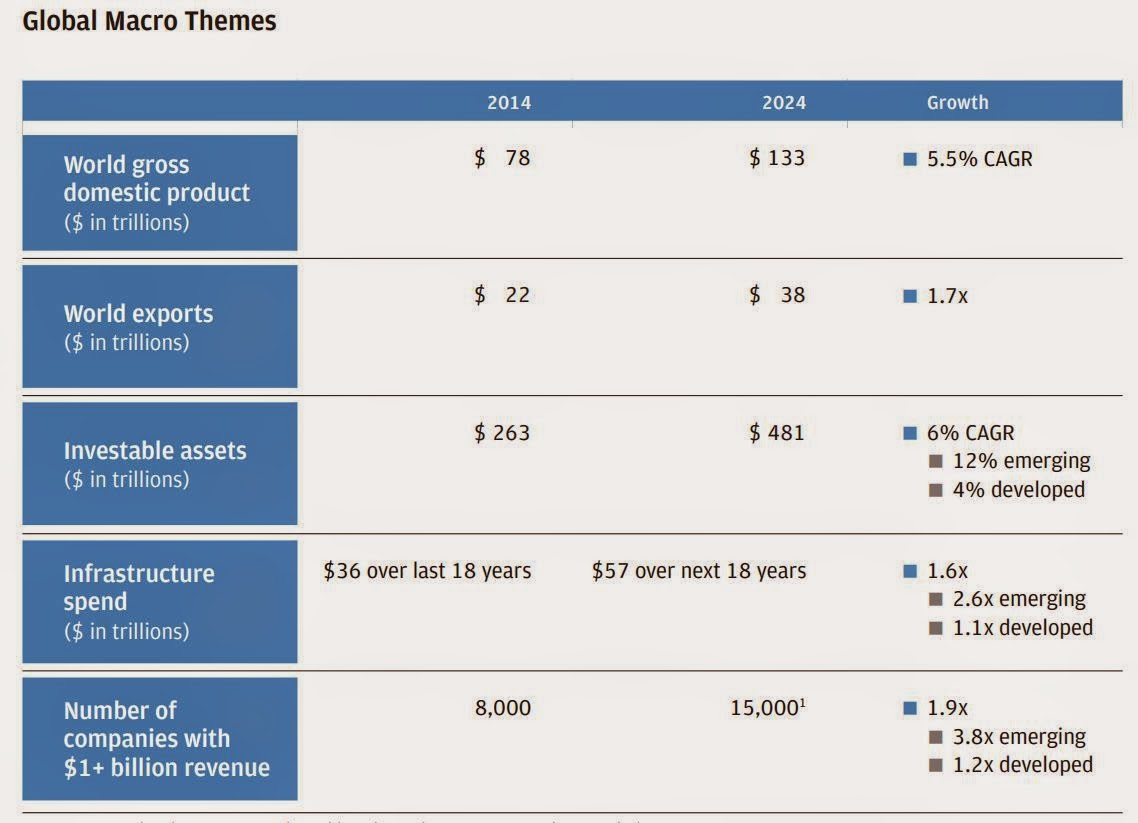 No Split Part 2
Earlier in the report, he talked about how the JPM business model is driven by the needs of the customer, how size does not equate to risk, how large banks serve important needs (global, large clients etc).

And later in the report, he addresses the investor calls for a split-up:

Price/earnings (P/E) ratios, like stock prices, are temporary and volatile and should not be used to run and build a business. We have built one great franchise, our way, which has been quite successful for some time. As long as the business being built is a real franchise and can stand the test of time, one should not overreact to Mr. Market. This does not mean we should not listen to what investors are saying – it just means we should not overreact to their comments – particularly if their views reflect temporary factors. While the stock market over a long period of time is the ultimate judge of performance, it is not a particularly good judge over a short period of time. A more consistent measure of value is our tangible book value, which has had healthy growth over time. Because of our conservative accounting, tangible book value is a very good measure of the growth of the value of our company. In fact, when Mr. Market gets very moody and depressed, we think it might be a good time to buy back stock.

I often have received bad advice about what we should do to earn a higher P/E ratio. Before the crisis, I was told that we were too conservatively financed and that more leverage would help our earnings. Outsiders said that one of our weaknesses in fixed income trading was that we didn’t do enough collateralized debt obligations and structured investment vehicles. And others said that we couldn’t afford to invest in initiatives like our own branded credit cards and the buildout of our Chase Private Client franchise during the crisis. Examples like these are exactly the reasons why one should not follow the herd. While we acknowledge that our P/E ratio is lower than many of our competitors’ ratio, one must ask why. I believe our stock price has been hurt by higher legal and regulatory costs and continues to be depressed due to future uncertainty regarding both.

As I was reading this section (which makes a whole lot of sense), I was wondering what the investment bankers at JPM were thinking when reading this.  Imagine JPM bankers consulting a company on a potential split to enhance shareholder value, and the client says, "...but Jamie said that we shouldn't let the tail wag the dog!".


Consequences of Regulation
Dimon says that the banking industry is much safer and stronger than ever before and he is in favor of a lot of the new regulations.  But he does caution that there are consequences to some of this stuff, and it's a very interesting read.

For example, the markets are already feeling it a little bit:


Some investors take comfort in the fact that spreads (i.e., the price between bid and ask) have remained rather low and healthy. But market depth is far lower than it was, and we believe that is a precursor of liquidity. For example, the market depth of 10-year Treasuries (defined as the average size of the best three bids and offers) today is $125 million, down from $500 million at its peak in 2007. The likely explanation for the lower depth in almost all bond markets is that inventories of market-makers’ positions are dramatically lower than in the past. For instance, the total inventory of Treasuries readily available to market-makers today is $1.7 trillion, down from $2.7 trillion at its peak in 2007. Meanwhile, the Treasury market is $12.5 trillion; it was $4.4 trillion in 2007. The trend in dealer positions of corporate bonds is similar. Dealer positions in corporate securities are down by about 75% from their 2007 peak, while the amount of corporate bonds outstanding has grown by 50% since then.

Inventories are lower – not because of one new rule but because of the multiple new rules that affect market-making, including far higher capital and liquidity requirements and the pending implementation of the Volcker Rule. There are other potential rules, which also may be adding to this phenomenon. For example, post-trade transparency makes it harder to do sizable trades since the whole world will know one’s position, in short order.

Recent activity in the Treasury markets and the currency markets is a warning shot across the bow Treasury markets were quite turbulent in the spring and summer of 2013, when the Fed hinted that it soon would slow its asset purchases. Then on one day, October 15, 2014, Treasury securities moved 40 basis points, statistically 7 to 8 standard deviations – an unprecedented move – an event that is supposed to happen only once in every 3 billion years or so (the Treasury market has only been around for 200 years or so – of course, this should make you question statistics to begin with). Some currencies recently have had similar large moves. Importantly, Treasuries and major country currencies are considered the most standardized and liquid financial instruments in the world.


He goes through a thought experiment on the next financial crisis which is very well worth reading. One of the issues is that regulation is driving some of the loans/financing outside of the banking system and that could cause problems in a crisis.  Banks will usually continue lending to support clients during a crisis, but non-banks may not, and this may exacerbate any crisis.

Anyway, that section is well worth reading as is the whole letter.

Oh, and here's a fun chart from the proxy statement.  We know Buffett is the cheapest laborer in the financial business, but Dimon comes pretty cheap too:

Conclusion
It's a pretty long report, as usual, at almost 40 pages, but it's really worth the read even for people not that interested in owning JPM.   You can't read a Dimon letter and not learn something.  So go ahead, what are you waiting for!?