The Loews 2014 annual report is out (OK, well, it's been out a while).  I was wondering how they would present their historical returns as they haven't looked good recently.  I've talked about how they have changed what they show in their annual reports for performance over time, and there was a discussion in the comments section in one of my L posts about how they use S&P 500 returns without dividends to compare long term returns.   Of course, this is not fair; you have to compare total returns.

We all know that L has done tremendously well over the long term.  Long term return figures are presented in annual reports in the past.

But whenever you see great long term returns like that, you have to wonder if most of the outperformance came in the early years.

Anyway, this is the sort of thing that L showed in past annual reports: 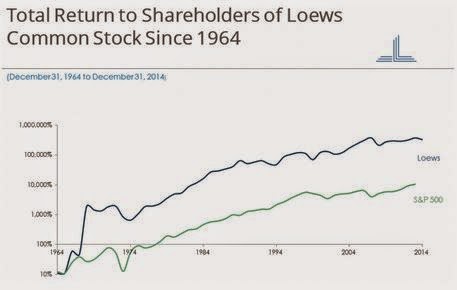 This is from their website and it shows how L has outperformed the S&P 500 index by a wide margin over time.

But the first thing you notice is that there is a large widening of the gap way between 1964 and 1969 (I am eyeballing this chart so might be off).

So the question becomes, well, how have they done since that period?

Actually, the more relevant question is how L has done since current management took over.  From their website, we know that this happened in 1998:

And in the 2014 annual report, that is what they decided to show: 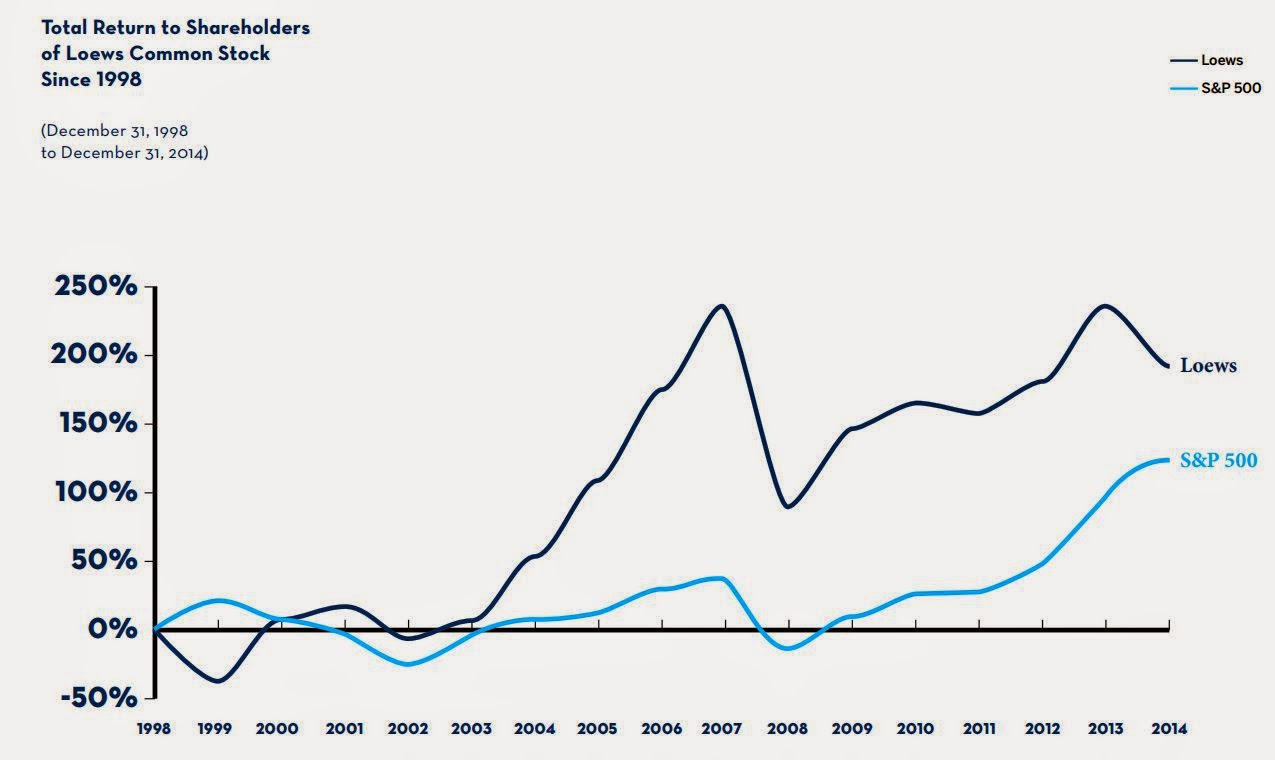 Judging from this, L's current management has done pretty well.    OK, maybe not better than BRK, but not many can do better than BRK.  I just compare everything to BRK because it's a good benchmark for asset allocating conglomerates; not that I expect everyone (or anyone) to outperform BRK.

And what is important to keep in mind, I think, is that this outperformance comes at what might be a cyclical low point for L (maybe not a low point, but certainly not a high point in terms of valuation or business cycle).  L has gotten clobbered in their DO and BWP positions.

I would still way prefer L to most mutual funds.  They are run conservatively and do outperform over time.  How many mutual funds can you name that has outperformed since 1998?

The performance recently doesn't look good partly because of the big oil boom in 2006 and 2007.  DO and L rallied a lot back then.  You can't really do anything about that (even though it would've been great if they sold DO!  But, OK, hindsight trading is easy.  They are long term investors).

If you smooth out that hump, L doesn't have such a bad trajectory from 2000 on.

Wow, check it out.  I actually didn't know this until I just did this, but L actually has outperformed both the S&P 500 index and BRK since the market peak at the end of 1999.   We can't really use the 2007 peak for "through-the-cycle" analysis because we know the energy sector was bubbled up (with crude oil at $150/barrel).

So that's kind of impressive.  And again, this is with a really bad endpoint in the data for L.

And here's a quick paste from the 2014 letter.  L bought back 4% of their stock, which is great.   This is what they do.  If they like L better than something else out there, they'll just buy L.  Why not? 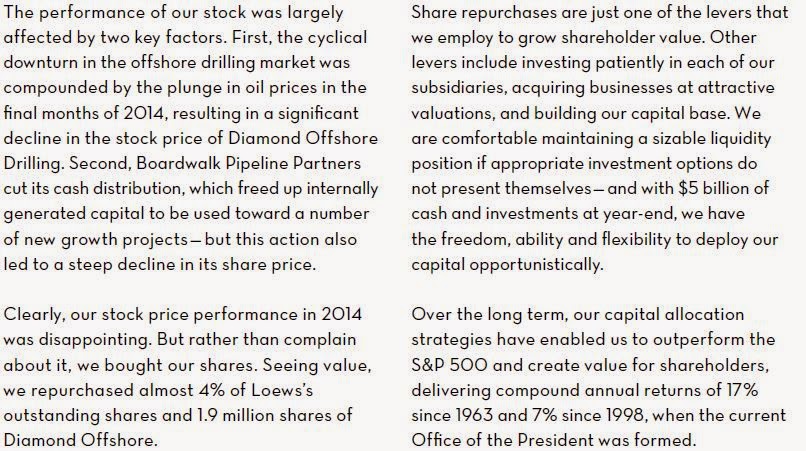 And here's a comment on what they're looking for.  It's a little different than what BRK and say, MKL and Y seem to look for.  There is a dash of the old LUK here:

I have no objection to that.  Distressed assets are great if it can be done right.  And knowing the L folk, they're not going to get into anything hopelessly and permanently distressed.

Conclusion
This is a simple post; nothing much new here.  But it was good for me to take a close look at some of these longer term return figures as I too was thinking that maybe L needs a little shot of adrenaline or something.

But I think this perception that L is lagging is largely due to the distortion caused by the huge energy bubble in 2007.  The stock has barely recovered levels from back then which makes it seem like they have done nothing in seven years.  The current down-cycle in offshore drilling and the oil price crash sort of reinforce this impression.

If you take a step back, though, and smooth out that big boom and bust, L seems to be doing really well.  Frankly, I was surprised that L has done better than BRK on a stock price basis since the end of 1999, a sort of stock market super-peak.   To me, 1999-2014 is a really good "through-the-cycle" benchmark too look at.

And importantly, L has outperformed the S&P 500 index (on a total return basis) since current management took over in 1998.