In Search of a Stock Market Bubble

So, (the sentence starts with "so" because this is a sort of ongoing discussion that's been going on here for years) I've been thinking about the overall market again.  Despite my telling people to ignore this and ignore that, I can't help it; sometimes I think about this stuff.  Well, it's OK to think about it as long as it doesn't lead to irrational decisions.

Anyway, as usual, there is a lot of talk of the market being insanely overvalued, median P/E's at post war records and all the usual.

I look at the charts and some are scary, but I still don't get the sense of a bubble.  I've seen the Japan bubble in 1989, the 2000 internet bubble and some others.  I see the Chinese bubble going on right now.  But I still don't really get the sense that the U.S. stock market is in a bubble.  Yes, there is a pocket of bubbliness, like in some parts of the tech sector (social networks, biotech etc.), but overall I just really don't see it.

Nifty Fifty 1972
I made a post just like this one two or threes years ago when people were saying the market is overvalued.  I looked up the P/E ratios of the Nifty Fifty stocks in 1972 to see what a real bubble looks like.

Here is what you were dealing with if you were investing in blue chip stocks back in 1972: 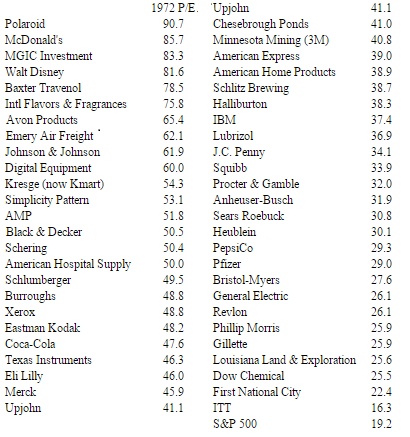 What is really interesting to me here is that the S&P 500 index P/E ratio at the time was 19.2x.  But look at the nifty fifty P/E ratios.  To me, this is what a bubble looks like.  These 'ordinary' companies were trading at higher P/E's than high growth social network stocks or fast casual restaurant chain today!

So, while everyone focuses on the big scary charts of market P/E ratios and whatnot, let's just look under the hood and see what's actually going on.

To be totally neutral, I just picked the Dow 30 stocks.  They are large caps, representative of major U.S. companies.  Despite the horrible structure of the index (price-weighted), it does correlate pretty closely with the S&P 500 index.  I plan on looking at the S&P 500 index in the same way in the near future. 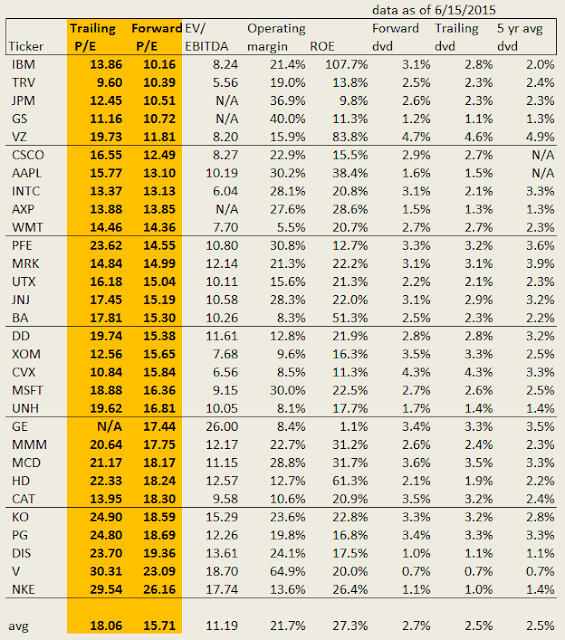 I just scraped this data off of Yahoo Finance.   I ranked it from cheapest up based on forward P/Es.

It's sometimes a good idea, when trying to figure something out, to invert.  To get comfortable being long something, let's see what it would feel like to be short it instead (just because it's not a good short doesn't automatically make it a good long, though).

People say that the market is tremendously overvalued.  Is the market so overvalued that I would be comfortable with a massive short position?  I just imagine myself with a big short position to see how I would feel.  What do I need to make money?  What can go wrong?  Is there really a big margin of safety in terms of valuation; are things so overvalued that it's a no brainer to be short?  At this point, I would not be comfortable short at all.  Sure, earnings for everyone might be bloated due to QE-infinity and budget deficits.  There are other reasons to be bearish, but I just don't see it from a valuation point of view.  The market is certainly not cheap.  But it's not so expensive that it's a no-brainer short either.

It's true that many of the Nifty Fifty were the growth stocks of the day.  So shorting those back then may not have been any easier than shorting Facebook or Amazon today.  In that sense, this is not really apples to apples.  I'm comparing the Nifty Fifty of 1972 to the Dow 30 stocks now; not fair.

But anyway, if you look slowly through the current Dow stocks, which ones are really overvalued?  I mean overvalued in a bubblistic sense?  I don't want to comment on each one, but most look pretty reasonable to me.  Most of the high P/E stocks (NKE, DIS, V, KO etc.) seem to be stocks that always had high P/Es, so don't feel like bloated P/Es based on a bubble.  Many others are just totally reasonable and some are really cheap (AXP, for example.  It has a close to 30% ROE, 12-15% long term EPS growth target, and it's trading at less than 14x P/E and less than 10x pretax earnings per share!).

Let's say you think the market should go down 50%.  I remember reading a comment by a hedge fund manager who said that he likes to buy stocks where if you doubled the price it would still be cheap and short stocks that if you cut the price in half, it would still be expensive.  That's quite a margin of safety built in!

If you look at the Dow stocks above, do I really think that the fair value of each of those is half the current P/E ratio?  I would say no to most of them.  OK, margins are bloated.  But just finger through the list slowly from the top to bottom.  Which ones are over-earning with bloated, bubbled up margins?  Honestly, I don't know.  Nothing jumps out at me as a candidate.  Readers here know that I am not a big long term fan of Apple as an investment, so I would argue that AAPL would be an example of possibly bloated, long-term unsustainable margins (and I know, I know, a lot of people don't agree with me on that and that's OK!).

But otherwise, it seems like a lot of them are actually under-earning.

Berkshire Stocks
As another 'sample', let's just look at BRK's portfolio, which in aggregate is down on the year so far. 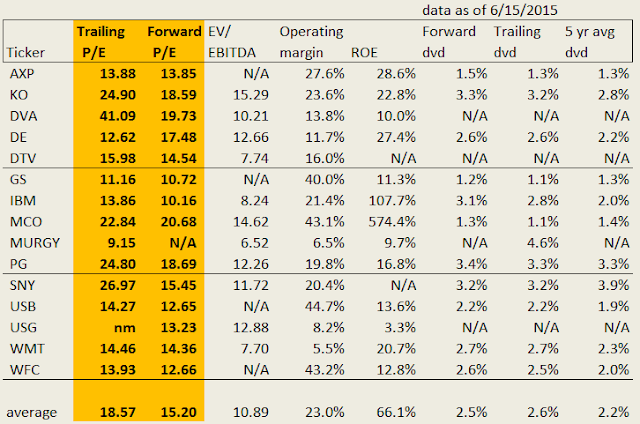 Here too, I come to a similar conclusion as the above (well, there are overlaps).  Nothing jumps out at me as needing a 'crash' or big bear market to correct.  I don't really see a stretched rubber band here either.  Most seem to be under-earning and I don't really see any unsustainably high margins.

Buffett Dogs Strategy?
So, looking at this, it's interesting to see that there are three stocks down a lot this year.  WMT, PG, and AXP are down -16%, -14% and -15% year-to-date respectively.  And as I said above, AXP has incredible margins and ROE and is trading under 14x P/E.  I know there are worries about competition; alternative payment systems (Munger said there is more competition now than before, but it's still a great business).  And the loss of Costco is certainly weighing on the stock.  This will cause earnings to be flat, but AXP expects EPS to start growing 12-15% again in 2017.

Conclusion
I've been saying this sort of thing since 2011 when I first started this blog; that the market is fine.  But sooner or later the bull market will end.  The market will tank and people will go back and read these posts and have a good laugh.  I know that will happen for sure.  But that's OK.

I'm not trying to predict anything, nor am I saying that we won't have another bear market again.  The market will go down for sure, 50% or more.  There is no doubt about that at all.  But I don't know when that will happen.

I am just looking at a bunch of facts to see what's actually going on.  Sometimes, it's hard to see what is happening just looking at big, macro charts; they can be misleading, like flying over a disaster zone in an airplane.  Sometimes you have to get on the ground and walk around to see for yourself.