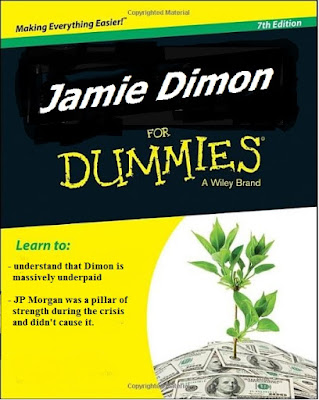 Oops, I did it again.  When I made the Missing Manual cover for Berkshire Hathaway, I told myself that it would be the last time I would do that.  Things like that can be fun the first time but can get pretty old pretty fast.

But, sorry, I couldn't resist this time.

When the news hit that 38% of shareholders voted against Dimon's compensation plan, I was stunned.  I was like, "What the...".

I didn't actually read the proxy firm reports so I don't know what it's all about, but I was surprised.   Then Dimon gets quoted calling investors "lazy" for voting according to proxy advisory firm recommendations.  After that, the press jumps in and calls Dimon "arrogant", even after all the trouble his bank caused.

Dimon is Underpaid
Just in case some were too lazy to read the proxy, here are some interesting charts from it.  I found it to be a pretty good proxy compared to many others with minimal explanation of CEO compensation.

Readers here know this because I post this chart all the time, but JPM has been an amazing performer since Dimon came on board.  The stock price has also performed very well since the 2007 peak. 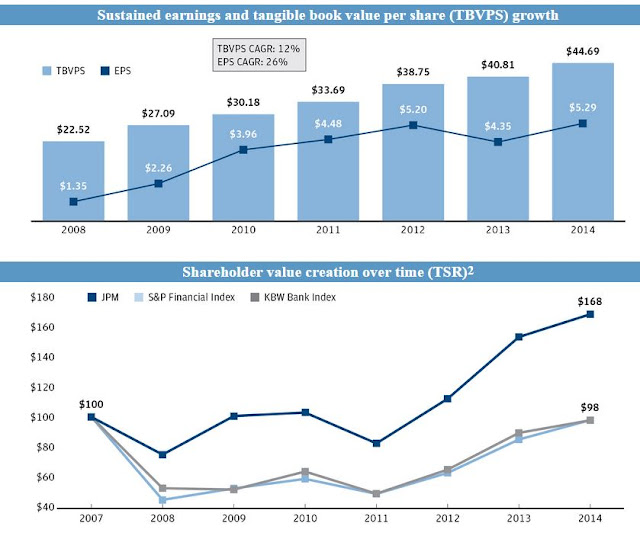 ...and for this great performance, Dimon gets paid less than any of the other large financial company CEO's.

...and over time CEO compensation has reflected performance.  I didn't necessarily agree with the pay cut in 2012 due to the whale trade.  JPM still made a lot of money that year.  I believe in paying for performance, and if the total performance was good, so should the pay.  If you run a fund and perform very, very well, you don't get a pay cut just because you made a mistake and one of your holdings went to zero.  That loss is already in the performance number.  I think the 2012 pay cut was driven (unfairly) by optics; the board had to do something to show that they were punishing Dimon for making such a stupid mistake.  To me, that was totally unnecessary.   But I admit there might have been some political value in doing that to appease someone.

Many CEO's make much larger mistakes and get paid more. 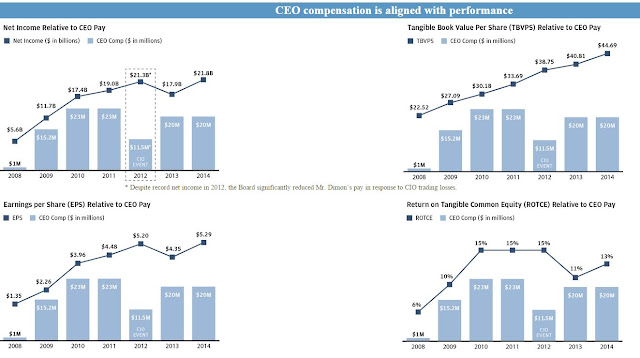 Proxy Advisory Nonsense
I don't read reports written by proxy advisory firms, so I can only guess, but it seems like they try to create some ideal model and cram everything into the model without much thought.  One of them a few years ago criticized the Berkshire Hathaway board saying that they lacked independence.  It's true that all the board members of Berkshire Hathaway are good friends of Buffett.  But if the Berkshire board is not acceptable to someone, then they just don't understand Berkshire Hathaway.

In general, I suppose the proxy advisories are right; the board has to be independent.  But for the companies I usually follow, if the CEO needs to be supervised by an independent board, then I don't want to be invested in that company.  This is not the best way to look at things from an academic, corporate governance point of view.  But that's the way I see it, particularly in the cases where I am invested because I like the CEO (in that case, I want him to have more power!).

But anyway, going back to proxy advisory firms, I really don't understand the business. If you are a professional investor, why would you depend on some outside advisory firm to tell you how to vote?  Do they not read the annual reports and proxy statements?  Are they too difficult to understand that you need advice from the outside?  I don't get it.  Maybe they own too many stocks (hundreds) that they can't keep track of each one so they need advice.  Maybe they are index funds.  There must be some history here that makes sense but frankly, I have never really given it much thought.


Dimon is Arrogant?
And then there is this backlash that after causing all this trouble, paying out $20 billion in fines and being charged with a felony (as a firm), bankers are still as arrogant as ever.  Well, first of all, if anyone has followed the crisis closely, JPM was one of the good actors.  Sure, they may have made some bad loans, even bad subprime loans.

But JPM stayed out of a lot of the problem areas (SIVs) and remained profitable throughout the crisis, not losing money in any single quarter.  When the financial industry was on the ropes, JPM stepped in to buy Bear Stearns and Wamu.

JPM got screwed on those deals, because most of the fines that JPM has paid since then have been for things that those two firms did in the past (which was not supposed to happen).

Most people (I notice this from personal conversations with a lot of people too) still look at the banking industry as one large entity, each bank as evil as the other.  To most people, there are no good banks and bad banks.  All banks are bad.  In fact, around here, most people think all big businesses are evil, bank or not.   (This is the sort of simplification/generalization that I think is really harmful, like all Muslims are evil etc.).

Individual Prosecutions
And by the way, about these Wall Street violations; a retiring prosecutor said on CNBC the other day that one thing he said he would do differently is to go after individuals instead of firms.  When the government goes after companies, the shareholders pay a big fine and the violators get off scot free  (actually, those most directly involved are probably fired.  But yes, they are free).

Frankly, I don't understand forcing banks to plead guilty to felonies in the recent foreign exchange case.   I think the dealers that were involved should be charged and put in jail, just like for violators of insider trading.  No big bank has ever been charged with insider trading (well, at least I don't remember any cases), but there have been employees caught insider trading and put in jail.  Those cases were clear cut, perhaps because they were done for individual gain and not for the gain of the company so it was obvious that the banks had nothing to do with it.

I think if employees were put in jail for violations, this would work better for reducing problems.  Nobody wants to go to jail.  I am still shocked at the amount of insider trading that was done in the hedge fund world recently, though.  I joined the business after the 1980's scandals, so my generation was terrified of getting caught insider trading.

If a Walmart employee beat up an annoying customer, that employee would probably go to jail.  Walmart would not be charged, unless it was proven that Walmart management encouraged such behavior, or maybe that management was negligent in hiring a dangerous person or something like that.  Why should a whole company or CEO be charged for things that some employees do?  If you own a cab company, no matter how good you are, some of your drivers are going to speed. Some of them are going to park illegally.  Some will talk on the cell phone while driving and crash.

Anyway, this is an interesting topic but beyond this single post.

Digression
And by the way, last month I put up a chart comparing stock P/E ratios to interest rates.  And then I showed the range of P/E ratios when interest rates were in certain ranges.  I was too lazy to actually put bands around the regression line since it's not a 'one button' option in Excel.

But I did eventually put bands around the regression line so I thought I'd put it up here.  It doesn't really change the conclusion very much, of course.

This is data from 1980 - 2014.  The data seems cherry-picked for an expensive time, but including data after 2007 and before 1980 would show that interest rates are even less meaningful (lower R2 etc.).  Since we are trying to figure out what higher interest rates would do to the market, it's fine. 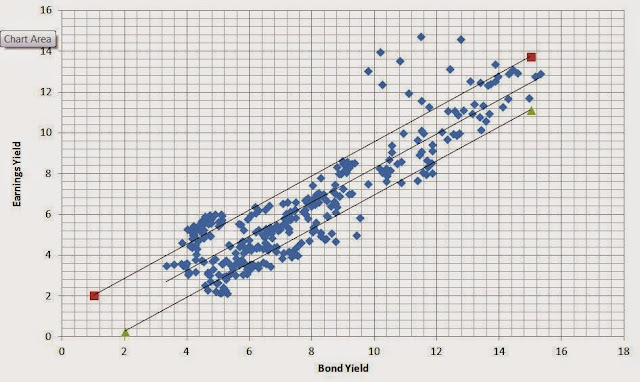 Those red squares don't mean anything. they are just the end points of the upper band.

I know there are arguments that margins are too high, that absolute valuations are more important than relative etc.

But what I am trying to show is simply that there is no reason to think that markets must go down just because interest rates back up some.  There will be some short term volatility, of course, as people adjust their portfolios.  If interest rates go up a lot, of course, the stock market can go down a lot too.

Valuation Fallacy
I think there is sort of a fallacy when looking at long term valuation charts.  People point to 1929 and 2000 and go, wow, every time the market gets over 20x P/E, there is a big bear market. And look, every time the market trades at 7x P/E ratio, a huge bull market follows.  And people conclude that a market with a 20+ P/E ratio must be followed by a bear market (in short order), and the best time to buy stocks is when the market is trading at 7x P/E ratio.

Well, buying only when the P/E ratio is at 7x and not owning stocks when the market is over 20x wouldn't have resulted, I don't think, in good performance over the long term.

This reminds me of that bank robber and gun fallacy; just because all bank robbers have guns doesn't mean that all gun-owners are bank robbers.

So What to Buy?
A couple of years ago, I said that Buffett would keep buying Wells Fargo up to 10x pretax earnings (see post here: Wells Fargo is Cheap!).   I said he would be buying it up to $50/share back then (the stock was at $35).

Updating this figure, WFC earned $6.00/share or so in pretax earnings in 2014.  So Buffett would keep buying WFC up to $60/share.   Keep in mind that this is not intrinsic value, but what Buffett would gladly pay for the business  (and sure enough, he bought more shares in the first quarter of 2015).

So this is not some valuation that is adjusted up for interest rates or anything like that.  I showed that Buffett often pays 10x pretax earnings even for listed stocks (and not just private businesses), and this has occurred over decades.

These are stocks you can buy now that Buffett has proven to be comfortable with at price levels that are consistent with Buffett's valuation levels that goes back a long time.

And these banks, I don't think, have unnaturally high and unsustainable margins (what many feel about the stock market overall).  In fact, banks seem to be underearning due to the still subdued housing market and more importantly, the unnaturally low interest rates.  So there you go; an actionable idea to go along with this long opinion piece.


Conclusion
Jamie Dimon is a great CEO and is massively, ridiculously and obscenely underpaid.   And you can have him work for you at a reasonable valuation too!