Yes, it's a tsunami. Tsunami of liquidity. A fiscal tsunami. Both at the same time. People seem baffled at the strength of the stock market; they keep saying the market is 'divorced from economic reality' and things like that. Others say this is a big bubble waiting to implode.
I don't mean to argue that the market is always right or anything like that, but the market is reacting to some massive, massive stimulus and liquidity injection. Some of that is bound to leak into the stock market. As I said earlier about  Covid-19, this is forcing governments around the world to try to offset the negative effects of the virus. And as usual, they are going to overdo it. And this, in turn, will lead potentially to a really massive bubble.
As of now, with S&P 500 forward P/E of 23, or whatever they say, it doesn't really seem all that bubblish. Too, the median P/E ratio of S&P 500 companies on a forward basis is around 18.5x vs. a 15.2x average since 1982, I think. So that is not that crazy looking either, given much lower interest rates now than most of this time period.
People say the S&P 500 forward P/E is as high as it was back in 1999/2000, but don't forget, interest rates were a lot higher back then. Also, the median P/E is much lower than that, which is again, just like 1999/2000. And if you remember 1999/2000, if you didn't own the bubble stocks, you actually did really well throughout the 2000-2002 bear market. It is very possible that this will happen again. Many of the frothy names can have large declines, maybe the S&P 500 index even goes down 50% or more, and people who didn't own the most expensive stocks might actually still do well. So, don't let people scare you out of the market with this talk of market P/E's. If you are happy with what you own and how they are valued, hold on and things should be fine (like it was in 1999/2000). 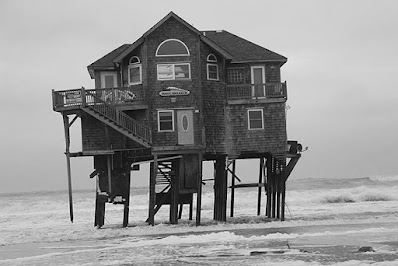 The Economists Go out -- The Psychologists Come In
I have already commented on the strange tendency of the supposedly forward-looking financial community so often to fail to recognize a changed set of circumstances until the new influence has been in existence for years. I believe this is why the man who attempted to forecast the course of general business was regarded as so important a factor in the making of investment decisions during all of the 1940's and much of the 1950's. Even today, a surprising number of both investors and professional investment men still believe that the heart of a wise investment policy is to obtain the best business forecast you can. If the outlook is one of expanding business, then buy. If the outlook is for a decline, sell.
Many years ago there was probably considerably more merit to such a policy than there could possibly be today. The banking structure was weaker. There was no assurance it would be shored up by the government in times of real trouble -- a process bound to produce a massive dose of inflation. There was no tax system of a type that can hardly fail to produce strong inflationary spending whenever business (and therefore federal tax revenues) are at abnormally low levels. No public opinion had crystallized to assure that whenever business levels dipped sharply, the government would take strong countermeasures to stem the tide. Finally, the industrial base was much more narrow. The large number of industries in today's complex economy that bear little relationship to each other in their basic characteristics probably assures that even without the actions of government, modern business recession would be somewhat less severe than its former counterpart. Some industries would be enjoying unusual background conditions enabling them to expand, while the majority might be in a declining phase. This tends somewhat to stabilize the economy as a whole.
All this means that a depression is of less significance to the investor than it was many years ago. It does not mean knowing what business is going to do would not be quite useful information to have. But having such information is not vital for obtaining magnificent results from common stock investments. Simple arithmetic should show this. When a stock market decline coincides with a fairly sizable economic slump as happened in 1937 to 1938 or 1957 to 1958, most stocks sell off from 35 to 50 percent. The better ones then recover when the slump ends and usually go on to new high levels. Even in the greatest slump of all time, only a small percentage of all companies failed, that is, went down 100 per cent. Most of these companies were companies which had had fantastic amounts of debt and senior securities placed ahead of their common. After one of the wildest speculative booms ever known, much of it financed by borrowed money, the average stock slumped 80 or 90 per cent. In contrast, when stocks rise over a period of years, even the most casual study of stock market history shows many figures of a very much greater order of magnitude. Compared to the temporary declines, usually of 35 to 50 per cent, that frequently accompany depressions, the outstanding stocks (those of the unusually well-run companies that have maneuvered themselves into growth fields) go up several hundred per cent, stay at these levels, and then go still higher. Many can be found for which a decade's progress can be measured in multiples of 1000 per cent rather than 100 per cent.
...
From the standpoint of obtaining results, I have noticed that investors who place heavy emphasis on economic forecasts in the making of investment decisions usually fall into one of two main groups. Those who are inclined to be cautious by nature can nearly always find an impressive sounding forecast that for quite plausible and persuasive reasons makes it appear that important economic difficulties lie ahead for the business community. Therefore, they seldom take advantage of opportunities when they present themselves and, on balance, these missed opportunities mean the economic forecasts have done them considerable harm. The other group are the perpetual optimists who can always find a favorable forecast to satisfy them. Since they always decide to go ahead with whatever action they are considering, it is hard to see how all the time they spend on business forecasting does much good.
More and more investors are coming to recognize the wisdom of making their decisions about common stocks largely on the basis of such outright business factors as appraisal of the quality of the management and the growth potential of the individual company's product line. These things both can be measured with a fair degree of preciseness and have a far greater influence on how good a long-range investment will be...

This book was published in 1960, and it is amazing as it still applies to this day; there are still people who think that predicting the economy accurately will lead to superior investment results.
So...
Anyway, this is a fascinating time to be living in. This pandemic is really terrible and I hope we at least find some sort of treatment to take death off the table. I feel this is the key to normalization rather than vaccines. Of course, a vaccine would be great, but it is probably unrealistic to expect one to come within a year. If we can figure out how to treat the worst cases, and this treatment becomes widely available, this would sort of turn Covid-19 into something like the flu.

But who knows, really.

As for stocks, there is certainly a lot of trading opportunities, but for us long term investors, I would stick to things that have secular growth potential. I don't really feel that excited about buying the dip on something in a long term downtrend. Not to say those can't be great trades. I would rather buy the dip on things in long term uptrends. If things are in secular downtrends but got a bump up due to this, then that's probably a great time to sell.

As for the market, it may seem like it's crazy, but keep in mind the amount of stimulus and liquidity injected into the system. It's not just lower interest rates. Also, people keep talking about overoptimism about the virus, but if you look at hotels, airlines etc., the market is clearly not all that optimistic about anything returning to normal any time soon.
Also, keep in mind that a lot of the big winners this year are making a lot of money; revenues are growing at incredible rates, profits etc. Other than the cloud players, look at COST, WMT, TGT etc. What is happening is that the smaller operators are suffering. Fast food is taking share away from the independent restaurants. As those are closed, if you want to eat out, you have fewer choices so you end up at CMG or QSR (Popeye's). A lot of the eating out money is moving to eating at home (groceries, again, COST, WMT, TGT etc...).
If airline and hotel stocks were making new highs, then I would think the market is nuts. But that's not what's happening. You have to sort of look under the hood to see what's going on, but of course, that's too much work for most! I get it.
Also, a lot of the revenues / profits that were not listed (small, mom-and-pop restaurants / stores) are moving to listed companies; as independents go under, the only ones left standing are the big ones, and often those are listed companies.
So there is a lot about this market that does make sense. This is not to say the market is always right, or that the valuations of each of these businesses at this point is correct. I am just pointing out that it may not be as crazy as some suggest. Airlines and hotels, REITS are down, and they are down big. Cloud players, stay-at-home beneficiaries are up big. What is so crazy about that? I don't know.
Also, I think there has been a lot of tech adoption from the never-adopters. I see all these posts about kids teaching their grandparents how to use a tablet, how to get on a Zoom call with family, how to chat on FB, Line, or how to use email. People (many of them seniors) who only used land-line phones and didn't know how to turn on their TV (well, I have trouble with that too with so many remotes and buttons...) are chatting with their kids / grandkids on Skype on their tablets. They are learning how to order things online.
A lot of this will be permanent. When things clear, many of these newbies will keep using their new devices and will continue to shop in their new ways. Not all of them, of course, and maybe not as often as right now. But this has caused an increase in this market for sure.
As for all the talk about how things will never go back to the way it was, that people will never go to conventions ever again, and that client visits will never happen again as Zoom calls work just as well, and offices will decline as people get used to working from home, I think, is rubbish. People always extrapolate what they see. Sure, it may take some time to get back to normal, but things will get back to normal, eventually.
Surely there will be some permanent changes for the better, utilizing things we have learned during this time, and that's great. But I wouldn't expect a lot of this stuff to be permanent by any means.
Posted by kk at 12:45 PM