So, with Buffett dumping airlines, JPM and not jumping into the markets in March, is he really all that bearish? His cash keeps piling up to the frustration of long time Buffett fans.

March Decline
First, I would have to say that the March decline was pretty quick. It crashed, and the market bounced back pretty quickly. Plus, what crashed are the stocks that are going to have a lot of problems. What rallied are beneficiaries. I would have loved to buy MSFT, GOOG, AMZN or whatever, but those didn't really tank all that much.
Plus, for a company like BRK, you would want to take advantage of any distress to get involved, but as Buffett said, with the stimulus package, the phone wasn't ringing all that much. There may be opportunities within each of the private holdings too, and we know there is a lot of pain in just about every wholly owned business at BRK.
Buffett Bearish?
A while back, I argued that this increase in cash does not necessarily reflect a bearish view on Buffett's part. OK, maybe it's not super-bullish. But it's not outright bearish, either.
First, I said the accumulated cash pretty much corresponds to the rise in float; since the mid-1990s, cash and fixed income investments always approximated the amount of float. Also, just because Buffett doesn't buy stocks doesn't mean BRK is not fully exposed; some of his former stock holdings are now wholly-owned subsidiaries. Just because they are no longer publicly listed equities doesn't mean we can't participate in intrinsic value growth of the business. We still own the equity. Same with outright purchases of other listed and unlisted businesses.
To show this, a while ago I posted how BRK is fully exposed despite the high cash balance. First, I added up the stock holdings, and then to that, I added the net worth of our subsidiaries; the railroads, utilities, and manufacturing, services and retail, and it all added up the the full value of BRK's shareholders' equity.
I showed that the high cash holdings of BRK is not a drag on future potential returns as it would be in a mutual fund. If a mutual fund had a high cash holding, yes, then it would lag in a bull market. Not so BRK.
Since manufacturing, services and retail is no longer itemized on the balance sheet, I can't do this, but if you net out the cash, cash equivalents and fixed income securities with float, you will see that what you have left is still equity ownership in the various businesses; the cash is not necessarily a drag on returns on this basis. Of course, if the cash was invested in higher returning securities, future returns would be higher.
But it's still fair to say BRK has 100% equity exposure.
Here are a couple of tables to illustrate this.
Liquid Assets = Float
First, check out the liquid assets (cash and cash equivalents plus fixed income investments) against float. This is just an approximation of float using the 2 or 3 items shown on the consolidated balance sheet so may not match what Buffett calls float, but it is close enough.
This ratio is on the far right of the below table labelled, "Liquid / float". Since 1999 or so, it's been remarkably stable at around 1. Someone asked about this at a recent annual meeting and Buffett said there is no relationship. It is a head-scratcher because it seems to match perfectly over time.
By the way, the cash and cash equivalents include only what is at the top of the balance sheet and excludes cash held in railroad / utilities (for simplicity, and most cash is in the insurance segment anyway).
Stocks to Total Shareholders Equity
Some insurance companies like MKL and Y use their equity portfolio to shareholders' equity ratio to show how much stock market exposure they have. This, for BRK, is in the column labelled "Stocks to sheq". It is amazing to think it was above 100% before the Gen Re merger. BRK back then was a leveraged play on Buffett's stock-picking skills, and any investment in bonds offered free incremental points on ROE above all that. No wonder why returns were so high back then.
Since then, the stock portfolio (including equity method investments) has averaged 52% of BRK's total shareholders equity.  Despite the huge cash holdings, note that the year-end figure was 62%, and at the end of the 2Q2020, it was 56% despite the portfolio taking a big hit this year. This is higher than the 52% average since 1998. I use the average since 1998 because the beast was a different animal pre-Gen Re.
So, this piece of evidence doesn't really show any bearishness on Buffett's part, or at least compared to the last 20+ years. 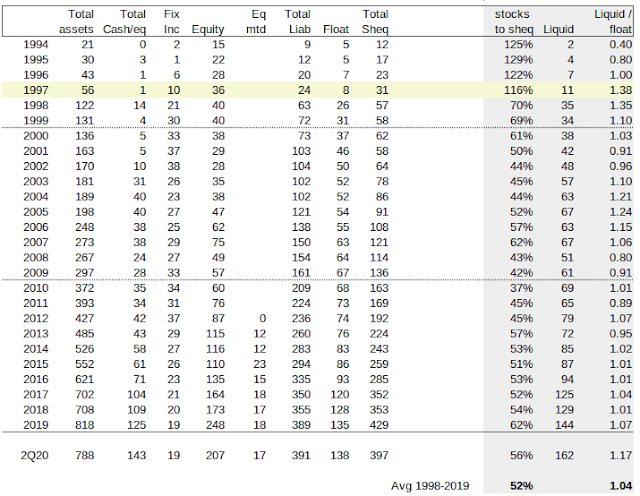 This next table shows some other ratios. Investment leverage is used by insurance companies too, total investments versus total shareholders equity. This is not really all that relevant for BRK because insurance is only one part of the business.
Investment Portfolio
But let's look at the portfolio in a conventional way. We will add the cash, cash equivalents and stock portfolio and see how that breaks down.
The column labelled "equity %" shows how many percent of total investments was invested in stocks (including equity method).
And, check it out! This also averaged 52% since 1998, and at year-end 2019, this was 65%, and was 58% at the end of 2Q2020.
Buffett bearish? Well, according to this piece of evidence, not really. Or, at least, not all that much more than in the past 20 years.
Maybe this is a little tautological but liquid assets as a percent of total investments is also below historicals, and also liquid assets vs. total shareholders equity is also lower: 51% average since 1998, but 34% and 41% at year-end 2019 and 2Q2020, respectively. 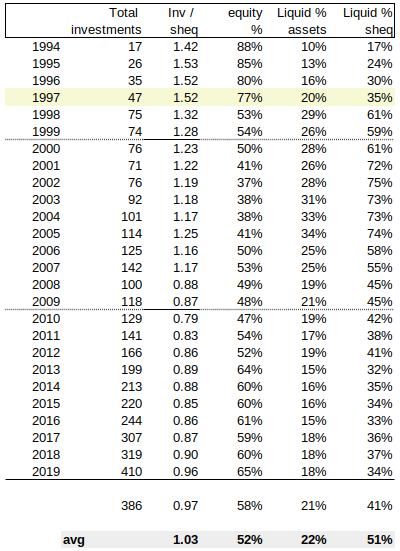 AAPL
By the way, for those who say Buffett has lost his touch, what do we call AAPL? At $470/share, the gain to BRK on this buy is $83 billion! This is not how much it's worth now, but how much BRK has gained on the position of around 250 million shares. That's as much as the total shareholders equity BRK had as recently as 2004, and also as much as the gains on all of the other holdings as of the end of 2019 (so before the recent decline in most of these holdings).
This is the table from the annual report, excluding AAPL. 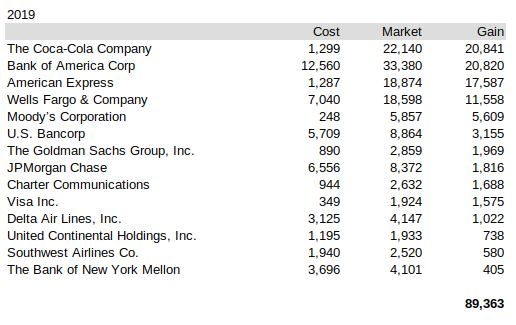 I admit I have been an AAPL naysayer for years. Part of this multiple expansion is probably due to a shift in the business model from a hardware, consumer electronics business to more services. I have no idea how this will pan out over the years, but I do notice more and more people living their lives in a very Apple-centric way.
Conclusion
People are frustrated that Buffett continues to accumulate cash. The cash just gets bigger and bigger and it makes Buffett seem more and more bearish. But as you can see from the above, the cash balance may grow, but so does BRK. So on a relative basis, the cash balance hasn't really been growing all that much. Judging from this analysis, you can't really conclude that Buffett is any more or less bearish than he has been in the last 20 years. But that won't stop people and the press from obsessing over this 'nominal' figure. Oh well...
Posted by kk at 6:57 PM