People always talk about L in terms of sum-of-the-parts and whatnot, and I just realized that I never really looked at their returns over time and in different time periods.  This may not be necessary as you know the Tischs' have created value over time as they usually illustrate in their annual reports, and if you buy L at a discount to it's intrinsic value, you can hardly go wrong.

But as I gathered up some information to create my own long term data, I noticed something.   First of all, here is what it said in the 2011 annual report:

"Over the past 50 years, the price of Loews common stock has grown at an average annual rate of approximately 14% compared with an approximate 6% growth rate for the S&P 500."

In the 2010 annual report, they made a similar comparison.  They compared the 50 year average total return from 1960-2010.  The S&P 500 annual total return was +9.6%/year and Loews' annual total return was +17.6%/year.   That's also an outperformance of 8%/year over 50 years, which is pretty astounding; of course this is not surprising as the two 50-year periods share mostly the same data points.

OK, so where am I going with this?

Pre-2007 Annual Reports
And then I get to the 2007 annual report and I notice that their long term outperformance chart/graph is a 25 year one.  (I've been reading these reports in real time for years, but I didn't really think about this at the time).

Here are the comparisons in the annual reports over time:

So the respective outperformance of L stock versus the S&P 500 index was:

Part of the reason why they switched to 50-years in 2008 is that it was the 50th anniversary of L's listing on the New York Stock Exchange, and I think it was meant to be a "looking back since listing" sort of thing.

But it also turned out to be a really timely shift.

Let's see what would have happened if the long term comparison stayed at 25 years instead of switching to 50 years.

(these returns are excluding dividends since that is how L presented the performance when they showed 25 year comparisons).

I hold the Tisch family in the highest regard, and they are the straightest, most honest people in business.  So I'm sure they're not trying to fool anyone.

But it is still a little annoying.  I know it's a little tricky to show long term performance when book value is not the best measure of performance, and the stock price performance too can be misleading over different time periods.

BRK and LUK both show their data going back to inception so we can quickly do our own calculations for various time periods and not be 'fed' return figures for periods that look good (I'm not accusing anyone of anything, but that was a pretty timely switch so you can't blame anyone for wondering!).  There will never be any confusion about long term performance with BRK/LUK because the data is all right there on page one.   The average return since inception is also right there.

It doesn't take a whole lot to do that (but it sure is a pain to assemble ourselves with the splits and all that!).    I understand there is a reservation about book value per share (may not reflect accurate value of the firm), and the stock price may be misleading at times too.

But if book value per share (which they used to show a 25-year chart of) and stock price is important or relevant enough to mention in the shareholder letter, then it may be good enough to present in an easily accessible form.

Recent Performance
So here's the data the way I've looked at other capital allocators recently.  I know book value isn't the best indicator of value for L as they have large, listed subsidiaries (that are consolidated and therefore not marked to market).  But as L themselves have demonstrated, the stock price and book value have tracked closely over time. 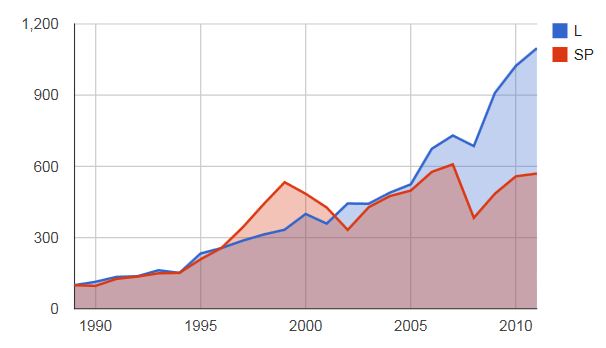 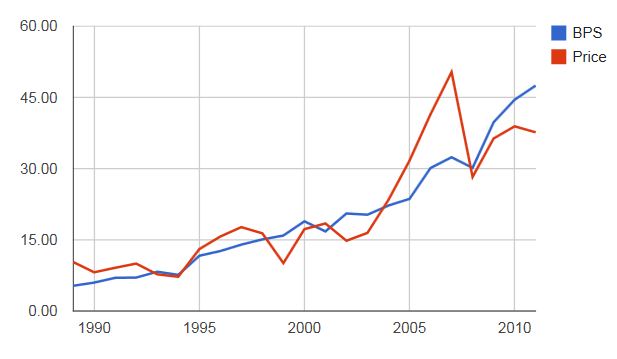 The long term stock performance is hurt by the fact that L was trading at close to 2x BPS back in 1989.  There may have been some value not reflected in book value like in 2007.  Back in 1989, CNA was trading at 1.5x book and CBS was probaby on the books for less than market value.  The 10-K's only go back to 1994 so I can't see what value there was not included in BPS back in 1989.

Even still, it's a little surprising especially given the 50 year outperformance figure that I have been taking for granted when shown to me in the annual reports.


Loews Valuation
Anyway, Loews is looked at usually as the sum of the parts.   Loews presents it nicely in their annual report and presentations.

First of all, I will say that a sum-of-the-parts analysis is fine and a one-time snapshot is enough as long as there is motivation to close that gap by management, management is competent in allocating capital and the parts are good businesses (or otherwise solid assets); you know the value is there and it will eventually be realized.

But it's also interesting to see, if possible, what the stock price did versus that analysis.

Here, I am going to do a quick analysis by adjusting the BPS of Loews going back.

There are basically three listed subsidiaries that make up the biggest adjustment factor to BPS; CNA, DO (Diamond Offshore) and BWP (Boardwalk Pipelines).  I will ignore Lorillard as that has no net impact on BPS adjustment over time because the value realized is reflected in BPS (it wasn't a spinoff; the IPO was a sale so L got cash proceeds and the spin-off was actually an exchange whereby L received L stock in exchange for LO stock, like a LO sale / L share repurchase done simultaneously).  LO would have had an impact in between the tracking stock IPO and the complete spin-off/exchange, but only on a mark-to-market basis in between.  Net-net, through time, the value is realized and included in BPS.

In the back of the 10-K's,  there is segment information and the assets are also broken down by segments.  In that section, you can see the shareholders' equity of these listed subsidiaries; what the book value of the holdings is on L's books, as well as minority interest (which is the portion not owned by L).

This is just another way to sum-of-the-parts this thing.  The advantage is that it leaves all other areas of L in the valuation at book.

Here is the data:

The equity of the subsidiary is the equity portion that L owns excluding minority interest.  So this is what the subs are carried at on L's books.  The P/B ratio is the valuation of the listed subsidiaries' stock.

If a stock is trading above book, we have to adjust the equity upwards to reflect a higher valuation.  If it is trading below book, then we deduct.

Doing this to all the listed subsidiaries results in the above table.  A total adjustment downward of $400 million is needed to mark these subs to 'market'.

With 397 shares outstanding at L, that's a $1.00/share downward adjustment.

Let's do the above exercise going back to 2001.  I went back and calculated all the p/b ratios for each year-end for each listed sub and did the above adjustment for every year. 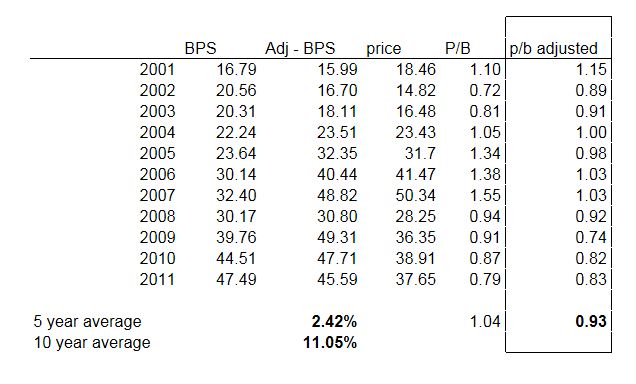 From the above table, we see that the stock price actually does track the adjusted BPS pretty closely.  The big divergence from book value back in 2007 was mostly due to the rise in DO stock.  And that also explains the poor performance over the five year time frame.

It is encouraging that the adjusted book value has grown at +11%/year over the past ten years, pretty much in line with the growth in book value (so maybe BPS is a good indicator after all).

The chart below shows how closely the stock price tracks the adjusted BPS.

Over the past ten years, the stock has traded at 0.93x this adjusted book value based on yearly data.  So it is fair to say that at $39/share,  L is trading cheaply and can be expected eventually to trade at the adjusted book value.  It looks like the discount started after the financial crisis, so this may just be part of the anti-equity sentiment (many financials and conglomerates like BRK are also trading cheap versus historical patterns).

Anyway, this is just one way of looking at the sum-of-the-parts.  I thought it would be easier to just adjust the book value like the way I did above.  I think it makes sense, but there may be factors that I am missing that makes this not such a good adjustment.  But it seems to track well, and with my very elementary understanding of accounting, it seems at least roughly right so...


Conclusion
So, I do like L and have a lot of faith in the management there.  They are as straight and honest as can be, and this could be a stock I may recommend to people who are going away for a few years on a mission to Mars and can't access the internet or otherwise buy/sell anything.  You would want to own a solid company with good management that can allocate capital well.  L would fit that bill easily.  I would bet on L over most mutual funds, the S&P 500 index etc...

Having said that, this is sort of a pain to analyze.  Sure, the structure is really simple on a one-time snapshot basis.

But we get different performance results depending on if you look at stock price, book value or adjusted book value.  I wish they would put a good summary page on the front like BRK and LUK does.  It would be really helpful.

I was one of those that just took it for granted that L has done well over 25 or 50 years but really didn't have a feel for how they have done over different time periods, and part of that is because it was such a hassle for me to try to figure out.

I haven't changed my mind about L; it's still a great company run by great people, but I feel like I understand it a little bit better now.