So that sort of changes the composition of the balance sheet.  At the end of December 2011, BH had cash and investments of:

Partly because of that, I spent some time at the SEC website reading through the filings at both companies; CBRL and BH.  The back and forth during the proxy contest last year is very interesting with both sides making interesting points and both sides having good presentations.

Whatever you think of either side, it's really interesting and educational to see what each side has to say.  All of this stuff is available at the SEC website for corporate filings, and the respective corporate investor relations websites.   Biglari set up a website specifically for his CBRL proxy contest and it makes for very good reading.

You can read all of Biglari's points in his letter to CBRL shareholders.  It is well written and easy to understand.  Again, I don't worry too much about who is right or wrong.  One learns from listening to both sides.

Unprofitable Capex
Anyway, one interesting point Biglari makes is that CBRL has spent a lot of money building new stores that increased revenues but hasn't really been profitable:

This is a very good point.  This is similar to Ed Lampert's point about capex in the retail industry and really cut down on capex.  In that case, so far, it doesn't look like it's working too well.  But let's not let one or two situations influence our decision.  I too tend to believe that corporations tend to spend money by 'inertia'.    There are a lot of motives that drive companies to spend or to grow at the expense of profitability.  (Some older blue chip firms obsessed with market share is a typical example).


Bad Traffic
CBRL has had some pretty horrible traffic trends in the past few years.  Below is a table from Biglari's letter: 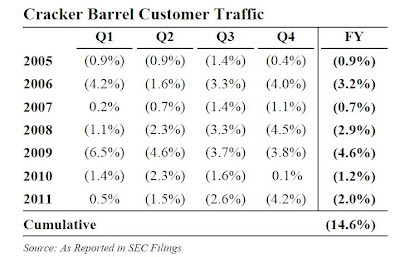 I don't think you can blame the economy for this as the economy was in a boom during 2005 - 2007. I too wonder about expanding stores when trends aren't favorable.  Many retailers will keep opening stores even if it cannibalized their existing base if they think they can get more profit dollars from the market.  But in CBRL's case, as is shown in the above table, this expansion in the face of declining traffic trends has not led to increased profits.

Biglari makes the case that this downtrend began when Evins retired and the current CEO Woodhouse took over.

I think the basic story of CBRL, as Biglari states in the above cut-and-paste text from his letter, is that if CBRL can stop building new stores for the sake of building new stores and focus on store profitability, it can really increase shareholder value.  Biglari says that if they can get per store profit back to the old levels, that would double the value of CBRL.


Incentive plan
So why is CBRL so bent on building new stores and expanding?  They have mentioned over the years that they target 1000 stores nationally.  Maybe this is what it's about.  They did have a goal of growing their store base by 5%/year but at some point they decided to slow that down.  I think they are going to start picking up again (plan to spend $50 million this year on new stores).

I also notice in the proxy that the long term incentive is based on "achieving long term revenue growth and profitability over performance period" (as well as stock price performance).
It doesn't say, "achieving long term revenue and profit growth", but revenue growth and profitability, which might explain why CBRL keeps spending money to open stores even when it doesn't contribute to earnings growth; as long as they are profitable, it doesn't matter. They need to grow revenues.

So on the issue of growing stores without growing profits, Biglari has a good point and the reason might have something to do with this long term incentive plan. 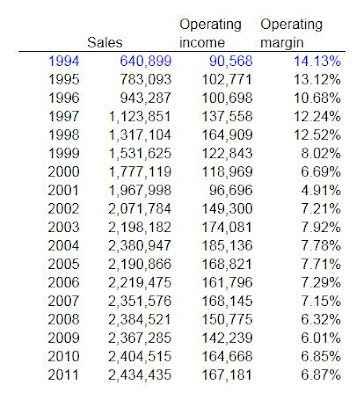 So you will notice that operating margins have been trending down starting with a big drop in 1999 (same store sales trend were down back then and they acquired Logan's Roadhouse in February 1999 which probably accounts for some of the margin drop too.  They have since sold Logan's).

From the previous analysis, we know that restaurant companies trade at around 16.5x p/e, so applying that we get a CBRL value of $132/share.   That's 150% higher than the current price of around $53/share.

But wait a minute.  How the heck does a company with sub 7% operating margins suddenly improve that to 12.5%?  That might seem quite a stretch.  The restaurant environment too is very different from what it was in the late 90s.  Surely there is much more competition.  Also, consumers are still pressed, unemployment high and food and energy inflation continue to put pressure on margins.  So it would be unrealistic to expect such a huge increase in operating margins over a short period of time.

Let's do the same exercise at 10% operating margins.  If CBRL achieves a 10% margin (which still might be aggressive), then the value of CBRL might rise to:

For another sanity check, I jotted down some operating margin levels from some listed restaurant companies to see if 10-12% operating margins are reasonable or possible.

It's difficult to compare since the business models are so different.  I tried to include companies that mostly owned their restaurants versus the franchise model like YUM brands or DIN (the old IHOP) which have drastically different models.

Anyway, just from looking at this, it seems that most restaurants have suffered declining margins over the years.  Of course, higher costs and high unemployment has really been a negative factor in the sector.  But looking at the table, it doesn't seem to me that 8-10% margins is impossible.  Again, we are talking about a big change in direction so margins can change dramatically in that case (as opposed to the same management just making minor tweaks here and there).

Off the top of my head, I remember other recent situations where companies got used to growing for the sake of growing and lost sight of what was important.  They stopped or slowed expansion to refocus their operations and boosted their margins.

The ones that come to mind are McDonald's and Starbucks.  Both of them have grown for many, many years and came to a point where they decided growth wasn't adding value to shareholders, and that focusing on improving operations at their store base was the right thing to do.  Walmart too, by the way, came to that conclusion recently although I don't see margin improvement there yet.

Anyway, here is a table of what happened to operating margins at McDonald's and Starbucks: 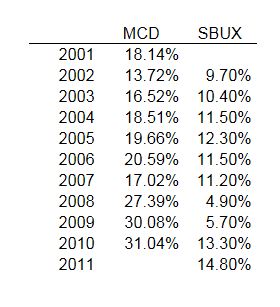 So McDonald's got stuck in the early 2000s, and decided to focus more on profitability instead of growth.  Their margins went from the teens to over 30%.  It's important to remember that MCD was facing a crowded market that was overly competitive ($1.00 menus etc...) and many thought that MCD has gone as far as it can go and that there wasn't much they can do.  SBUX too was in a simliar situation.  They had gone as far as they can go and saturated their stores (and markets with stores) with all kinds of products and there wasn't much more they can do to increase profits.  SBUX too, has done well by refocusing, recently hitting operating margins that are far higher than in their best years between 2004 and 2007.

So rethinking strategy and reallocating capital *can* make drastic changes, even at companies where  few people imagined anything can change much.

This is not to suggest that CBRL can make 30% operating margins or anything like that.  MCD and SBUX are both drastically different businesses.

But what I think it's important to remember is that things *can* change and slowing or stopping expansion to improve operations *can* work to boost margins.

Of course, this doesn't mean it's easy.

I just wanted to point out that it can happen and work, even when the rest of the sector continues to suffer (MCD improves while Wendy's, Burger King etc.. continue to not do too well etc...).

Biglari's Track Record
This is a "by the way", but this was included in one of Biglari's letters to CBRL shareholders.

These are his big recent transactions; it seems that he has done well.

But *if* they can make some changes, especially cutting back on growing while they suffer declining traffic and other things (like MCD and SBUX did), they may be able to boost margins.  If they do, this can certainly lead to a doubling or at least a higher stock price.

If that happened, from the above analysis, BH stock too can be worth as much as $700/share (CBRL doubles in price and SNS gets to 8.5% operating margin for the year, and then valuing that business at 16.5x p/e).

Again, this is if things go well at CBRL (and continues to go well at SNS).  I think there is a reasonable chance that both go well, but many things can obviously go wrong.  BH is not a Berkshire Hathaway or a Coca-Cola.  It is a small, concentrated investment dependent on the actions of a single person.   So many things can go wrong here.

This is something that I will watch closely with interest.  Biglari continues to buy shares even as he lost the proxy contest, so it will be interesting how this plays out going forward.   I do think the pressure is on, though, at CBRL and sometimes that's all that is needed to make some positive changes (it was encouraging that the shareholders voted down the poison pill, at least).