Is Amazon a Short? 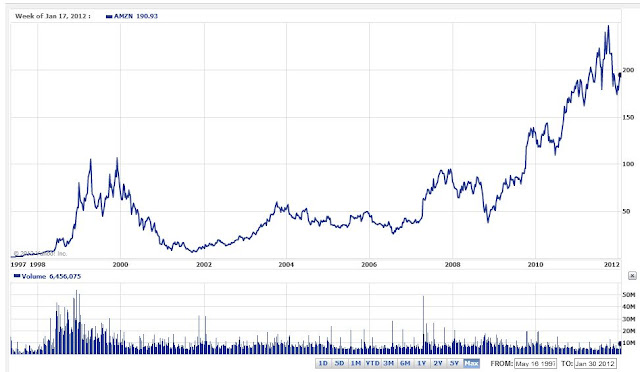 I hate to post a short idea on a day when the stock is down almost 10%; it's a bad time to sell or short something down a lot on short term news (earnings announcement).

But this is something I haven't looked at in a while so I decided to take a look (I actually started to look at this before the earnings announcement), and my opinion actually has very little to do with the results announced yesterday.

Anyway, what prompted me to look at this is that it is trading at what looks like 100x p/e ratio, which is very high.   Of course, shorting high p/e stocks in general is not always a winning strategy so this is not something I would typically look at.

But in this case, it looks a little interesting to dig a little.  I think part of the exuberance here is the halo effect from the iPad and Apple's success; the market may be reading that Amazon can grab some of the share and profits from Apple with the Kindle Fire.

This may be true.  Maybe Amazon takes some share from Apple and maybe the Kindle is a game changer and iPad killer (Even though the Kindle may be great, I don't think it's in the same market as the iPad, actually).

Before I go on, I should say that I am a huge fan of Amazon.  I have watched them grow over the years and really think Jeff Bezos is doing an amazing thing.  He reminds me of Costco's Sinegal, where he really wants to treat the customers right and go for the long term loyalty of customers over short term profits.  Bezos, like Sinegal, seems to be looking really long term.

One of my favorite things is the customer reviews where Amazon doesn't edit bad reviews.  Of course, this upset suppliers early on but Bezos took the side of the customer and allowed it.  This may have seemed short term bad, but it turned out to be a long term good as it enhanced the trust of Amazon.  (I once tried to post a highly negative review of a Dell product on the Dell website, but the review never was posted!  Not so unpredictably, reviews were mostly 5 stars.  I tried to post my 1 star review many, many times and it never got posted).

In a recent Wired magazine interview, Bezos also said that he would rather have low margins and a lot of customers rather than vice-versa.  Again, this is like an online version of Costco.

Free Cash Flow per Share
We all know that p/e ratio is not the be-all, end-all of stock valuation.  Bezos from early on has insisted that it's not earnings that's important, but free cash flow per share that they will try to optimize over time.

Great.  So then let's look at that.  Forget about, for a moment, the many reservations I have about AMZN's free cash flow calcuation.  First of all, it doesn't take into account stock-based compensation expense, which I actually think is a real expense.  Adding it back underestimates cost.  Second of all, since AMZN's free cash flow is simply cash flow from operations minus capital investment, it includes changes in working capital.  When sales are growing, an increase in accounts payable can significantly increase cash flows (as they receive payments from customers before they pay their suppliers).  However, this increase in accounts payable is not sustainable in a steady state situation; it only grows as sales grows.  So looking at that and putting a multiple on it is like capitalizing a growth.

A more sustainable, stable free cash flow calculation would be something like net earnings plus depreciation, amortization and some other non-cash expenses less capex.

Here is a table summarizing some key figures from their 10-k's:

Yes, yes.  AMZN is still growing rapidly and these free cash flow figures will grow over time.  Maybe they had upfront investment for future growth that will pay off in the future.  It is also not clear what the Kindle is costing and how that impacts recent year figures as it is suspected that AMZN is selling them at or below cost to increase market share.

The other figure that AMZN stresses is return on invested capital.  AMZN defines that as free cash flow (as defined above) divided by invested capital which is total assets minus current liabilities (excluding current portion of long term debt).

Again, it is not clear why that is and how the Kindle and other new business initiatives may be affecting this over the short term (for presumed returns in the future).


This is how the margins break out: 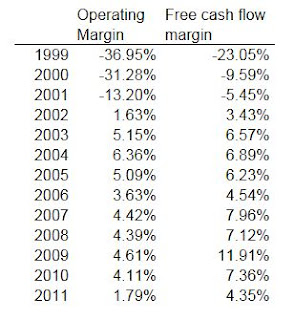 It seems that the operating margin for AMZN peaked out at 6.4% or so back in 2004.  This is understandable as they have been investing heavily and is entering new businesses which may have high upfront cost before future payoff.  Also, their increasing sales in areas outside of books and CD's may be negatively impacting margins.  It's not hard to imagine that sales in electronics and other general merchandise may not have the margins of books and CDs.  More on that later.

Also, look at the free cash flow margin.  This excludes stock compensation and includes growth in working capital, so again, I am a bit weary of slapping a multiple on that, but again, let's give them the benefit of the doubt.

Since the margins oscillate based, I suppose, on where they are in investing for the future and the payoff, let's look at the average margins over the past few years.   I will only look at the profitable years.

So from this, we can conclude that even if we adjust for short term margin effects, AMZN is not cheap.  Sales are growing strongly, though, so the question is if and when the margins start to improve.

There have been criticism that AMZN is just buying volume and building unprofitable business.  Let's take a look at some of the cost factors.

Why are Margins Declining?
One thing that people mention alot is that AMZN is increasingly depending on sales of electronics and other general merchandise, and less on books and CD's.   For example, sales of eletronics and general merchandise (EGM) grew +56% last year versus growth of +19% for the media business, and sales of EGM is now much larger than media (books, CDs etc...).

Let's see how the sales break down: 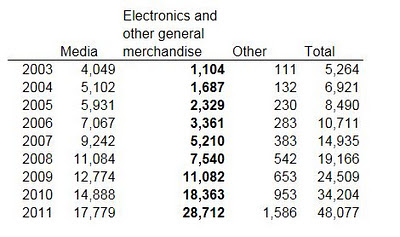 We can see how much EGM has grown in the past.  Almost 70% of the growth in the past five years has come from EGM.

So where is this hurting margins?  Do EGM products have lower gross margins?  The following table breaks out some of the costs: 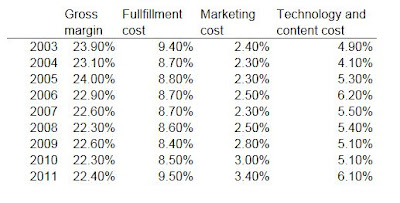 Gross margins are down a little but, but not really that much.  What is interesting is that fullfillment costs have gone up to 9.5% of sales recently, and marketing cost too has risen to 3.4%. This suggests that AMZN is indeed buying volume through marketing, which is not at all bad, of course, if they can make it back over time.  Fullfillment cost expense may have some temporary items but I don't know (they did say the Thailand flooding had an impact on the EGM business, but didn't mention anything specifically about cost, I don't think).  Otherwise it seems to have been stable at 8.5-8.8% or so.  (I will have to take another look; maybe I missed some one time factor in 2011).

But it looks like technology and content cost has been trending up too.  So even if some of these things are one time factors, it seems across the board.

The big thing, though, is the claim that AMZN is buying market share and volume with free shipping, Amazon Prime and things like that.

Below is the table of shipping revenues (shipping fees charged to customers) and shipping expense (what AMZN pays to deliver products to customers).

This table is really interesting: 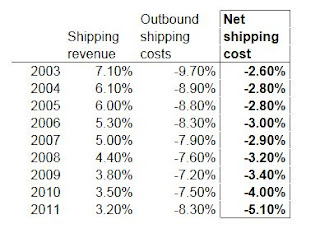 Conclusion
So what do we have?  We have increasing sales, but with declining margins, increasing net shipping and other costs.  Will AMZN be able to keep increasing sales and market share without increasing incentives like subsidized shipping? I don't know.  AMZN is betting that customer loyalty due to these incentives will allow them to make back profits later.

Will AMZN be able to increase margins back up without reducing these incentives?

I suspect that with the Kindle, more and more of the fullfillment centers will be dealing with eletronics and other general merchandise instead of books and CDs, which will eventually migrate to the Kindle and other electronic distribution.

At that point, will AMZN still have a moat?  (AMZN's moat was it's incredible distribution centers for books/CD's.  If this migrates to eletronic distribution, will this reduce their moat?).

Even if AMZN is successful with their online TV and movie distribution, how much value will that add to AMZN?  The entire market capitalization of Netflix is less than $7 billion.  So even if AMZN succeeded in taking ALL of NFLX's business, that implies an additional $7 billion in value to AMZN.   With a current market cap of $80 billion, that adds less than 10% to the value of AMZN.

So as electronics and general merchandise increasingly become a bigger part of AMZN's physical distribution business, can they do it as efficiently as they have done books? I have my doubts about that.

I still like AMZN, the company, and am a big fan of Jeff Bezos but at this valuation in front of what seems to be such major changes in the company going forward, unfortunately, I would have to say I am more comfortable being short this thing rather than long.

Email ThisBlogThis!Share to TwitterShare to FacebookShare to Pinterest
Labels: AMZN