So J.P. Morgan had their investor day yesterday and Dimon was pretty optimistic about J.P. Morgan and even the economy (I wasn't there).  He does see a lot of businesses so has a good feel for what's actually going on in the economy than economists that just sit around inputting data they get from the Labor department into spreadsheets.  He says that the economic recovery is pretty broadbased and many if not all areas of his businesses are growing loans, maybe with the exception of housing.

Anyway, here are some slides I took from the presentations from their website.

I already mentioned what a great investment opportunity JPM was last fall when it was trading at tangible book value.  You can read that here:  JPM at Tangible book


Book Value per Share Growth
As I said before, what is truly amazing about Dimon and J.P. Morgan is how they performed during the worst financial crisis in history.  Remember, J.P. Morgan was often cited as the first domino to fall in any financial crisis due to their huge derivatives book and exposure to the investment banking business.

But look at the chart/tables on this slide: 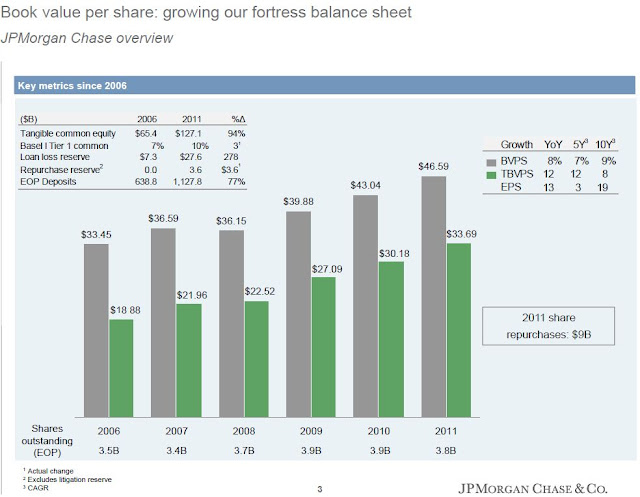 From 2006 - 2011, that includes the peak of the bubble and then the collapse in 2008-2009 and recovery which hasn't been completed yet.  JPM grew their book value per share at 7%/year during this time, and 9%/year for the past ten years.  Again, that *includes* the financial crisis!   Tangible book value per share grew 12%/year over this time period and 8%/year over the past ten years.

I know many bank critics will say that they just got bailed out so of course they did well.  As I said before, I don't think JPM needed the TARP money.  They took it, paid high interest, and then paid it back.

Did JPM need the financial industry to be bailed out to survive?  Well, if the whole system collapsed, then yes JPM might have gone down too.  But that's what the Fed is there to prevent and that's what they did.  I don't think there is anything wrong with that.

Other critics will say that JPM is or was insolvent but of course they didn't lose money because they didn't have to mark their books correctly.  Again, I would just say that Dimon is the best and most conservative manager out there and he *hates* mismarked books more than anyone.

And if it was just a simple accounting trick that prevented JPM from going under, then how come Bear Sterns, Washington Mutual, IndyMac, Citigroup, AIG and many others didn't use the same accounting trick to prevent taking losses?

So no, it wasn't an accounting thing or mismarking that allowed JPM to perform well.  It was just managed well.

Low Return on Assets?
I think one reason why JPM trades for cheaper than, say, Wells Fargo, is that their return on assets look much lower.

In the slide below, JPM shows that their return on assets is low due to their large exposure in the investment banking business, which is not a loan spread business; much of their assets will show a low return on asset. 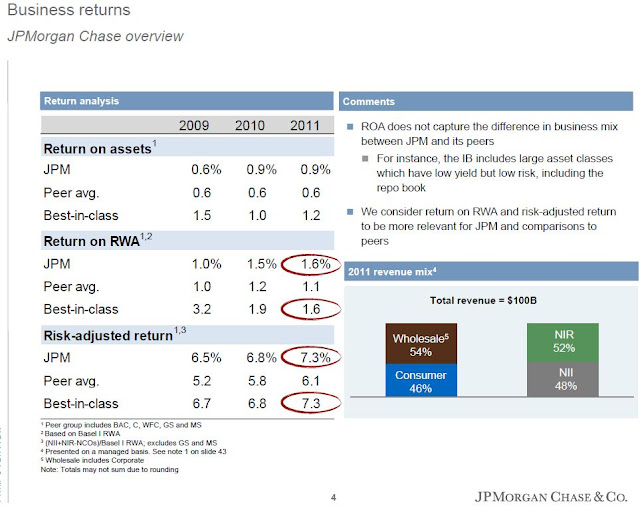 Adjusted for these differences, JPM looks much better.

ROE by Business Line
Also, ROE of each of the business lines look really great, and that's amazing when you think about the fact that even the great Goldman Sachs didn't do too well on this metric in 2011. 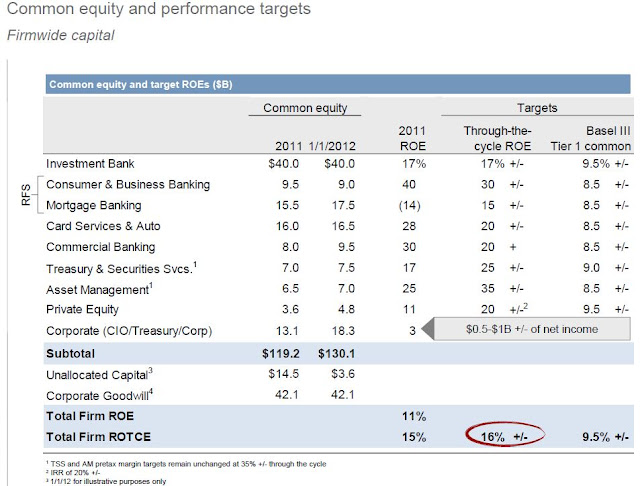 The investment bank earned an ROE of 17%.  Consumer and Business Banking earned an ROE of 40%.  It's truly amazing how profitable these businesses are in a time when financials aren't doing too well in general; loan growth is low or non-existent, housing hasn't recovered, the economy is still very slow to improve etc...

JPM continues to invest for growth, so there could be some tremendous operating leverage when more areas of the economy start to pick up, like housing.  They have really built up their mortgage business so if housing starts to come back, upside could be substantial in this area for JPM. 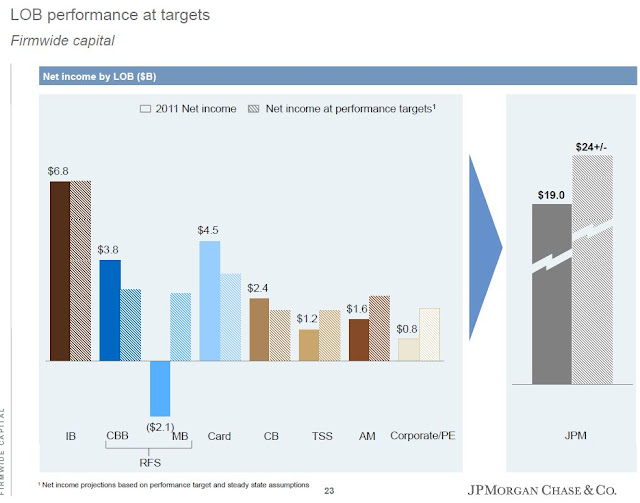 So JPM has performance targets by segment.  Assuming each segment achieves it's ROE target, the total net income to JPM would be $24 billion.  With 3.8 billion shares outstanding, that comes to $6.40/share in EPS.

Now hold that $6.40/share thought for a later section.


The following bridge, or walk or whatever you want to call it is how JPM can get to $24 billion net income.  It includes the normalization of high credit charge offs, mortgage related expenses and things like that but doesn't include any robust recovery in the economy or any such thing.  Growth inititiaves only add 4% or so. 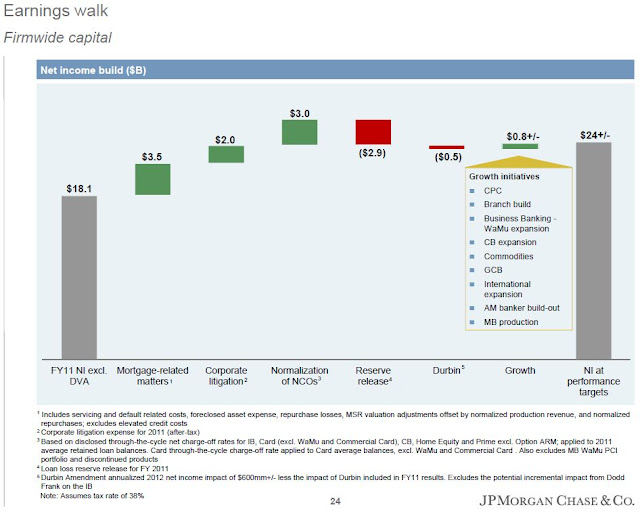 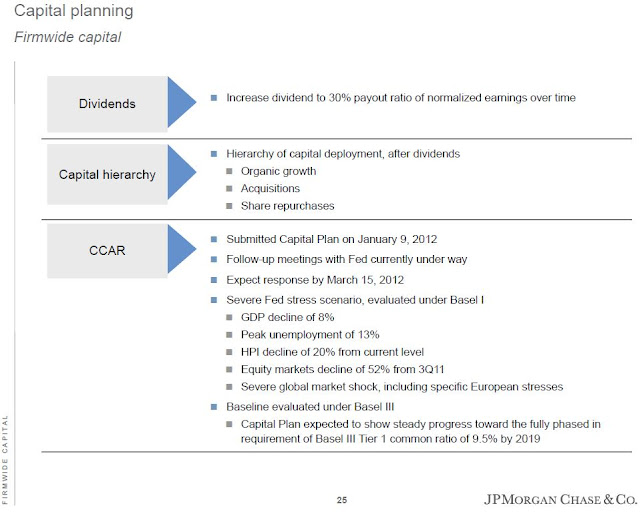 It doesn't look like acquisitions will be a major thing in the near term as Dimon seemed to suggest that it's off the table for now because he doesn't think it's politically doable now in this environment (where people are calling for breaking up the too-big-to-fail banks).

I think over the next few years, people will be surprised at what Dimon is building now.  Many banks are cutting investments to boost profits (like Bank of America?) as Dimon keeps spending to build branches and expand market share.  This may not be evident or visible now as housing is still in the dumps, so expanding mortgage operations won't really show results as much as when housing starts to pick up again.

Anyway, the other issue with the banks is the stress test.  It's amazing how well prepared JPM was for the last real crisis and they have always been ready for them.  So this stress test should be easy for JPM.  It is encouraging that even with the above stress test scenario of housing prices going down another 20%, unemployment rate going up to 13%, GDP going down 8% and stock prices going down 50% from their 3Q2011 lows that JPM will have no problem getting through it. 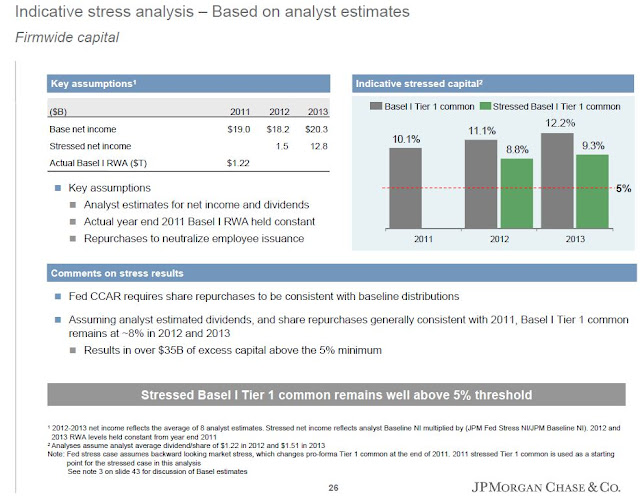 Incredibly, they would get through that crisis with a positive net income.  Now, that's a fortress business!

Conclusions
So what does this all mean?