So like everyone else in the financial world (OK, maybe not) I went through the Facebook S-1.  I don't normally look at these internet/technology businesses especially when it is really hyped and there is no chance that this thing will come out undervalued.

But I do think Facebook is an exceptional company so I decided to take a look.  They truly are onto something and this is way more interesting to me than other recent offerings such as Zynga, Groupon or LinkedIn.   That doesn't change, however, the fact that this stock when listed will probably not be a good buy.

That is pretty expensive, but not too bad given these internet business IPO's.  Also, we looked at AMZN recently and that's trading at 100x p/e without anywhere near the profitability of Facebook (FB).  AMZN has razor-thin margins while FB has an operating margin of close to 50% and a net margin of close to 30%.

So on that alone, one can argue that FB is completely reasonable at 100x p/e.  Why not?

OK, that doesn't mean I would be interested in FB at 100x p/e, though.  I am just observing that the market can support such a valuation.

Some Basic Figures
Anyway, FB is all over the place so I won't jot down all the details, but here are some basic facts about Facebook:

Industry Data
This is some data from the S-1 that I will jot down for future reference:

So What is Facebook Worth?
OK, so let's get down to the most important thing.  People seem to be focused on who has how many shares and how many billionaires will come out of this, how much in salary the CEO makes, what he is worth and all that.

But that stuff is not really all that relevant.  Neither are historic valuations of FB.  FB includes some fair value analysis to value the RSU (restricted stock units), but they lean hard on the market transaction based approach to valuation so they just use the secondary market traded price (in the December 2011 quarter, they used $29.73/share as the fair value of FB's class B shares).

That's not new information because we already knew the prices realized on the private secondary market.

Price-to-sales and p/e ratios on 2011 results are fine too, but this totally depends on growth rates.  How do you project future growth rates for FB?


Market Potential
So let's look at how much each monthly average user generates in revenues and profits for FB.  This isn't so hard as the data is all there in the S-1. 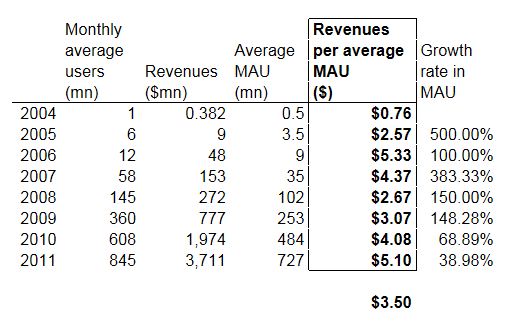 Let's cross check this with more recent quarterly figures. Quarterly MAUs and revenues are also included in the S-1 and here is the data:

What is the profitability of this revenue?

So it seems the profit margins are pretty stable at 50% or so on the operating margin and 30% or so net margin.   So let's use that for our valuation.

FB said that there are more than 2 billion internet uses in the world.  So let's say that FB succeeds in signing up as users every single internet-connected person on the planet.  That would take MAU up to 2 billion.

So even if FB achieves 100% penetration of all internet users on the planet, (at which point the projected revenue and profit growth at FB would be a lot lower), FB would still be valued at 33x P/E.  Cheap?  I don't think so.

From here we can take a big leap and assume that FB reaches the entire global population to the same extent it reaches the U.S. population (which is of course impossible given the low internet penetration rate today globally compared to the U.S. and other factors that will prevent FB from reaching as many users elsewhere than in the U.S.).

There are 6.8 billion people in the world today, and with a 50% penetration (FB reaches half the global population), that's 3.4 billion MAUs.

At $5.00/MAU, that's potential revenue of $17 billion.  With a 30% net margin, that's $5 billion in net earnings potential.  At a $100 billion valuation, FB is still trading at 5.9x revenues and 20x potential earnings!   That's with FB conquering the whole entire world!

For reference, below is the table of internet usage globally: 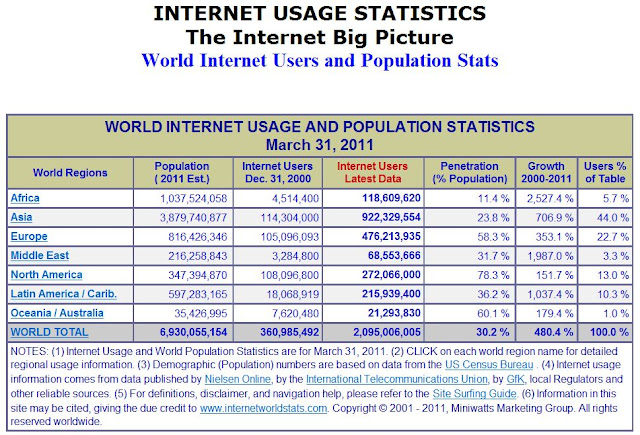 Conclusion
Like Amazon, I love Facebook and think it's a really great way to find friends and keep up with them.  I use it all the time.  But from the above analysis, it seems that FB is trading at 33x P/E ratio even if they penetrate every single internet connected user today (which is not a forgone conclusion) and at 20x P/E ratio even if they conquered the whole entire world today (which is impossible in the near future, of course).

This seems to suggest that the market at $100 billion valuation is pricing in *all* potential for FB, at least based on the current business model.

Does this mean that FB is a short?  No.  FB seems to be so hot that I wouldn't be surprised if it rallied for quite a bit even after getting listed at $100 billion or more.  The user base would certainly be potential investors and can take the stock price way up over rational valuation.  Shorting something like this is a good way to get steamrolled.

Also, keep in mind that the above analysis doesn't take into account things FB can do to increase revenues per MAU, new businesses, possible acquisitions etc.

The above maximum potential valuation only considers what FB is doing now and increasing revenues and profits solely by increasing MAUs.

I remember during the internet bubble; many analyzed Amazon and said that the stock price more than discounts Amazon's winning of the entire book and CD market.  The stock price was overvalued even if you assume Amazon takes 100% of those markets.   The flaw with that analysis is that Amazon went global, and went beyond books and CDs.

This is certainly possible with FB.  FB may expand into media and other areas.  They have created a great platform with a huge population of users.  There is probably a lot of potential to generate revenues from this.

However, Yahoo too has a lot of users but has failed to monetize much of their traffic so it doesn't mean the FB can easily increase revenues per MAU.

The above analysis is by no means the final analysis.  It's just one way to look at this stock with what we know now, a sort of sanity check.