Here's an interesting 'liquidation play' I've had for a while (paid $10/share or so a while back) but still might look pretty interesting.

There interesting point here is that most of these holdings are publicy listed themselves and Retail Holdings itself (ReHo) trades for way below the current market value of these entities.

The Singer stores in these countries are basically retailers that sell white goods, consumer electronics and even motorcycles.  The two big ones are Singer Sri Lanka and Singer Bangladesh.

Retail Holdings just announced their 2011 results and the stock popped 20% yesterday.  Their annual report in the past couple of years has included the calculation of the market value of their underlying holdings.

In the beginning of Reho's annual report is the mission statement:

"ReHo's strategy is to maximize and monetize the value of it's assets, with the medium-term objective of liquidating the company and distributing the resulting funds and any remaining assets to its shareholders".

Sum of the Parts
The ReHo annual report conveniently breaks down the value at Reho if you sum up the market value of the listed subsidiaries as of December 2011.   The valuation takes into account three main components of Reho's value:  The value of the listed (and other) subsidiaries, cash held at Reho and the SVP Notes (notes from an entity that ReHo sold assets to).

The market value of holdings attributable to ReHo at December-end 2011 was $157.1 million
The notional amount of SVP notes $26.8 million
and Cash of $2.9 million.

I did a quick check on the holdings as stock market data is available online for Bangladesh, Sri Lanka etc...

Using current prices, current holdings attributable to ReHo would be worth $128 million due to some weakness in some of these stock markets.   Adding up the other parts we get a value of $158 million.  And again, with 5.3 million shares outstanding, that comes to $29.80/share.

So even with the decline in value of the holdings, ReHo is trading at 70%, or a 30% discount to the value of the underlying assets.


Singer Asia For Sale
We know, because ReHo has said so many times, that Singer Asia is for sale.  There was an article in the Sri Lanka Daily News back on September 8, 2011 that said "Singer Asia for sale for U.S. $350 million".  The article sited a source that said Singer Sri Lanka is worth $200 million and Singer Bangladesh is worth up to $120 million.  It said that the other parts, Pakistan, India and Thailand are too small (to make a difference in total valuation).

But what makes this idea really interesting, actually, is the operating momentum at the companies.


Fundamentals
Here is the consolidated revenues of Singer Asia: 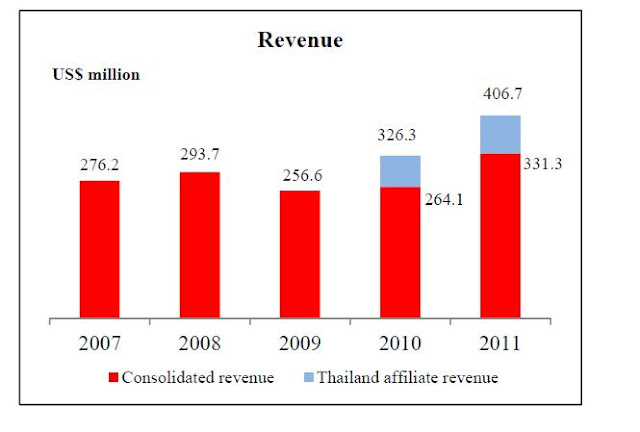 Thailand is in blue because it's not a consolidated subsidiary (equity method holding).  The sales amount attributable to Singer Asia was added back to show the underlying trend in the owned businesses.

You can see the revenues slowed or reversed during the global financial crisis and is gaining momentum as the economies recover.

From the above table, we see that $126 million of the $276 million in value is in Singer Sri Lanka.  Sri Lanka is not a particularly large country (population of 20 million or so), but what is really interesting is that Sri Lanka may be operating under it's own dynamic; the civil war ended in 2009 and economic growth has really taken off since then with back-to-back years of economic growth above 8%/year.   If this trend continues, this can really add some value to ReHo.  It may also interest some serious buyers for Singer Asia, either as a whole or parts of it.

Part of the delay in liquidiating Singer Asia/ReHo has to do with the global financial crisis, but if the economies start to normalize and this sort of operational momentum continues, then a sale at a pretty decent price is not a total stretch.

As of December 2011, I think Singer Sri Lanka was valued at 13x or so p/e ratio, so it wasn't expensive by any means.

I may post something about these separate subsidiaries in a future post as I think it is very interesting to look at.

Singer Bangladesh
This is the other large piece of Singer Asia.  Earnings-wise, it's not doing as well as Sri Lanka (as far as momentum is concerned), but sales seem to be growing at a nice clip.

Sales grew +5.4%, but if adjusted for a difference in accounting for local taxes, sales grew +14%.

So ReHo is certainly looking pretty interesting even if the value of the public holdings are down 20% or so year-to-date.

If this operating momentum continues, the value of the subsidiaries may increase and buyer interest may emerge to make possible a liquidation.

Other Issues
I have read some other analysis on ReHo as a sum-of-the-parts/liquidation play, but none of them really focus on what would happen if Singer Asia is not liquidated.  If that is the case, then the $2 million or so in compensation and other costs have to be capitalized and deducted from the value of the whole; the sum of the parts don't include a deduction in these expenses 'below the line'.

Also, I have an email out to ReHo, but I wonder about the license/royalty fees paid to SVP Holdings.  ReHo sold the rights to the Singer name back in 2003 or so and Singer Asia has to pay 1% of consolidated sales as a licencing fee to SVP every year.

I looked at the notes in the annual reports for both Singer Bangladesh and Singer Sri Lanka and I don't see an item for this royalty.

I was wondering if the listed subsidiaries in fact pays these royalties to Singer Asia in some way.  If not, then this 1% has to be deducted from the sum of the market values of the listed entities.

I will look further into this issue as it can have a large impact on the value of Reho (even though it would reduce the discount).

[ Since posting this, I have learned that Singer Asia does in fact get paid royalties/licences from subsidiaries and others and those payments received by Singer Asia are larger than the amount paid out by Singer Asia, so this is a non-issue.  (This comment added on April 2, 2012) ]
In a later post, I will take a long term look at Singer Sri Lanka and Singer Bangladesh from their annual report and will make an update post on the licensing fee/royalty issue if I get an answer from ReHo.

Risks
This is certainly an interesting play but there are risks, of course.  This a Curacao based company (not U.S.) and is only listed on the pink sheets so it is not very liquid.  I don't have a good understanding of Curacao corporate law or laws regarding shareholder rights (not that I have a good understanding of that in the U.S. either, but...).

I don't follow and haven't followed the economies/politics in Bangladesh and Sri Lanka so I can't say I have a good feel how these economies would react to an implosion in the Chinese economy, slowing Indian economy and things like that.

These companies are in emerging, if not frontier economies and things tend to be volatile in this area so I would not feel comfortable with too large a position here.

This idea is certainly not for everybody.

As usual, do your own work!

Email ThisBlogThis!Share to TwitterShare to FacebookShare to Pinterest
Labels: RHDGF