The financials have really exploded this year as unemployment and other economic figures continue to show some decent recovery.  Europe doesn't seem like it's going to blow up tommorow.   China seems to be going into a hard landing but China might be a laggard to what has happened in the U.S. and Europe in the recent past.  Ironically, China may recover if the U.S. continues it's recovery.

Anyway, I have liked the financials recently and they have done well, but some of these stocks are still pretty cheap.

Here's a quick look at two of my favorites.  (I also bought some Bank of America (BAC) LEAPs recently before the pop after the stress tests; I may post about that later but I thought this was a Greenblatt (Stock Market Genius book)-like trade)

Goldman Sachs (GS)
GS has come back strongly since last fall and is up to $126/share or so despite the very public and 'humiliating' resignation of a junior employee (I think it was more embarassing to the resigning employee than to GS; I immediately saw that as a sour grapes story).

But even after rallying so much, GS stock still trades at slighty above tangible book value.  Again, I tend to think that's incredibly cheap, barring of course another financial crisis.

GS didn't do quite so well in 2011 as they decreased their risk to wait for opportunities.  Some say that they have shrunk their book due to regulatory uncertainty, but during conference calls they always said that it was solely a function of opportunity.  They don't take a lot of risk when they don't see the opportunity.

I don't know why this table is upside down; I typically input numbers going down, but oh well...   It's not worth fixing.  I just pulled these quickly from their annual reports; they used to report only ROAE, and then both and now they only put ROAE.  I think that's because book value has grown to make goodwill a much smaller portion of book value so over time ROAE and ROATE will converge. 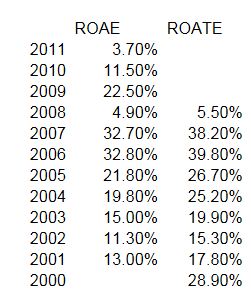 From this you can see that GS has done incredibly well since 2000 in terms of returns.  It is pretty amazing, actually.

Think about what happened since 2000.   We had the internet bubble collapse and the stock market went down 50% (NASDAQ went down 80%) and they earned double-digit returns throughout.  This period also included 9/11 and the Iraq and Afghan wars.

Right up until 2007, they earned very high returns and then the crisis came.  This was the worst financial crisis in history that took many banks and brokers down and GS came through it without losing money in any single year.

With this 'horrible' decade where the stock market went nowhere (which is misleading as it actually had TWO bear markets where the market went down 50%), GS had only two years where ROE was below 10% and didn't lose any money.

Since 2001, GS has only had two single digit ROE years and never lost money despite two big bear markets.

BPS for some key years were:

I know, I know.  Investment banking is dead and they will never make good returns ever again.  The Volcker rule and many others will limit what they can do.

But we've seen all of this before.  Dimon has said that this talk that banking is dead is ridiculous and that the industry is *always* changing; he's seen it before many, many times before over the decades.  Every time, people think it's all over.  But banks adapt and find new ways to make money.  This time is no different.

I also remember reading about Mayday and the Big Bang when stock brokerage commissions were deregulated.  That too was supposed to be the end of the investment bank as their 'fixed' commissions made them so much money in the past.   Oops.

GS will be much more adaptable than many other financial institutions since they don't have the bank branch infrastructure, long dated assets like insurance companies; they can move capital to where they can earn an acceptable return.   If there is no return, they will return capital to shareholders etc...

As I started to type this up, I had forgotten that I already made a JPM post about their investor day (look here).

But anyway, it's just a simple update so I'll keep going...

Like GS, JPM has done really well throughout the crisis even though JPM was supposed to be the first domino to fall (due to derivatives, leverage, investment bank attached etc...).

Return on equity by segment:

The return on equity by segment shows that most segments are doing pretty well except Retail Financial Services, which should recover as the economy recovers and if housing stablizes and employment continues to go up.

So despite all the naysaying about financials, I continue to believe they are cheap and will do well over the next few years.
Posted by kk at 3:09 PM