Goldman Sachs published a lengthy report recently saying that the stock market is a buying opportunity of a lifetime.  Of course, the bears are out tearing apart the argument piece by piece.  I've read the report and some of the very well articulated counter-arguments.

First of all, some are laughing at Goldman Sachs' report saying that it's a bit late in the party after stocks have doubled from the 2009 low.  Others treat the report as a total fantasy and has no basis in reality.

But it's important to remember that Warren Buffett has been saying the same thing for a while now and has repeated it again in his annual report this year.  If you asked Buffett if stocks is a good investment, he would tell you that it's a no-brainer at current levels.

Anyway, both sides of the argument have very good tables and charts to make their cases and they are very interesting reads.  I do like to read both sides of arguments.

But I think it's also important to remember that these bull/bear arguments have been going on forever.  At any given point in time there will be people calling for a bull market and others calling for a bear market.  And usually, the bear market proponents have the more convincing presentations.

But Does it Really Matter?
I don't want to brush off warnings of an overvalued market.  Japan in 1989 was certainly overvalued by any measure with just about everything overvalued.  In 2000, U.S. stocks were overvalued, but I would argue that the whole market was not overvalued.    There were plenty of reasonably priced stocks if you stayed away from technology, internet and some overvalued Buffett-esque blue chips (like Coca Cola).

We can spend a lot of time looking at these bull and bear arguments, adjusting our portfolios according to who we agree or disagree with, but I tend to think that's a bad idea.

This would be what people call "market timing" and I've wrote about how that's usually not such a good idea  (read here).

My argument is not so much that the market won't go down or margins won't go down or anything like that.    The main point is that if you own stocks that aren't expensive and don't have way above average, unsustainable profit margins, then one shouldn't worry too much.

If you look back at how wealth has been created in the stock market, especially if you are a value investor, much more value is added by stock-picking than by market-timing.

I admit this is not a fair argument as I will use as examples very successful value investors and most of us won't come anywhere close to achieving this sort of success.    But then again, we have to measure that against our potential to be able to time the market in and out better than, say, George Soros.  Just because we can't be great value investors doesn't mean we can become a better George Soros!

Buffett
Warren Buffett has a great historical track record.  There's no need to cut and paste any performance figures here.  But his great wealth was not created by timing the market; selling when the market gets expensive and buying back in when some academically calculated p/e ratio gets to a low level.

His wealth was created by picking great stocks, concentrating his investments in them and then holding on to them for a long, long time; not getting out when academics screamed, "The market is overvalued!!"

He ignored all such prognostications and focused on what he thinks he understands and knows.  It's very simple in concept but pretty much impossible for most 'normal' people to follow (greed and fear get in the way).


Greenblatt
Here's another example.  Anyway, I've posted this table before.  These are the performance figures for Joel Greenblatt's fund which was primarily long only (except for some special situations that might have required short selling, like stub trades).

He made 50%/year between the years 1985 and 1994.  This is totally astounding.  And what's really important to keep in mind here is that he didn't make these returns by buying stocks when the p/e ratio of the S&P 500 index was below x and then selling it when it got above y.  Nor did he achieve this by buying stocks when the profit margins of U.S. corporations were way below average and then selling them when they were way above historical averages.

How he made these returns is explained in his great book,  You Can Be a Stock Market Genius.   He evaluated each investment idea on it's own merits and put trades on when they made sense.  He didn't shut down and go to cash when he thought the stock market was pricey.

He just kept doing what he did regardless and kept making money.

He focused on what's important and what's knowable and ignored what's unknowable (direction of the stock market).


Superinvestors
I've used this table before too for a similar post not too long ago (read here).   These superinvestors (so named by Buffett in an essay he wrote in the early 1980s) also ignored all the warnings against stocks.  Interestingly, the warnings pretty much all came true and yet these value investors managed to do very well just buying cheap stocks as they have done before.  They stuck to what they understand, dealt with facts that were knowable and ignored the rest.

I don't have to list up all the problems that the U.S. went through from the late 1960s into the early 1980s.  It was a horrible time and you can imagine what the newspapers, magazines, investment strategists and academics were telling people about stocks at the time.

But look through the below table carefully, year by year and think about what the headlines looked like at the time, and think that these folks were just sitting in their offices doing what they always did.  They didn't use options to hedge their portfolios.  They didn't buy treasury yield increase warrants and pile into gold or gold stocks.  They just did what they always did. 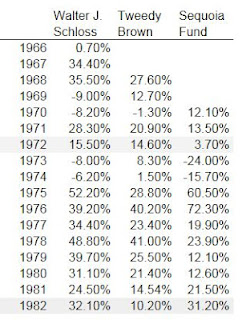 But What if You Just Owned the Index?
OK, so many people just own an index fund.  What about them?  They won't outperform and those valuation charts may be relevant to them as they can't avoid the overvalued sectors like Buffett, Greenblatt and the Superinvestors.

This is true.  But again, over time, the index does tend to do well as long as the U.S. economy keeps growing and companies continue to make money.

There was a lot of bear talk back in 1987 after the crash and projected equity returns were probably pretty low (due to the stock market having the highest valuations since 1929), but if you bought stocks in December 1987 (S&P 500 index), your total return for the next ten years would have been +18.1%/year.  And as I said, through December 2011, you would have had a total return of +9.5%/year.   (I tried to get total return figures from the high in August 1987 but couldn't find the data; the returns would obviously be lower but it still wouldn't be too bad even buying at the top).

Don't forget, back then, after the 1987 crash, people thought we were headed right into a 1929-1932-like depression.  In 1988, bookstores were filled with books about the end of American dominance etc...  Japan was going to take over the world.

So much for projections and forecasts.

I have to admit that I was also 'afraid' of stocks back then.  All those charts and bear arguments were very, very compelling.  They made a whole lot of sense and there really was no arguing against the facts displayed in the historical data (high p/e ratios etc...).


Conclusion
So anyway, these bull and bear arguments are fascinating to me and I love reading that stuff.  I also want to keep my eyes open for potential problems down the line.  I don't want to be a perma-bull and say stocks will always go up no matter what.  They won't.

But I do think that it's important to stay focused on what's knowable and not get too caught up in whether we are in a new bull market, old bull market, new bear market or old bear market.

Who cares?  These labels tend to be put on after the fact.  Nobody really knows beforehand, of course.

I still think the most important thing is that we understand what we own, their business models, their valuations etc...